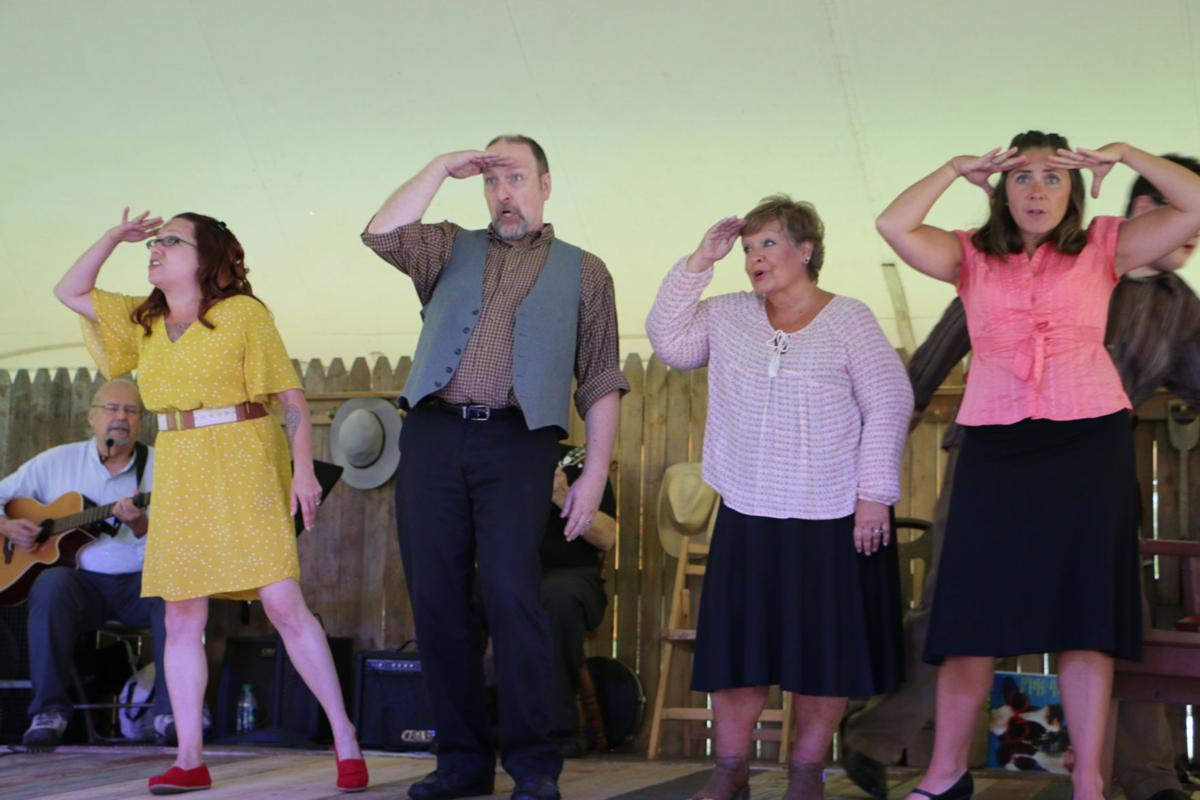 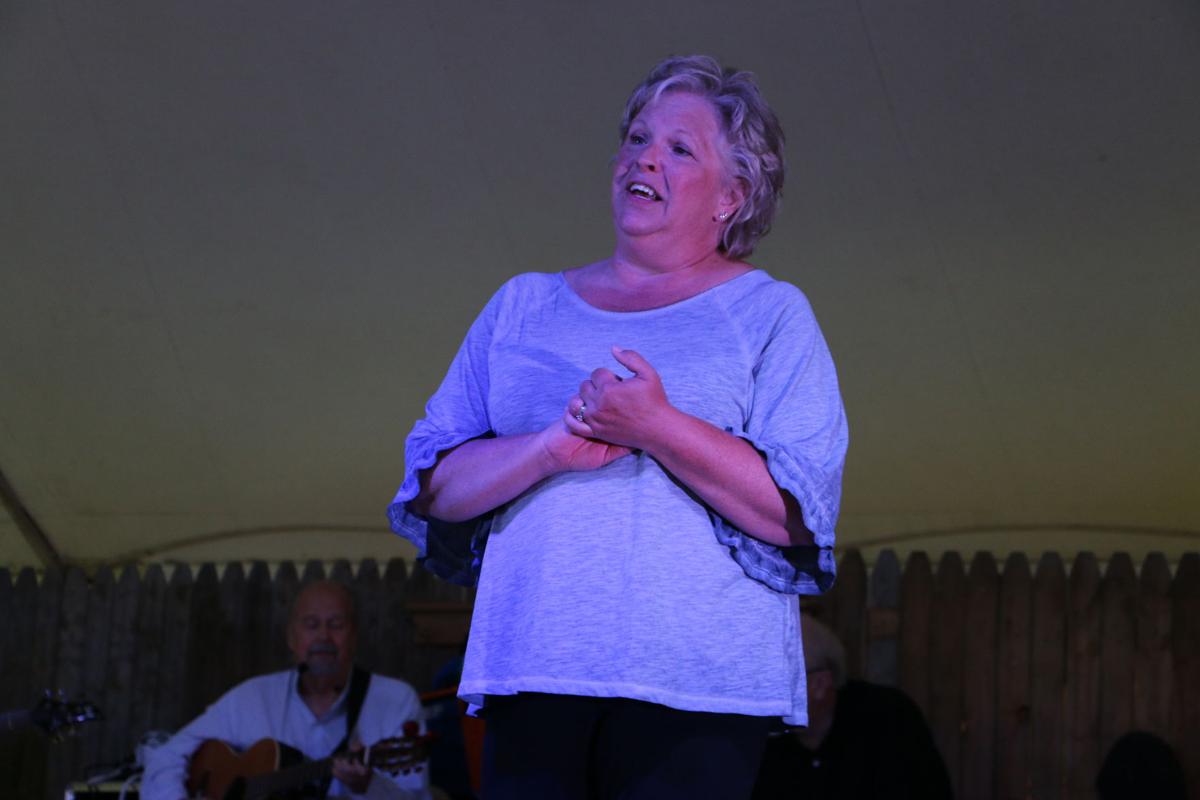 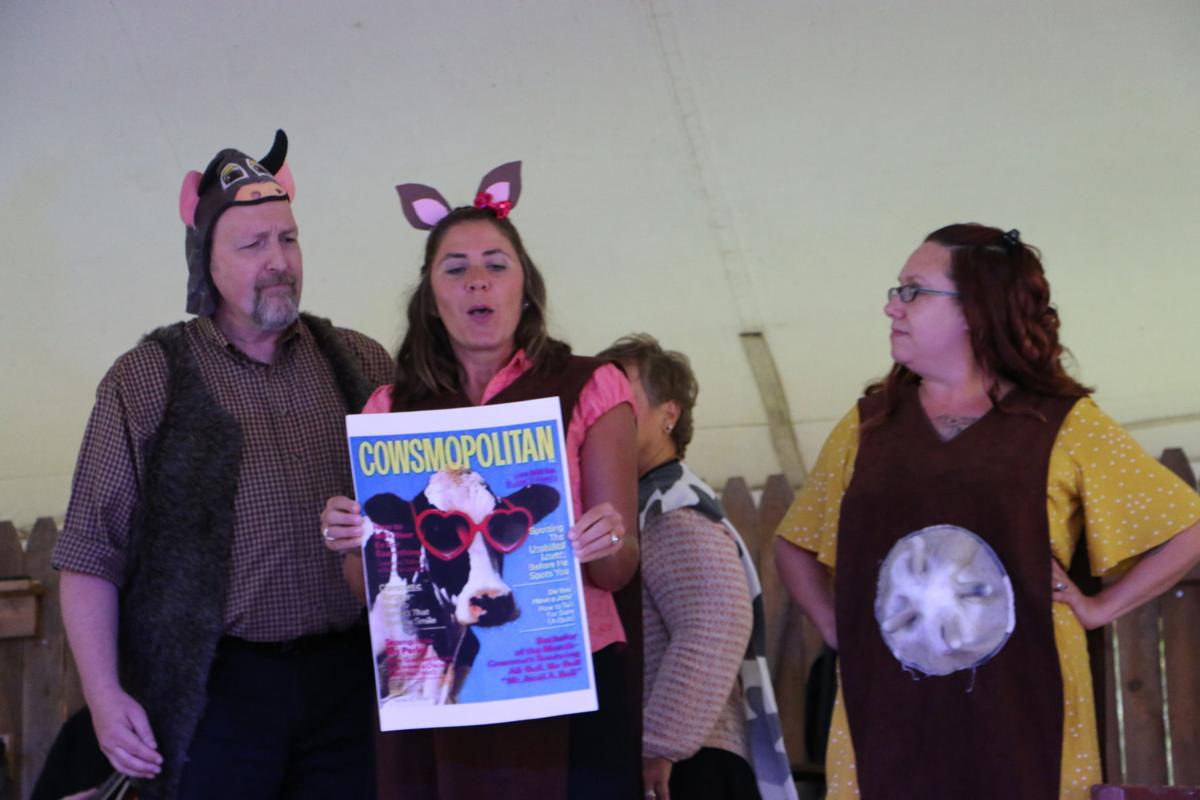 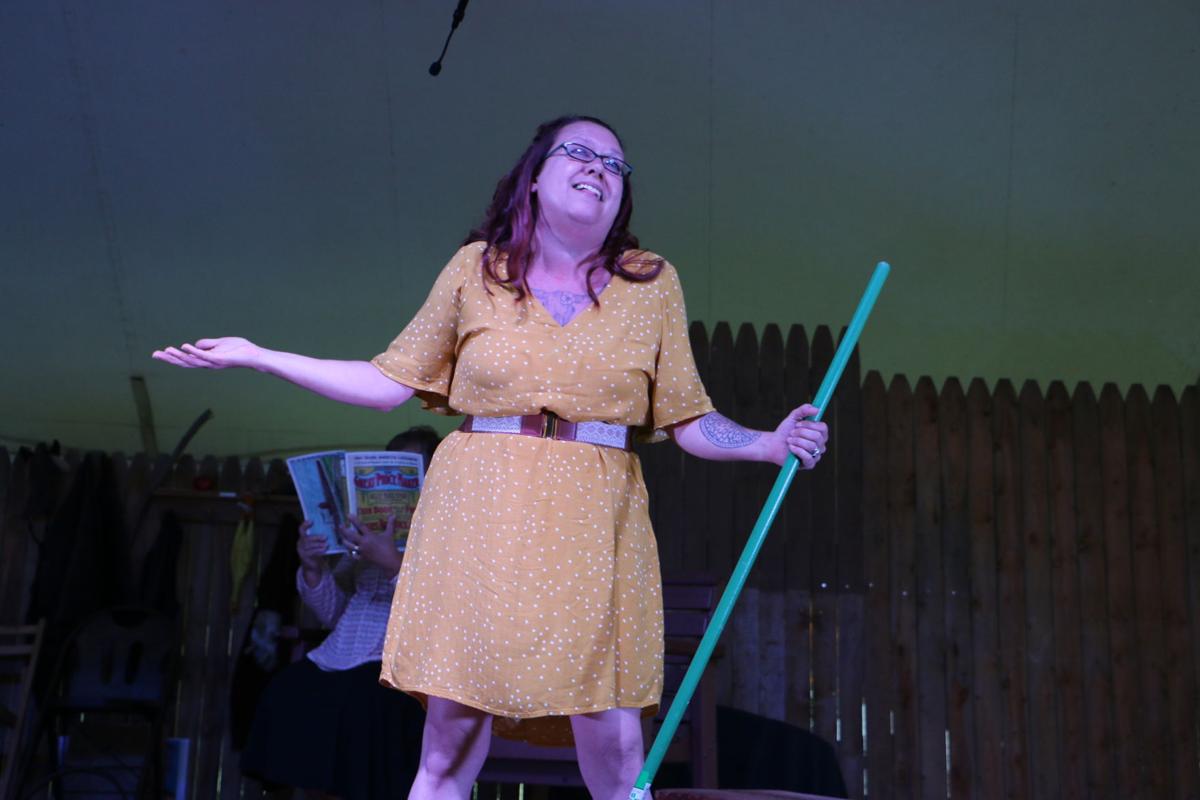 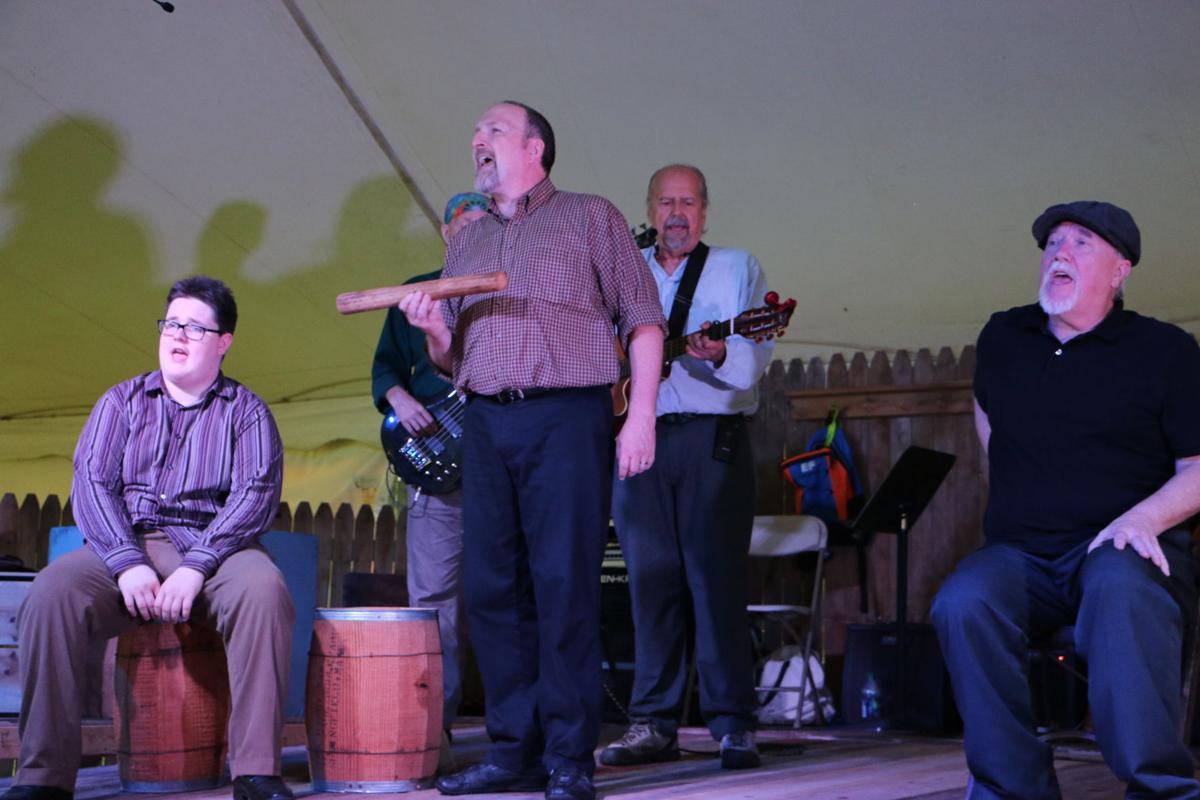 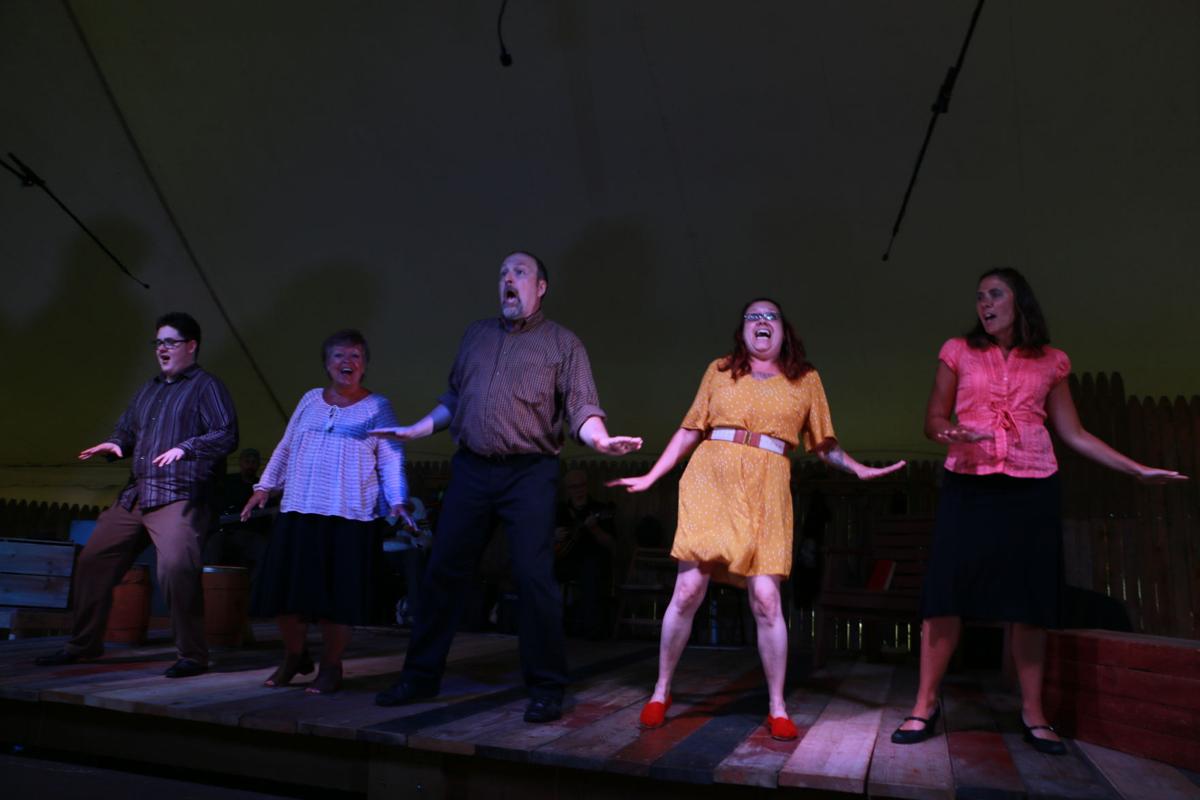 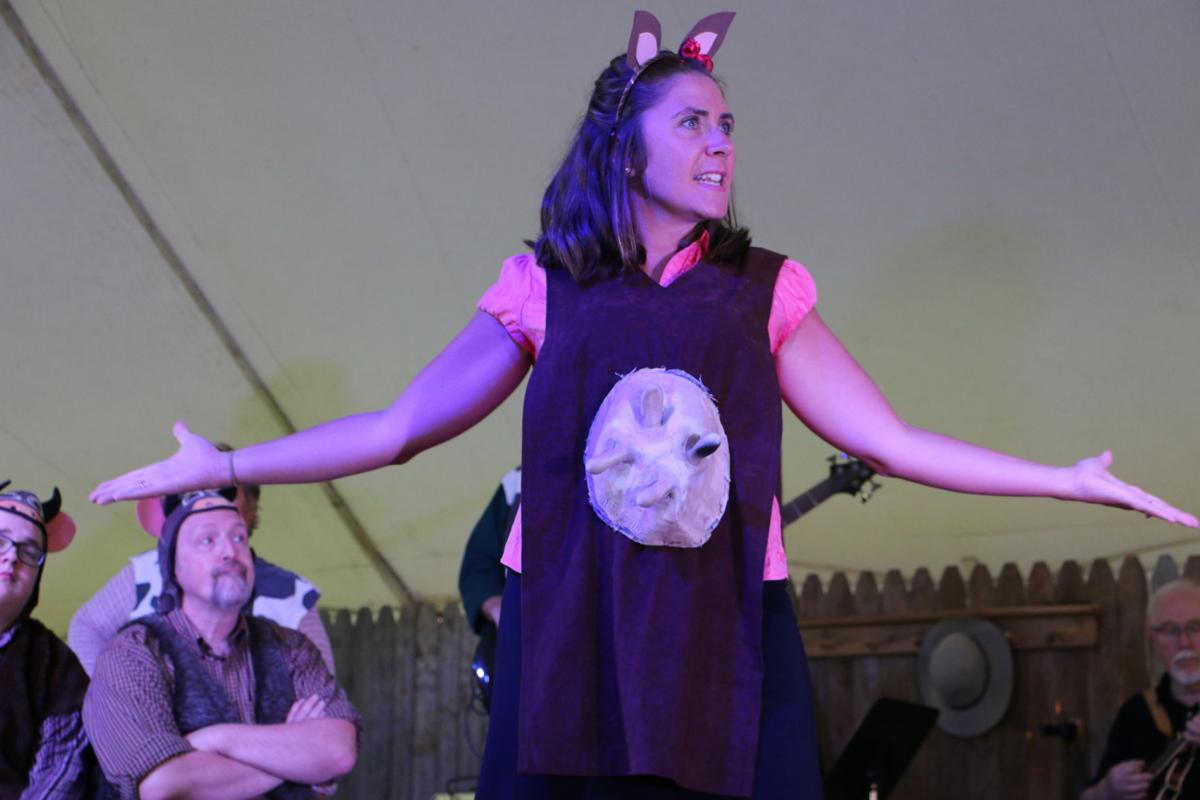 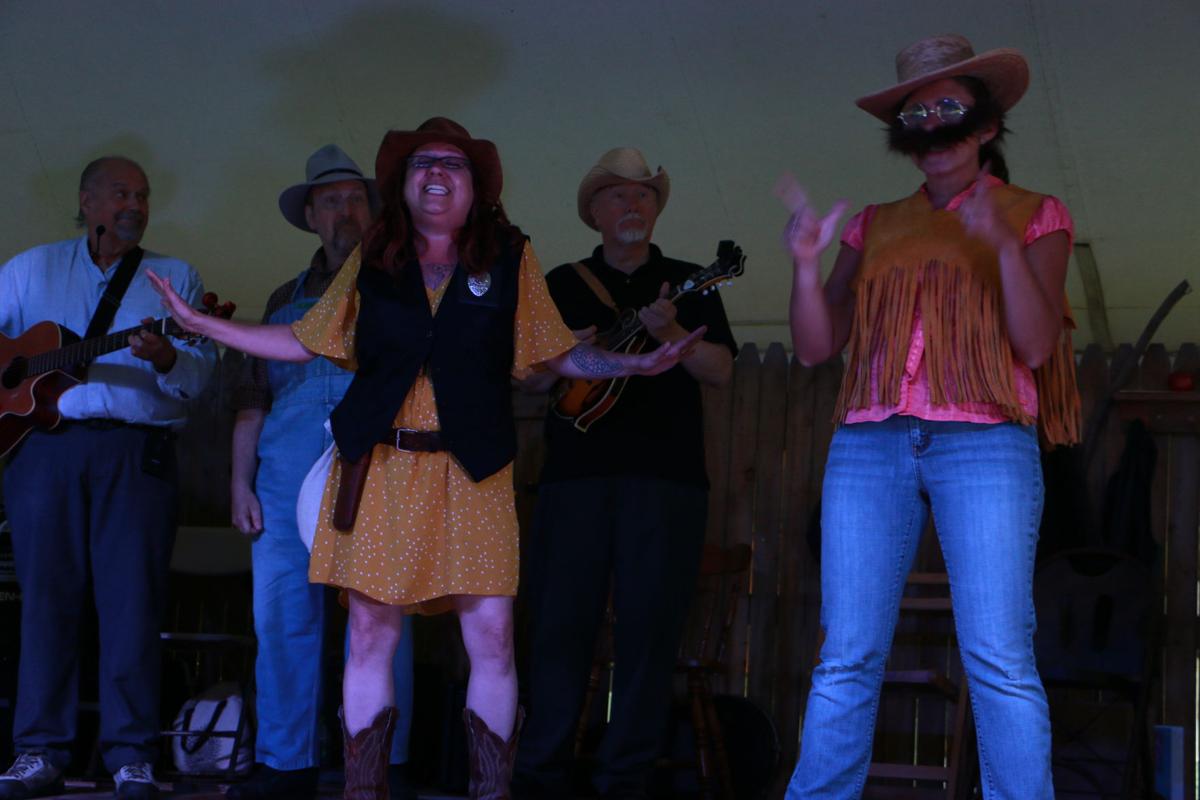 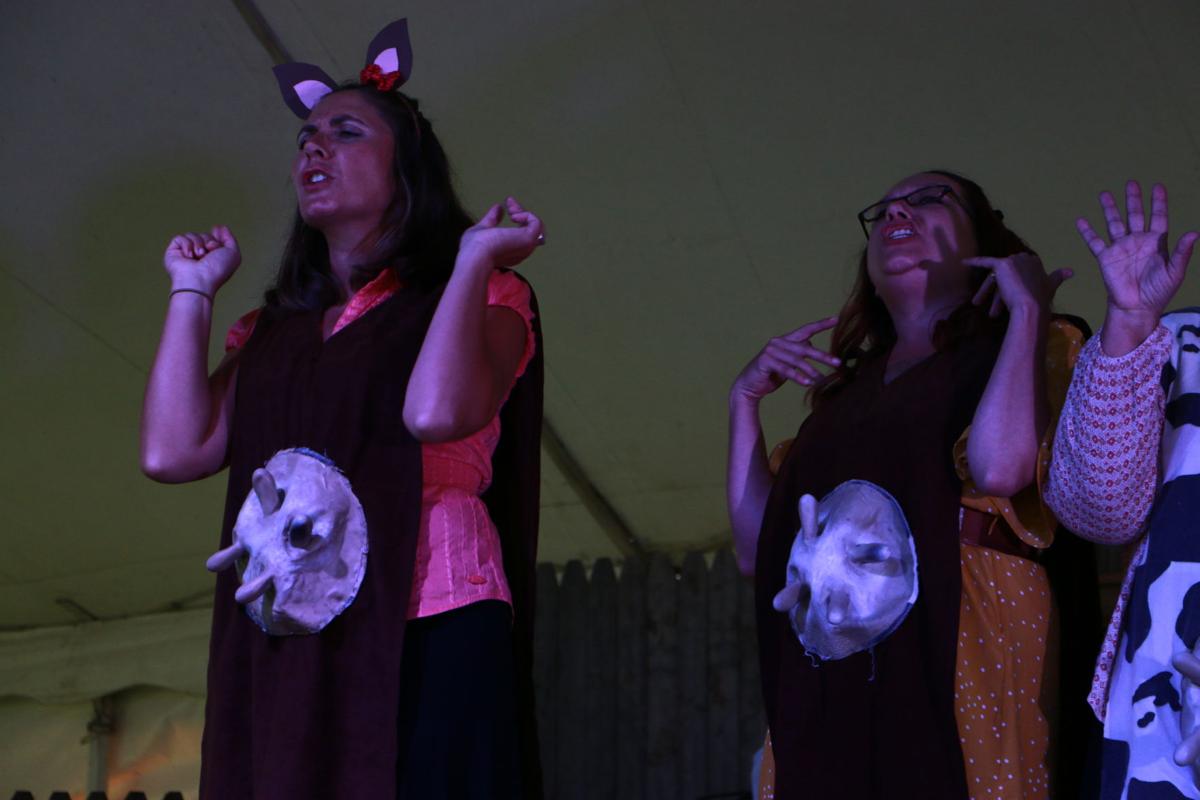 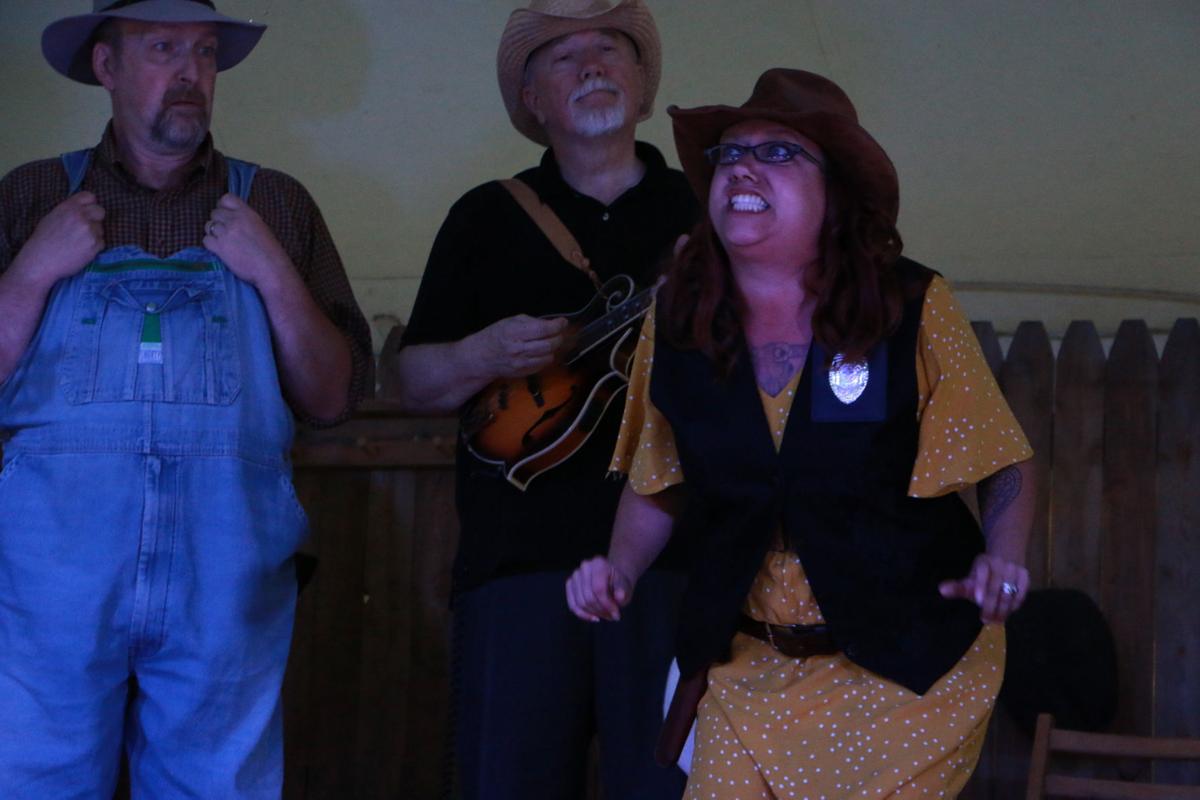 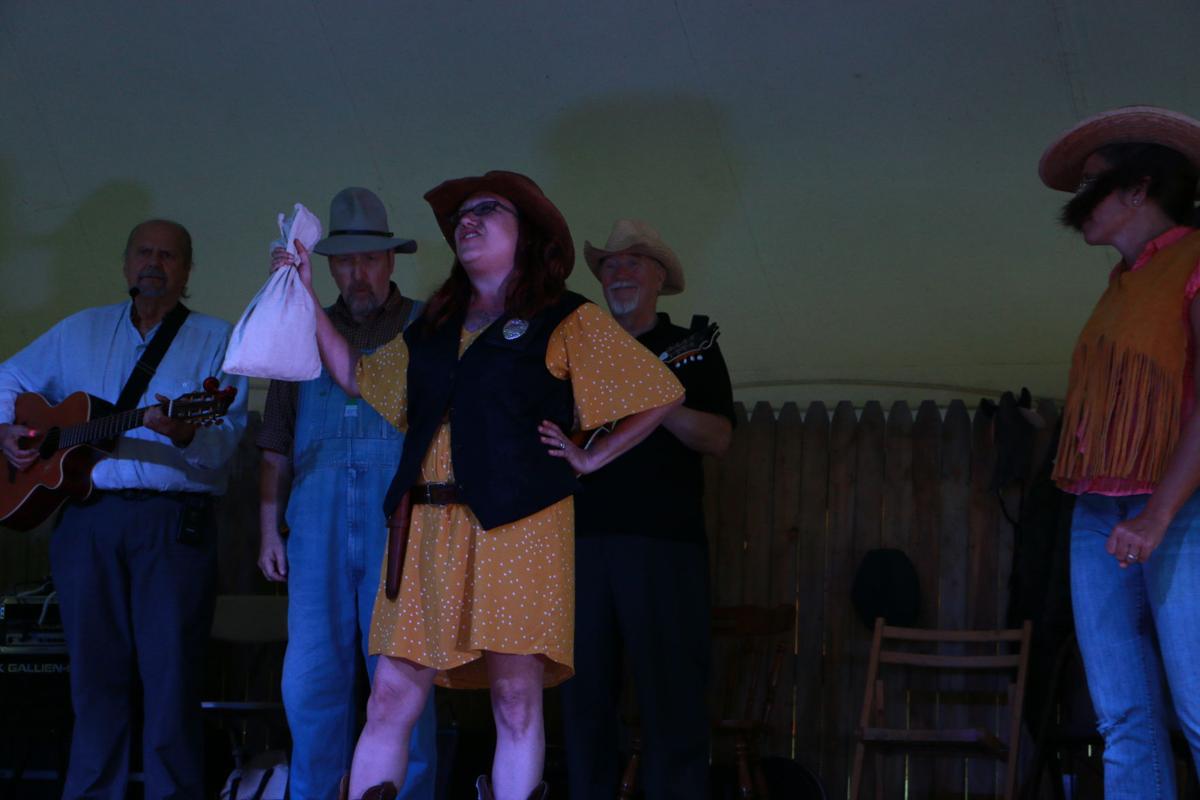 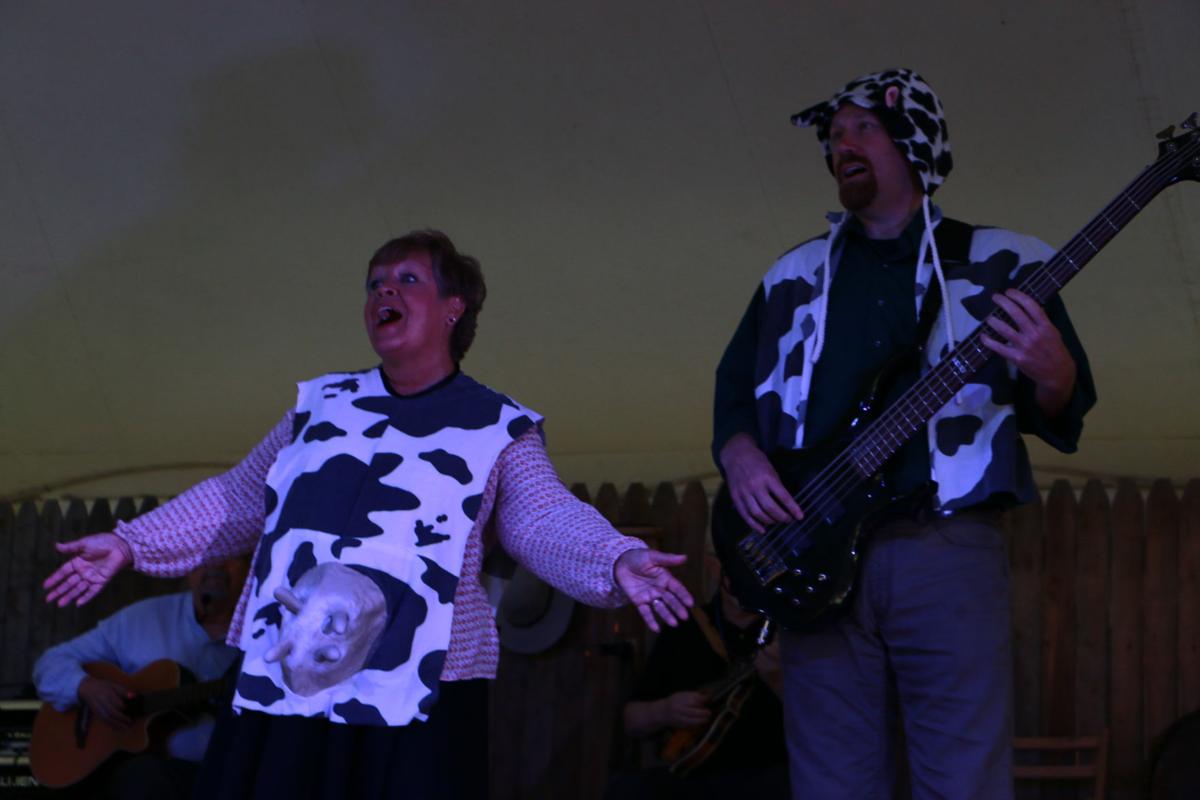 The cast came together in 1999 to entertain fair audiences at the 150th anniversary celebration of Dakota County.

Who knew the wholesome fun would continue for two decades? The cast has not performed all 20 years but has chosen to take a break for a few years.

Most seasons the cast entertains with a dozen shows during the week-long fair at Dakota City Heritage Village.

The tradition of a traveling Chautauqua performing under a tent hearkens  back to the late 19th and 20th centuries when actors and musicians took musical theatre on the road. The mission centered on bringing culture and entertainment to rural areas.

Script lines over the years have taken care to intertwine Twin Cities’ news with state headlines and Dakota county history. Audiences like how each show mixes ethnic humor into songs and then sprinkles in jokes about national politics and popular culture.

This year the show was named “Voices of the Western Wind: 20 Years of Songs and Scenes from Dakota City’s Chautauqua.”

“We poke a lot of fun but underneath it is a love for this state and people in it, and hopefully that is evident toward the end of the show when we sing about the Minnesota smorgasbord because we depend on each other just as the captain of the barge depended on Jane Robinson to light the lanterns,” said Pete Martin, veteran playwright and script writer.

This year, the script poked fun and joked of how back in 1921 the U.S. Department of Agriculture conducted a study to determine what farm women were worth. Perhaps the study found women were priceless.

In 2017, the Chautauqua poked fun of the term “Minnesota nice.” The script voiced Minnesota nice describes how Minnesotans behave in a friendly, somewhat passive aggressive way. The show used the word “Uffda,” described in the urban dictionary as a way to express disgust or surprise.

Martin’s script lines offer laugh-out-loud moments that delve into his perspective on when a Minnesotan should properly use the word “Uffda.”

Uffda’s when you Finland people try to get romantic.

Uffda, you Italians got garlic on your breath.

You Norskis ski downhill so fast – it scares me half to death.

Uffda’s when a cheeky Frenchman pinches your behind.

Uffda’s when your bagpipes are so ever-loving’ loud.

Oh my gosh, your hip hop lyrics – turn the volume down.

“I just love it because there is music and entertainment, information and education and I especially like that aspect of it,” said Pearl Shirley, longtime volunteer and former board member for Heritage Village Dakota City.

Last year the songs and skits revolved around a theme of “Surviving Minnesota.” The music and jokes highlighted how Mother Nature offers cold, cold weather, mosquitoes and pot holes left over from harsh winters.

“We always try to have a somber story about Native Americans in the show and a song,” said Martin since Dakota County Fairgrounds was built upon land settled and tended by Native Americans.

Music composer Eric Peltoniemi loves to compose music to accompany the fun-loving, silly songs. Both men have been writing lyrics and songs in partnership for years.

“The fun part is just working on a new project because it is always kind of an adventure where people give me rough ideas for lyrics and we work on a whole set of lyrics, and the adventure is to turn it into a song and we have been doing that for a longtime,” Peltoniemi said.

Song themes are serious but each one is sung in a silly style intended to bring repeated, laugh-out-loud moments and smiles on fairgoers’ faces.

A few years ago, the Chautauqua script focused on immigrants and funny observations about the immigrant experience from many who moved to Minnesota from other countries.

Last year the “Surviving Minnesota” show tackled a few headlines taken from history after researching Minnesota newspapers. The song “Minnesota Tough” highlighted how resilient Minnesotans can be and another called “Grandma was a Giant on the Land” shared how farmers displayed determination, grit and a never ending work ethic passed on from generations past who worked the farmland.

One show scene tore a newspaper headline that talked about how locusts destroyed farm crops back in the 1870s. Then Minnesota Gov. Pillsbury declared a day of prayer against the locusts. Back then, it seemed preposterous how the legislature approved the action of paying farmers $1 a bushel for every bushel of locust carcasses farmers could bring in. But that actually happened.

Martin said sometimes history can be interesting and quite silly at the same time. He compiles pieces of state history from newspaper headlines he finds online. He likes to weave facts into scripts he discovers from old books found in the Dakota City Heritage Village library.

One year a script pulled a scene from the 1800s when Minnesota’s first governor, Gov. Henry Sibley hosted a penny auction after farms were being foreclosed on all across the state and then resold. Some farmers showed up with clubs at auctions and some farmers bid a penny on the farms to instigate the closing of the auction. Then the farmers would turn the farms back over to the original farm families and landowners.

This year the cast celebrated two decades of scripts, songs and dance and the cast calls the Chautauqua its second family.

In the program bulletin, the cast wrote “We feel a special connection with everyone who has been part of this show and that connection extends to our audience, some who have been at every show for the past 20 years. Seeing those faces in the crowd when we walk on state is like seeing an old friend.”