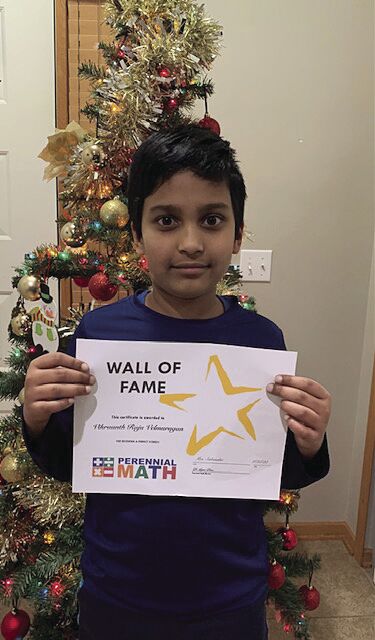 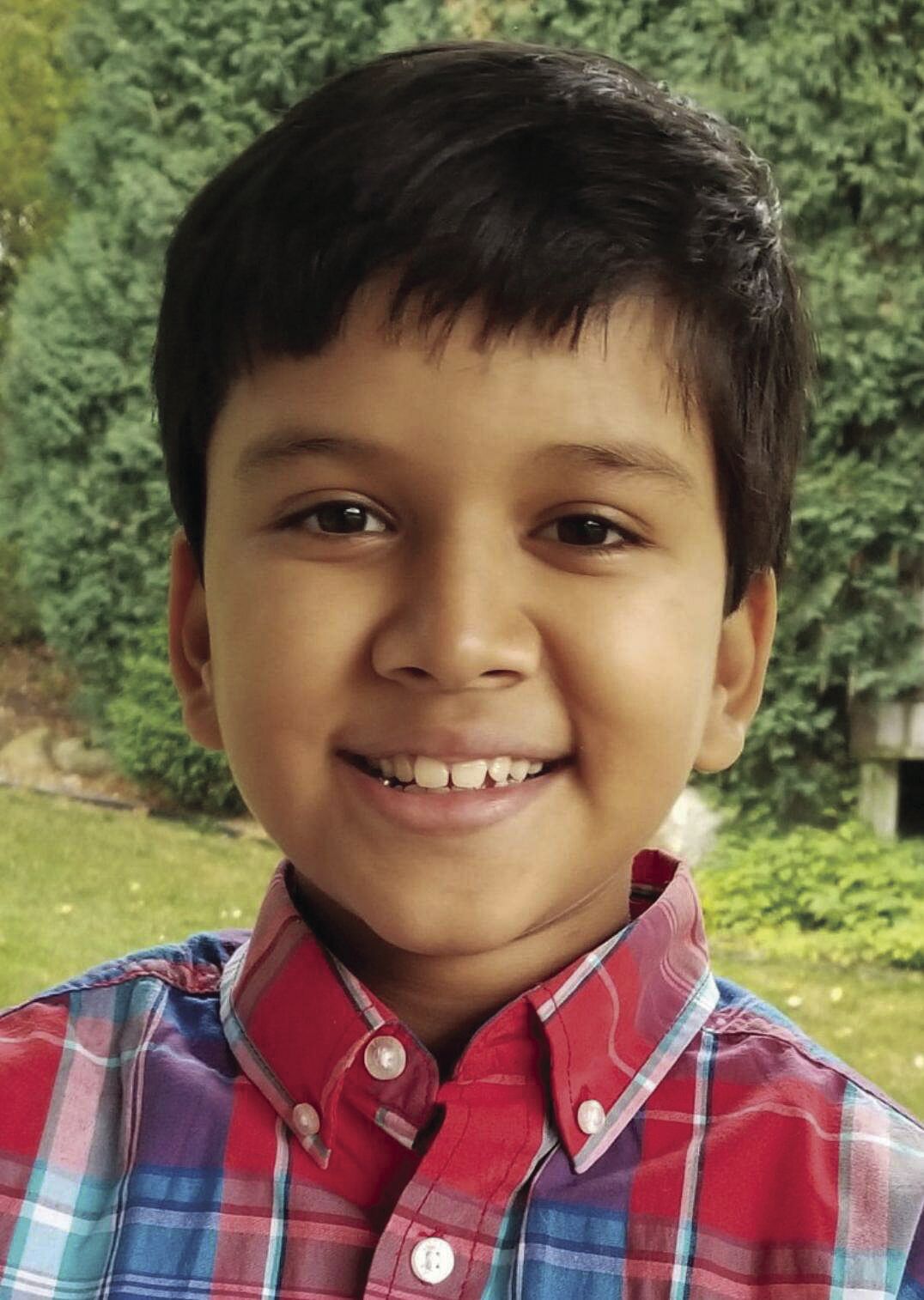 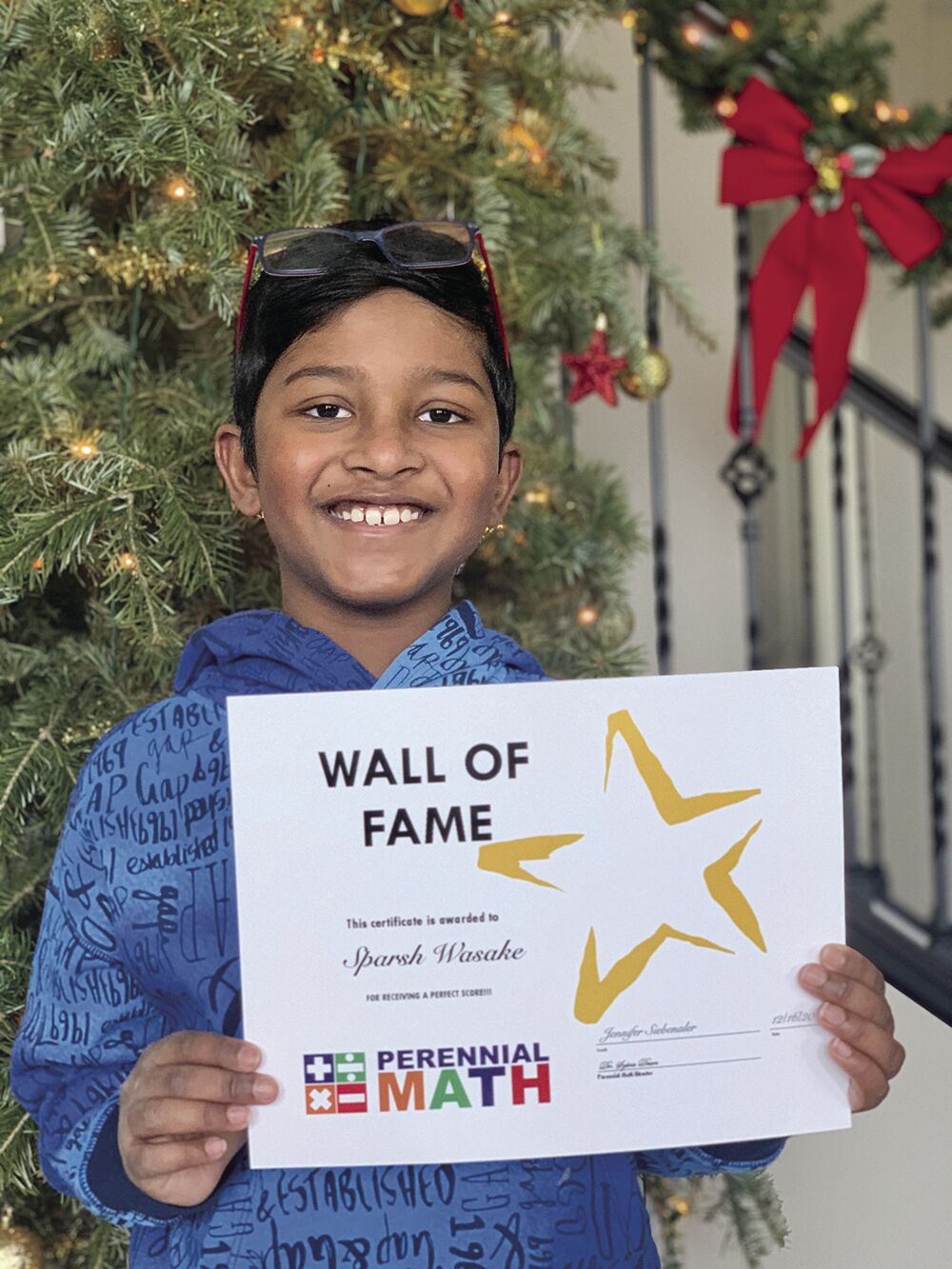 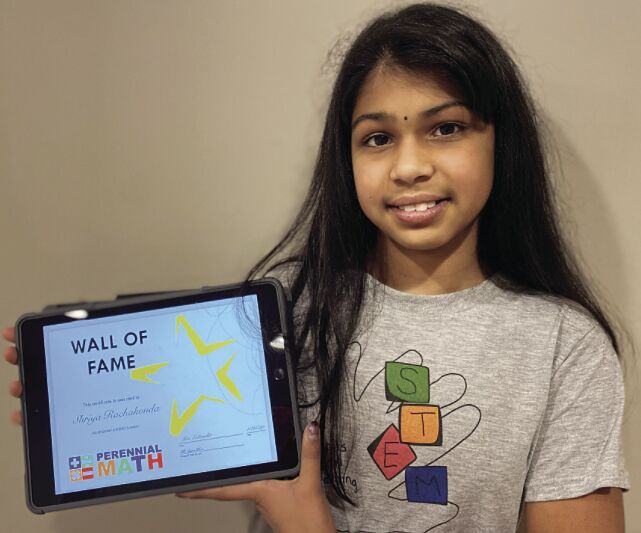 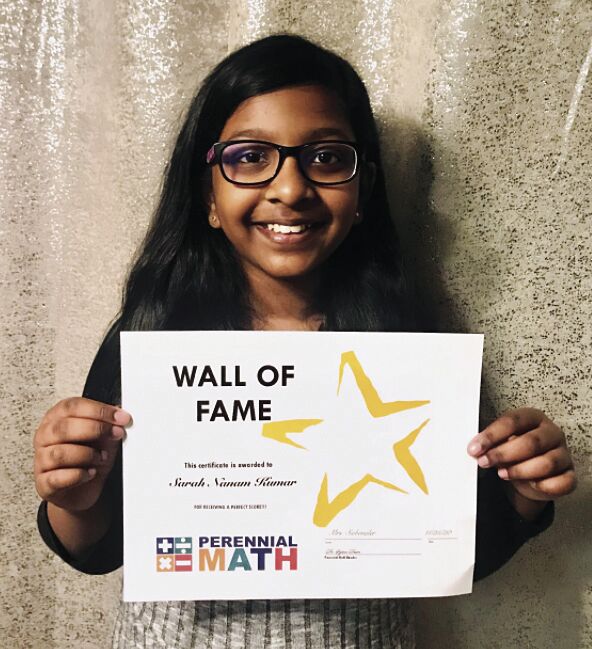 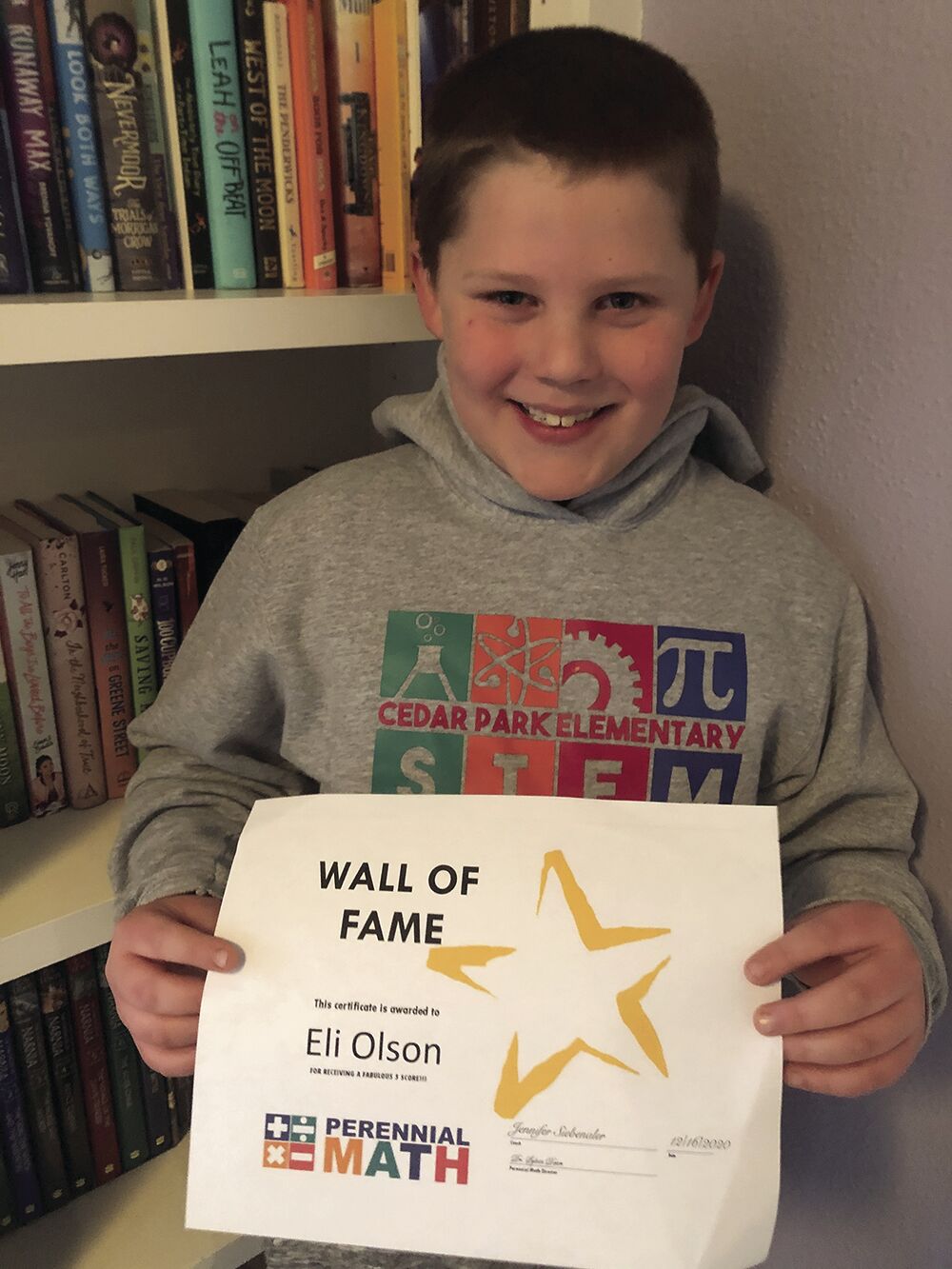 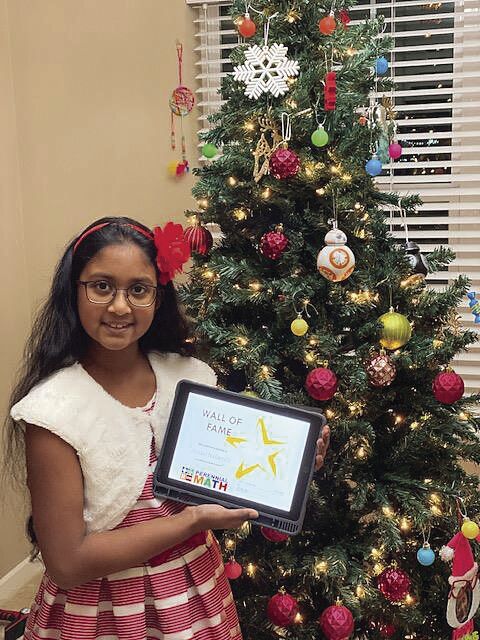 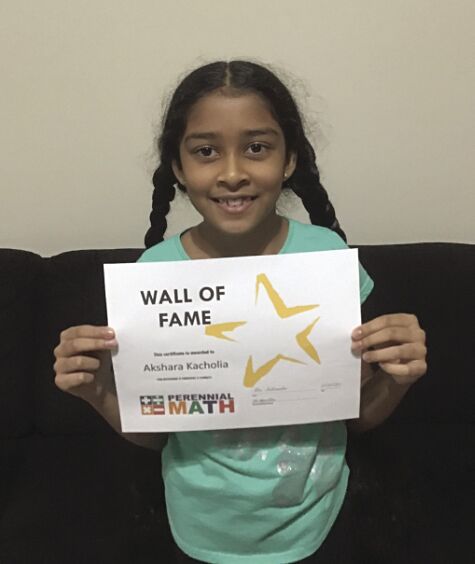 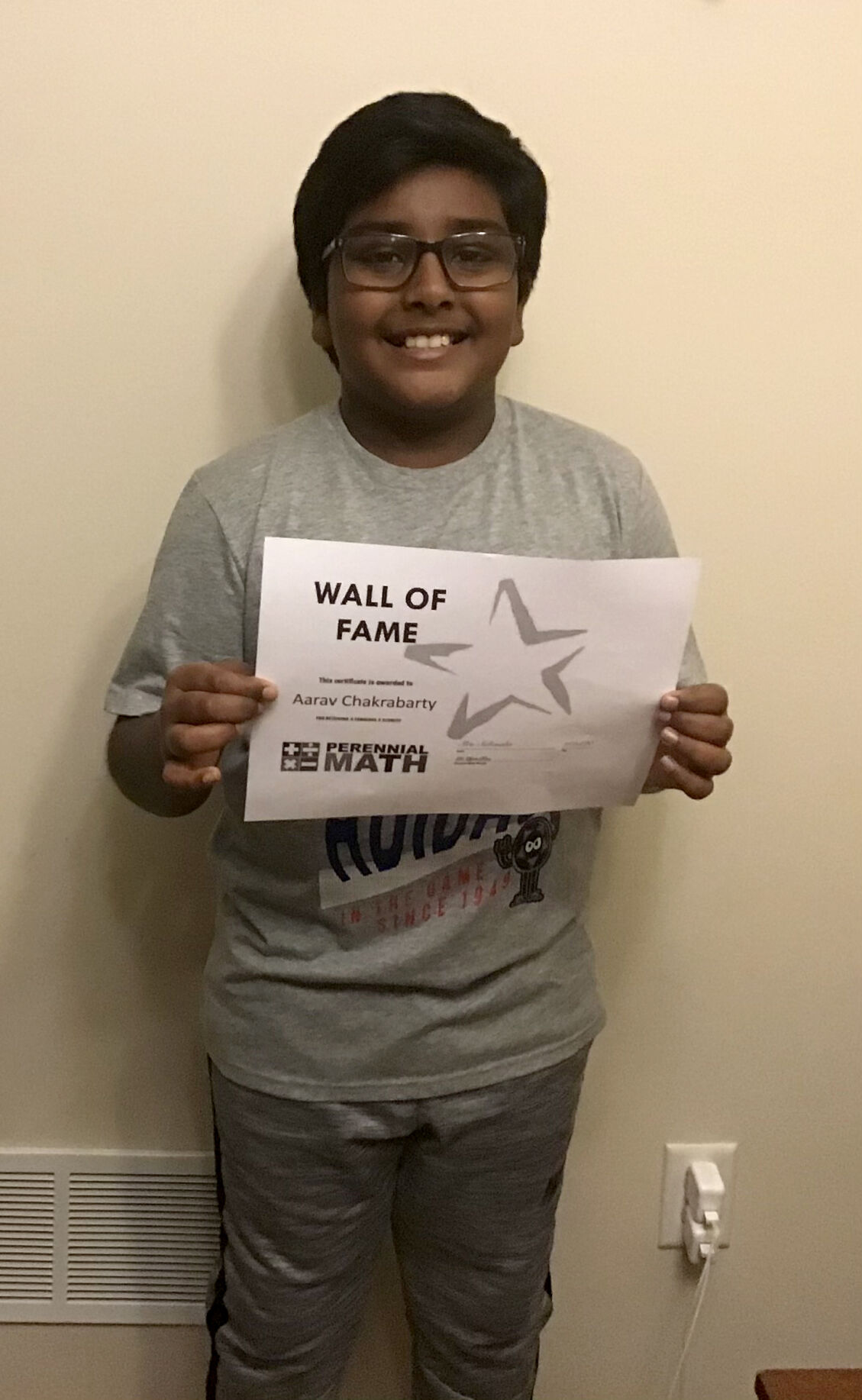 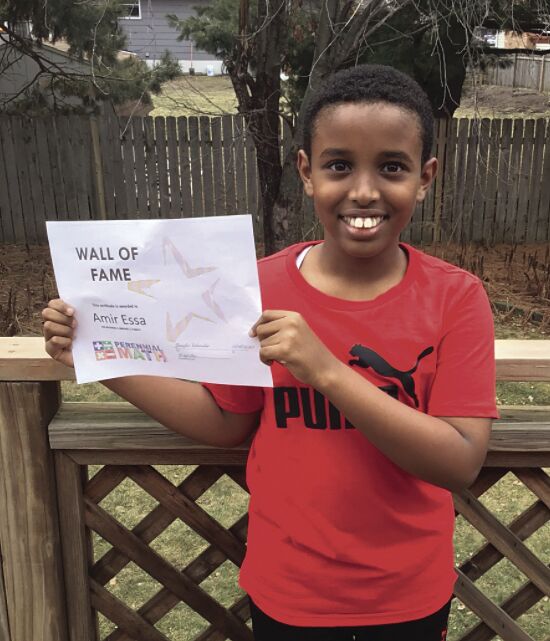 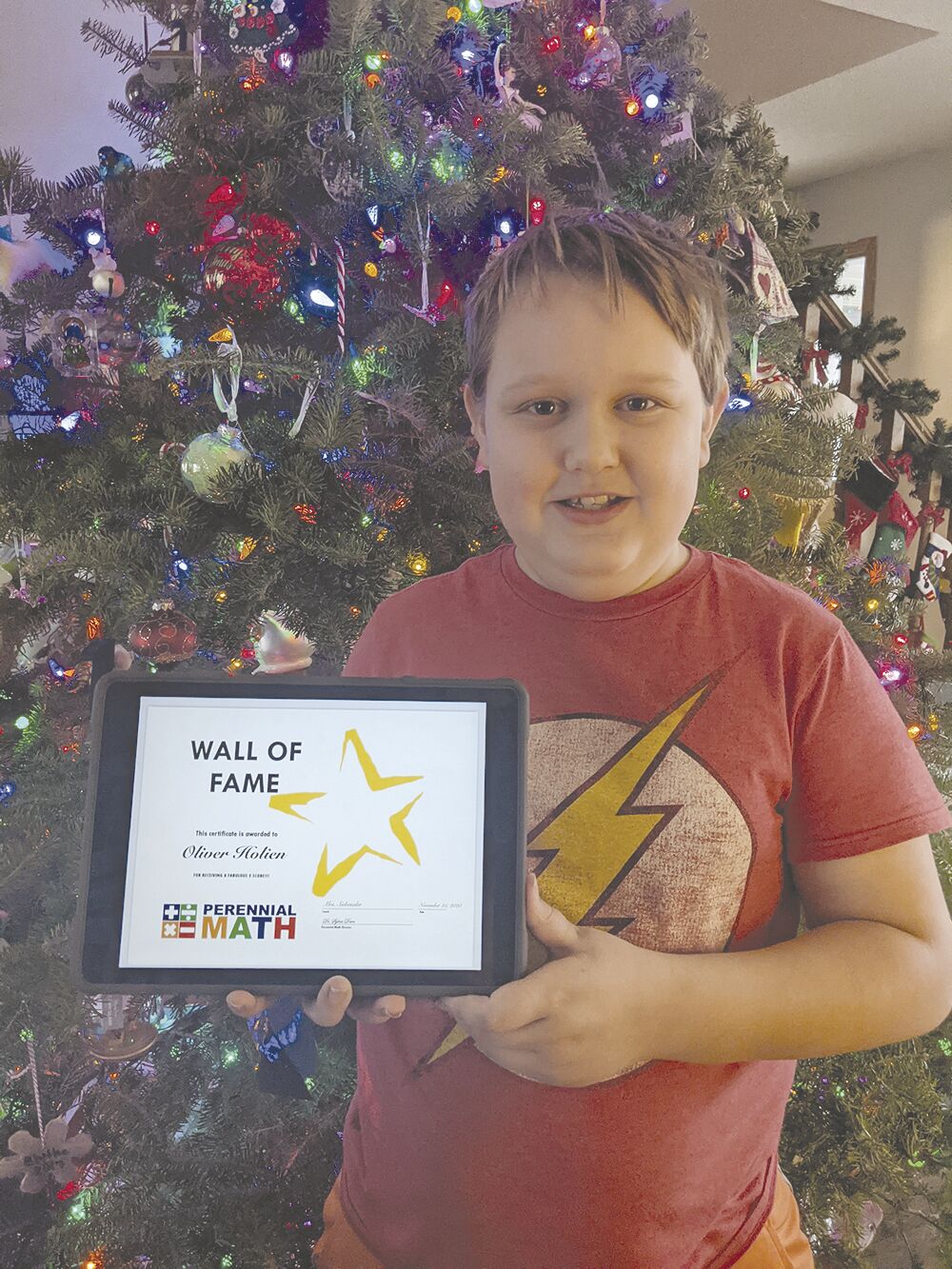 The Apple Valley school participates in Perennial Math, which includes students from all over the world who compete in it. For the first time, the school competitions were held virtually because of the COVID-19 pandemic, said Jennifer Siebenaler, Cedar Park gifted and talented specialist.

“Cedar Park Elementary started competing in the tournament the year I was hired as the gifted and talent development specialist here. This is our third year competing in the Perennial Math Competitions and it is by far the best we have done as a school,” she said. “I researched many math competition programs when I arrived at Cedar Park, and chose Perennial Math because it was a global competition that was centered around problem solving and critical thinking. I believed it best prepared students for the 21st century.”

Siebenaler said each of the Cedar Park teams is composed of 30 students. There are two teams: Intermediates made up of all fifth-graders who compete against other fifth- and sixth-graders around the world; and Rookies consisting of third- and fourth-graders. This school year, Cedar Park had more third-graders qualify to be on the rookie team more than before.

The monthly competition is a test of six multi-step math word problems. Students get 30 minutes to complete as much of the test as they can. Each student completes their own test without help from anyone else, Siebenaler said.

“To earn a spot on the team you have to have the highest scores on the Perennial Math Qualifying Test. The first season has monthly competitions in November, December, January and February. Students compete for a team score and an individual score,” she said. “I like this aspect of this competition as well. Students who don’t make the competition team are still encouraged to practice with us. Some students prepare for the qualifying test all summer in hopes of making the team, and some students just take the qualifying test to see how they do.”

The recent winners from Cedar Park are:

• Intermediate Team: Taj Bora, Sarah Nanam Kumar and Shriya Rachakonda, first place with perfect scores (six out of six); Aarav Chakrabarty, Oliver Holien and Akshara Kacholia, second place with only one wrong in the competition (five out of six).

“Both fives and sixes are very difficult to achieve,” she said.

Some of the Cedar Park winners offered their reflections about the competition so far this year.

Taj Bora is happy and proud about getting 100 percent in the November and December competitions.

“For all my competitions, I do many practice worksheets from old perennial math tournaments from our gifted and talented teacher, Mrs. Siebenaler,” Taj said. “She also gives us math problems to solve every week, and always gives us feedback so that we can improve. I also have some problem solving books that my parents gave to me.”

Nanam Kumar said she has learned how to quickly solve complex math problems using different strategies within a given time period by being in Perennial. She feels elated about her scores.

“This competition has really helped me to learn how to solve difficult math problems. It was a good experience as it helped improve my math skills. I am thankful to my teacher Ms. Siebenaler for always encouraging me and providing us with worksheets to succeed in the competition,” she said.

Shriya Rachakonda has participated in Perennial Math since third grade. She said she prepared by doing past tests as a practice.

“I feel good about getting a perfect score because it was my first time getting a six,” she said.

Akshara Kacholia’s result in the November competition was the first time for getting a score higher than one.

“To participate in this competition is an amazing feat. It is one the best experiences I have ever had. From this competition I learned you can’t always be prepared for everything that will ever happen to you,” Akshara said.

Aarav Chakrabarty said he felt good starting off the year with a five and it’s nice to see the younger students getting inspired by the fifth-graders.

“It was really cool because I’ve always really been good at math since I was young but I couldn’t really show it. Then when this competition was introduced I really thought that this could be a way to show that I’m good at math,” he said. “This competition has taught me lots of important things like understanding the question, double checking, trying different solutions, and many more things.”

Sparsh Wasake said he prepared for the competition by memorizing a “cheat sheet” his mom made for him and working in old Perennial Math books his parents purchased for him. He practiced daily and watched videos about math.

“I feel great because I love math and I had been practicing for a long time. I was very excited when I attended it and I felt a bit nervous,” he said about his results.

Eli Olson did not do as well as he wanted during the November competition so he spent more time preparing for the December competition. He did a lot of practice tests and went through practice slides with his parents, he said.

“In my opinion, it is cool that you compete internationally,” he said. “At our school, we are really lucky because the fifth-graders, who did the best on the last test, help us Rookies with strategies to solve different problems and get better. “They work with us in small groups and go through problems. They also give us advice and tips. It’s great for us to learn from people who have already been on the Rookie team.”

When asked about what it’s like to participate in the competition, Amir Essa said it was fun trying to solve the challenging problems and put his math skills to the limit.

“I feel like I did better than my last competition because I took more time with my answers. I rechecked my work,” he said.