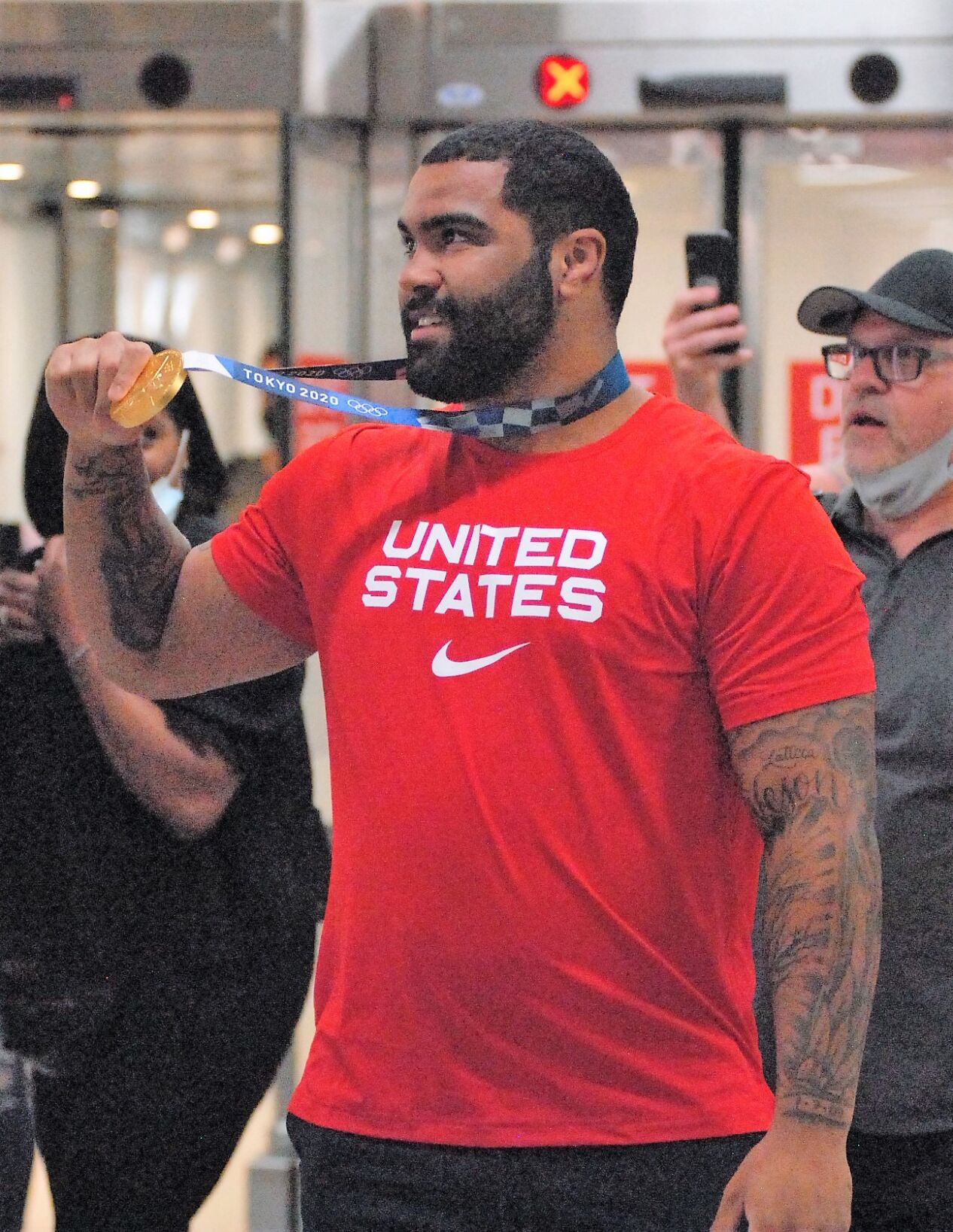 Gable Steveson shows off his Olympic gold medal to fans after arriving at Minneapolis-St. Paul International Airport on Sunday. The Apple Valley native won the 125-kilogram freestyle championship Friday morning in Tokyo and went undefeated in the Olympic tourney. 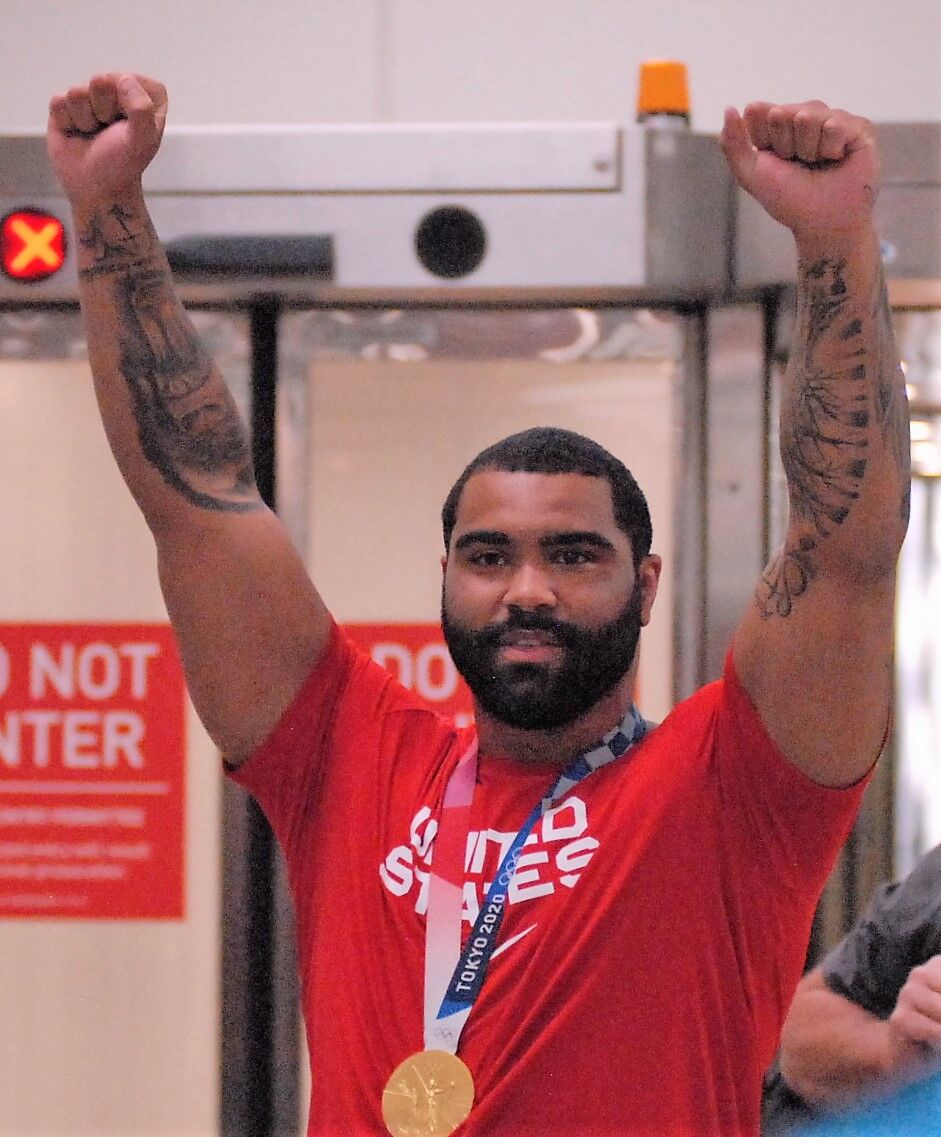 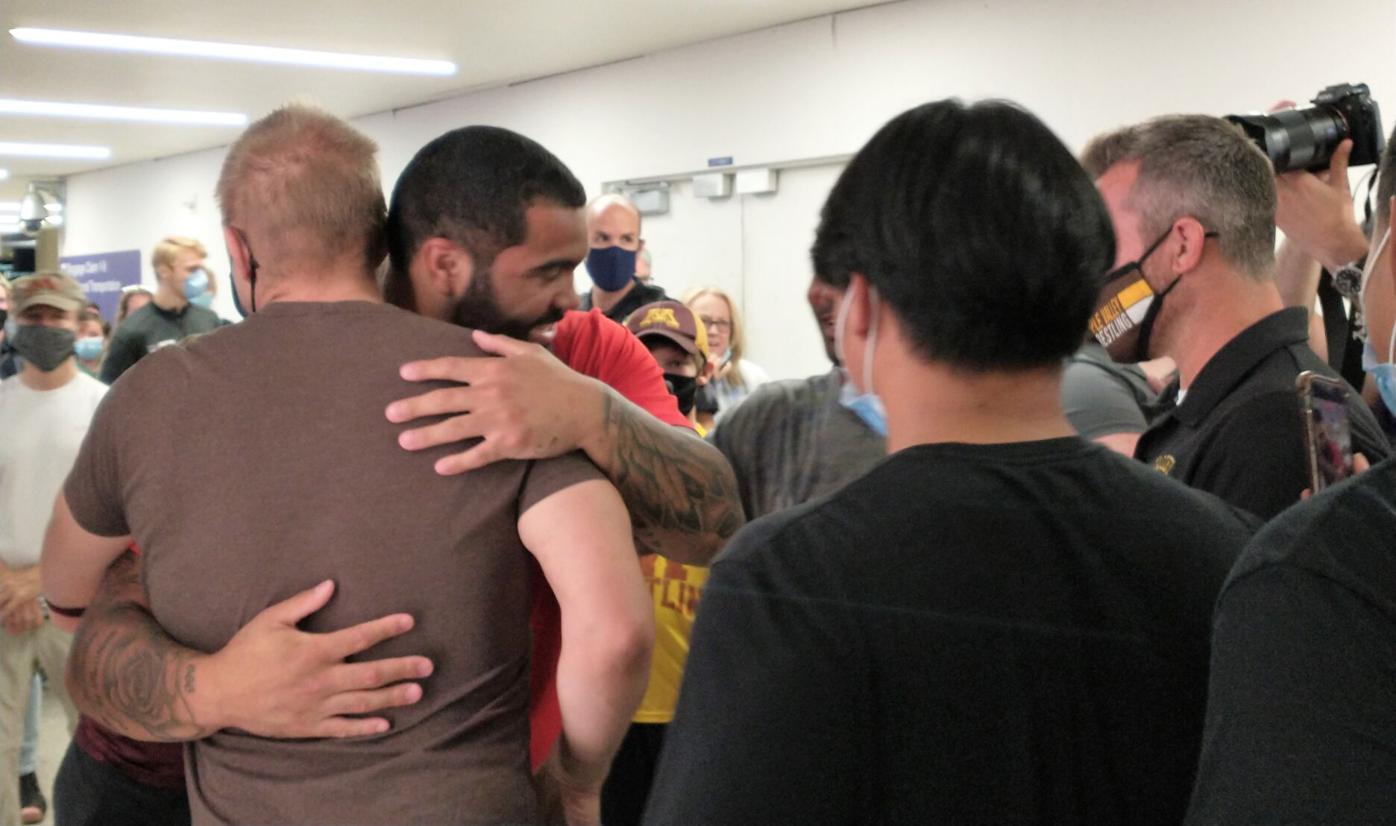 Gable Steveson embraces a supporter upon his arrival at Minneapolis-St. Paul International Airport on Sunday night. 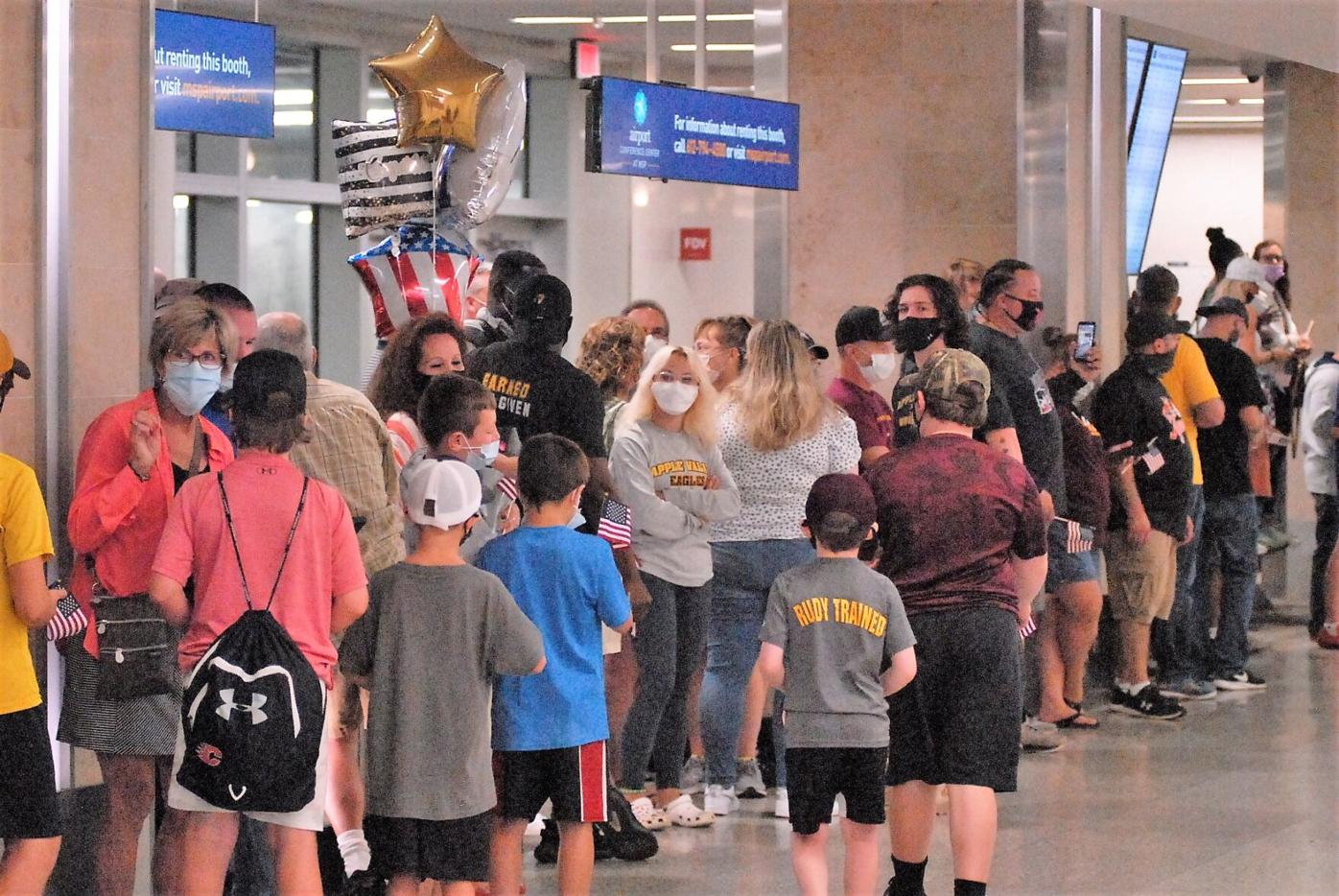 Fans lined up for a chance to greet Olympic wrestling gold medalist Gable Steveson of Apple Valley upon his arrival at Minneapolis-St. Paul International Airport. 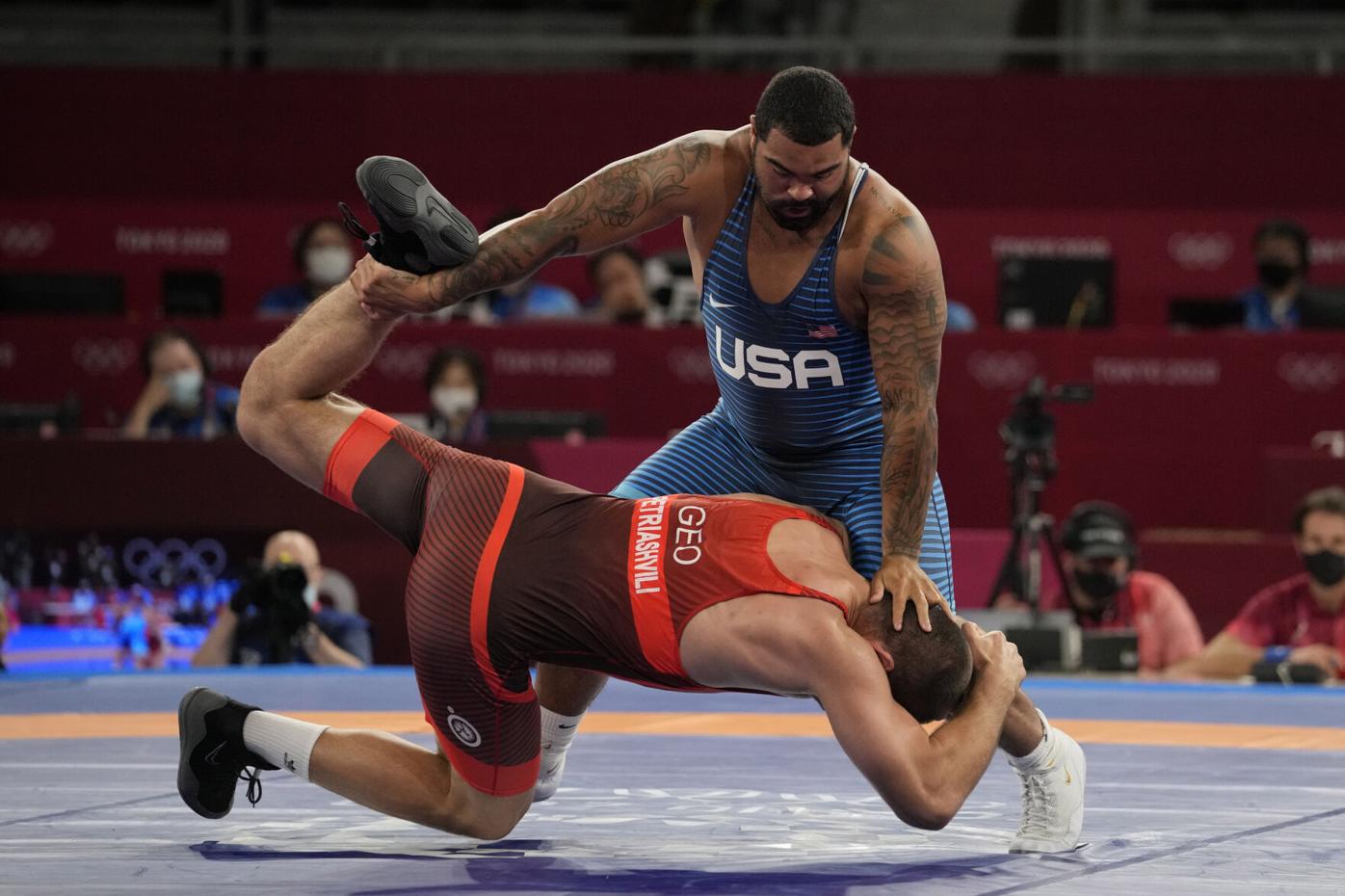 Gable Steveson fends off a takedown attempt by Georgia's Geno Petriashvili during their men's freestyle 125-kilogram wrestling final match at the 2020 Summer Olympics on Aug. 6, 2021, in Chiba, Japan. Steveson, of Apple Valley, scored two takedowns in the final 13 seconds to win 10-8.

Gable Steveson shows off his Olympic gold medal to fans after arriving at Minneapolis-St. Paul International Airport on Sunday. The Apple Valley native won the 125-kilogram freestyle championship Friday morning in Tokyo and went undefeated in the Olympic tourney.

Gable Steveson embraces a supporter upon his arrival at Minneapolis-St. Paul International Airport on Sunday night.

Fans lined up for a chance to greet Olympic wrestling gold medalist Gable Steveson of Apple Valley upon his arrival at Minneapolis-St. Paul International Airport.

Gable Steveson fends off a takedown attempt by Georgia's Geno Petriashvili during their men's freestyle 125-kilogram wrestling final match at the 2020 Summer Olympics on Aug. 6, 2021, in Chiba, Japan. Steveson, of Apple Valley, scored two takedowns in the final 13 seconds to win 10-8.

With Olympic medal around his neck, champion greets crowd of fans, family at airport

A crowd gathered near an arrival gate Sunday at Minneapolis-St. Paul International Airport, waiting to greet Gable Steveson as if he were a conquering hero.

Because to them, that’s exactly what he is.

Steveson emerged through the doors with an Olympic gold medal around his neck, the biggest prize in a frantic five months during which he won an NCAA championship for the University of Minnesota, finished first at the U.S. Olympic Team Trials, dominated at the Pan American Games and, finally, won the Olympic 125-kilogram freestyle tournament by defeating the two men that have won every world championship at the weight class since 2014.

Cheers broke out, and Steveson said he appreciated it.

“It means a lot to have so many people here supporting me, so many fans,” said Steveson, 21, who’s path to No. 1 in the world includes four state high school individual championships at Apple Valley. “I love being here, I love representing the Golden Gophers, the USA and myself also.”

Steveson defeated three-time world champion Geno Petriashvili of Georgia 10-8 on Friday morning (Minnesota time) with a furious rally that saw Steveson take down Petriashvili twice in the final 13 seconds. The second, and deciding, takedown came with less than one second remaining. He was back home from Tokyo about 60 hours later. Because of broadcast rights restrictions, Steveson could not watch a replay of his gold medal match until returning to the United States.

“The last 13 seconds I cannot describe. I don’t even know how I did it myself,” Steveson said.

The crowd at the airport included a number of people with ties to the Apple Valley wrestling program, including coaches Josh Barlage, Dalen Wasmund and Rudy James, all of whom have worked with Steveson, who won Minnesota State High School League championships in 2015 through 2018.

“It’s been amazing to watch him grow,” said Wasmund, who was Apple Valley’s head coach for the first four of Steveson’s five high school seasons and is an Eagles assistant coach now. “He was always good. He always had explosiveness, always had the power and the quick feet. Those are great skills. Now he’s gotten even stronger and turned into a man.

“This was really, really cool, It was a neat experience and fun to watch him.”

Steveson went undefeated through the NCAA tournament, Olympic Trials, Pan American Games and Olympic tournament. He shut out his first three opponents in the Olympic tourney, including 2016 gold medalist Taha Akgul of Turkey 8-0 in the quarterfinals.

In the gold medal match Steveson took a 4-0 lead in the first of two three-minute periods on a takedown, a passivity point assessed against Petriashvili and another point when Steveson forced Petriashvili to step out of the circle.

In the final two minutes Petriashvili appeared to take control by scoring six points in quick succession with a takedown and two gut wrenches for an 8-5 lead. Facing what University of Minnesota coach Brandon Eggum – also Steveson’s coach in the Olympics – called a nearly impossible situation, Steveson took down Petriashvili with about 10 seconds remaining.

Steveson released Petriashvili so the wrestlers could return to a standing position with 6.5 seconds left. He faked a shot at Petriashvili’s left leg, the spun around the back and got control with 0.2 seconds remaining.

The Georgia coach requested a video review to determine if time had expired when Steveson got his final takedown. It was clear on the review time had not expired, and Steveson was awarded another point for the failed challenge.

Apple Valley’s coaches have said it was evident from the start they were working with a special talent.

“As coaches we all thought he had this potential, we really did,” Wasmund said. “From younger ages, how he competed and how easy he made it look, we really thought (the Olympics) was something in his future. All he had to do was keep working hard, and it was our job to find him workout partners. I wouldn’t take a ton of credit for it - we just wanted to find him good workout partners and a good room to work out in, and I think we provided that. But he does all the work.”

Upon returning to Minnesota, Steveson reunited with his parents, Robert and Laticia, and his brother Bobby, a two-time state individual champion at Apple Valley High School. Then he spoke to the media and met the well-wishers, pledging to stay until everybody who wanted an autograph or photo got one.

Since winning gold, Steveson has been asked several times about his future. He is in no hurry to announce anything. “I’m not sure what’s next,” he said. “A couple of important people have been calling. I’m going to go home, reunite with my family and sleep in my own bed. Those are the most important things. I’ll relax and then get back to a plan.”

His options seem limitless. He already has earned a $250,000 bonus from USA Wrestling for being one of three U.S. wrestling gold medalists. Steveson has at least one year of eligibility remaining at the University of Minnesota. A few months ago it appeared unlikely he would return to the Gophers, but in light of a recent NCAA rule change allowing student-athletes to be compensated for use of their names, images and likenesses, a return to college wrestling now is at least plausible.

He’s also kicked around the idea of going into mixed martial arts or even trying football. The elephant in the room is World Wrestling Entertainment, and if WWE executives’ social media accounts are an indication, they’re anxious to sign Steveson.

For now, he will take time to reflect on his Olympic experience. He’s already certain of one thing.

“I think I did a phenomenal job,” Steveson said.

• Farmington native Patrick Sunderman finished 12th in the qualification round of the men’s 50-meter three-position rifle event. The top eight advanced to the quarterfinals; Sunderman was just four points from a quarterfinal spot.

The three positions in the competition are kneeling, prone and standing, with 40 shots taken in each. Sunderman’s best scores were in prone, where he scored 398 out of 400 points and had two perfect rounds of 100.

Sunderman is a U.S. Army sergeant stationed in Fort Benning, Georgia, and is a competitor and instructor for the Army Marksmanship Unit. He told Sun Thisweek Newspapers recently he plans to stay in the Army as long as he can and intends to try to qualify for the 2024 Olympics in Paris.

• Rosemount High School and North Dakota State University graduate Payton Otterdahl reached the finals in men’s shot put and finished 10th. He threw 20.90 meters (68 feet, 6 inches) in qualifying to grab the 12th and final spot in the finals. He had three throws in the finals, the best being 20.32 meters (66-8). His personal best is 71 feet, 11 inches, which he threw in the U.S. Olympic Trials in June.

The two other U.S. throwers to advance to Tokyo in the shot put, Ryan Crouser and Joe Kovacs, won the gold and silver medals. Crouser set an Olympic record of 23.30 meters (76-5) in winning his second gold medal.

• Riptide Swim Club head coach Mike Parratto had a student and a daughter to watch in the Olympics. His student, Lakeville’s Regan Smith, won two silver medals and a bronze in the women’s competition. Parratto’s daughter Jessica came home with a silver medal in synchronized diving. Jessica Parratto, 27, and teammate Delaney Schnell, won their medals in 10-meter platform, becoming the first Team USA divers to medal in the event.

It was the second Olympics for Jessica Parratto, who grew up in New Hampshire and competed at Indiana University. Her first diving coach was her mother Amy, who’s now also coaching at the Riptide club in Apple Valley.

• Jordan Thompson of Edina, a member of the gold medal-winning U.S. women’s volleyball team, is a former club player at Northern Lights in Burnsville. Thompson played at the University of Cincinnati before helping the U.S. win its first gold medal in women’s volleyball. Thompson injured her right ankle in the U.S. team’s fourth match and did not play the rest of the tournament.