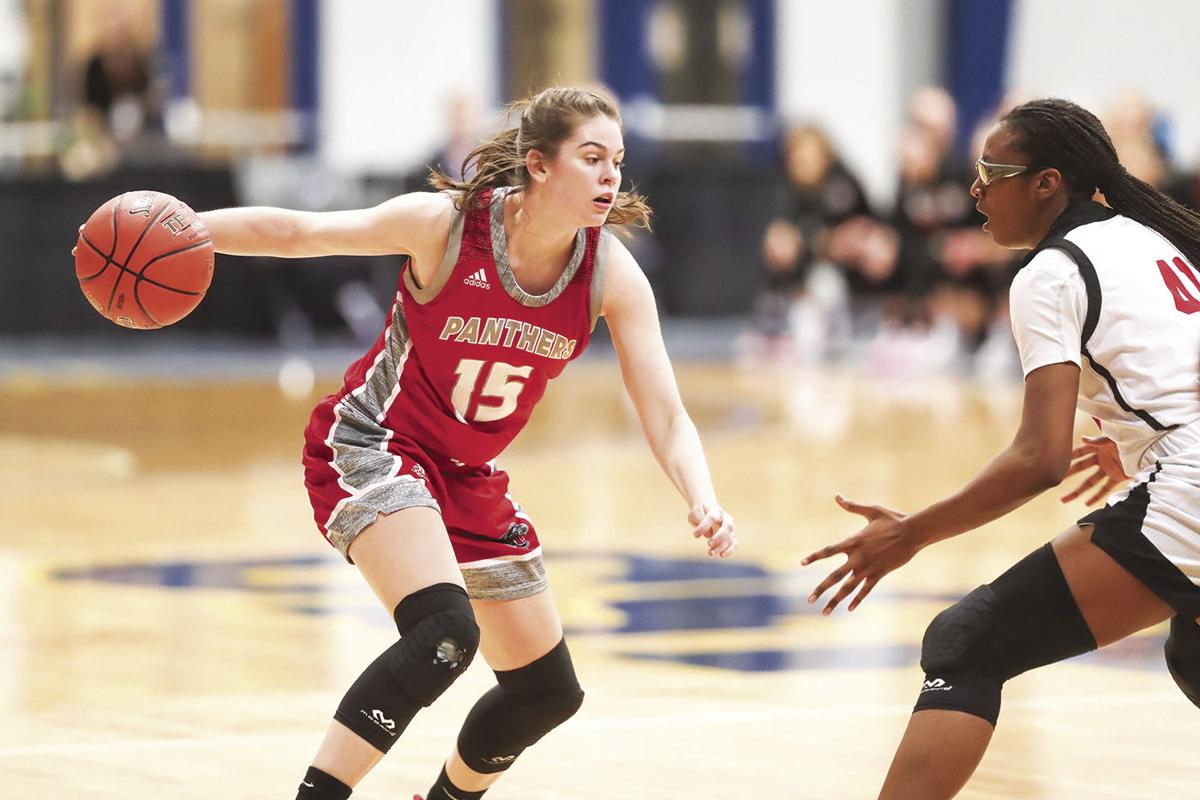 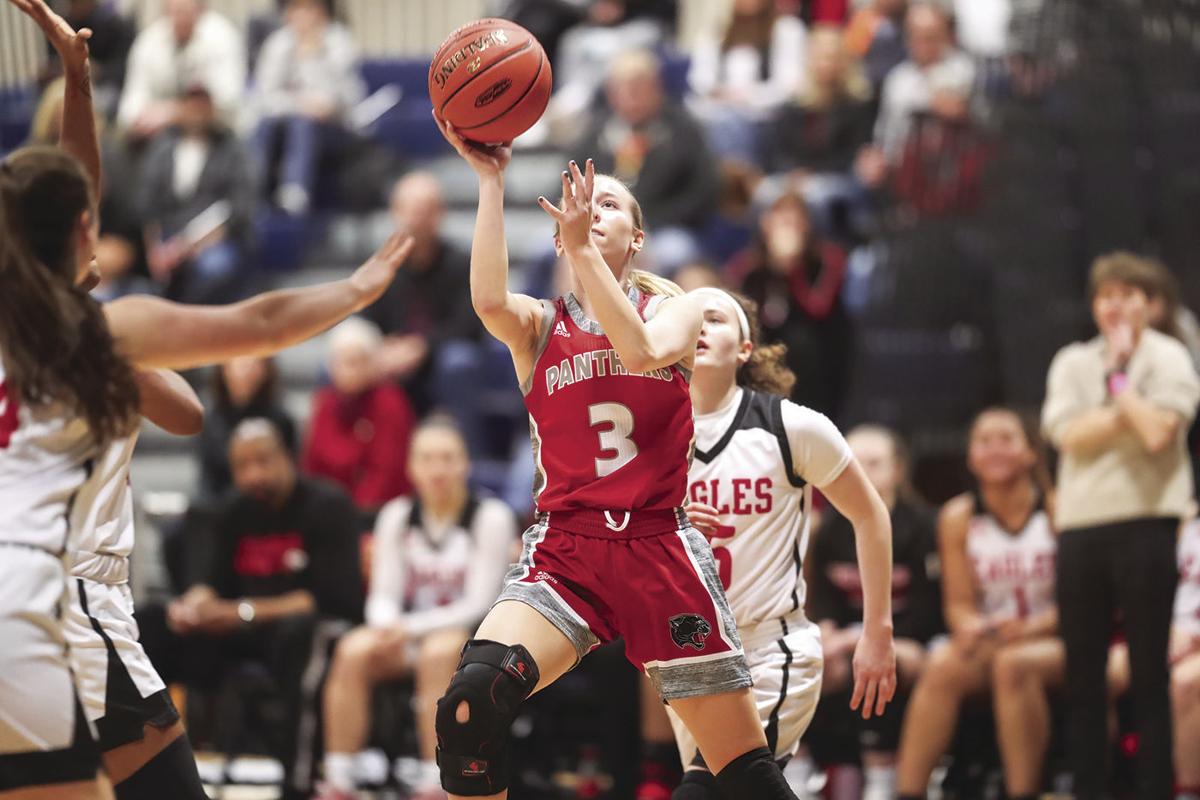 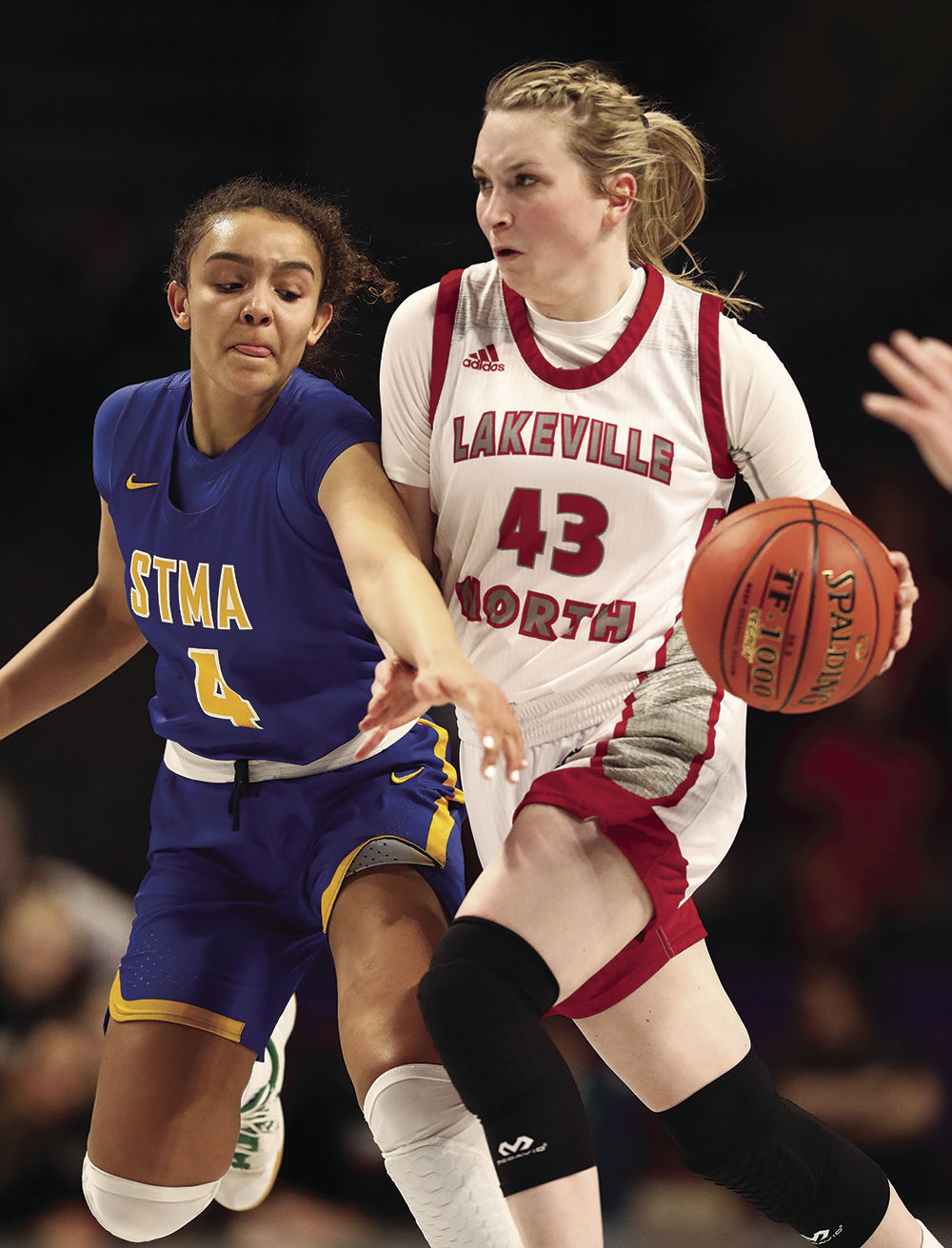 Lakeville North guard Lizzie Berkvam tries to get past a St. Michael-Albertville defender during a state Class 4A girls basketball quarterfinal game March 11 at Williams Arena.

Lakeville North guard Lizzie Berkvam tries to get past a St. Michael-Albertville defender during a state Class 4A girls basketball quarterfinal game March 11 at Williams Arena.

Then the players were told they should play the second half like it was their last – because it was.

The unprecedented circumstances that caused the early end of the high school winter sports season – and cast doubt on spring sports – left the Panthers as one of the teams caught in the middle. On March 11 they took the Gangelhoff Center court at Concordia University, St. Paul, for a Class 4A consolation semifinal game. In the first half, word began circulating via social media that the state tournament schedule was being cut short because of the coronavirus pandemic, and third-place and consolation games planned for March 12-13 would be canceled.

Lakeville North used the news to spark an inspired second-half rally to beat Eden Prairie 75-70 and finish its season 19-11.

“It was kind of weird. We found out at halftime that we weren’t going to play (the consolation final),” Lakeville North senior guard Lauren Jensen said. “I feel like for the seniors it gave us a boost because we knew it was going to be our very last game. It gave us extra fire. We came out ready to go.”

“When I knew it was going to be my last high school game ever I wanted to leave everything I had on the court and leave Lakeville North in a really good spot for next year, and show everyone that you have to play with all you’ve got no matter what,” Kuma said.

Lakeville North would have played Park Center in the consolation final. Instead, the Panthers went 1-1 in their fifth consecutive trip to the state tourney and sixth in seven years.

Jensen and Kuma combined for 55 of Lakeville North’s 75 points as the Panthers overcame an eight-point halftime deficit.

“We always go down fighting. We pride ourselves on not giving up,” said Jensen, who scored 30 points in her final high school game. “We were in a little foul trouble in the first half, which didn’t help, but there were a ton of players who stepped up.”

St. Michael-Albertville made a tournament-record 13 three-pointers in its 67-58 victory over North in the Class 4A quarterfinals March 11 at Williams Arena. Eleven of those threes came in the first half, when the Knights ran out to a 45-25 lead. The Panthers fought back in the second half, although the closest they could get was seven points.

“Coming into this tournament, and even in sections, we were the underdog,” Kuma said. “We always have the mindset that the game’s never over. It shows, and it brings us to great places.”

Jensen ended her career as one of the best players ever produced by a Lakeville North girls program that has turned out three Miss Basketball award winners. Jensen was a finalist for the 2020 award that went to Hopkins guard Paige Bueckers.

Jensen leaves as the second-leading scorer (girls or boys) in school history and one of only two with more than 2,000 points, Liz Podominick being the other. Jensen will continue her basketball career at the University of Iowa.

Asked how Lakeville North helped her become the player she is, Jensen said, “honestly, I think it’s the culture. Just growing up here and looking at all the players who came through this program. I was lucky enough to look up to them. I wanted to try to be like them and work hard.”

Kuma will be back at Concordia, St. Paul soon as she signed to play basketball for the Golden Bears. Last week’s game at the Gangelhoff Center “felt like my last but first game,” Kuma said. “It was cool to end my Lakeville North career here, and this is where my college career is going to start.”

How do you spend most free time with Stay at Home order?