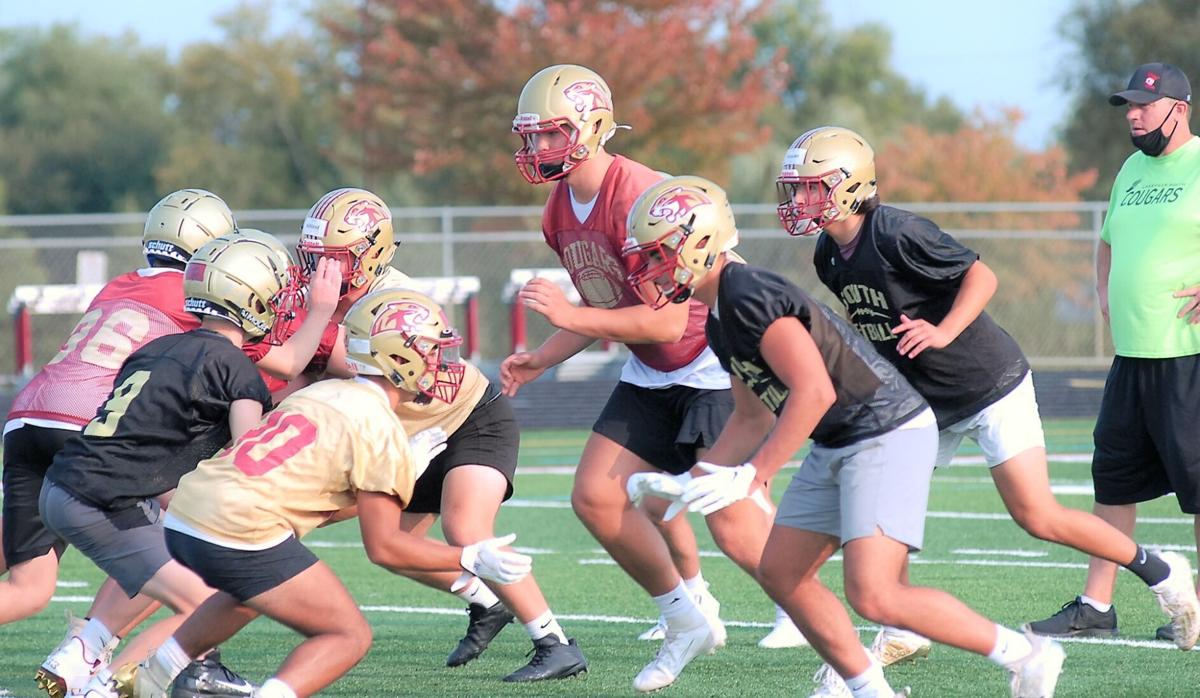 Football players such as Lakeville South's Riley Mahlman (center) will get a chance to return to the field this fall after the Minnesota State High School League board of directors reversed course Monday. 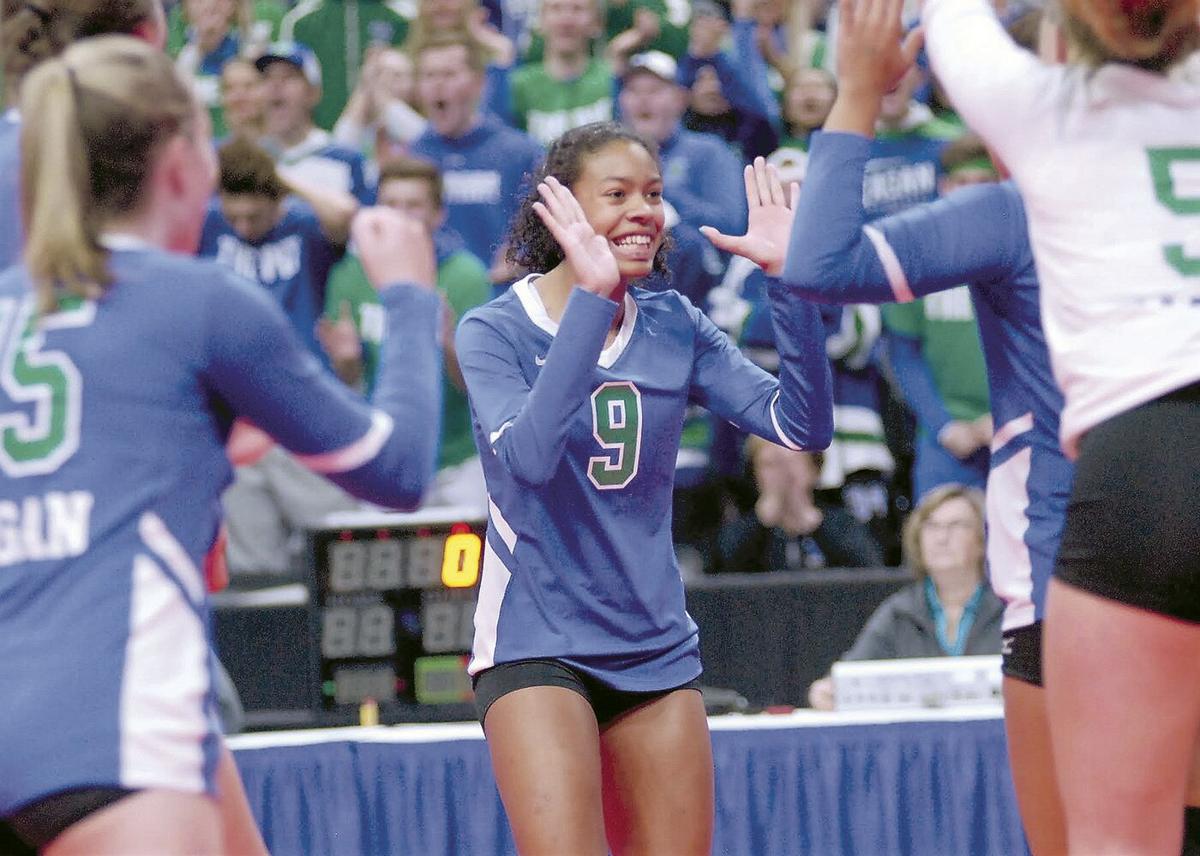 Eagan volleyball players celebrate after winning a key point during the 2019 state tournament at Xcel Energy Center. It's not known if they'll get a chance to return to the Xcel Center this year, but they will get to play soon after the fall season was reinstated by the Minnesota State High School League. The MSHSL reversed an August decision that moved volleyball and football to the spring because of COVID-19 concerns.

Football players such as Lakeville South's Riley Mahlman (center) will get a chance to return to the field this fall after the Minnesota State High School League board of directors reversed course Monday.

Eagan volleyball players celebrate after winning a key point during the 2019 state tournament at Xcel Energy Center. It's not known if they'll get a chance to return to the Xcel Center this year, but they will get to play soon after the fall season was reinstated by the Minnesota State High School League. The MSHSL reversed an August decision that moved volleyball and football to the spring because of COVID-19 concerns.

High school football and volleyball are back this fall, but their traditional postseasons are not.

On Monday the Minnesota State High School League board of directors voted to return the football and volleyball seasons to the fall, reversing an Aug. 4 decision that moved those sports to spring 2021 in response to the COVID-19 pandemic. Official practices in those sports will begin Monday, Aug. 28, with the first games taking place Oct. 8-9.

Monday’s special session was called after the MSHSL received considerable pushback on moving football and volleyball to spring. The MSHSL surveyed member schools last week and learned 80 percent wanted football to return to the fall and 76 percent wanted fall volleyball.

Those sports now are back near their normal places on the sports calendar, but with modifications. Football will be restricted to six regular-season games and a two-week postseason. Volleyball teams will get to play 14 matches but no regular-season tournaments. Volleyball season would run 11 weeks, including two weeks of postseson play beginning the week of Nov. 30.

Currently, there are no plans in place for state tournaments in any fall sport. On Monday the MSHSL released a postseason outline that ended playoffs at the section level. State tournaments were listed at “TBD” but appeared unlikely under the high school league’s timeline that called for the girls tennis season to end by Oct. 17, the soccer and cross country seasons to end by Oct. 24, and girls swimming and diving to end by Oct. 31.

The MSHSL board voted 15-3 to return football to fall and 14-4 to reinstate fall volleyball. Before Monday, Minnesota was one of 17 states not playing high school football this fall, according to the National Federation of State High School Associations.

Prior to Monday’s votes, the board heard from Dawn Gillman, a Dassel-Cokato football parent and organizer of Let Them Play MN, and Dr. William Roberts, chairman of the MSHSL sports medicine advisory committee and a professor at the University of Minnesota Medical School.

Gillman said her organization has met with members of Gov. Tim Walz’s staff and other state officials to make their case for fall football. She said they checked records from the Minnesota Department of Health and Centers for Disease Control and found “there have been zero deaths or hospitalizations related to sports” in Minnesota.

“We believe this is new information,” Gillman said. “Parents want to assume all risk and responsibility for their children. This is fundamental to us.”

Roberts, however, cautioned there hasn’t been much new information about the coronavirus since the MSHSL board’s Aug. 4 decision, and that information about its effect on high school athletes remains limited. A study of 26 Ohio State University athletes who tested positive found several with cardiac changes associated with myocarditis (an inflammation of the heart muscle), Roberts said.

“Even if you are asymptomatic and test positive, it can affect the heart muscle,” Roberts said. “The risk is there. We don’t know what the outcome will be for kids that get scarring of the heart.”

In some cases of high school athletes who have contracted the virus, Roberts said it isn’t known whether they got it through sports activity or social gatherings. Still, “I don’t know how we’re going to be able to put people face to face, breathing hard” in sports competition, he said.

Locally, girls soccer teams at Lakeville North and Eagan High Schools had to pause activities after contact with individuals who tested positive, although both teams have resumed playing. Prior Lake High School activities director Russ Reetz, also a member of the MSHSL board, said three of his school’s teams had to suspend summer activities because of COVID-19 concerns.

The MSHSL did allow soccer, cross country and girls tennis to start this fall, with few issues reported. Activities the MSHSL has done so far “have been largely successful,” executive director Erich Martens said. “The goals were to provide an experience sometime during the school year and do it safely.”

Once football games start, schools will be expected to adhere to the state guideline of no more than 250 spectators. Access to school buildings is restricted to “essential” personnel, meaning spectators aren’t likely to be allowed at volleyball games once the season begins. Spectators aren’t allowed at girls swimming meets at present, and a number of meets are taking place in a “virtual” format which has each team swimming in its home pool.

Volleyball coaches, including Eagan’s Kathy Gillen, expressed concern about the now-overturned decision to move that sport to the spring, citing conflict with the club volleyball season. Spring is a prime recruiting period for college volleyball, and coaches scout club tournaments heavily. In August, Gillen said she wasn’t sure any of her players would participate in a spring high school season.

In the past, high school and club volleyball programs have been careful about encroaching on each other’s seasons. Tryouts for club teams typically take place on a Sunday in November, one day after the final day of the high school state tournament.

The MSHSL fall sports postseason will begin Oct. 5 with the first day of girls tennis section tournaments. All competition will be team-only; there will be no individual singles and doubles tournaments. Teams will continue to follow the MSHSL guideline of no more than two matches per week. Matches will take place at local sites with the higher-seeded team being the host.

Girls section swimming and diving meets also would be multi-site events, with no more than four teams allowed at any one pool. Section meets would take place the week of Oct. 19.

Minnesota’s high school football season is expected to conclude by its traditional date of the last Saturday in November, which this year is Nov. 28. Bob Madison, the MSHSL associate director in charge of football, said outdoor football in Minnesota in December was a risky proposition, and the availability of indoor facilities is uncertain.

Board members considered two alternatives for football scheduling – a regular season of four or five games with a longer postseason, and a six-game regular season and two-week postseason. The board ultimately voted for the latter.

No decisions were made about a volleyball postseason, although that likely will be discussed at the next MSHSL board meeting Oct. 1.

The MSHSL is facing a deficit because of the expected loss of state tournament revenue, and Martens, the executive director, said the league has not budgeted for fall 2020 state tournaments.

The MSHSL board also voted to cancel the adapted soccer competitive season – which usually takes place in the fall – in favor of a fall training period. Teams can have eight training sessions through Oct. 23. This was done in consultation with the Minnesota Association for Adapted Athletics, MSHSL assistant director Rich Matter said.

Co-operative programs such as Dakota United and Burnsville/Farmington/Lakeville will be allowed to have coaches go to individual schools to conduct training sessions instead of having the entire group come to one place for practice.