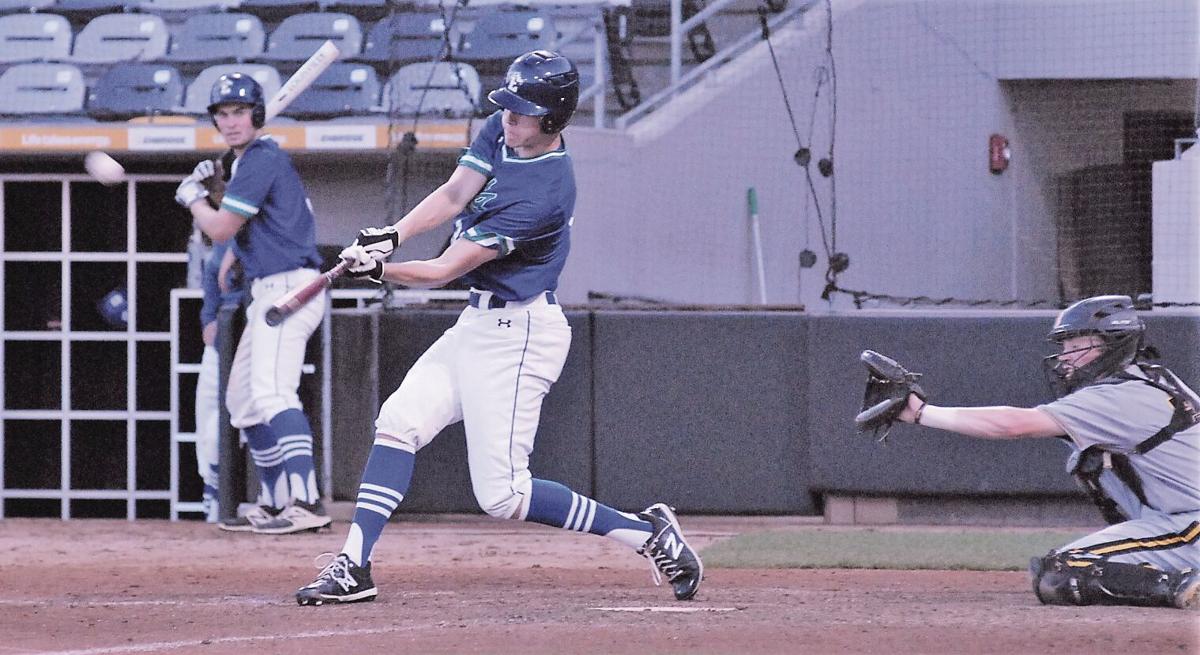 Eagan's Reese Ligtenberg sent this ball out of the park for his team's first run against Burnsville/Eastview at the Senior Class Salute on Sunday at CHS Field. The combined Eagan/White Bear Lake team won all three games in its pool to advance to this weekend's playoff rounds. 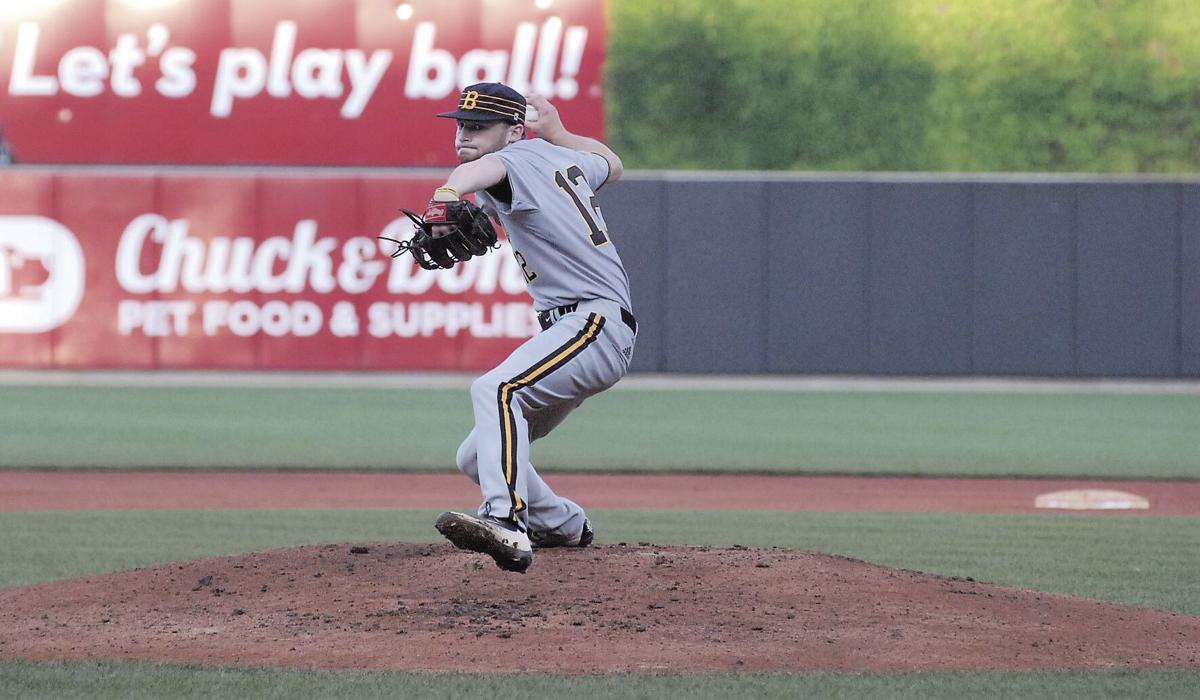 Sean Floersch pitches for Burnsville/Eastview at the Senior Class Salute on Sunday at CHS Field. 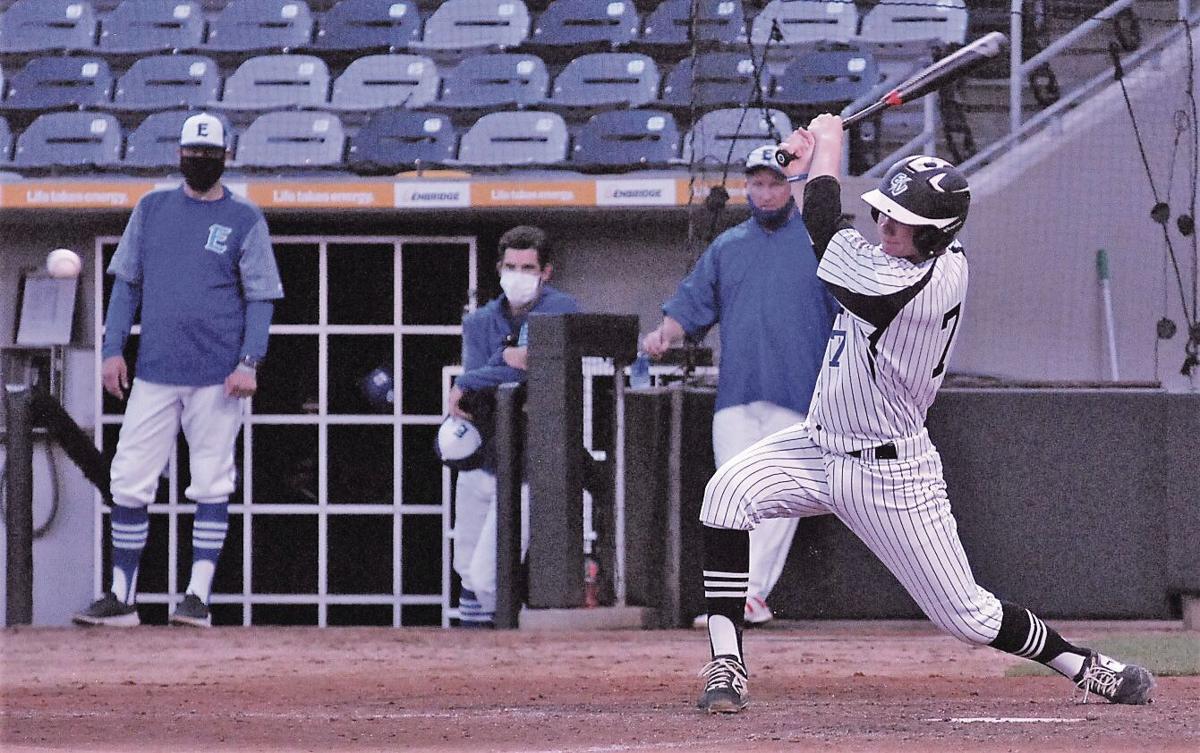 Caden Espinda Banick of Eastview puts the ball in play against Eagan at the Senior Class Salute.

Eagan's Reese Ligtenberg sent this ball out of the park for his team's first run against Burnsville/Eastview at the Senior Class Salute on Sunday at CHS Field. The combined Eagan/White Bear Lake team won all three games in its pool to advance to this weekend's playoff rounds.

Sean Floersch pitches for Burnsville/Eastview at the Senior Class Salute on Sunday at CHS Field.

Caden Espinda Banick of Eastview puts the ball in play against Eagan at the Senior Class Salute.

Eagan reaches playoff round of tournament

Eagan had ambitions of playing in the state high school baseball tournament – and, quite possibly, the talent to turn those ambitions into reality.

That chance was lost for reasons that have been well documented by now. But this summer, the Wildcats’ seniors were offered an opportunity to play in a tournament at CHS Field, which would have been the site of the high school Class 4A tourney.

It was, safe to say, not a tough sell. They jumped at the chance to play in the Senior Class Salute, a 24-team tournament for graduating seniors that was organized by the St. Paul Saints and Minnesota high school coaches.

“When this came up, we started sending around some texts and the messages were all like, ‘We’re doing this, right?’ ” said Eagan varsity head coach Steve Butler. “We have a really talented group of seniors and having their last season taken away was tough. So when we got this opportunity, it was a no-brainer for us.”

The Eagan team is identified as “Eagan/White Bear Lake” in the Senior Class Salute’s publicity. Because the event is open only to players who were seniors in 2019-20, many of the teams drew players from more than one high school. The Eagan/WBL roster is actually 11 Eagan seniors and about five players from other schools throughout the state.

They all wore Eagan varsity uniforms in their 2-0 victory over Burnsville/Eastview on Sunday night in pool play at CHS Field. “That’s me saying if we’re going to be on the baseball field we’re all going to wear the same uniforms,” Butler said.

Eagan defeated the Horsemen, a combined Mounds View/Irondale team, 10-9 in the first round of pool play July 22. A 2-1 victory over New Prague on Wednesday afternoon made Eagan the champion of its pool and sent the team to the tournament’s eight-team playoff round. Eagan plays a combined Tomahawk Conference team in the quarterfinals at 2 p.m. Friday at CHS Field. Semifinals are Saturday, with the championship game at 2 p.m. Sunday. More information about the Senior Class Salute can be found at saintsbaseball.com.

Burnsville/Eastview was 0-3 in pool play and will not advance to the playoff rounds.

Eagan had one light practice – catch, plus some hitting in the cage – before starting play in the Senior Class Salute. Some rust was evident in the opening game against the Horsemen, Butler said.

On Sunday, one of the non-Eagan players, left-handed pitcher and Hill-Murray graduate Mitch Gutknecht, threw a complete-game shutout against Burnsville/Eastview. Eagan graduate Reese Ligtenberg got his team on the scoreboard with a long home run to right field.

“Mitch pitched a great game and we played some really good defense behind him,” Butler said.

One of those fielders, Eagan shortstop Aidan Byrne, helped get Gutknecht on the roster for the Senior Class Salute. “They’re both going to Minnesota State Mankato to play baseball and will be roommates,” Butler said. “Aidan texted me and asked if he should try to get Mitch to play for us.”

“Ty had four hits in our first two games,” Butler said. “Aidan made a great catch for the last out of our game against Mounds View. They had the bases loaded with two outs in a one-run game and Aidan ran down the ball in space near the third-base line.”

Eagan’s senior class of baseball players showed up in force for the Senior Class Salute, but there’s still one noticeable absence. Assistant coach Steve Cullers isn’t with the team because of a brain hemorrhage suffered after being struck on the side of the head by a baseball on July 6. He is recovering but is not expected to be at the Senior Class Salute.

“We’re all thinking of him,” Butler said. “Between Steve, (assistant coach) Tom Buske and myself, we’re able to vet things in the dugout pretty quickly. Sometimes they have to talk me off the ledge.”

Cullers would have liked to see the Eagan seniors make this one last run, Butler said. “This is the first group our coaches have been able to see all the way through, from sophomore year to senior year,” said Butler, who took over as head coach in 2018. “They’re a close group, they work hard and they’ve been through a lot. I love to see them on the field and getting a chance to be around each other again.”