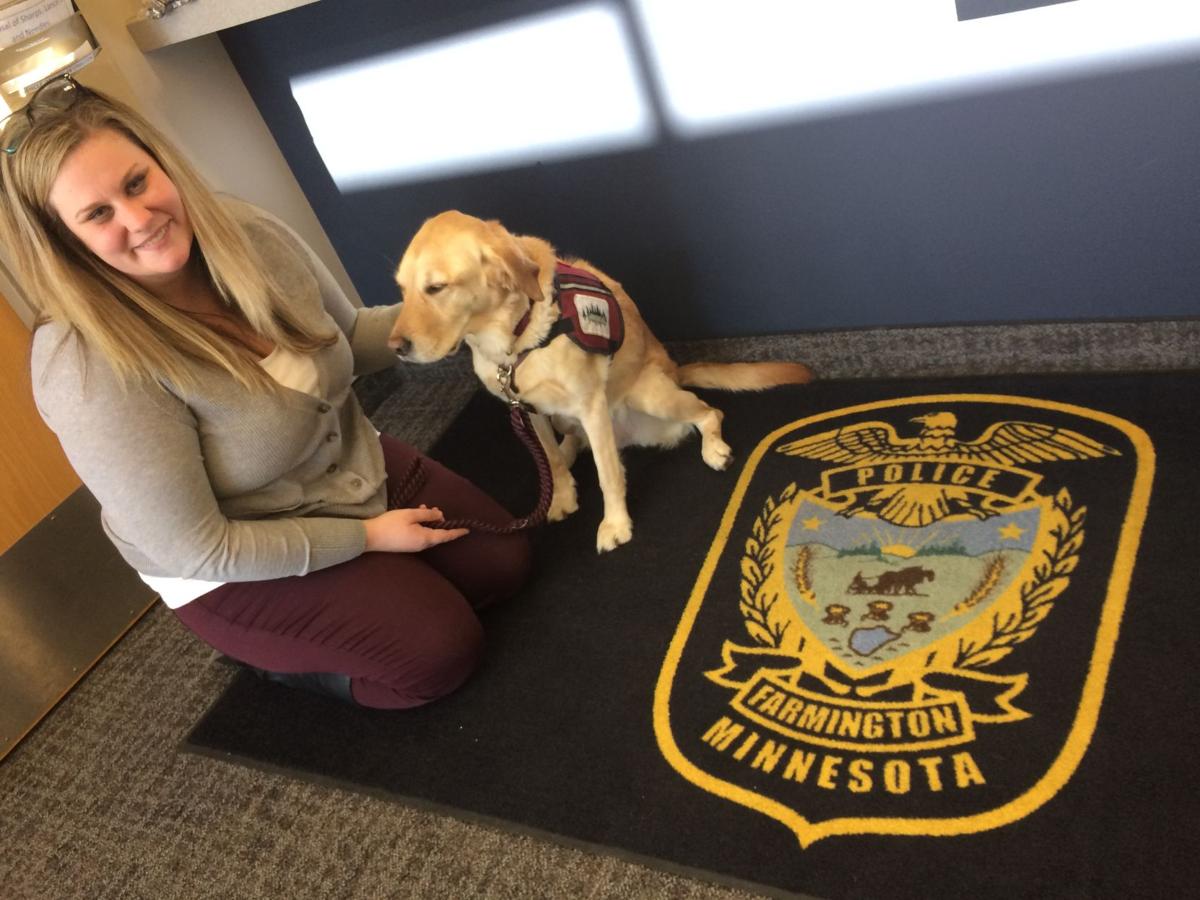 Heather Davis, an outreach advocate for 360 Communities Violence Prevention and Intervention, assists clients and works alongside the Farmington and Lakeville Police departments. She aids clients who face  domestic and sexual violence and stalking. 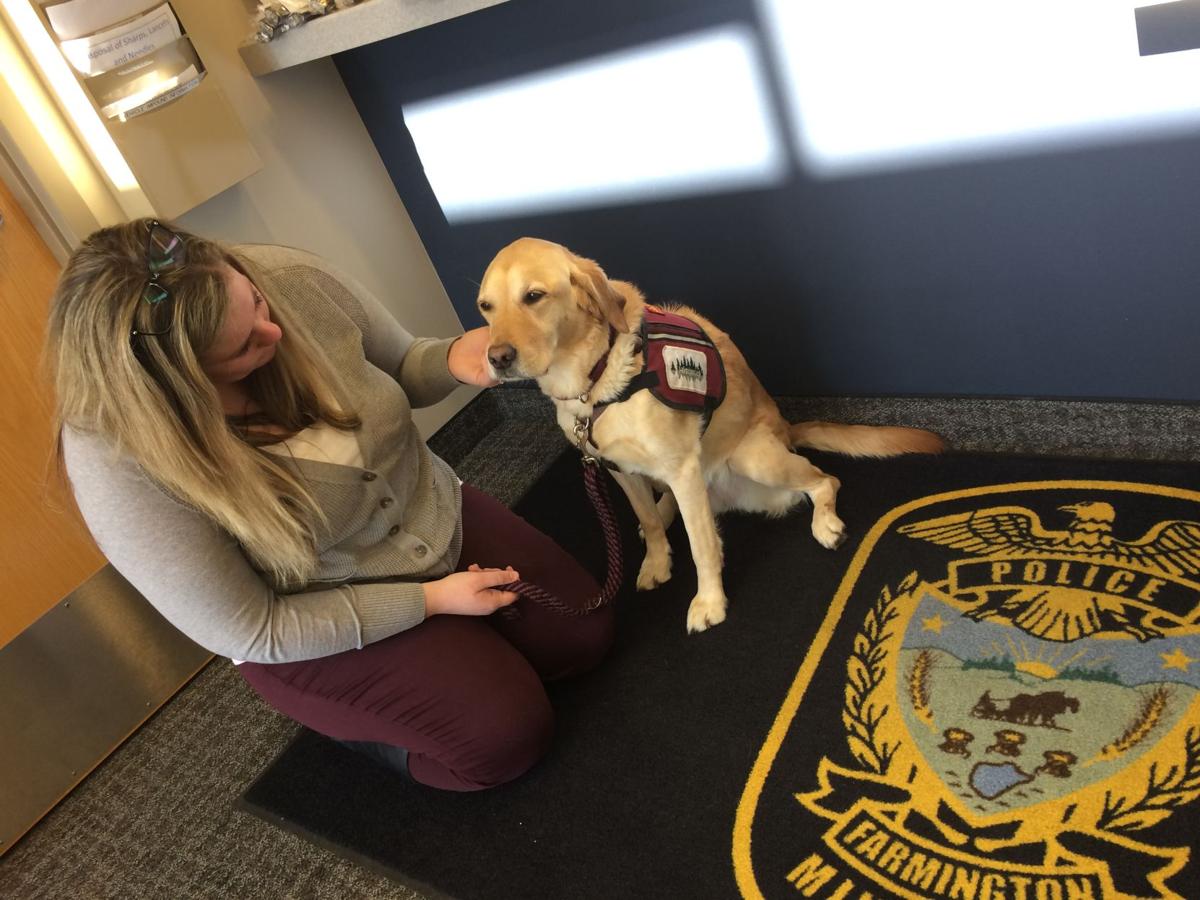 The 360 Communities victim support dog shown is Coco, who offers a friendly presence to calm clients. Ranger, the victim support dog in Apple Valley and Rosemount, works with those police departments. These two support dogs are the first two courthouse dogs in the state allowed into the courtroom to reduce a victim's anxiety during a restraining order hearing or a pretrial hearing inside a Dakota County courthouse.

Heather Davis, an outreach advocate for 360 Communities Violence Prevention and Intervention, assists clients and works alongside the Farmington and Lakeville Police departments. She aids clients who face  domestic and sexual violence and stalking.

The 360 Communities victim support dog shown is Coco, who offers a friendly presence to calm clients. Ranger, the victim support dog in Apple Valley and Rosemount, works with those police departments. These two support dogs are the first two courthouse dogs in the state allowed into the courtroom to reduce a victim's anxiety during a restraining order hearing or a pretrial hearing inside a Dakota County courthouse.

Filing an order for protection with the courthouse can be challenging for victims of domestic and sexual violence.

Heather Davis, an outreach advocate for 360 Communities Violence Prevention and Intervention, assists clients and works in collaboration with the Farmington and Lakeville Police departments. Sometimes she offers support to victims of domestic and sexual violence or for those who are being stalked.

The county-wide 360 Communities program founded 40 years ago uses community engagement to positively shape the future of cities. The nonprofit works in partnership with residents to create change that aims to build better and healthier futures for residents.

“Farmington is not facing any other challenges in domestic violence than any other south metro community. We are busier in Lakeville because it is a little bigger,” Davis said.

With an educational background in victim studies, Davis is currently working to earn her master’s degree in victim services management.

“I spend half the time in criminal justice and the other half of my time in psychology classes that are tailored to what I am doing,” she explained.

Davis, who is on call 24-hours a day, said her day-to-day job is client driven and she offices in Lakeville a few days a week and at the Farmington Police headquarters on Fridays. When Farmington Police Chief Gary Rutherford took over the department, Davis explained this was an opportunity to offer a secondary office location.

“We have always been responsible for supporting the Farmington Police Department, but it is so different when you are face to face and the goal in Farmington is to move toward a DART (Domestic Abuse Response Team) in the next year,” Davis said. This will be a trained group that will learn how to properly respond to domestic violence.

Outreach advocates respond to clients who need emotional support and may be in the hospital, at two emergency shelters or need to make an appearance in a court room. A team of advocates work alongside 12 law enforcement departments that includes the Dakota County Sheriff’s department.

“It is not fun to talk about domestic violence because it tends to make people feel uncomfortable but it happens everywhere even in your backyard,” she said.  “I am the only entity that can report and be with somebody all the way through court, and I can be the one person who can be with them through the whole process.

She said most of the time that is women but they serve all genders.

Last year there was a demand in Dakota County for outreach advocates services. Records show 2,893 individuals were served by this violence prevention program that included support given to 360 children, according to Tony Compton, director of marketing and communications for 360 Communities.

“There were 2,265 individuals supported with orders for protection and harassment restraining orders, and 452 total residents at our two Lewis House domestic and sexual violence shelters and more than half were children,” Compton said.

For clients who are abused, Davis may help them develop an escape plan to leave the home, aid them in writing a restraining order or refer them to a lawyer.

“My role is facilitating whatever the victim’s journey to healing is and how to get them out of that cycle of violence and gain their independence,” Davis said.

Davis is proud to work with 360 Communities victim support dog Coco, who is a 7-year-old golden retriever and yellow lab mix. Coco offers children and adults comfort by putting her head in their laps and allowing them to pet her. A victim support dog named Ranger offers emotional support to clients in Apple Valley and Rosemount as part of the two city's police departments collaboration.

Davis said Coco and Ranger were the first two courthouse dogs in the state allowed to accompany victims into the courtroom. Their job was to reduce a victim's anxiety during a restraining order hearing or a pretrial hearing inside a Dakota County courthouse.

“Ranger and Coco are the only two who can go into the courtroom for restraining order hearings and we might go to a pretrial hearing to provide that emotional support,” Davis said.

The dogs reduce anxiety when victims may need to interviewed by police.

"Coming to a police station can be really scary and to see how the dog is really comfortable with the police, they (clients) can see how police officers really help, and Coco can break that touch barrier in a way that I can’t and she can come up and approach you and put her head in your lap,” Davis said.

“We are really lucky we have law enforcement that allows us to come in and develop these partnerships because not everywhere in Minnesota is that happening," Davis said. "This is fairly innovative because there are plenty of advocates that have a victims advocate, but actually having a community advocate that comes in to the police department is huge, and it is so different and beneficial.

"I think a partnership like this is so crucial to helping the people in our community get out of these situations because the offices can focus on law enforcement and the crime and the criminal, and I am on the other side helping the victim get into a safer situation."