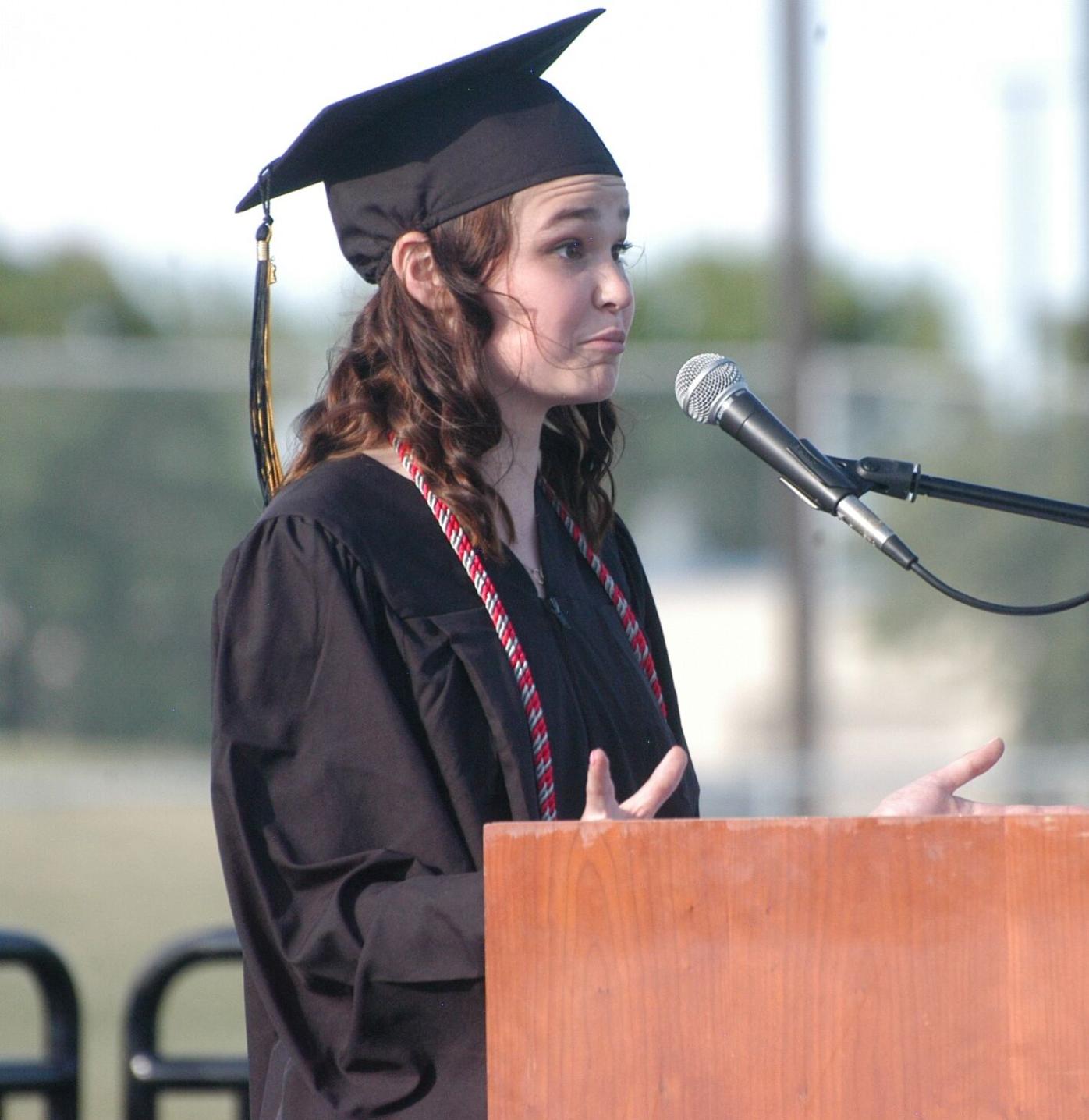 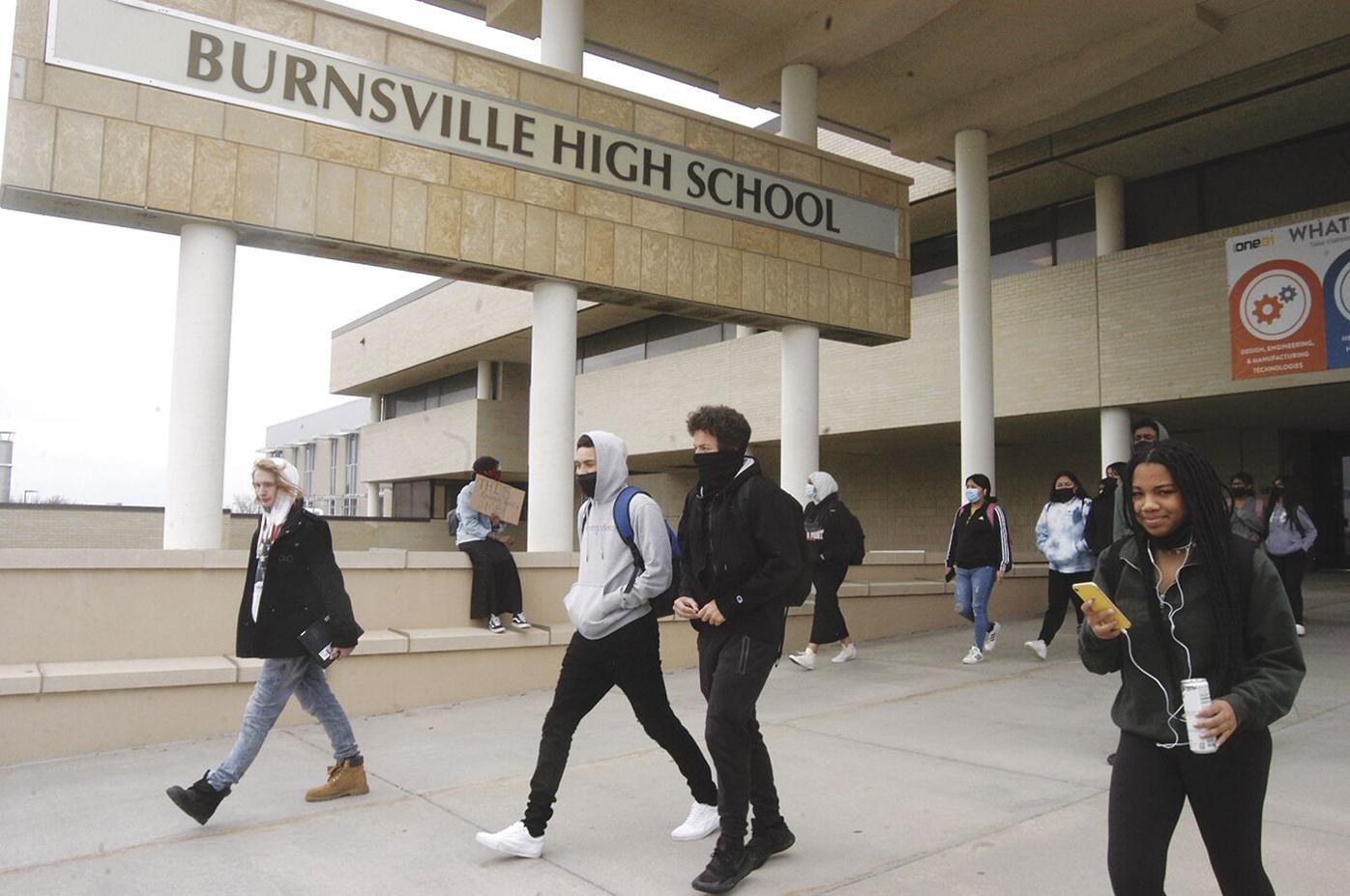 Students at dozens of Minnesota schools, including about 100 at Burnsville High School, walked out at 1 p.m. Monday. April 19, to protest racial injustice and the killing of Daunte Wright by a Brooklyn Center police officer. One of the students, junior Amina Sheik, held a sign as classmates filed past. The walkout was organized by Minnesota Teen Activists. BHS administrators didn’t stop students who chose to participate, and staff members were present during the event, which included a student gathering at Bob Pates Stadium.

Students at dozens of Minnesota schools, including about 100 at Burnsville High School, walked out at 1 p.m. Monday. April 19, to protest racial injustice and the killing of Daunte Wright by a Brooklyn Center police officer. One of the students, junior Amina Sheik, held a sign as classmates filed past. The walkout was organized by Minnesota Teen Activists. BHS administrators didn’t stop students who chose to participate, and staff members were present during the event, which included a student gathering at Bob Pates Stadium.

The year 2021 didn’t deliver the return to “normalcy” families and educators had longed for.

From the pages of Burnsville-Eagan Sun Thisweek, here are 2021 news highlights — COVID-19 and otherwise — in District 191.

The 2020-21 school year ended on a high note, with a return to in-person graduation at Burnsville High School’s Pates Stadium. The 2021-22 school year opened with a mask mandate and kept officials playing defense as cases and concerns mounted.

“I must tell you, I am exhausted from COVID,” Superintendent Theresa Battle told the School Board Nov. 18, just days before she announced a two-week school closure. “And a few days ago my staff, they just had to lift me up to say we have to continue. It’s very hard. I wish I could take this mask off right now. We just have to persist and continue with our priority.”

With elementary students already back in school, Battle announced April 22 that rising case numbers in the community scuttled plans to expand in-person learning for middle and high school students from two days a week to four to finish the 2020-21 school year.

Instead officials looked to the fall. In a sign that normalcy remained out of reach even in fully reopened schools, the board unanimously approved in August a resolution requiring students, staff and visitors 3 or older to wear masks inside district buildings, regardless of COVID-19 vaccination status.

On Nov. 18 administrators rang alarm bells in a report to the board.

A total of 446 students were home from school “due to the effects of COVID” as of Nov. 12, according to Bernadette Bien, lead licensed school nurse. Over a three-week period the number of contract-tracing investigations of students who tested positive and were infectious in school rose from 21 to 30 to 37, Bien said.

A total of 176 students had tested positive during the school year, with 26 new cases in the previous week, according to Bien. A total of 125 cases prompted investigations, she said.

A total of 44 staff members had tested positive, with total case investigations rising to 37 from 32 in the previous week, she said.

Cases among Minnesota children ages 5 to 11 “have surpassed all previous peaks,” Battle said. Test positivity rates were 12.18% in Dakota County and 15.57% in Scott County.

Four days later the district announced it would switch to distance learning for most students from Wednesday, Nov. 24, through Friday, Dec. 3.

“By taking this action now, we get a 12-day break from potential in-school transmission while being in distance learning for just six days,” the announcement said.

Battle further explained her call to close schools at the Dec. 9 board meeting.

“We were also seeing spread among our students in school. In fact, three schools had classrooms where three or more students tested positive for COVID.”

During the week of Nov. 15 the district was able to fill only 65% of its substitute teaching slots, leaving teachers, counselors, administrators, media specialists and licensed administrators to staff classrooms.

“The strain on our system was immense,” Battle said.

District food services, which have had to expand during the pandemic, are challenged. Several outstate districts have been dropped by their primary food distributor, Lisa Rider, executive director of business services, told the board Nov. 18.

District 191 hasn’t had to, but it’s a continual strain to assemble meals amid staff absenteeism and some supply shortages, Rider said. Some menus have had to change on “last-minute notice,” she said.

A report on students’ academic performance in 2020-21 told a “very, very difficult data story” about learning interrupted by the pandemic, an administrator told the board Nov. 18.

“I recognize that it is difficult to hear the story of how emergency pandemic conditions impacted so many of our learners in a negative way,” said Imina Oftedahl, director of curriculum, instruction and assessment.

All district students spent “significant time in full distance learning” during the 2020-21 school year, some the full year, Oftedahl said. A partial return under hybrid learning provided 50% to 75% live instruction, she said.

“Last year I shared our winter data for our elementary students that showed them maintaining their performance levels in almost all cases,” Oftedahl said. But the “ongoing shifts of learning models, hybrid scheduling and the relative isolation of the small pods have taken their toll from the winter to the spring.”

‘We don’t need the pity’

Previewing their June 11 speeches in interviews, graduation speakers for the Burnsville High School Class of 2021 projected positivity about the state of youth during the pandemic.

“We don’t need the pity,” said Andrew Bunnell, who gave a joint speech with his twin sister, Alexis.

“We’re going to try to talk about how strong we are as a class and what we’ve overcome, but not so much focus on the negatives,” Alexis said. “Because I think as a class, we’ve already gotten that from everyone, so I think it’s time to start being positive and looking toward the future and all that’s to come.”

Said fellow speaker Zoe Lewis: “I definitely think it has been a difficult year, but I’ve chosen to look at it from a different light. This year has taught us so many ways to communicate creatively and love the things we love in different ways and connect with people as we disconnected, which is a life lesson.”

For the first time, senior team member Joe Schatz said he went into the state championship with a sincere belief Burnsville could win it all.

“I have been doing this for a long time now,” Schatz said. “I’m the only person still from the high school team four years ago, and this is the first year I’ve ever beaten Wayzata ‘A,’ and it’s fabulous.”

A last-minute rush of students into the district’s new Virtual Academy had officials scrambling to properly staff the program in the secondary grades.

A spring parent survey suggested enrollment of about 180 secondary students in the online school that debuted this year, Sovine said. Registration numbers in July and August were relatively flat, he said.

“We didn’t see this coming until we were there,” he said.

The school resource officer program at Burnsville High School won a vote of confidence Jan. 28 from members of the School Board.

The board discussed the program in a workshop prior to the March renewal of a contract with the Burnsville Police Department.

The assignment of uniformed officers to public secondary schools has come under increased scrutiny in recent years, particularly since the Minneapolis police homicide of George Floyd in May.

The Minneapolis and St. Paul school districts abruptly ended their police contracts after Floyd’s death. Even some residents of neighboring Rosemount-Apple Valley-Eagan District 196 have called, unsuccessfully, for ending its officer program.

In three recent forums of BHS students, staff and parents, most said they want to continue the program, Principal Dave Helke said.

A brisk round of negotiations produced a new teacher contract with the Burnsville Education Association.

In contrast with past negotiations, the district and the teachers union reached a tentative agreement before the current two-year contract expired on June 30. Teachers voted their approval on July 13. The School Board approved the 2021-23 contract July 19.

The contract gives teachers salary-schedule increases of 1.95% each year, said Wendy Drugge, president of the BEA, which represents about 600 employees. It raises the district’s match to teachers’ 403(b) retirement accounts for the first time since 2014, she said. The increase is $500, according to the district.

The election was held to fill the vacancy left by former Board Member Jen Holweger, who resigned in October 2020. The board gave Said a temporary appointment last December, but state law required a special election this year to fill the remainder of the four-year term, which runs through 2022.

Said first ran for the board in November 2020, losing to incumbent Eric Miller and fellow first-time candidates Toni Conner and Anna Werb.

Despite a projected $10.86 million deficit, the district will balance next year’s budget without raising class sizes or cutting millions in programs, staff and services.

The 2021-22 budget plan, approved in June, tackles the general fund deficit with $5.96 million in fund reserves, $3.9 million in federal COVID-19 aid and $1 million in savings from “right-sizing” for enrollment decline.

The district continued to shed students this fall, continuing a trend of declining enrollment that began in the late 1990s.

The district continues to lose far more students outside its boundaries than it takes in.

The number of district residents attending school elsewhere — including other public districts, private schools and charter schools — grew from 1,436 in 2011-12 to 3,154 last school year, according to the enrollment report.