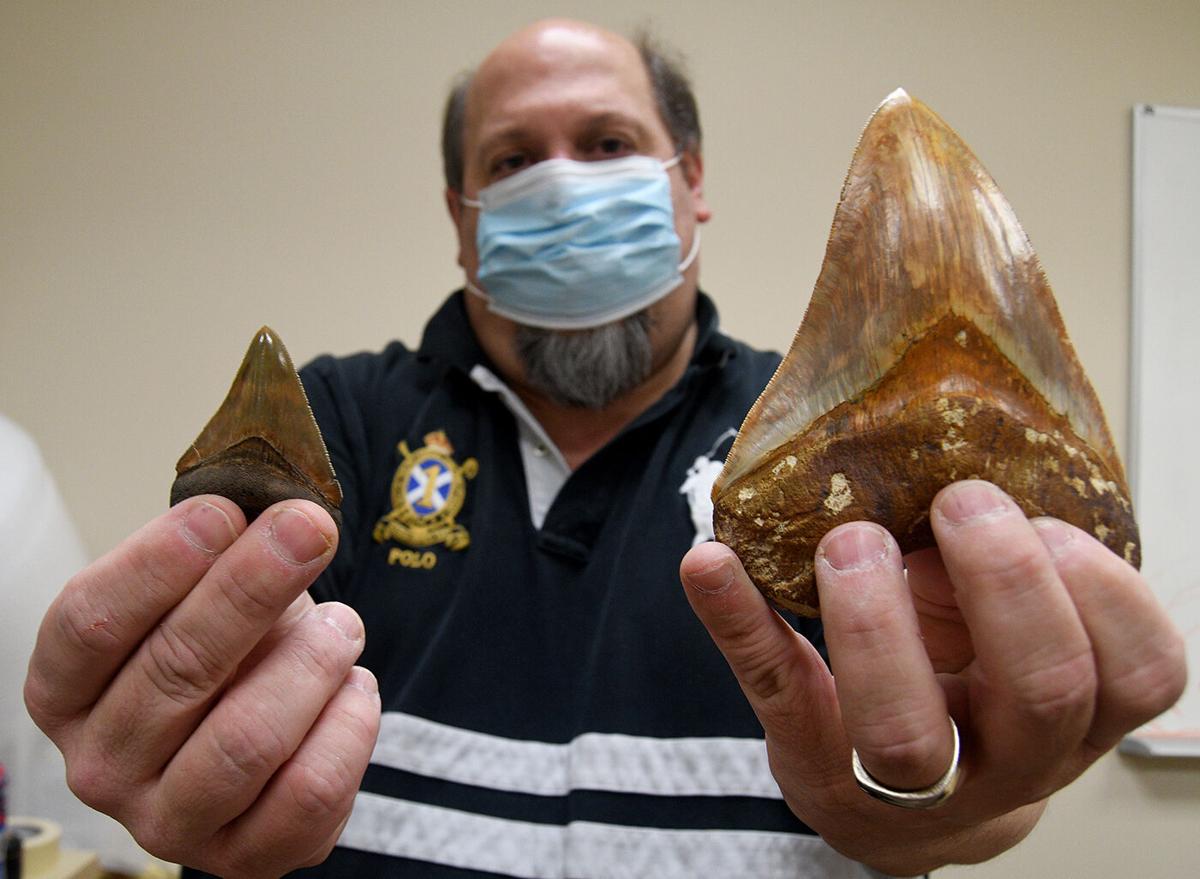 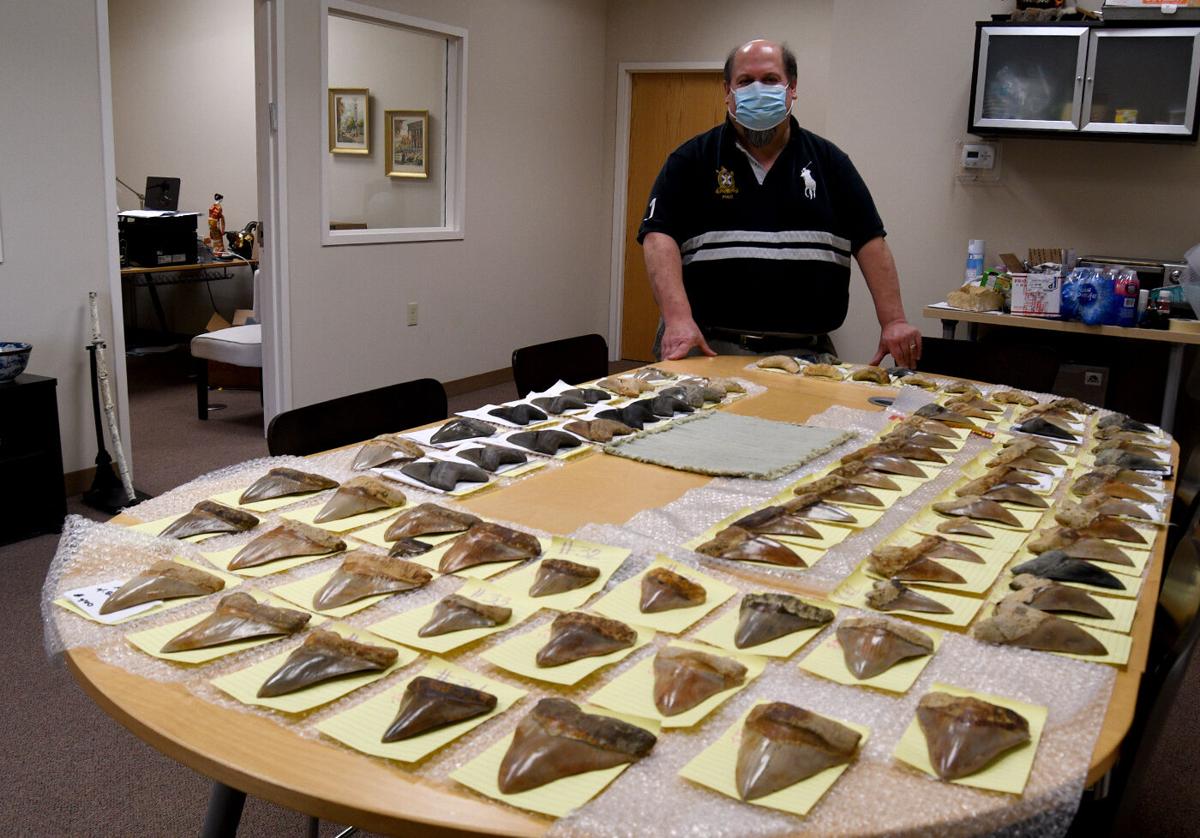 Gary Goldberger shows off part of a collection of megalodon teeth that will be sold through auction houses and private sales in the next 30 days. 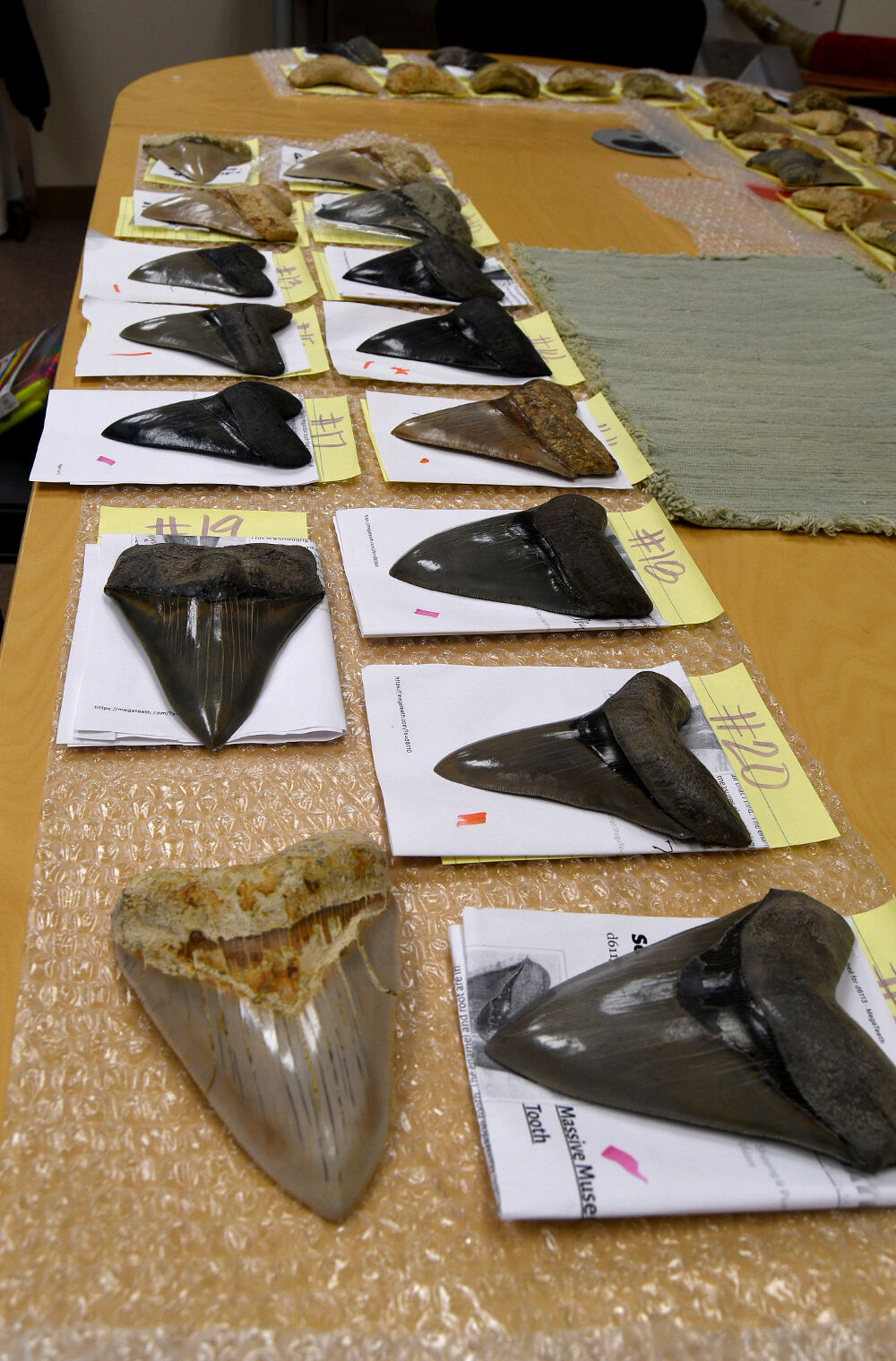 Gary Goldberger says his lifelong collecting hobby started with marbles and agates as a child.

As an adult, he’s also collected pottery, artwork and gems. About 10 years ago, his passion for prehistoric shark teeth was piqued after he purchased a shark tooth necklace as a gift for his father at a fair.

Goldberger said as the years went along he got more and more interested. He’s built and sold collections he’s had and purchased other people’s collections.

“It’s a hobby. You know, I feel everyone needs a hobby and now the hobby has become very big,” he said. “Because the wife’s the boss at home ... I’m only allowed to keep so many collectibles.”

Goldberger has lived in Dakota County most of his life, growing up in Mendota Heights and raising his family in Eagan for 21 years. He now resides in Inver Grove Heights. He’s one of the owners of a business in Apple Valley that supplies food items to places ranging from prison systems to white tablecloth restaurants.

He has collected several types of prehistoric shark teeth, but his favorite is Carcharocles megalodon, known colloquially as megalodon.

Megalodon is an extinct animal that is considered to be the largest shark and largest fish that ever lived. “Fossils attributed to megalodon have been found dating from the early Miocene Epoch (which began 23 million years ago) to the end of the Pliocene Epoch (about 2.6 million years ago). The word megalodon, a compound of Greek root words, means ‘giant tooth,’” according to Britannica.com.

Britannica says data suggests adult megalodons had a mean length of 58.7 feet, though some scientists estimate some megalodon sharks may have measured up to 82 feet. Megalodon’s bite diameter is several times larger than today’s average sized sharks.

Megalodon teeth have held the most fascination for Goldberger in part because of the diversity of the tooth colors and where they’re found around the world. Teeth can be purple, blue, red, black, gray, yellow, green and cream colored depending on where they were found. They can be found in oceanic and fresh waters, as well as on land.

“The colors come from the makeup of the sediment that they’re in when the animal sheds the tooth or dies,” he said.

Goldberger said megalodon teeth can range in size from an inch to over 6 inches in size but the average from what he’s seen is about 3 to 4 inches.

A few years ago, Goldberger started selling megalodon teeth to help fund his collecting hobby. He and some partners started a side business called The Megman, which only sells high quality teeth through auction houses such as Christie’s, Sotheby’s, Bonhams and Heritage Auctions or private sales to other collectors, he said.

“It became a fun hobby for me to work with these people to increase the value and the quality of the megalodon teeth they were selling,” he said.

Goldberger said the quality of a tooth is affected by the color, size and any damage it has. Teeth with no restoration work done to them are worth more.

Goldberger said he’s only ever sold the teeth individually.

Most of the teeth Goldberger has acquired since he started collecting have come from the United States. More recently he’s started getting some from overseas locations like Indonesia, where it’s legal to import them from. He only buys teeth directly from the divers and excavators who find them, he said.

Goldberger said he and his partners have been putting together a collection of over 200 “echelon” megalodon teeth; most being over 5 inches long and in pristine condition. The teeth are being stored in Minnesota and Georgia and will be sold within the next 30 days through a mix of auction houses and private sales.

When asked what his next plans after this collection sells, Goldberger said he would keep buying more “because there’s always auctions.”

Goldberger said he hopes the next generation will be as fascinated with megalodon teeth and other prehistoric creatures as he has been. He enjoys teaching children and young people about them.

He’s donated some of his prehistoric finds to museums, including the Science Museum of Minnesota. He’s sold and displayed pieces as a vendor at the Dakota County Fair two times, he said.

“When you look at some of those teeth that are in the exact shape they were when they were in the shark’s mouth, the pristine nature of them, it’s amazing to think about,” he said. “That’s what draws me to collecting them.”