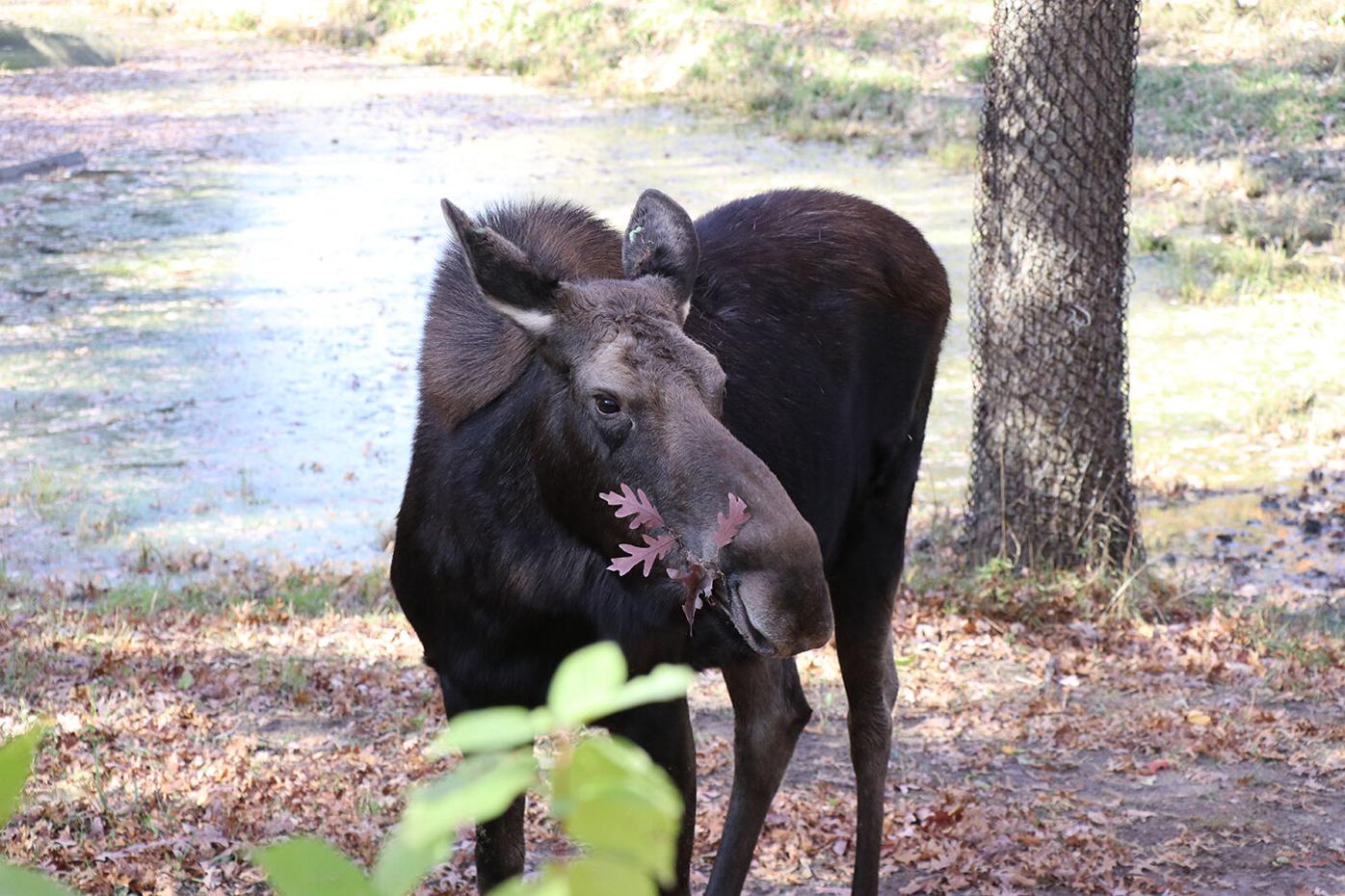 One of the Minnesota Zoo’s moose munches on leaves inside of its exhibit in 2020.

Moose Mission users get the chance to manage a moose herd through all four seasons by adding different elements to their habitat, with the goal of maintaining a healthy population size.

Moose Mission users will get a report of how their moose herd’s population fared through the year and what badges they earned at the end of the game.

One of the Minnesota Zoo’s moose munches on leaves inside of its exhibit in 2020.

Moose Mission users get the chance to manage a moose herd through all four seasons by adding different elements to their habitat, with the goal of maintaining a healthy population size.

Moose Mission users will get a report of how their moose herd’s population fared through the year and what badges they earned at the end of the game.

Minnesota Zoo visitors have been able to learn about and see moose in person since the zoo opened over 40 years ago. Now, the zoo is offering another way to experience one of the state’s iconic animals.

People have the chance to manage a habitat to create a healthy moose herd through “Moose Mission,” a new online learning platform that includes an interactive web game and facts about what’s been happening to Minnesota’s moose population in recent years.

Nicki Mattson, an interpretive program developer for the zoo, said the aim of the project was to pull together top moose researchers in Minnesota, have them share their key findings and present the information more broadly with zoo guests along with updating the learning tools at the zoo’s moose exhibit.

The project was supported through funding from the Minnesota Environment and Natural Resources Trust Fund as recommended by the Legislative-Citizen Commission on Minnesota Resources.

“One of the outcomes of the project was this online learning game where ... players are allowed to sort of play the role of a moose or a natural resource manager,” Mattson said. “You have a population of moose and you have a year to sort of manage this population.

The game became available to the public Oct. 19 at moosemissionmn.org after the development process began in March. The zoo worked with a developer based in Portland, Oregon.

The game can be played relatively quickly, depending on how much time the user takes to read through everything, Mattson said.

Players manage their moose herd through three main elements: deer, which share food sources and predators and can spread disease; predators that can affect populations and different trees and lakes that give moose food, cover and water.

A bar on the bottom of the habitat screen shows the moose population as “low,” “healthy” or “over.” Players will see five icons on the right: spruce, aspen, lake, deer and wolf. These can be dragged and placed into the habitat as the herd progresses through the different seasons. Players can earn badges along the way for successfully managing different aspects of the habitat and herd.

While the game’s target audience is fifth- through eighth-grade students, adults may find it appealing too, Mattson said.

“It’s interesting enough and engaging enough and appealing enough and sort of universally understood that if you’re not in that fifth- or eighth-grade range, you’ll still understand and gain some knowledge from the game,” she said.

The website also contains information about moose adaptations, its habitat, factors that affect moose population and the latest moose research. The zoo obtained information from researchers working for tribal communities, the Minnesota Department of Natural Resources, Voyageurs National Park, and the University of Minnesota. The researchers presented their findings during a two-day workshop in August 2020, Mattson said.

According to the zoo, moose nearly disappeared from the northwestern part of the state by 2007. The northwestern population is estimated to be 100 individuals; small enough that researchers have stopped doing yearly surveys.

Minnesota’s other population of moose in the northeastern portion of the state has declined by approximately 64% since 2006.

“Really the best answer is it’s complicated,” Mattson said of the possible reasons the moose population has declined in Minnesota. “The biggest contributing factors are disease and parasites ... predators do have an impact.”

Mattson said there’s also some evidence that may point to climate change as a contributing factor.

“We know that when we have a mild winter, more ticks survive the winter and when more ticks survive the winter then moose have more problems with ticks,” she said. “We know that when we have a warmer summer, or even a warmer winter, moose behavior changes. They don’t go out and feed like they normally would. And so they maybe go into the winter season not in prime health, which means over the winter, they’re more likely to be eaten by a predator, or ... more likely to have issues with a parasite.”

As of Nov. 4, the Moose Mission site has had about 1,000 unique visitors, according to the zoo. Mattson said she hopes the site and signage at the zoo will not only educate but that “someone is inspired to maybe want to go into the fields.”

“There’s a lot of things I want to come out of the work. I mean, I think it’s just fascinating, the amount of time and effort and brain work that has gone into all of this research,” she said.