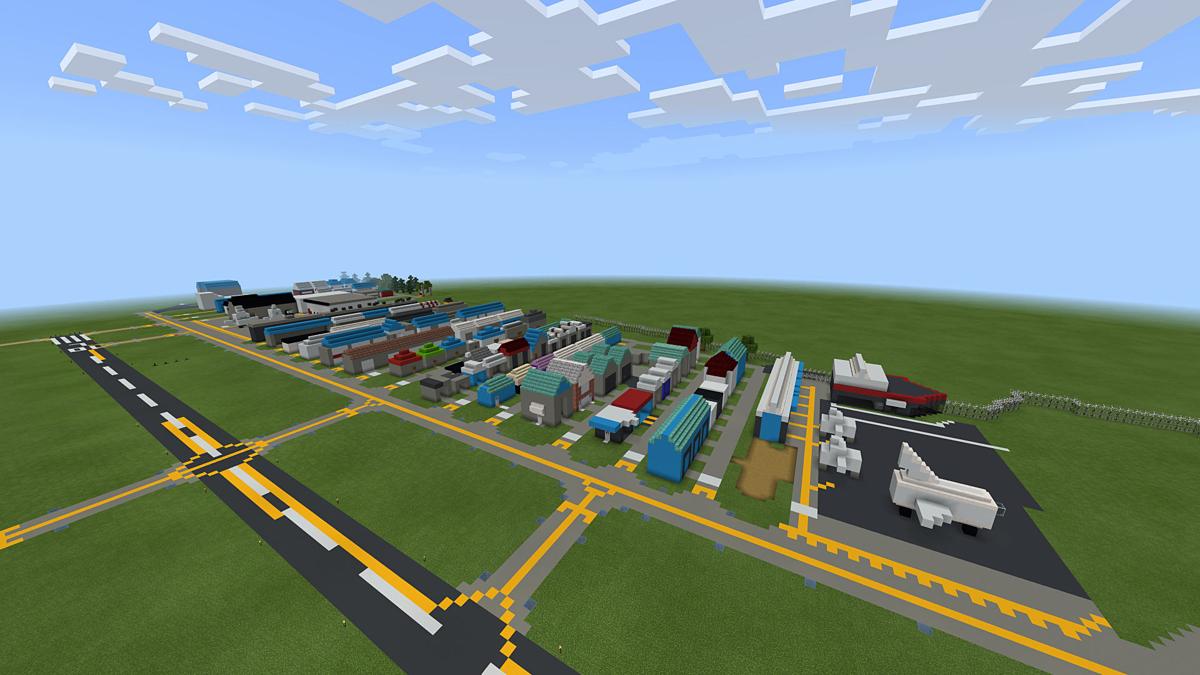 A daytime view of a Flying Cloud Airport model created in Minecraft. The model was made by a team of five Dakota County elementary school students who won first place in the FAA’s new Aviation and Space Education Airport Design Challenge. 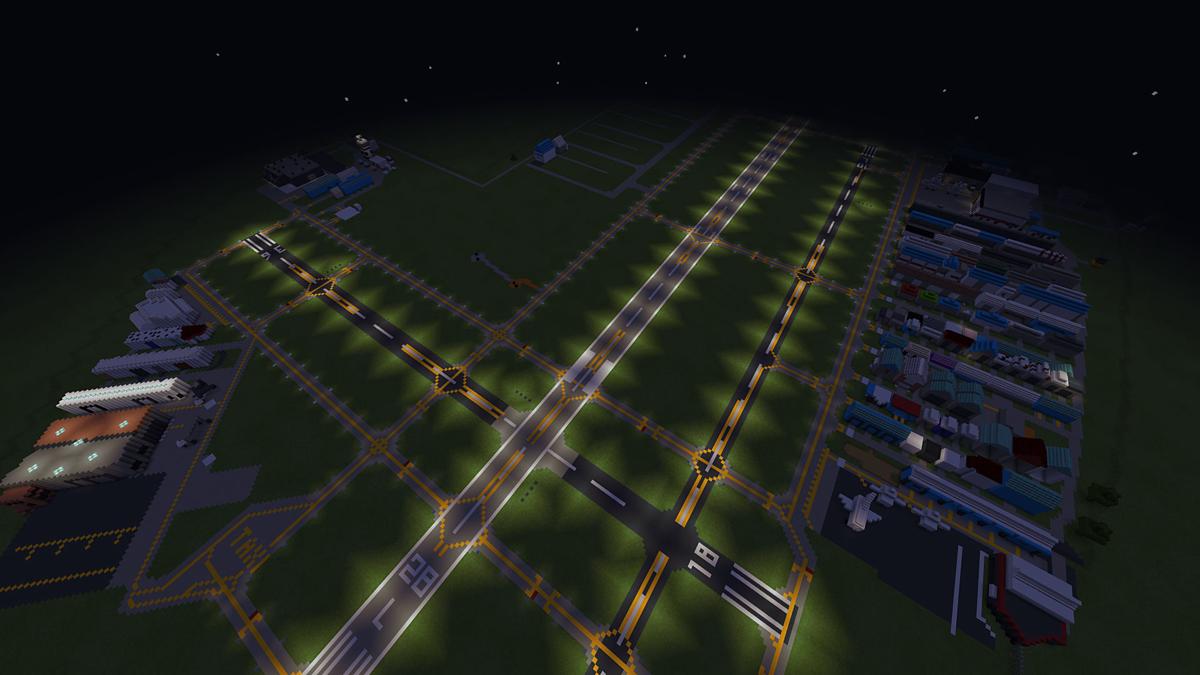 A nighttime view of a Flying Cloud Airport model created in Minecraft by team Firehawks.

A daytime view of a Flying Cloud Airport model created in Minecraft. The model was made by a team of five Dakota County elementary school students who won first place in the FAA’s new Aviation and Space Education Airport Design Challenge.

A nighttime view of a Flying Cloud Airport model created in Minecraft by team Firehawks.

Burnsville’s Kevin Morris was immediately interested when he heard about a new online design challenge for students that asked them to build airports in the Minecraft video game.

Morris, who has worked in the aviation industry for over a decade, said he believed the challenge would be a good fit for his son, Zach, a student at Oak Hills Elementary in Lakeville.

He asked his son if any of his friends also had Minecraft. Zach picked four other students he played hockey with – Nico Francis and Jayden Ivey of Highland Elementary School in Apple Valley, and Trevor O’Loughlin and Ethan Wade of Greenleaf Elementary in Apple Valley.

The Firehawks team was born and recently went on to win top honors in the Federal Aviation Administration’s first Aviation and Space Education Airport Design Challenge. Participants were tasked with creating a model airport from the ground up in Minecraft.

The Firehawks garnered first place in the K-6 age group for nonprimary airports by replicating Flying Cloud Airport in Eden Prairie in Minecraft. The team and other finalists in all categories learned how they finished during a virtual awards ceremony livestreamed on the FAA’s YouTube channel July 2.

“When they announced that we won, I was so happy for the boys. They worked so hard on this project,” Kevin Morris, the team’s parent lead, said.

“I am excited for the future in seeing what you will construct or what careers in aviation you will choose based on this competition,” he said. “You all have taught me to view Minecraft in a much different way, a more practical way. Thank you very much for that.”

Greenleaf Elementary Principal Michelle deKam Palmieri said the students’ creativity and problem-solving abilities came through on their design. Educators know the importance of providing STEM-related opportunities to all students and helping them think more deeply about design, construction and thinking creatively, she added.

“The most important part, however, was your perseverance to keep going on this project,” she said to the students during the award ceremony.

The idea behind the airport design challenge started as a casual conversation between FAA program analysts Blair Hess and Chuck Tackett in March. Many of the FAA’s in-person educational outreach activities were being canceled because of the COVID-19 pandemic and Hess remarked that he should just design a Minecraft game instead, according to Tackett.

Hess said it was an idea he’d had in the back of his mind because of an experience he had with Minecraft with his children.

“I’ve seen them build things that are incredible. When I brought it up, it was a joke. At the same time, there was some validity to it,” he said. “Fortunately Chuck got ahold of the idea. He encouraged me to research what it would take. We spent about three days drafting out proposals.”

The design challenge idea progressed quickly and they and other FAA staff came up with a workable product within two weeks, Tackett said.

The FAA initially intended to start the challenge as a pilot project for the southwestern United States. The agency planned to contact educators it had relationships with, said Rob Lowe, regional administrator for the FAA southwest region.

Lowe said the challenge was not widely advertised by the agency, but word still spread to different states and some countries.

In the end, over 800 students and about 355 teams from 43 states, Washington, D.C., Puerto Rico, Germany, England and India enrolled. Over 120 teams finished the challenge and most came close to completing it. Collectively the students poured over 5,000 hours of work into the project, according to the FAA. Minnesota had nine teams including the Firehawks, seven from a high school in White Bear Lake and one from a St. Paul school.

“When we first came up with the idea for the airport design challenge, Blair and I thought that we were creating a local activity to help us reach out to the southwest region students,” Tackett said. “During the COVID crisis we didn’t think this was going to become an international event that it turned out to be.”

The design challenge ran over a six-week period from late April through early June. The first five weeks involved the FAA providing different lessons each week about different facets of airports. Students learned about paved surfaces, perimeter security, lighting, signs, markings, buildings and more. The last week was used by teams to finish their projects.

Lowe said one of the primary drivers for the agency to be involved with STEM and space education and outreach is a shortage of workers across the aging industry. It’s an aging workforce that’s well-seasoned, and there are a lot of opportunities in the future.

“There is a huge revolution going on in the aviation industry,” he said.

The student projects were reviewed by independent judges with different backgrounds and expertise within the FAA, including pilots, airport planning and air traffic controllers. The designs were judged on criteria such as technical accuracy, creativity and innovation, Hess said.

Hess said the judges scored the projects on a rubric provided by the FAA and the sum of judge scores became a team’s final score.

Morris said teams were encouraged to build an airport in their state. He suggested to his team that it build Flying Cloud Airport because he believed it would be more challenging than a larger airport like Minneapolis-St. Paul International Airport because of the number of buildings and runways it has.

“MSP is a big airport but in terms of actual buildings and little taxiways, I think Flying Cloud is a much more engaging airport,” he said.

The team met about four times a week through Zoom for an hour. Morris estimates the team spent about 25 hours to complete the Minecraft model.

“They always wanted to work. They were ready go to every time. I had some kids logging into Zoom a half an hour ahead of time,” Morris said. “They just couldn’t wait to get started on the project. I think the kids really enjoyed it.”

Morris said the team had to solve problems such as how to add blue runway lights. Minecraft doesn’t have blue lights, so one of the team members came up with the idea to dig holes in the ground, put torches in the holes and cap them off with blue glass, he added.

The boys did not get to watch the virtual award ceremony together, but they did gather for a small celebration in the days after, Morris said. He hopes to be able to take the team on a tour of Flying Cloud Airport when the pandemic eases.

When asked if the FAA would do another similar challenge, Lowe said the agency will take lessons it learned from the pilot program and review it at a wider organizational level. Those decisions could tentatively be made at the end of the year.