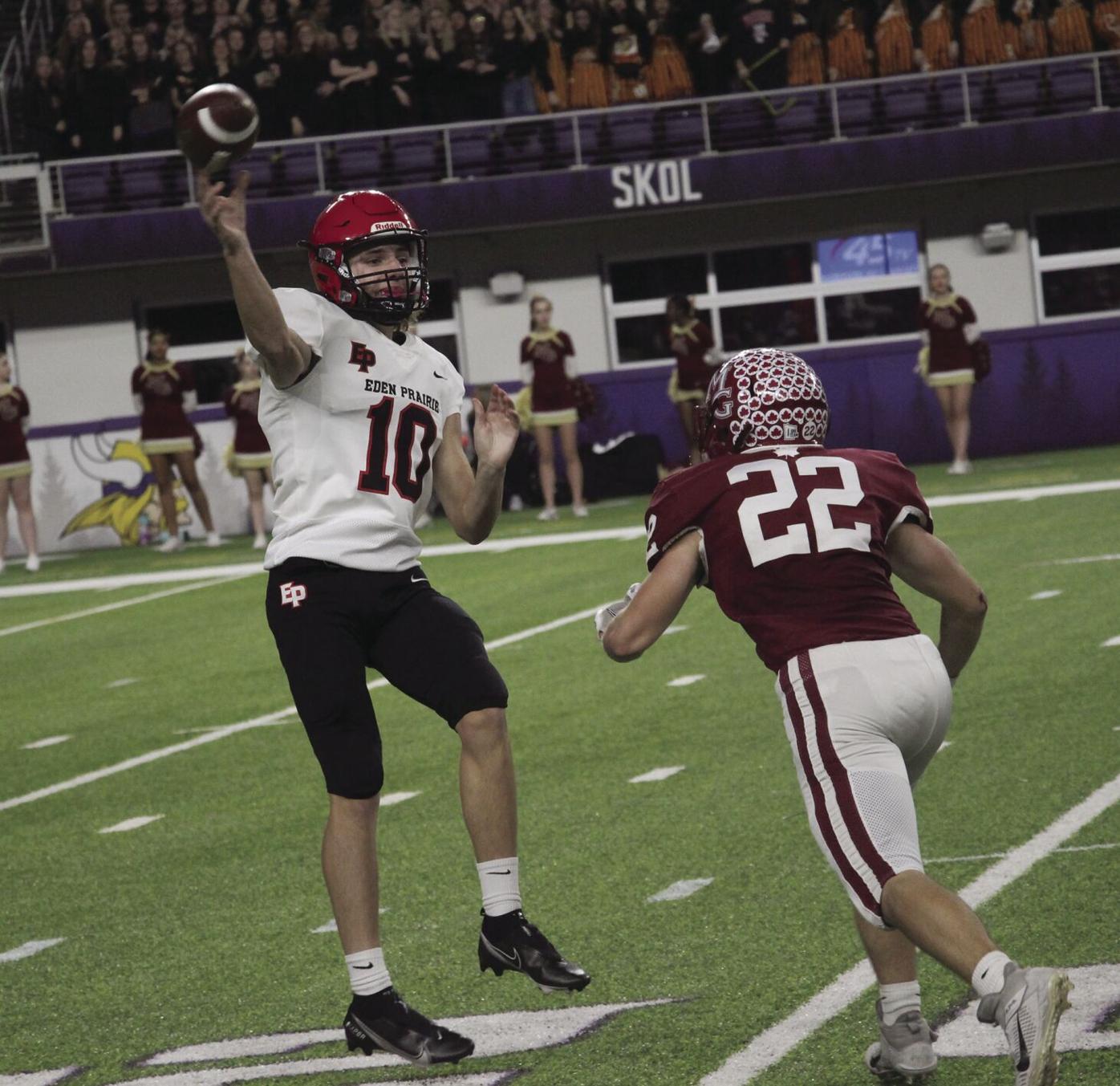 Eden Prairie junior quarterback Nick Fazi evades the rush and throws against Maple Grove in the Class 6A football semifinals at U.S. Bank Stadium on Nov. 18. 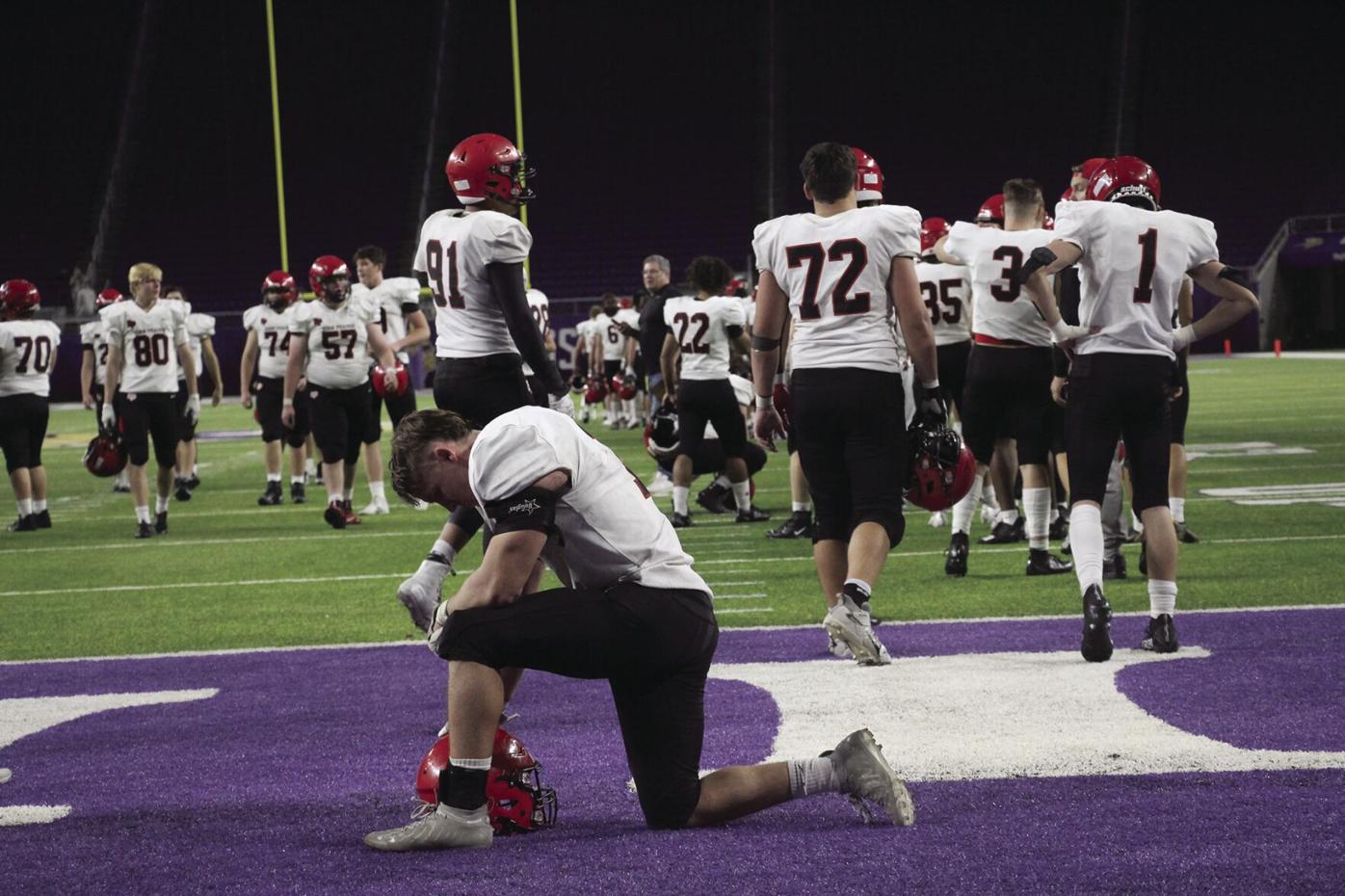 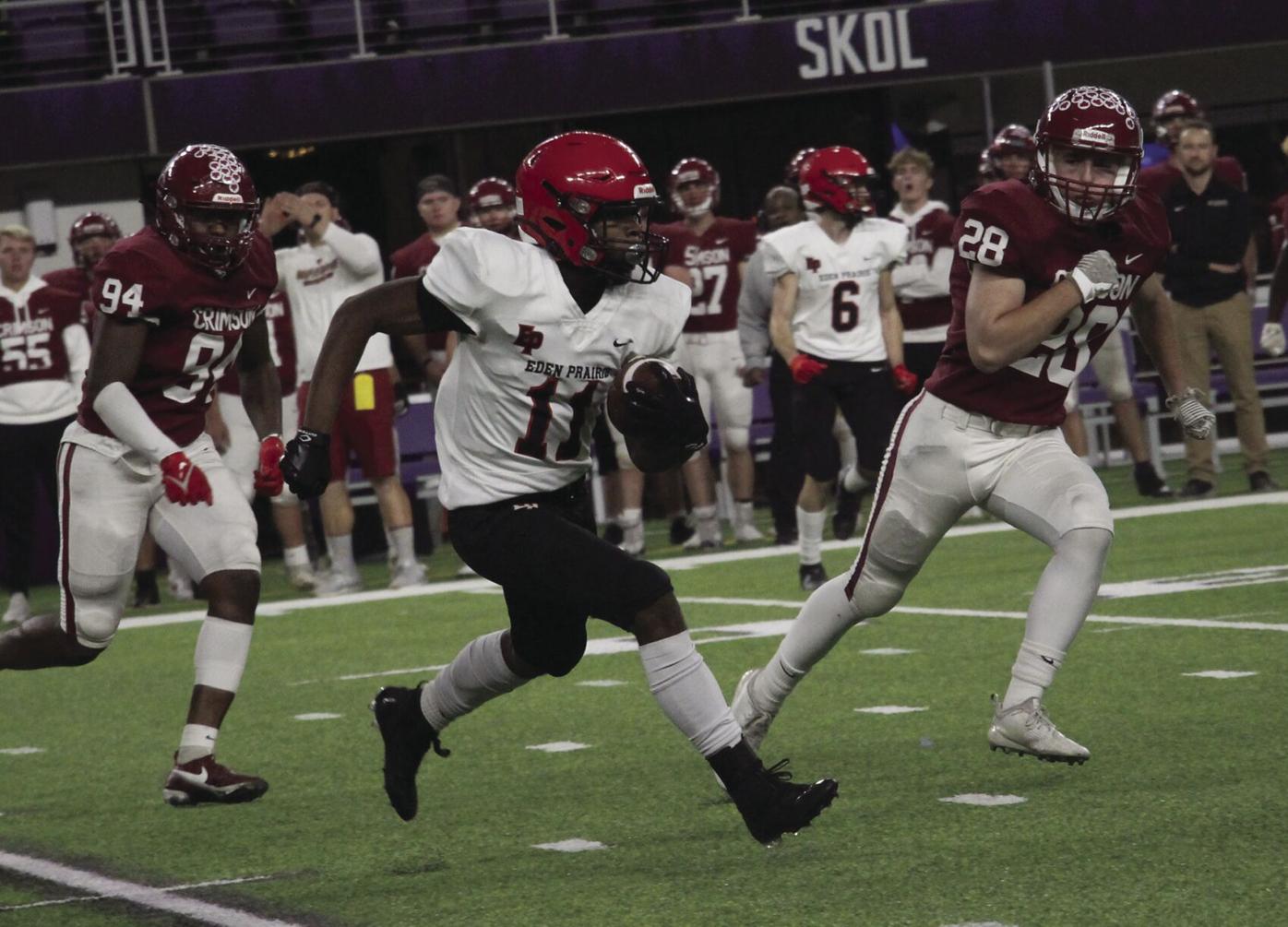 Eden Prairie junior quarterback Nick Fazi evades the rush and throws against Maple Grove in the Class 6A football semifinals at U.S. Bank Stadium on Nov. 18.

In a role reversal of past battles between Maple Grove and Eden Prairie, the Crimson beat the Eagles 35-3 in the Class 6A football state semifinals Nov. 18 at U.S. Bank Stadium.

After going back and forth in the early stages of the first quarter with no points, Maple Grove junior quarterback Jacob Kilzer and the Crimson faced a third down and short at their 20-yard line. Kilzer, on a quarterback sneak, lost the ball and it was recovered by Eden Prairie – their second turnover of the first quarter. But once again, Maple Grove’s defense held firm, holding them to only a field goal and a 3-0 lead.

Everything changed in the second quarter. On the Crimson’s first possession of the quarter, Kilzer redeemed himself by finding junior wide receiver Jacob Anderson for a 33-yard touchdown, giving Maple Grove a 7-3 lead. On the ensuing Eagles drive, Crimson junior defensive back Jackson Powers high-pointed an end-zone fade pass from junior quarterback Nick Fazi and intercepted the ball, slamming the door shut on another Eagles scoring opportunity.

Without giving the crowd a chance to breathe, Maple Grove senior running back and Mr. Football finalist Derrick Jameson took the next play, a pitch, and ran 77 yards down the sidelines for a thunderous touchdown. Suddenly it was 14-3 Crimson. Maple Grove’s student section chanted “Mr. Football” as Jameson ran back to the bench.

Eden Prairie’s next drive saw more disaster, as Anderson recovered a fumble on defense and took it to the house, giving Maple Grove a 21-3 lead, which was the halftime score.

After the 15 minute intermission, coach Mike Grant’s Eagles came out of the tunnel, looking to play one drive at a time to try to chip away at the Crimson lead. However, the opposite happened. Maple Grove senior defensive end Kiers Brevik scooped up another Eagles fumble and returned it for a touchdown. Now it was 28-3 Crimson, and hope started to fade away from the Eagles sideline. Maple Grove’s defense, which has been the backbone to a 10-1 season up to that point, looked every bit the part against the banged-up Eagles. “You win with defense,” Maple Grove head coach Matt Lombardi said. “I love the fact we’re scoring points, but if the defense attacks, that takes the heart out of people. That is what we did today. We gave Eden Prairie a lot of chances in the first quarter to get rolling, but our defense said, ‘Nope, you’re not going to have that.’ That gave our offense a chance.”

Eden Prairie wouldn’t manage to score another point and a late Jameson 4-yard score put the icing on a dominant 35-3 win.

“In the end, you got to avoid injuries,” Eden Prairie head coach Mike Grant said. “We probably had six kids out. We lost our starting fullback during the game, our tailback Takhi [Vaughn] tried to play but couldn’t play. All year we battled these injuries and played great teams. We’ve been able to manage, but tonight we didn’t have enough against a really good Maple Grove team.”

Even though the score looked lopsided when the clock ran out, Grant thought his team played better than the numbers indicated. “I thought our defense played really well tonight,” he said. “I know it looks ridiculous. I thought they played hard and for the most part kept [Jameson] in check except for a couple of runs. I was really proud of our kids.”

Emotions run high at this point in the season, and with the reality of their season coming to an end, the Eagles wore it honestly on their faces.“The kids aren’t crying because they lost. They’re crying because it’s the last game together,” Grant said. “We tell our kids they get 10 minutes to be upset and that’s it. We tell them if this is the worst thing that happens in your life, it’s a great life. What a great year, what great kids. We’re going to miss all these seniors.”

But Grant also gave warning to those who think Eden Prairie is going into long-term hibernation. “Once every 15 years there’s an insect that comes out,” Grant joked. “They rise up this time. But we’ll be back.”