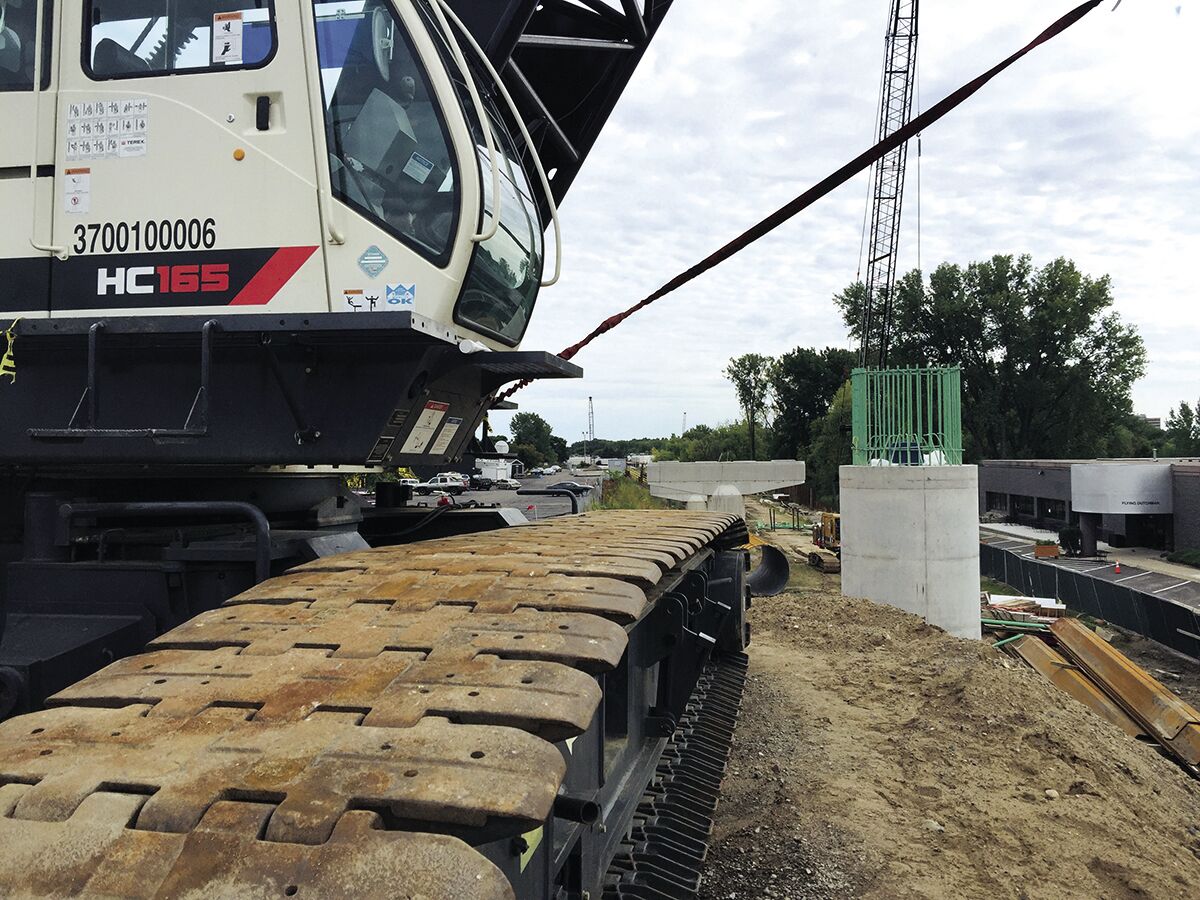 Work on the Southwest Light Rail Transit line is expected to continue. However, poor soils on the northern side of the project will require more “robust” construction techniques, resulting in potential delay in the completion of the project. (Sun photo by Ramond T. Rivard) 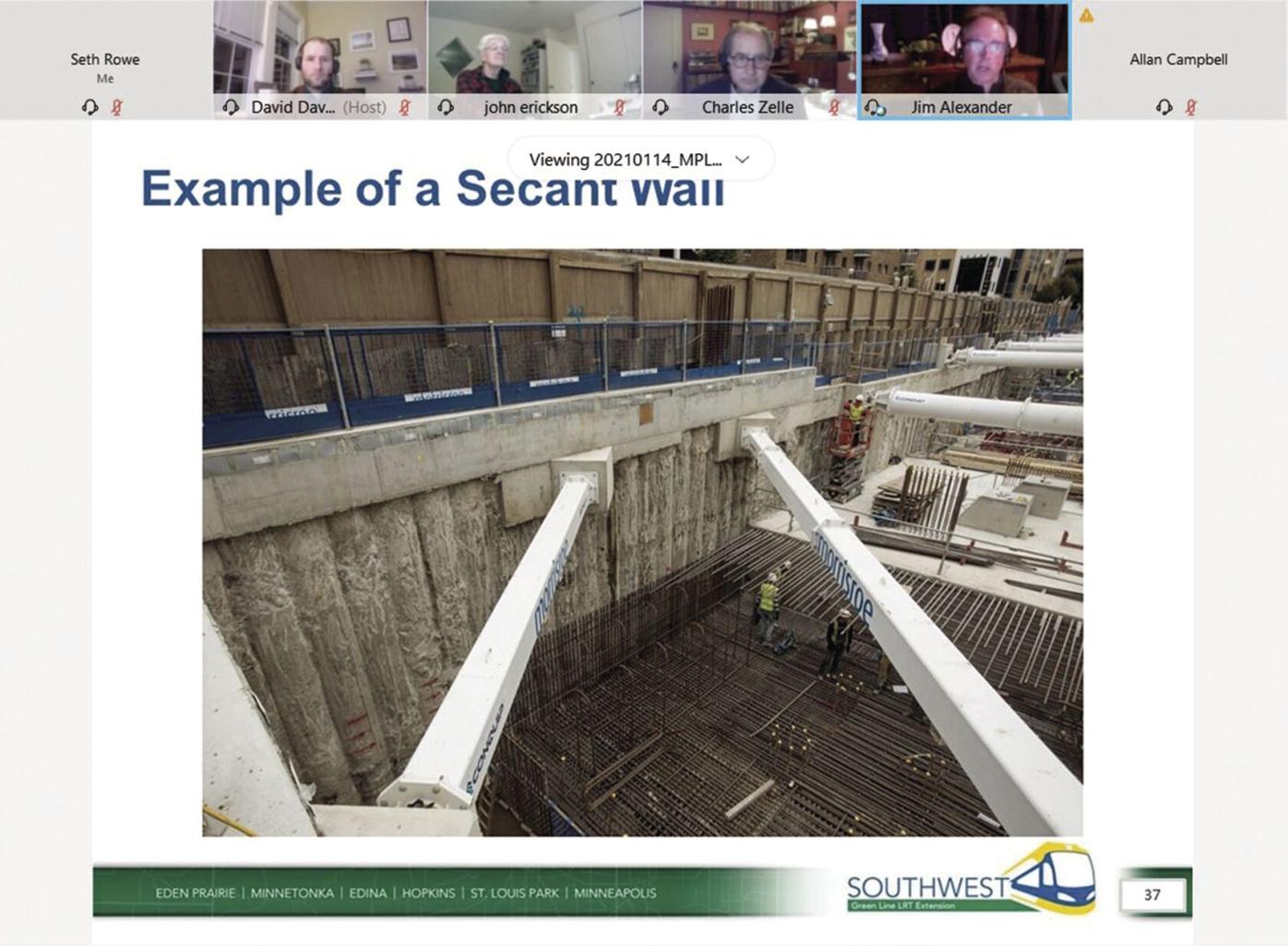 Metropolitan Council Chair Charles Zelle and project director Jim Alexander explain how a secant wall technique works during a Jan. 14 virtual meeting about delays for the Southwest Light Rail Transit line. Due to soil problems in Minneapolis, officials said the line likely will not open on schedule in 2023. (Screen capture) 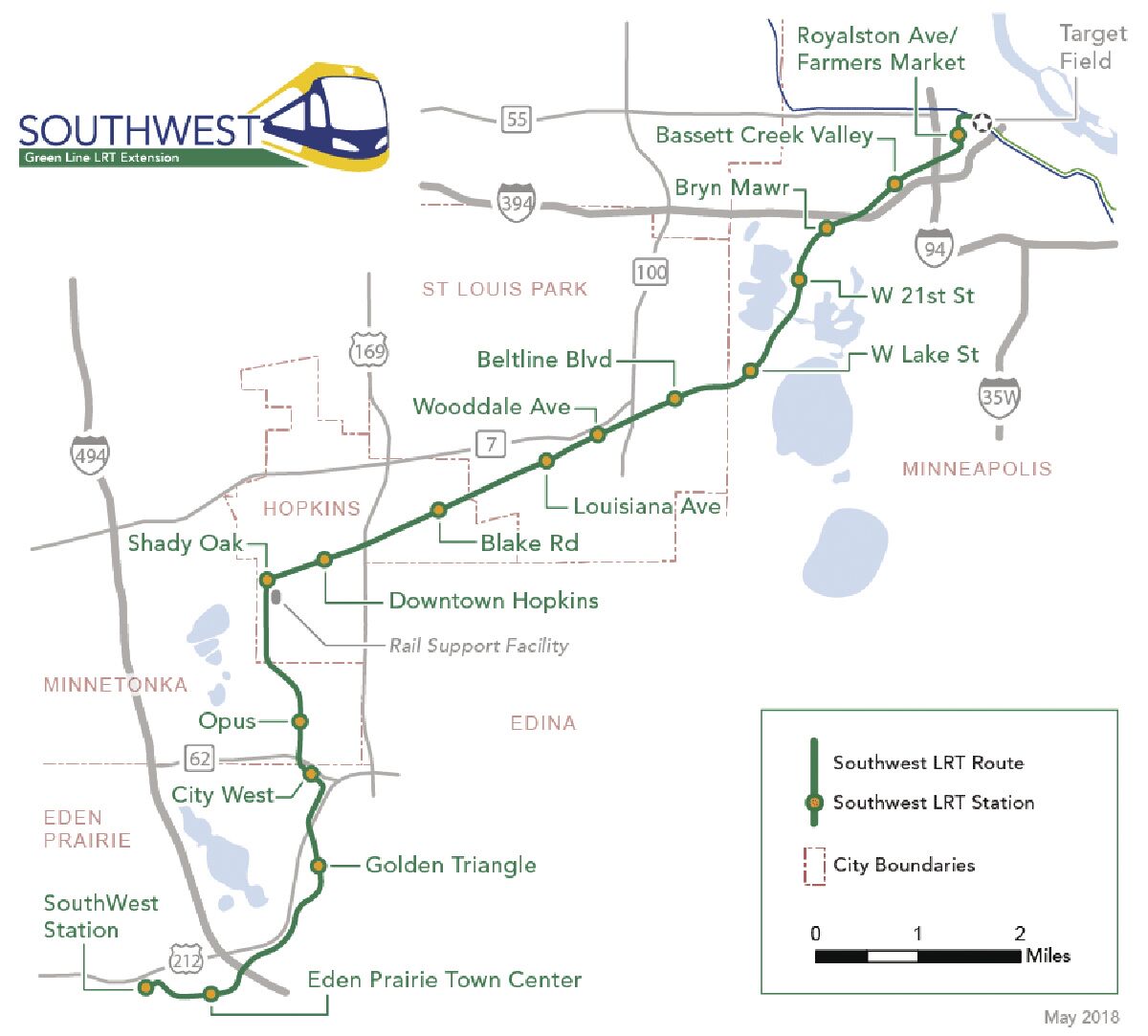 Work on the Southwest Light Rail Transit line is expected to continue. However, poor soils on the northern side of the project will require more “robust” construction techniques, resulting in potential delay in the completion of the project. (Sun photo by Ramond T. Rivard)

Metropolitan Council Chair Charles Zelle and project director Jim Alexander explain how a secant wall technique works during a Jan. 14 virtual meeting about delays for the Southwest Light Rail Transit line. Due to soil problems in Minneapolis, officials said the line likely will not open on schedule in 2023. (Screen capture)

Setbacks in building a tunnel and a wall in Minneapolis mean that the Southwest Light Rail Transit line likely will not open on time.

A Jan. 14 Metropolitan Council announcement blamed poor soils for the problems with building a light rail train tunnel in the relatively narrow Kenilworth Corridor of Minneapolis.

The Met Council had planned to use interlocking steel sheeting but will switch to a more robust system called a secant wall to ensure soil near the tunnel remains stable. Roy described the planned underground wall as resembling small concrete silos that interlock to form a type of retaining wall and then are buried to keep the soil in place.

“The soil was settling,” Roy said. “With the proximity to structures in the area, the secant wall was the safest option.”

During a Jan. 14 virtual meeting with politicians representing Minneapolis and their constituents, project director Jim Alexander said workers observed ground movement near the tunnel site and encountered boulders a foot wide or larger. Railroad debris also impacted the ability of contractors to drive steel sheets into the ground, causing delays.

“We said we’re going to have to take a look at a different system,” Alexander said.

With the secant wall method, Alexander said, “That provides a good seal and very good structural walls that allow us to build the tunnel in that area.”

In response to a question from Rep. Frank Hornstein (DFL-Minneapolis), Alexander said some settling has occurred along the Twin Cities & Western Railroad in the corridor.

“But we’re out there to fix that right away because trains have to keep on running,” Alexander said.

The problems arose during the 2020 construction season, but the Met Council held off on making a public announcement while discussions on how to address the problem progressed, according to Roy. The regional government still can’t set a revised opening date since leaders still are exploring how changing the sequence of work on the project could help the timeline.

“In a perfect world we might be right on, but it’s not looking that way right now,” Roy said of the previous plan to open in 2023.

“While this element is not a surprise, we have now completed analysis and design for the wall and have a fuller understanding of the challenges of constructing this project element in an active freight rail corridor,” the Met Council’s statement says. “These are no small changes and require thoughtful and deliberate engineering, design plans and construction methods.”

Met Council Chair Charlie Zelle pointed out the size of the $2 billion project and the complications of building a line with tunnels, bridges, wetlands and accompanying freight rail.

“I would kind of describe it as being two U.S. Bank stadiums built in a narrow corridor over 14-and-a-half miles,” Zelle said. “When you think about light rail projects around the country, this is as complicated as they get.”

He added, “No big surprise is that these projects of this scale come with risk, and unforeseen issues arise.”

In consideration of nearby condominiums, including a large tower close to the tunnel, Zelle said, “We’re redesigning a way to make sure that we are taking every measure of caution, that we do it right. That will take more time and more money, but it’s too important for a project that’s going to last generations.”

The corridor protection wall dividing BNSF freight trains and light rail trains is not new but had not been included in the original contract, he noted.

“That’s a big project by itself,” Zelle said.

Contractors will have to drill 600 shafts to support the wall, which BNSF required as a condition of building on the railway’s property, Alexander said.

“The wall is very stout, very structurally secure to withstand any freight rail or LRT derailment through this area,” Alexander said.

Minneapolis Councilmember Lisa Goodman suggested that Gov. Tim Walz renegotiate the need for the wall with BNSF, but Zelle said the railway had already been reluctant to accept light rail in the corridor and had insisted upon the wall.

Zelle acknowledged that he has heard from nearby residents who noticed that the light rail project had fallen behind schedule.

“You’re right,” he said. “I think we’ve got to take a hard look and look at ways now that we could resequence the project and look for efficiencies and ways that we can manage those two elements but also kind of keep the project going.”

Of the impact on people living near the line, Zelle added, “Spoiler alert: it’s going to be disruptive. We’re going to have more of that.”

Roy also reached out to the communities impacted by the project.

“Thanks to the communities for bearing with us on this. I know construction can be a real pain, but we want to make sure we get it right for the long run. We’re going to be neighbors for a long, long time. This is something that’s disappointing, but not entirely unexpected. We’ll get this secant wall constructed and people will have a world-class light rail system.”

The project is about 35% complete, Alexander noted. In an example of progress that has been made, he pointed to new bridges that are noticeably visible in Eden Prairie. Additionally, nearly 95% of utility work is complete along the line.

Despite the setback in Minneapolis, Roy said work would continue elsewhere along the line.

He said, “2021 is going to be another gangbusters construction season. In Eden Prairie, Minnetonka, Hopkins and St. Louis Park, work is going to continue at a significant pace.”