The group of Hopkins Elks Club and Hopkins Women’s Club members who packed bags of toiletries and other items May 22. The bags are delivered to partner organizations that distribute them to homeless teens. (Submitted photo) 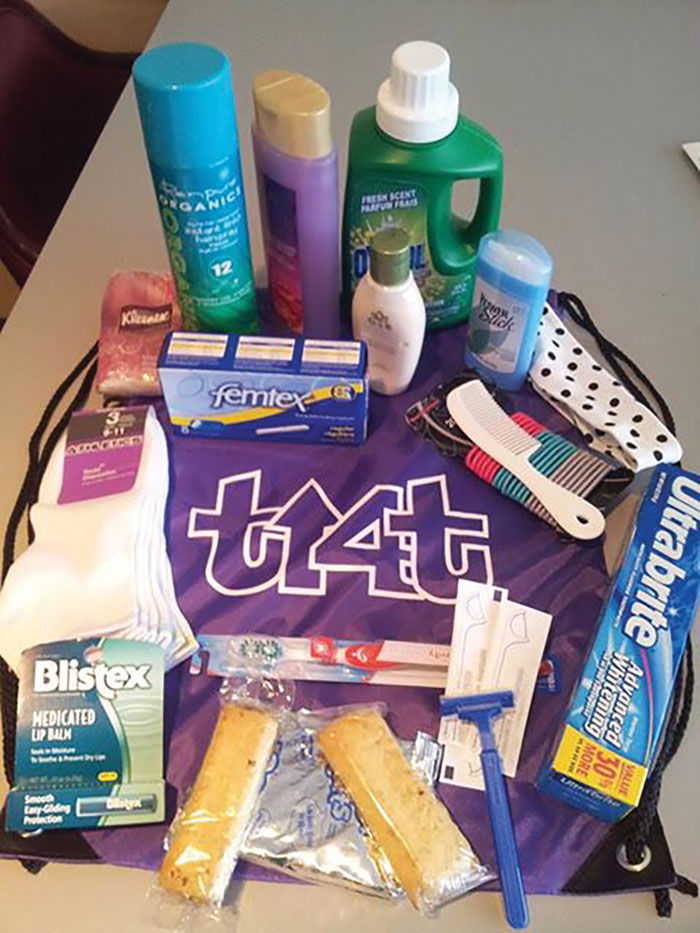 The items included in a Teaming Up for Teens bag include toiletries, laundry soap and snacks. These items were packed May 22 by the Hopkins Elks and Women’s Club. The group packed 180 bags and another 90 summer fun packs to be delivered to elementary and junior high schools. 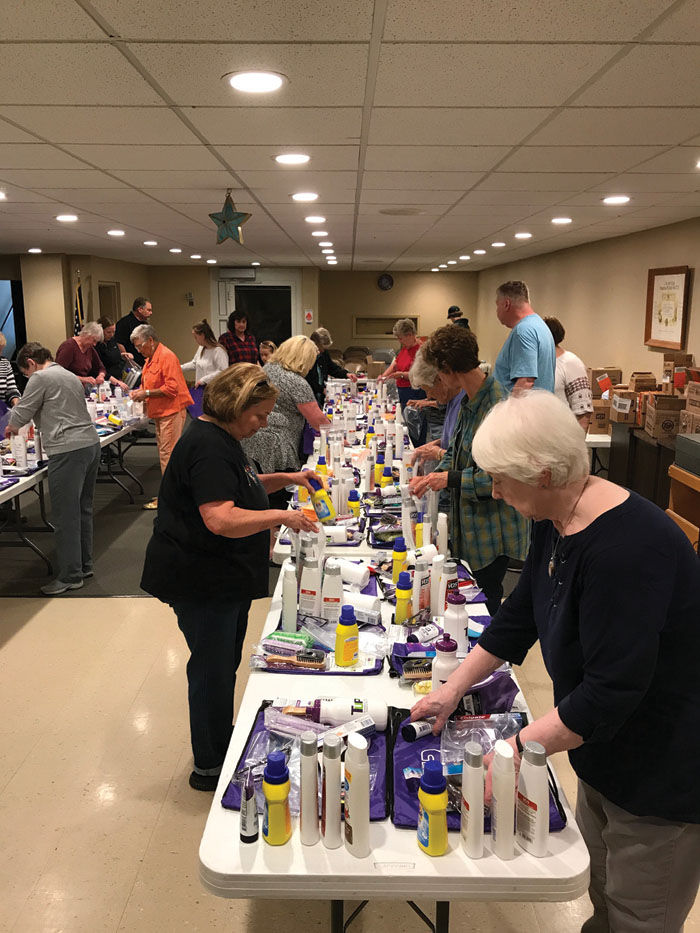 Teaming Up for Teens volunteers form and assembly line to pack bags of toiletries and other items. Depending on how many volunteers are helping, the work to create 180 bags can take as little as 30 minutes.

The group of Hopkins Elks Club and Hopkins Women’s Club members who packed bags of toiletries and other items May 22. The bags are delivered to partner organizations that distribute them to homeless teens. (Submitted photo)

The items included in a Teaming Up for Teens bag include toiletries, laundry soap and snacks. These items were packed May 22 by the Hopkins Elks and Women’s Club. The group packed 180 bags and another 90 summer fun packs to be delivered to elementary and junior high schools.

Teaming Up for Teens volunteers form and assembly line to pack bags of toiletries and other items. Depending on how many volunteers are helping, the work to create 180 bags can take as little as 30 minutes.

It’s tough to be a teenager, even at the best of times. But for homeless teens the ordinary trials of adolescence become much more complicated, particularly for youth in the suburbs, where homelessness is often an invisible, but devastating, problem.

For the past five years, members and friends of the Hopkins Elks Club have reached out to provide much-needed hygiene items, such as laundry detergent, deodorant, toothpaste and other toiletries to teens in need, no questions asked, through the Teaming Up for Teens project.

The program was started by executive director Dedria “DeDe” Noll, about 15 years ago when she began packing supplies for homeless teens in the basement of her St. Louis Park home.

She began preparing the care packages after reading an article in the Sun Sailor about the struggle of homeless teens in the suburbs, where homelessness is often kept secret in an effort to fit in with peers. During winter, spring and summer school breaks, these youth often miss meals and don’t have access to basic resources.

“People think, ‘It’s the suburbs, we don’t have homelessness here,’” Noll said. “We do a lot of raising awareness.”

While many organizations exist to help teens with emergency housing, meals and clothing, the simple items crucial to daily life like soap, hair products, and feminine hygiene supplies, are often hard to find outside of Minneapolis.

Noll stepped in to fill the gap, distributing the packages as-needed to local resource centers, in the hopes of getting them into the hands of youth in need.

Today, Teaming Up for Teens partners with more than half a dozen organizations across the west metro to deliver 120 to 180 care packages each month to youth from St. Louis Park to Chaska and every community in between.

Noll joined the Hopkins Elks Club 10 years ago on the advice of a friend and fellow member, bringing her care package project with her. With the help of the Elks, the project began to grow. In 2012, Noll applied for an impact grant through the Elks National Foundation, in the hopes of taking the project even further.

“We poured our hearts into it, thought of all the things we wanted to do,” Noll said. “The goal was to make this available to kids all over the suburbs as something they could count on.”

That first year, the Hopkins Elks received a $10,000 grant, and Teaming Up for Teens was born.

Noll said the name references just how many people it takes to provide support for homeless youth.

“We wanted to call it a team because it’s a big group effort. We have a lot of partnerships with groups that have already earned the trust of homeless teens because that’s the best way to help them,” Noll said.

The nonprofit is in its fifth year of receiving the grant.

In addition to items such as compact mirrors, shampoo and soap, shaving razors, deodorant and dental supplies, the care packages also include seasonal items, such as sunscreen in summer months and warm mittens and hats in the winter.

“They’re just simple little things, but they can have a huge impact,” board member and volunteer Gretchen Peterson. “It helps make teenagers feel like they’re able to take care of themselves.”

A lot of the items, such as tampons, can’t be purchased with food stamps or other forms of aid, Noll added.

“The last thing we want is a teenager trying to take a test and having to worry about getting her period with no supplies,” she said. “These kids are already having to make incredibly difficult choices, like ‘Do I eat today or do I wash my clothes.’”

Noll said that hygiene supplies can also help teens keep a roof over their heads.

“I’ve heard from a lot of teens that the couches don’t dry up as fast if you’re able to provide your own toiletries,” she said. “People are more willing to let these kids sleep on their couch if they have their own laundry supplies, shampoo, etc.”

Each bag also includes a one-page guide to other resources in the community, a mini-directory of help available in St. Louis Park, Minnetonka, Hopkins and other communities.

This year, the Elks are also working on a special “summer fun” kit with art supplies, notebooks, toys and water balloons.

“We like to do special projects anytime we can,” Noll said.

Supplies are collected either through donations or purchased in bulk, and volunteers gather about once a month to package the supplies into individual kits, complete with a custom Teaming up for Teens bag. The group’s logo is designed to be discrete, with the letter T, an up arrow, the number four and another T labeling each bag.

“The teens recognize it, but no one else does, so it helps maintain some of their privacy,” Noll said.

Once the items are bagged, they’re distributed by volunteers to other organizations like ResourceWest, Tree House and MoveFwd, where teens can take what they need.

“When I started this, I didn’t want to reinvent the wheel. I just got everyone together to start talking and working together,” Noll said. “We’ve built up a lot of trust in the community and our job is to help fill the needs that are out there.”

Young people can end up homeless for a variety of reasons; homelessness can happen at any age, even as early as elementary school, prompting the Elks to start providing supplies specifically for students in fifth grade and younger.

“A lot of times, the whole family can end up homeless, so we’ve expanded to offering help in elementary schools as well. That’s one of our biggest needs,” Noll said.

Teaming Up for Teens also hopes to raise awareness of issues surrounding homelessness and dispel misconceptions, such as that teens are in some way responsible for their situation.

“People tend to think it’s the teenager’s fault, that they’re being rebellious but that’s usually not the case,” Peterson said.

“The good thing that comes out of it is that the bagging events bring the community together — Boy Scout troops, families, parents and kids,” she said. “It opens up a lot of great conversations.”

Community organizations, such as the Women’s Club, or various community churches, will often bring groups of volunteers. A typically event has 15 to 25 volunteers; it can take as little as half an hour to organize 180 care packages, depending on the number of people helping.

Often, the teenagers that have previously received care packages will volunteer, either at a bagging event or for another charitable project, such as helping the elderly or providing food assistance.

“A lot of these teens, they want to pay it forward. They’re really thinking beyond themselves, and we’re giving them a chance to get out into the wider world,” Noll said.

This just goes to show the impact of a little community kindness on the next generation of suburbanites: by bringing the community together, Teaming Up for Teens aims to make youth feel like they have a home and a family in the community where they live, even if they don’t have a house to call their own.

“They’re good kids, resourceful kids, that just want to graduate high school, like any other teen. Providing these care packages, it might seem like a small thing, but to them it’s a big deal,” Peterson said.