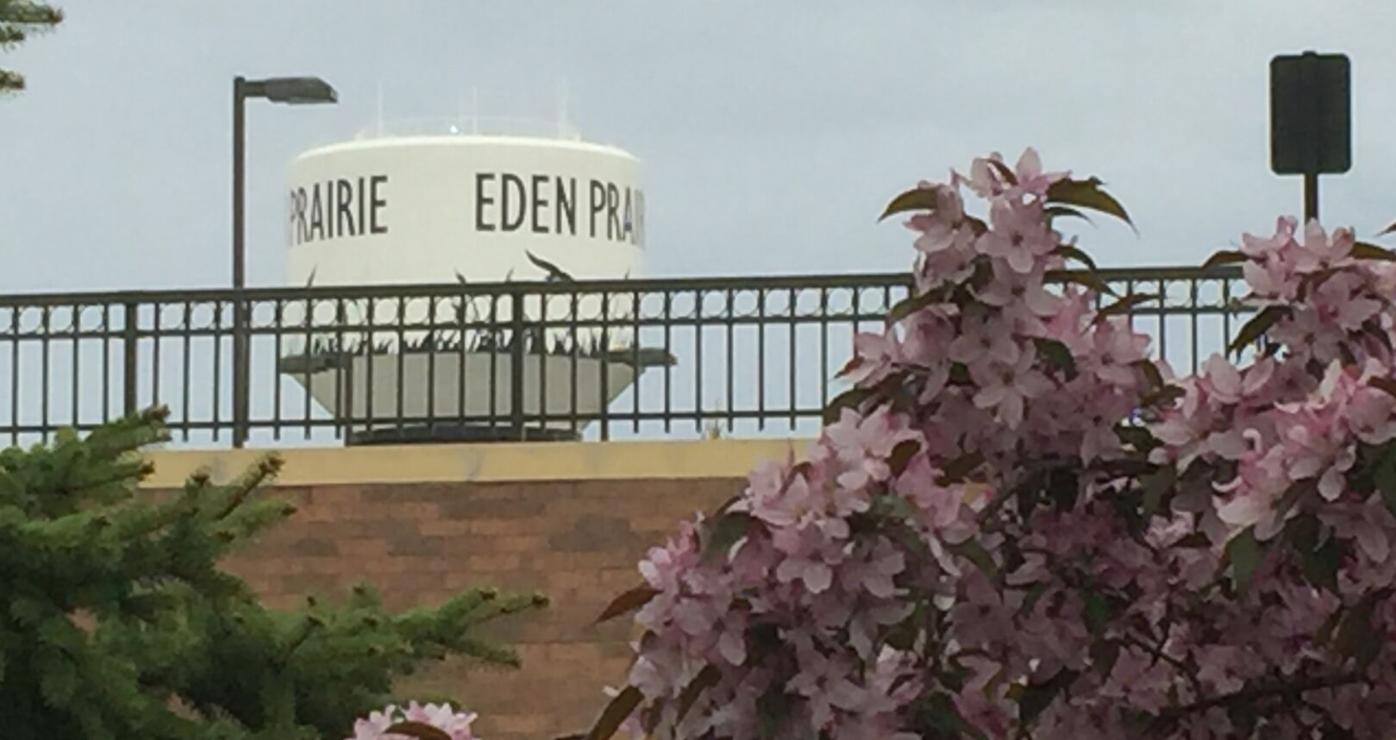 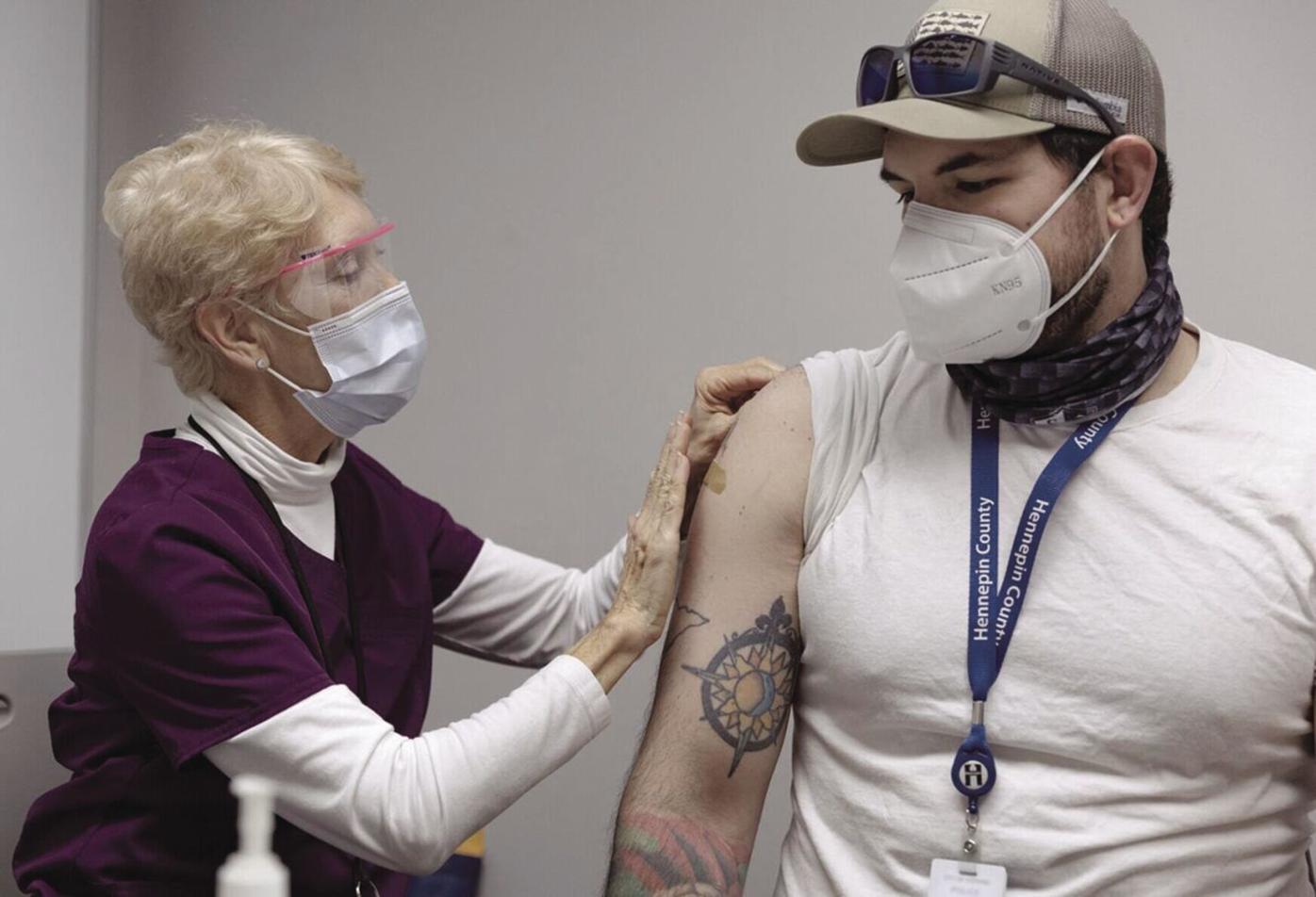 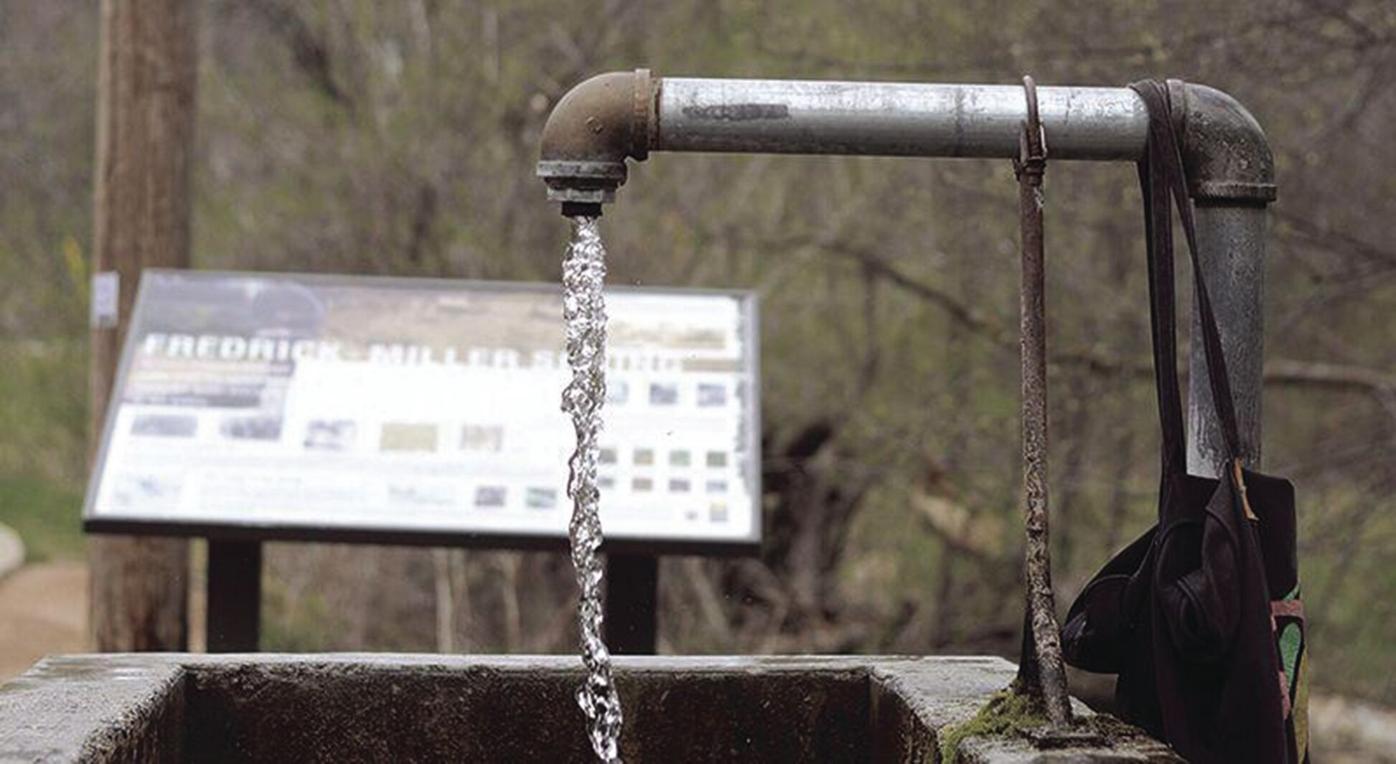 Water constantly runs from a spigot at Fredrick-Miller Spring, ready for waiting jugs. The spring has been in use since 1890, city staff noted in planning documents. 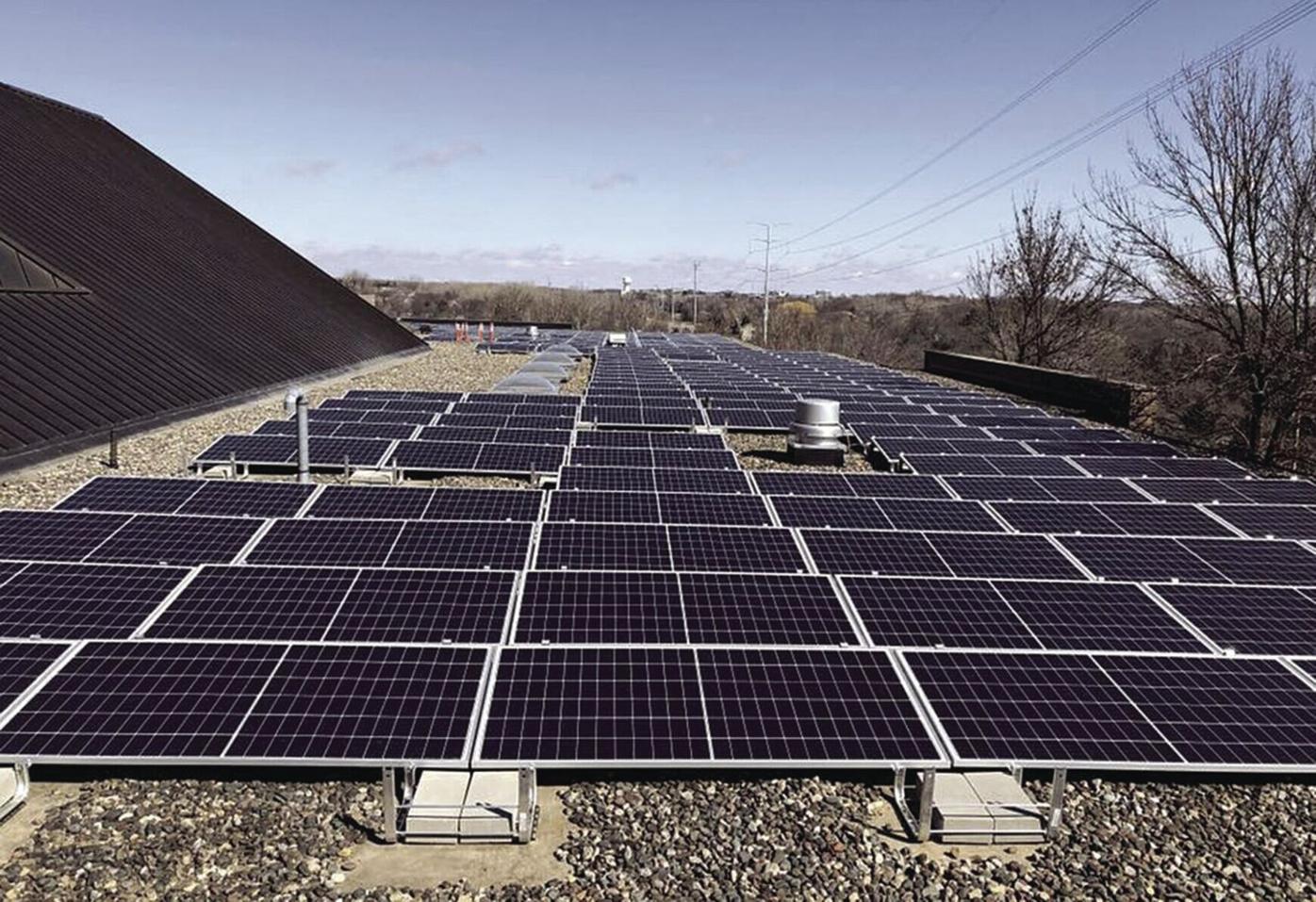 Eden Prairie residents will have an opportunity to subscribe to a community solar garden that will be constructed on the roof of the city’s Community Center.

The roller coaster of a year that was 2021 has been filled with plenty of ups and downs, including signs of hope, some despair, and a lot of uncertainty.

The community of Eden Prairie and beyond was filled with hope during the first part of the year – hope that came in the form of COVID-19 vaccines and the reduction of cases across the state and the nation; then came the variants – Delta and Omicron – that once again prompted masking, testing and a focus on personal health as the year drew to a close.

In Eden Prairie, there have been other news stories and issues that have further complicated life beyond – but sometimes connected to – COVID. Over the past 12 months, there were two resignations from the School Board, the city continues to navigate a number of development issues, and the light-rail construction was slowed because of issues near Minneapolis.

Here, we take a peek at some of the stories from the past year that have drawn particular interest from readers.

As the COVID-19 vaccines became available during the early part of 2021, the city of Eden Prairie surveyed residents on their feelings toward being vaccinated and how they planned to personally address COVID.

“This survey was generated by our vendor to help us gain insights into resident opinions and feelings about COVID-19 vaccinations,” said Katie Bengston, Eden Prairie’s senior communications coordinator.

In all, about 2,400 residents participated in the survey that showed 75% saying they would receive a dose as soon as it was available. The survey results were issued in a report reviewed by the City Council in late January.

Mayor Ron Case said at the time of the report, “I’m optimistic that everyone will enthusiastically want to be vaccinated. Hopefully, the flood of information coming at us daily from federal, state, and county sources, not to mention news organizations and social media, will convince people that it is in their best interests and the interests of society as a whole to get people vaccinated.”

Some of the reasons that respondents gave for not planning to get vaccinated:

• 313 were concerned about the side effects.

• 230 said they wanted to see what would happen to others.

• 55 had already tested positive, so they didn’t think they needed the vaccine.

• 30 felt the process had been rushed.

• 20 were concerned whether the vaccine was effective.

• 21 said they would receive the doses if an employer recommended it.

• 61 said they would get vaccinated if the employer required it.

A special Eden Prairie School Board election was held in November to fill a seat that was vacated by Veronica Stoltz last May. However, because Beth Fletcher also resigned from the board last summer, the election was utilized to fill both vacant positions.

The board decided to hold the special election to fill Stoltz’s seat, but agreed following Fletcher’s resignation to fill the additional open seat by appointing the candidate with the second-most votes in the November election.

Following Stoltz’s resignation, the board debated how to fill the vacancy. An attempt to appoint Francesca Pagan-Umar to the position at the time failed on a 5-2 vote after much discussion.

A petition signed by more than 500 in favor of Pagan-Umar’s appointment was presented to the School Board. Those presenting that petition expressed concern that some boardmembers had suggested they did not need to follow the state law requiring the board to appoint a member to fill a vacancy.

Later in the meeting, Board Chairperson Adam Seidel acknowledged that the school district’s attorney had indicated the board did need to make an appointment.

There was also discussion about waiting until the November election to allow the electorate to make the decision.

Boardmember C.J. Strehl said, “The principle to me is the voters of Eden Prairie should decide who is going to govern them for the School Board, and they should choose who they like.”

After the motion to appoint Pagan-Umar failed, the board appointed Karla Bratrud to fill Stoltz’s seat until November, and developed plans for the special election.

But those plans were complicated when Fletcher announced her resignation, which she said was driven by a family decision to move to Atlanta.

With a special election already scheduled for November to fill the seat previously held by Stoltz, the board eventually decided to move ahead with that election, but with the twist that the runner-up would be appointed to the other open position.

As it turned out, there were five candidates on the November ballot – Pagan-Umar , Steven Bartz, Albert Born, Michelle Mattison, and Darryl Stanton.

Bartz won the overall count, and Pagan-Umar, who finished with the second-most votes, earned the right to be appointed this month to the board.

The board is planning to conduct another special election in 2022 for the seat to which they appointed Pagan-Umar, because the November 2021 special election was technically only to fill Stoltz’s seat.

Construction of a housing development, the Noble Hill Project, that would include 50 single-family homes on a 27.5-acre site near Fredrick-Miller Spring in Eden Prairie, was approved in May by the City Council, but is yet to begin.

Though the exact reasons for the delay in construction is not clear, there is a pending lawsuit by the Spring Valley Friends that is still in litigation.

Opponents to the development have cited its proximity to the popular spring as a reason to deny the project. They have also argued that soil studies in the area indicate a development like this could eventually lead to significant erosion issues, pollution to Riley Creek, and the loss of endangered bird and bee species.

Pulte Homes presented the project to the city and to the Riley Purgatory Bluff Creek Watershed District, both of which signed off on the project.

However, opponents contend that an environmental review of the property was never properly completed.

The council’s approval of the project came on May 4 when Mayor Ron Case said, “Can I sit here tonight and assure you, absolutely, that this development is not going to harm the spring? Yes, absolutely.”

Sue Bennett, an opponent of the development, said at the time, “We submitted a environmental assessment worksheet (EAW) petition to the environmental quality board for additional environmental study on the Riley Creek area. Today we received approval, but the process is not final yet. The request for an EAW now gets sent to the city of Eden Prairie for approval. This will also help to ensure that the proper steps are taken to protect this important area of Eden Prairie.”

The property targeted for the development is located at 9955 and 9875 Spring Road.

The most significant factor for those opposing the project is its close proximity of Riley Creek and the Fredrick-Miller Spring, sensitive areas they feel could be detrimentally affected.

But the council, when approving the project on May 10, denied the petition that was designed to stall the project.

The Fredrick-Miller Spring originates on a bluff on the west side of Spring Road, a city staff report stated. The development is planned for the east side of the road, the same side where generations have filled their jugs from a spigot fed by the spring.

John Dustman, president of Summit Envirosolutions, a consulting firm that analyzed the planned development and the surrounding area, said, “I just can’t imagine a way that surface water, stormwater from the development, would enter the recharge area of the spring.”

At the time of approval, plans were for Pulte Homes to begin development of the site in late summer or fall. However, construction at the site has not yet commenced.

Construction on the Southwest Light Rail Transit project was slowed this past year due to construction challenges at the north end of the project in Minneapolis, but work in Eden Prairie, for the most part, was to continue as planned.

The news was highlighted during a town hall session early in the year, at which time it was announced that the overall project wouldn’t be completed by the 2023 deadline date.

Sophia Ginis, manager of public involvement for Metro Transit, described the overall project as a “hotbed” of activity leading up to 2021 and went on to describe the construction activity that would be completed during the year.

Areas of construction identified as targets for continued work in 2021:

• Work on the south segment of Highway 62 LRT tunnel

Solar on the way

The city of Eden Prairie is partnering with Cooperative Energy Futures to construct a solar garden on the roof of the Eden Prairie Community Center, an energy source that will be available to residents via subscription.

To explain the project, online and in-person presentations were presented this past summer by Eden Prairie Sustainability Coordinator Jennifer Hassebroek and Timothy Denherder-Thomas, Cooperative Energy Futures co-founder and general manager.

“This is the second residential community solar project in Eden Prairie – Pax Christi Church has one in service already – so we anticipate that there are some residents who are already familiar with how community solar works,” Hassebroek stated in an email following the in-person presentation.

Hassebroek said the program is being made “available to those who are otherwise unable to participate due to cost, ownership or other barriers, and it supports the city’s climate action plan goal of achieving carbon neutrality in the community by 2050.”

Denherder-Thomas said the Community Center was chosen for the solar photovoltaic panels because it’s a city-owned facility in a sunny location.

“Households can subscribe to enough solar to cover up to 120% of your annual electric usage,” Denherder-Thomas said. “Each subscriber’s utility bill is credited with the electricity created by their portion of the solar garden.”

The state Legislature in 2013 passed a bill that requires Xcel Energy to participate in these types of programs.

The savings per year for the average user is somewhere between $60 and $100. So, not only will subscribers see smaller energy bills, but they will be joining the effort to reduce the city’s overall carbon footprint.

Those promoting the community solar effort describe the following advantages:

• Residents do not need to have direct solar access.

• There are no physical changes to residents’ homes.

• There are no debt obligations.

The solar garden is being made available to about 150 Eden Prairie residents, with 25% of the slots reserved for low-income individuals, renters and other marginalized communities.

Solar energy is emerging as an important piece in the country’s energy grid, but there is still much growth ahead, Denherder-Thomas said. “This is the first step in a much longer process of creating an energy system that works for us and is a system rooted in community, rooted in building community wealth,” he said.