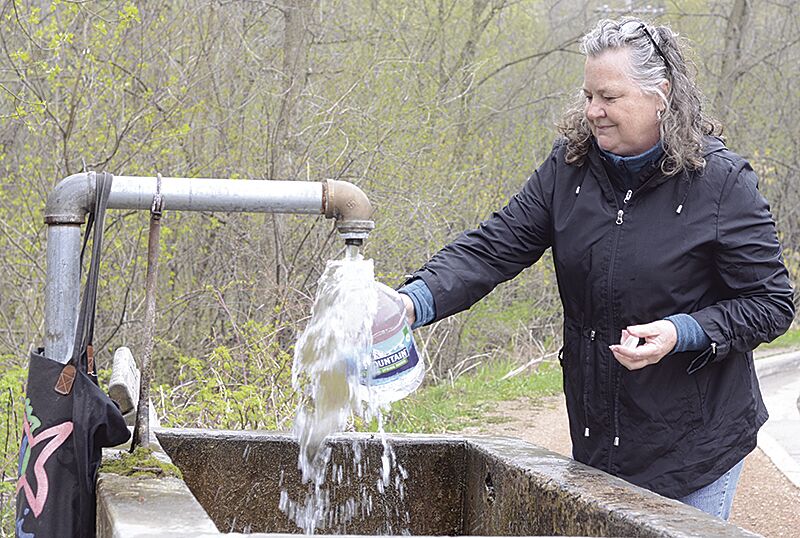 Deb Schmidt, of Maplewood, fills a jug at Fredrick-Miller Spring in Eden Prairie April 23. Schmidt was carrying on a tradition when she made the 30 minute trip – her mother used to take her to the spring to fetch drinking water when she was growing up in Maple Plain. 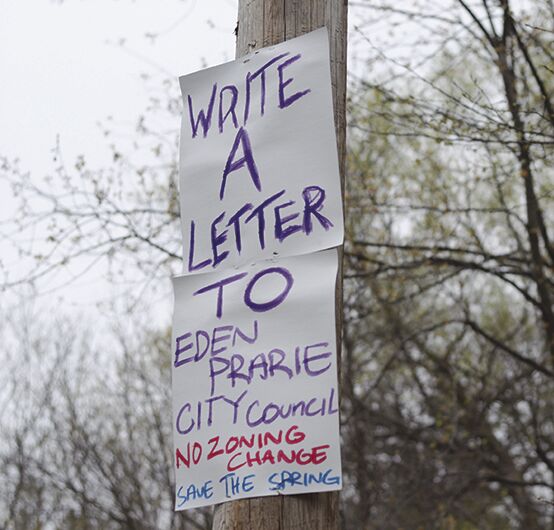 A sign at the Fredrick-Miller Spring in Eden Prairie tells visitors to appeal to the City Council to stop a development that has been proposed for a site near the natural resource. 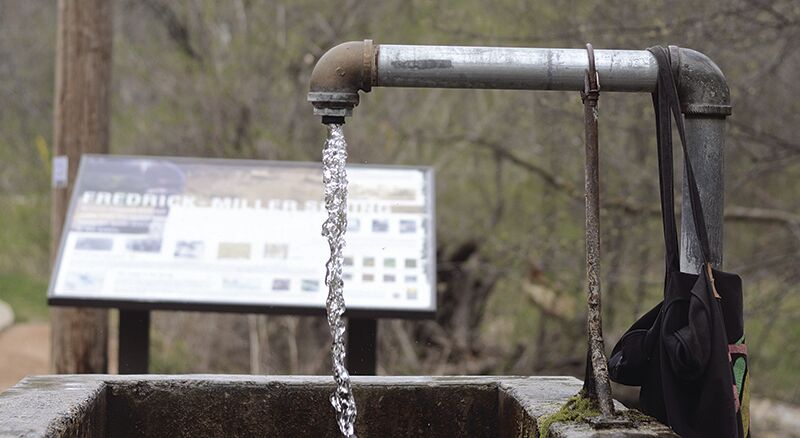 Water constantly runs from a spigot at Fredrick-Miller Spring, ready for waiting jugs. The spring has been in use since 1890, city staff noted in planning documents. (Sun staff photo by Andrew Wig)

City Council to consider proposal May 4

The Eden Prairie City Council on May 4 will consider a development proposed for a site near a popular spring, a potential project that has drawn considerable push-back from residents.

The Noble Hill development, already recommended on a 5-3 vote by the city’s Planning Commission, would include 50 housing units in an area many feel is environmentally sensitive due to its proximity to Riley Creek and Fredrick-Miller Spring.

Mayor Ron Case said he expects a strong and impassioned argument from opponents at the May 4 meeting, but he also publicly said there would need to be new significant information provided to change his position on the issue.

“Everything I’ve done in my homework, I have seen nothing yet that would lead me to believe we should not approve this,” the mayor told the Sun Sailor late last week.

Sue Bennett, an opponent of the development, said via email late last week that an updated presentation will be given to the council May 4.

“Today we received approval, but the process is not final yet. The request for an EAW now gets sent to the city of Eden Prairie for approval. This will also help to ensure that the proper steps are taken to protect this important area of Eden Prairie.”

After hearing public comment and discussing the issue, the councilmembers will consider the first reading of the zoning changes that, if approved, would send the matter forward to a second reading and a potential final approval as early as mid-May.

While Case said the studies and in-depth work on the proposal have already been completed, he also indicated he feels the councilmembers should already have an idea of which way they are leaning on the issue.

“By the time any project gets to this point where we’re a week away from it coming before the council, it’s gone through months of review,” Case said.

Property owners John and Carol Standal, with the developer, Pulte Homes, are asking to change the zoning district designation from Rural to R1-9.5, allowing for a preliminary plat of three parcels of 50 lots and four outlots on the 27.5 acres in question.

The property to be developed is located at 9955 and 9875 Spring Road. A single family home currently sits on the property, which was once a Christmas tree farm.

Most significant for those opposing the project is the close proximity of Riley Creek and the Fredrick-Miller Spring, sensitive areas they feel could be detrimentally affected.

In a report to the council, staff described comments received that question the project. Staff wrote: “Many of the comments include concerns about the Frederick Miller Spring located just south of the proposed project. The spring is in a small tributary valley of the Minnesota River and is located outside of the proposed project area. No changes are proposed to the spring as a part of this project.”

The spring, located on property owned by the city of Eden Prairie, has been in continuous use since 1890, and has become a well-known landmark in the area, staff wrote. The spring was designated as a Heritage Preservation Site in 1997.

Case anticipates the arguments May 4 will be provided in an effort to offset what the council has been presented by staff.

Bennett confirmed that early Monday. In addition to risks she sees for the spring, she notes that Riley Creek is already impaired, per the Minnesota Pollution Control Agency, and argues that the project will further degrade the creek, making it difficult or impossible to restore. Opponents to the project also warn of further environmental impacts, such as harm to critical bird habitat and other consequences of tree removal.

Case said the development of the area shouldn’t come as a surprise to anybody. It’s been recognized by city staff for years as an area of potential development.

Most recently, a 59-home development was approved, but the application was pulled from consideration before it got to the council, Case said.

“So, the point is that the idea that this land would be developed has been around for decades,” Case said. “This is not a surprise to anyone involved in government.”

The mayor also provided other information that he said makes the project feasible.

“This plan is giving us eight additional acres of buffer that will even more protect the creek in the spring,” he said. In addition, he believes arguments that runoff from the development don’t hold water.

“My belief so far is that this project will better protect both the spring and the creek and I believe that, partly because the last 30 to 40 years it was a Christmas tree farm and there have been fertilizers and insecticides put on all those trees. All that water ran right down the hill right into the creek,” he said.

However, with the 1991 Federal Wetlands Act, all new developments have to capture their water runoff, he said.

“This new project will have river protection water drainage ponds installed. So all the surface water will be captured and sifted prior to going into the creek. All the studies we’ve looked at show that the aquifer west and north and the homes closest to it are the ones impacting the spring’s water, not something to the north and east. There’s nothing in my mind that could make me believe that this new project would negatively impact the spring water,” he added.

Bennett said the objections are not just the water issues, but also about biodiversity.

“People love this unique area that just happens to be next to the spring. Our petition is about the biodiversity of this area and the removal of over 455 mature trees, the effects on the overall area, the wildlife and the Native American history and heritage. We have over 3,000 signers that support our petition,” she said.

Case said those voices and petition signatures are not lost on him.

“The one thing I’ve learned from this is how much I do appreciate people inside our city, but also these great numbers of people outside our city that love our Miller spring. My message to them is, ‘So do I.’ I would never vote for anything that would harm that.”

To that end, Case said his intent at the May 4 meeting is to recognize all those who have brought the issue to light.

“I’m going to thank all these people for elevating and highlighting the value of the spring. They have reminded us how valued it is outside of Eden Prairie.”

At the same time, his intent is to announce plans that could provide even more improvements to and around the spring – improvements that could include a structure covering the spigot and adding more spigots to the site.

If the first reading and zoning changes are approved May 4, Case said he understands there will be hurt feelings and disappointment.

“People are going to be upset if it passes, but they will walk away feeling like they have made a difference and reminded us of the value of the spring in the eyes of the region,” he said. “We, as Eden Prairie, are caretakers of it and want to do something to enhance their experience. I think that’s a positive.

He also said there are ways to minimize any adverse effects of the project.

“I Always vote for what I think is the best for the majority of all the people of Eden Prairie and then we try to mitigate the negative impacts on contiguous neighbors,” Case said. “We’ll look at how we can save more trees on the border, what we need to do for configuring the roads to be sure the impact on neighbors is minimized.”

He added, “Everything I’ve seen so far will lead me to vote for this project.”

The full council will consider the project at its regular monthly meeting in-person and online 7 p.m., Tuesday, May 4.