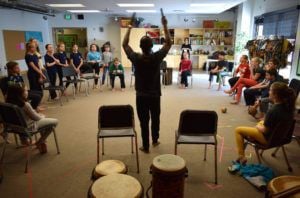 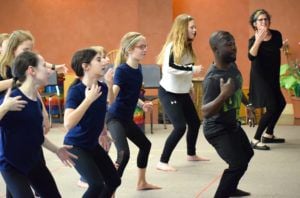 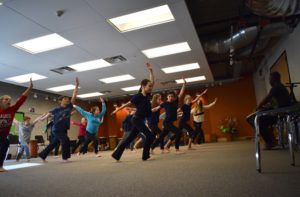 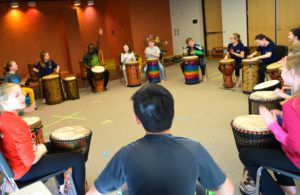 It’s Tuesday morning in Wayzata, and school is in session at The Blake School’s Highcroft Campus. It’s quiet – until it’s not – when a steady rhythm of West African drumming spills into the halls from a downstairs rehearsal room.

An investigatory look into the classroom reveals a drum circle of 18 fifth graders rehearsing for their spring play. Leading the group is Fatawu Sayibu, a Ghana-born master drummer, dancer and choreographer. Since early February, Sayibu has met with students from Blake’s Wayzata and Hopkins campuses. Drawing from a lifetime of experience, Sayibu has been teaching prekindergarten through fifth-grade students about West African culture through drumming and dance.

At 12 years old, Sayibu began teaching dance at a cultural center in Tamale, the capital town in the Northern Region of Ghana.

“Any time they would bring students from other schools, my friends and I would teach them,” he said.

Sayibu said he also taught many English-only-speaking volunteers through visual demonstrations, with help from his bilingual uncle.

Flash forward two decades and Sayibu is splitting his time between Minneapolis and Ghana. He first came to Minnesota in 2008 as part of an exchange program with the Clara Barton Open School in Minneapolis.

“I came for four months, but then ended up staying,” he said.

Today, Sayibu leads the West African Tiyumba African Drum and Dance Company in Minneapolis, which can be found performing around the metro area and throughout the Midwest region. Each month, Sayibu sends a large portion of his earnings to his dance school in Ghana, where he lives around three months of the year. Sayibu also uses the funds to support some students in their formal education and hopes to open a center where students can both learn dance and get a strong education.

“That is something we are trying to actually do,” Sayibu said. “It takes a long time, but I think we can do it.”

Sayibu’s current project is helping prepare Blake School fifth graders for their spring play “Akwaaba Anansi.” Since Feb. 9, his residency at the Wayzata and Hopkins schools have helped hone each student’s musical skills while introducing them to traditional Ghanaian drumming and dance.

Theater teacher Cynthia Hechter said the play, which is adapted from the West African folktales of Anansi the trickster spider, will feature each student acting, dancing, drumming and accompanying in the orchestra. Students will also be outfitted in authentic West African clothing, which was brought to the U.S. by Hechter’s friend.

“This is really an immersive project,” the teacher said.

Marina Battig and Donovan Schall, fifth-grade students at the Wayzata campus, said their lessons with Sayibu have opened their eyes to an exciting new form of art.

“And Fatawu is really easy to learn from because it’s all step by step,” Battig added.

The schools will each stage their own performance of “Akwaaba Anansi” next month.

“Everybody’s into it, and that makes a big a difference – it makes it easier to teach,” Sayibu said following a morning rehearsal. “And for me, I like sharing my culture, so I’m grateful that they are actually really into it that way.”