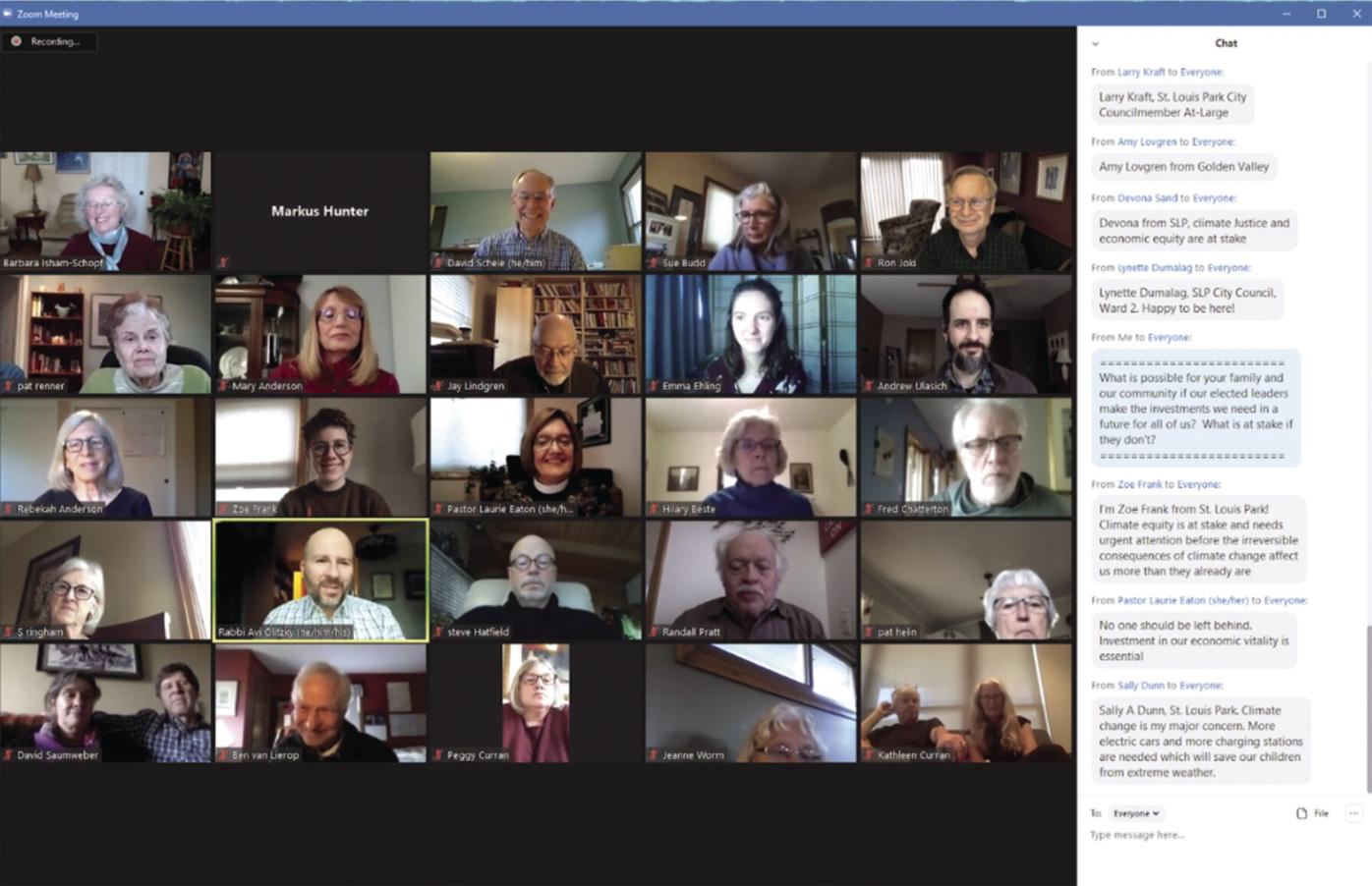 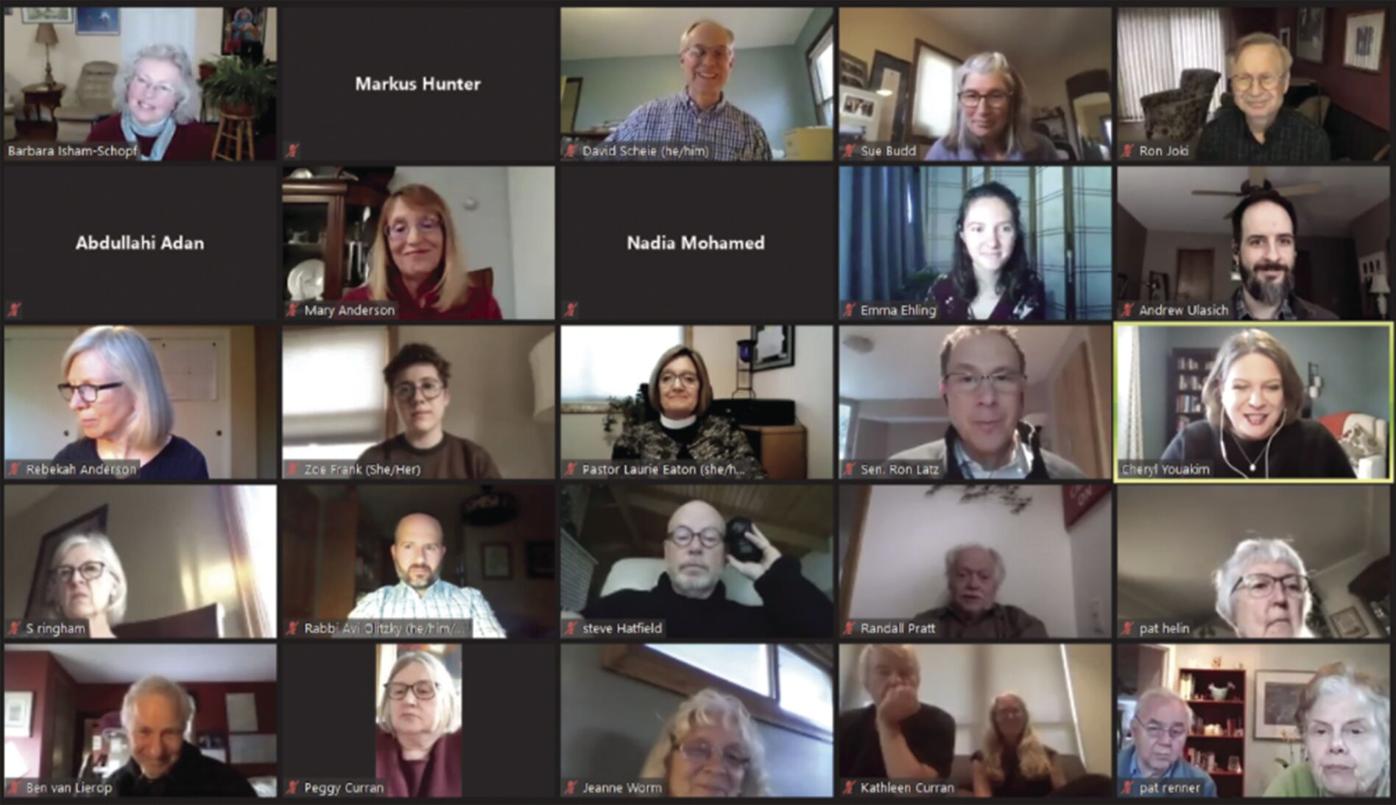 In a period of heightened focus on faith amid major holidays for several religions this spring, faith leaders pressed legislators to make changes to assist the poorest Minnesotans and the environment.

Rabbi Avi Olitzky, of Beth El Synagogue in St. Louis Park, said during the virtual meeting, “It’s not lost on me that here we are in the midst of Passover, of Holy Week and on the cusp of Ramadan. We are all cousins.”

Olitzky pointed to a commandment in the Torah to welcome the stranger to the point that they are no longer strangers.

“Strangers result when we do not make collective investments for all of us to thrive,” he said.

Abdullahi Adan, representing the Muslim faith, prayed for unity and not division.

The Rev. Laurie Eaton, a Plymouth resident who is lead pastor at Our Saviour’s Lutheran Church on Chicago Avenue in Minneapolis, referenced the prophet Isaiah’s word about the poor and oppressed.

“We, too, are called to care for our neighbors wherever there is poverty, captivity, lack of vision and oppression of any kind, and as citizens, we use the tools of government to help us accomplish these goals,” Eaton said.

“This is only one small endeavor,” Anderson said. “A much broader statewide effort is needed.”

She called for the creation of a state Department of Early Childhood and a task force to create a plan so that families would pay no more than 7% of their income for care and early learning from birth to age 4. A second bill she supported would make public pre-kindergarten education available for any families who want it.

Latz responded that he agrees the state should make investments in early childhood before kindergarten “to make sure everyone has that solid beginning.” He declined to commit to becoming an author on a bill to support a Department of Early Childhood, saying he needed to determine Gov. Tim Walz’s views on the proposal.

“I would imagine that a departmental proposal like this would come with a significant cost,” Latz noted.

Youakim called the idea intriguing but agreed with Latz that the Legislature would require cooperation from Walz “because it’s really creating a different state agency.”

Regarding early childhood education, Youakim said, “If we lived in Cheryl’s land, I would do universal pre-K for 4-year-olds in our public schools and then do a private-public model for birth to 3 (years old) to really hit all the children that need it.”

ISAIAH member Barbara Isham-Schopf advocated for more affordable housing and record expungement after sentences are served. She discussed a situation involved her oldest son, who is disabled but had been denied an apartment in Hopkins after a lengthy wait due to a record. Isham-Schopf called for more taxes on wealthy Minnesotans and corporations to fund more affordable housing.

A House subcommittee focused on preventing homelessness has considered restrictions on how far back landlords can look regarding eviction records, Youakim said. On taxes, she said, “We’re definitely OK with raising revenue.”

She added, “We’ve seen where the holes are in our safety net.”

Latz said he supports the governor’s proposal for “robust revenues.”

On records, he said he has sponsored expungement legislation in the past.

‘We still have work to do on that front, between felony convictions and evictions on one’s record,” Latz said.

“In recent years, I’ve been furious at the politicians who have attacked our democracy,” said Scheie.

“We in ISAIAH believe that every American should be able to vote freely, safely and easily,” said Scheie while advocating for voting rights for felons, automatic voter registration, early voting expansion and other measures.

Latz said he, too, is frustrated with those “who in my view are complicit in promoting false narratives that have the effect, and I believe in many cases the intention, of suppressing voter participation.”

Latz is a co-author of a bill that would provide for automatic voter registration and pre-registration at age 16, a permanent absentee voter list and restoration of voting rights for individuals with felony records. Youakim is also supporting the legislation.

Zoe Frank, a senior at St. Louis Park High School and a member of the St. Louis Park Environment and Sustainability Commission, asked how climate change impacts how legislators govern.

Youakim commended local initiatives like the installation of electric vehicle charging stations and solar panels. St. Louis Park officials have proposed a state law change that would allow tax incentives for the owners of large buildings who make energy improvements.

“There’s a lot of little things that we can do that all add up, but we also have to keep that bigger eye on the prize when it comes to the 100% clean energy bill in the future,” Youakim said.

Latz is supporting three bills that would deal with climate change, specifically relating to carbon sequestration, education for Minnesota students and a requirement for the state pollution control agency to direct climate resiliency planning and programming.

Youakim said, “I think there is room for some bipartisan support on a lot of the climate issues.”

Isham-Schopf concluded the meeting by saying, “Whether Black, brown, white, wherever we live, or however long we’ve been here, we need to get this state in a better shape.”