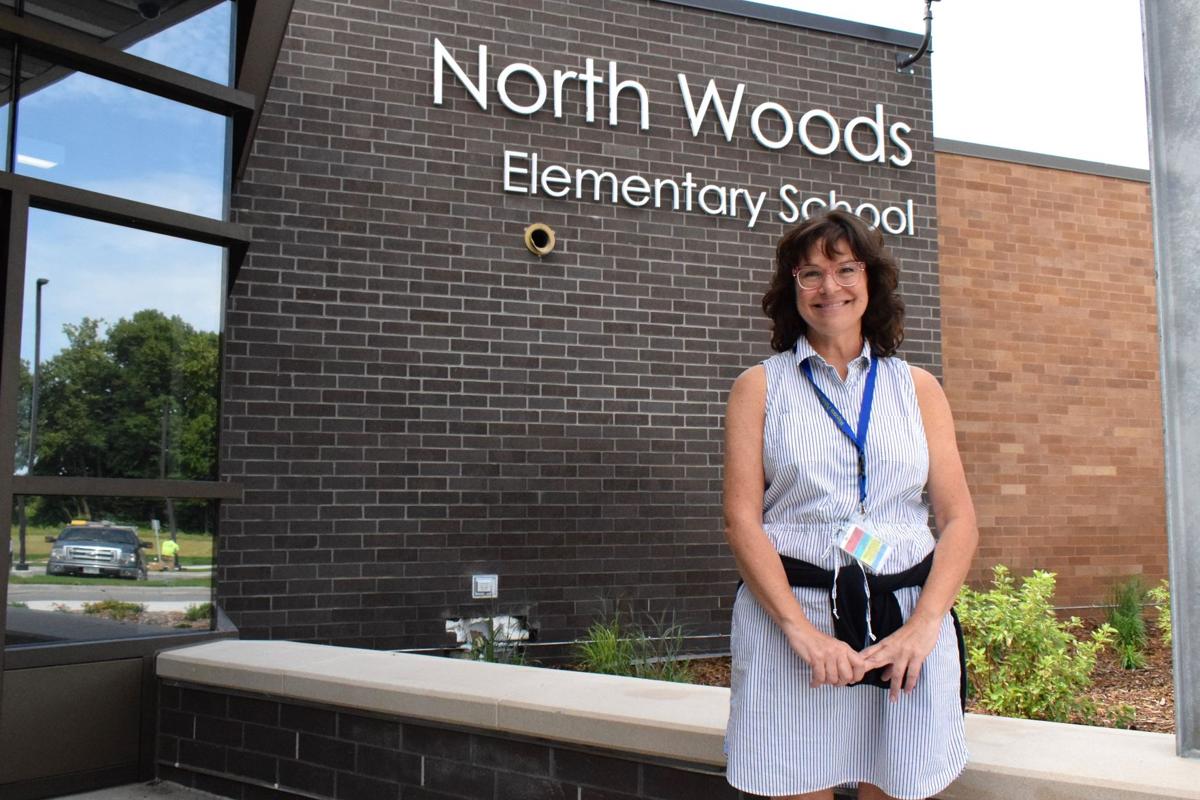 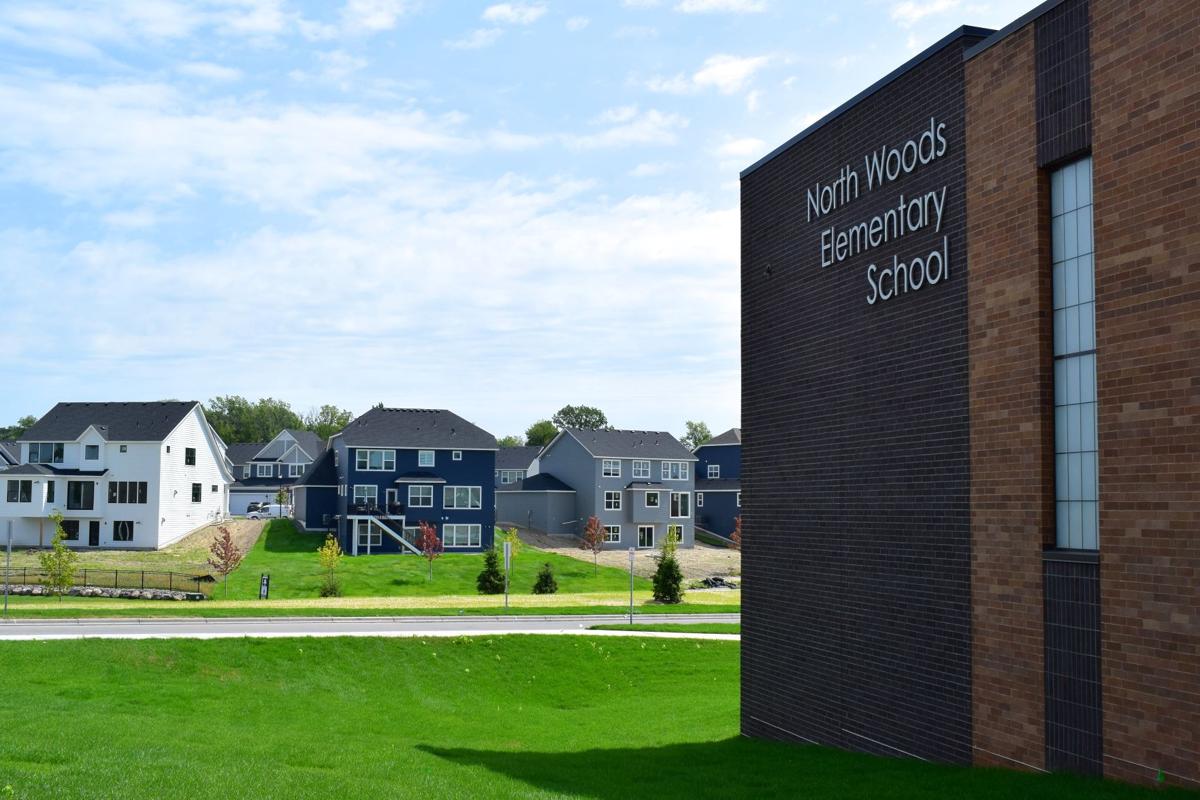 A crop of new houses can be seen from the front of North Woods Elementary, which will open this school year. (Sun photo by Jason Jenkins) 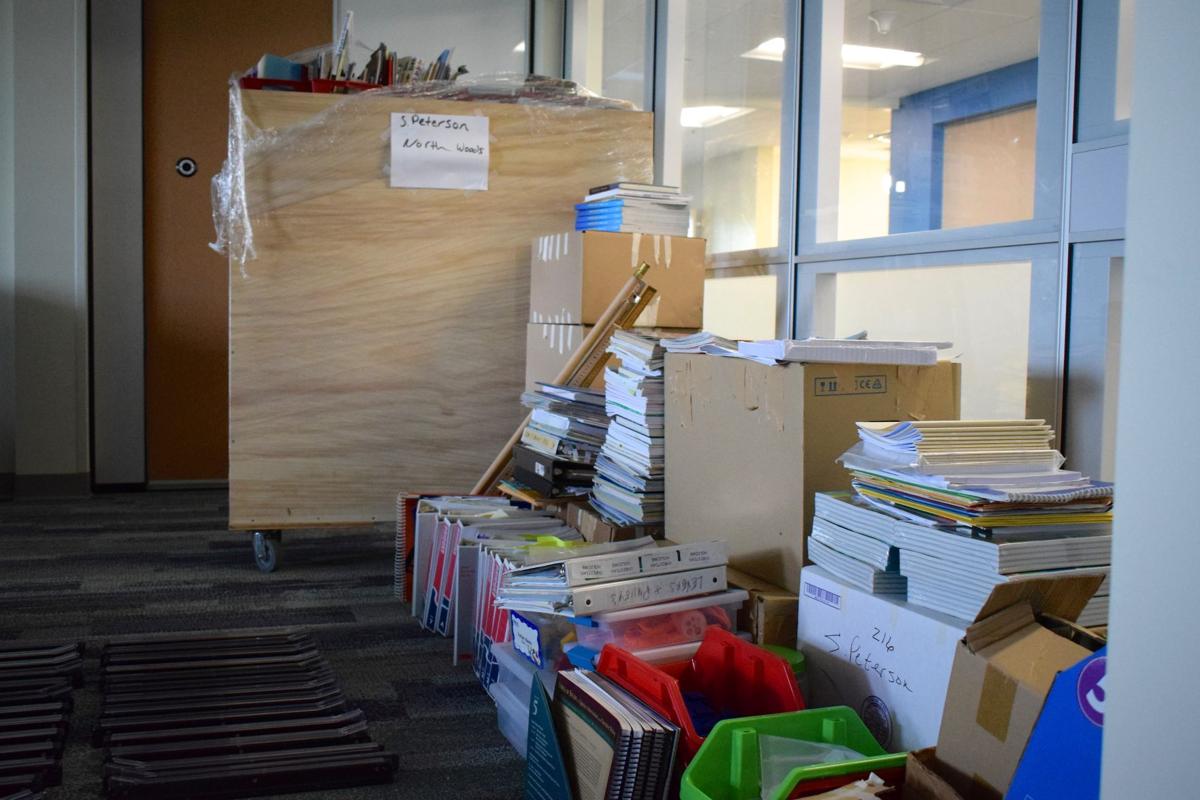 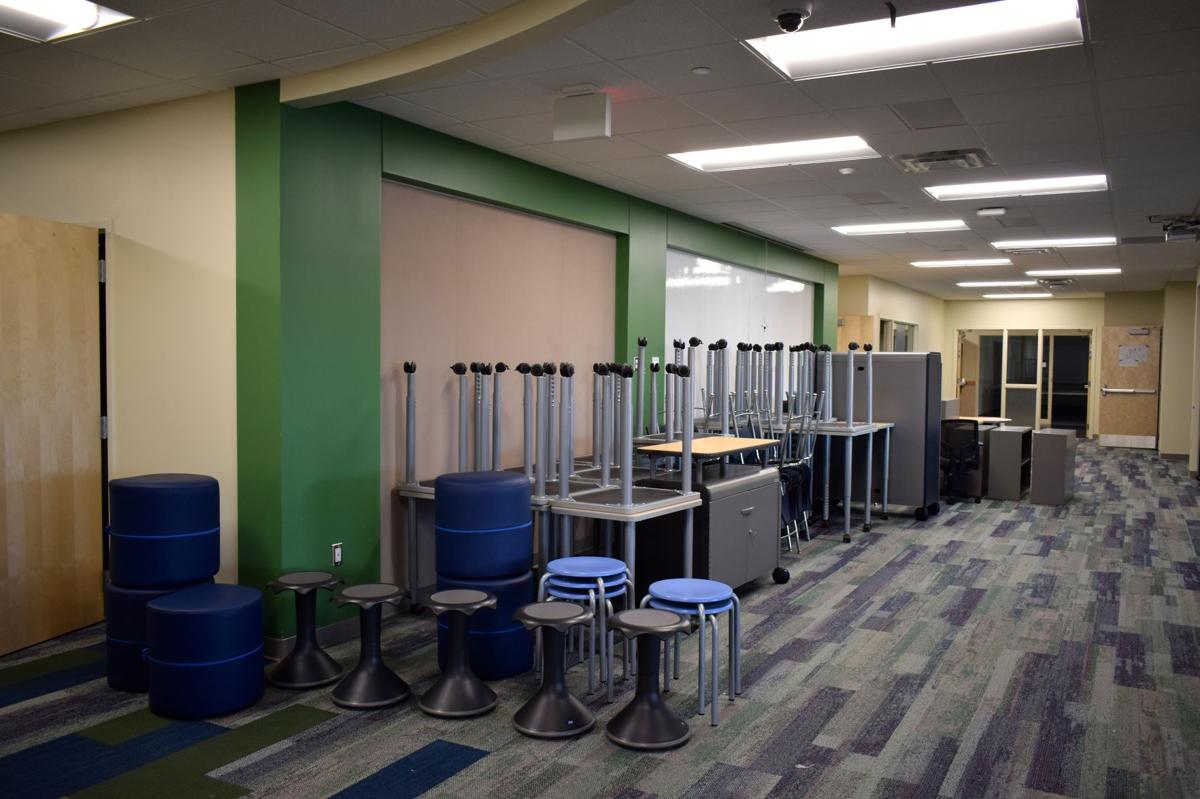 Tables and chairs are stacked in a hallway inside the new North Woods Elementary. (Sun photo by Jason Jenkins) 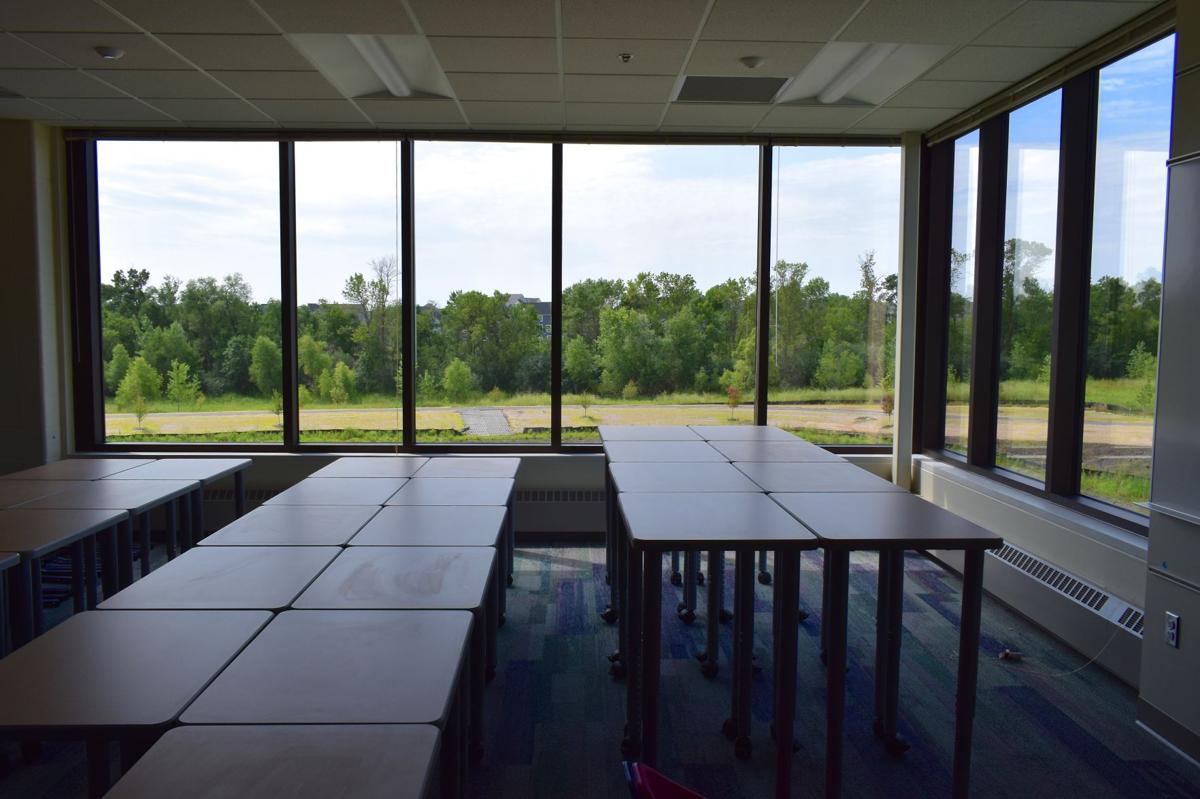 A classroom in the new North Woods Elementary overlooks a line of trees. (Sun photo by Jason Jenkins) 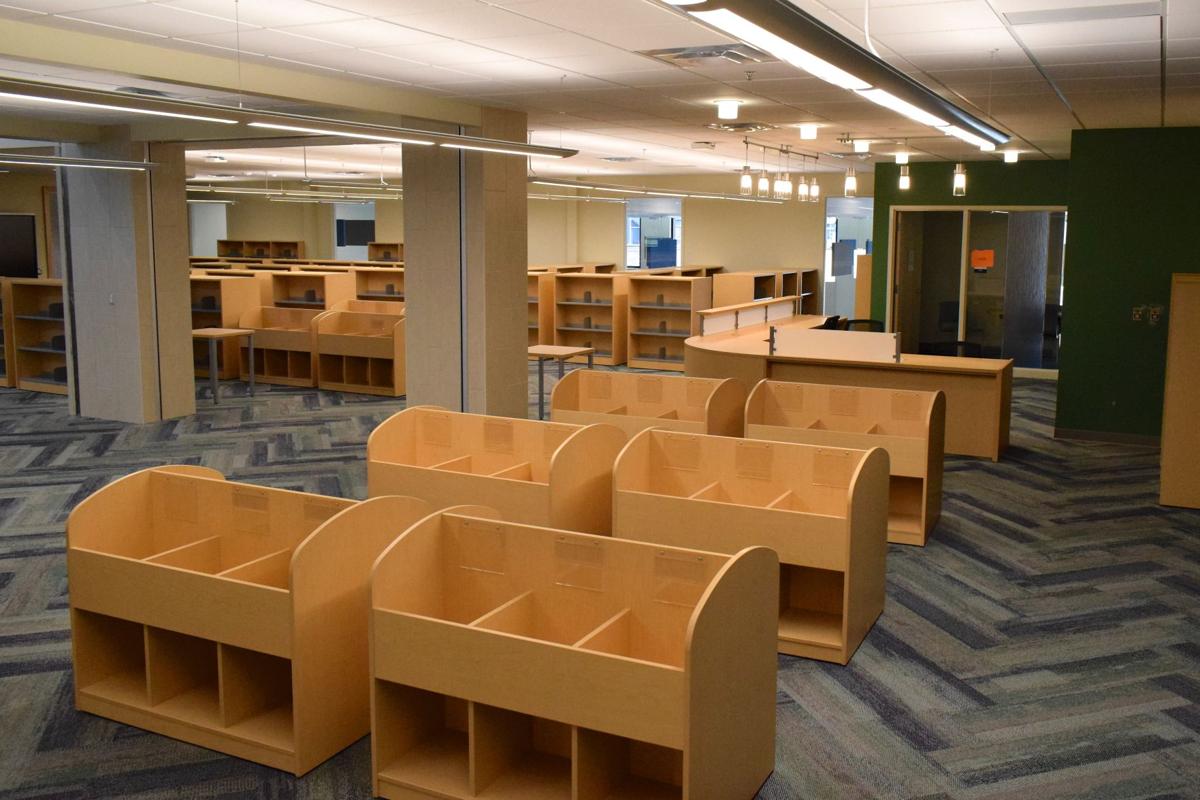 The media center at the new North Woods Elementary, which the district is preparing to open to students this school year. (Sun photo by Jason Jenkins) 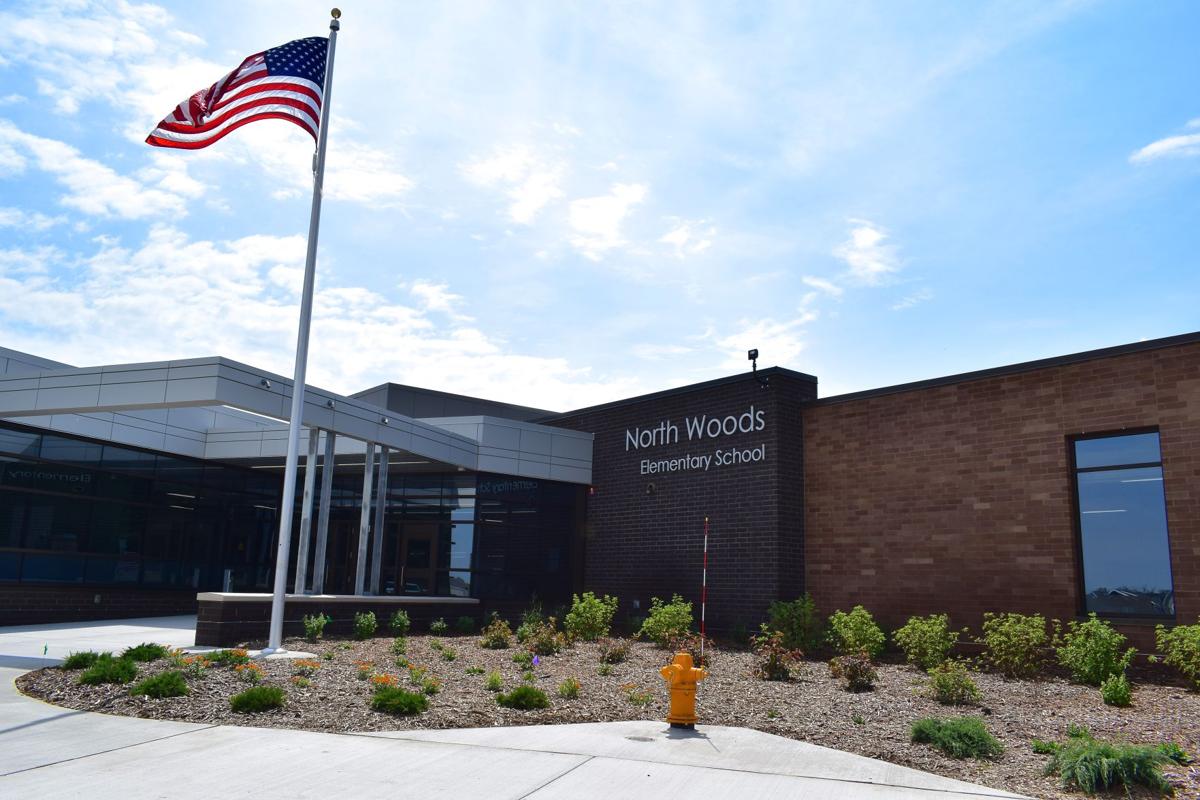 More than 560 students are expected to walk through the doors of the new North Woods Elementary Tuesday, Sept. 3, for the start of the 2019-2020 school year. (Sun photo by Jason Jenkins)

With the first day of school a month away, the Wayzata School District is preparing to open a brand new school: North Woods Elementary.

More than 560 K-5 students are expected to walk through the doors of the new building, which can accommodate more than 800 students, for the start of the 2019-2020 school year Tuesday, Sept. 3.

Longtime Wayzata School District educator Jenny Berg will serve as the school’s principal. Berg has been with the district for 22 years, spending the past 20 serving as the associate principal at Central Middle School.

“It’s been an amazing opportunity,” Berg said. “It’s just exciting to do something new and fresh. I know a lot of people in the district, so it’s helpful when hiring, and I think people have a comfort level with me because I’ve been here for quite a while.”

Teachers will begin setting up their classrooms the week of Aug. 5, Berg said, and students and parents will get a chance to meet the teachers at an open house Wednesday, Aug. 28.

The open house will also be an opportunity for families to tour the new school, which was built just northwest of Wayzata High School.

The school will be filled with a mix of students new to the district and children transferred from Greenwood, Oakwood and Meadow Ridge elementary schools.

For students moving over from Meadow Ridge, the new building will look very familiar since it was built using similar designs as that school, which opened to students in 2016.

North Woods is the district’s ninth elementary school, and is opening just a few miles from Meadow Ridge in one of the district’s fastest growing areas for new housing.

The new school will help accommodate the district’s growing enrollment numbers. At the beginning of the 2017 school year, around 11,600 students were attending Wayzata Public Schools. The current number of students enrolled in the district is around 12,000.

“I think it will help with the growth,” Berg said. “There were some existing buildings that were at, or over, capacity.”

In February 2017, members of the school district’s Growth Task Force recommended to the Wayzata School Board that a new elementary school be built to accommodate the north and northwest areas of Plymouth, as well as segments of Corcoran and Medina. The 25-member group was tasked with reviewing student enrollment, housing trends and demographic data and advising the school board on how to plan for anticipated growth at the elementary level.

The need for a new school prompted a funding request to be placed on the November 2017 ballot. Voters approved the request, which totaled approximately $70 million in bond funding. About $42 million of that was for the new school. The remaining $28 million will fund additional facility needs, including work to improve traffic flow and pedestrian safety at the elementary schools and Central Middle School ($6.6 million); work to enlarge the cafeteria and food service areas at Central Middle School ($6 million); renovations to elementary and middle school media centers ($9.6 million); and improvements to the performing arts spaces at East and West middle schools ($6 million).