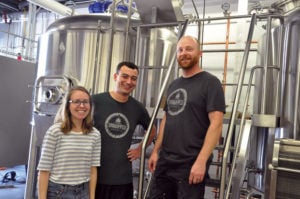 Owners Megan and JD Park are excited to open Unmapped Brewing in Minnetonka in early June. The taproom and brewery will offer a wide variety of beers with a focus on Belgian styles, crafted by head brewer Derek Allmendinger whose previous experience includes brewing at Surly, Summit and Schell’s. Pictured, from left, are Megan and JD Park and Allmendinger. (Sun Sailor staff photo by Gabby Landsverk) 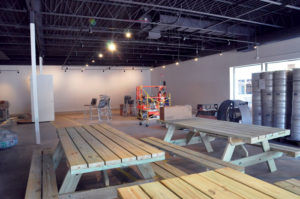 The new taproom at Unmapped Brewing opens in early June, offering a variety of beers to enjoy both inside the spacious taproom space as well as on the outdoor patio, just in time for summer.

Owners Megan and JD Park are excited to open Unmapped Brewing in Minnetonka in early June. The taproom and brewery will offer a wide variety of beers with a focus on Belgian styles, crafted by head brewer Derek Allmendinger whose previous experience includes brewing at Surly, Summit and Schell’s. Pictured, from left, are Megan and JD Park and Allmendinger. (Sun Sailor staff photo by Gabby Landsverk)

The new taproom at Unmapped Brewing opens in early June, offering a variety of beers to enjoy both inside the spacious taproom space as well as on the outdoor patio, just in time for summer.

Unlike Northeast Minneapolis, where beer drinkers can scarcely swing a stein without hitting at least two breweries (and a gaggle of tipsy enthusiasts), the west metro’s suds selection is decidedly more sparse. Although well-served by businesses like Excelsior Brewing, LTD Brewing Hopkins, and Wayzata Brew Works, this destinations are fewer and farther between for bar-hopping hopheads. And Minnetonka, for the most part, has been oddly beer-less since Lucid Brewing left for the North Loop.

Enter JD and Megan Park, an entrepreneurial Minnetonka couple hoping to quench the thirst for craft beer in the west metro with their new business, Unmapped taproom and brewery.

“It’s so wonderful. This has been a long time coming,” Megan said. “We both felt strongly about opening in the western suburbs. There’s still a lot of room for growth here."

After months of preparation, beginning with obtaining a liquor license in October 2016, the couple plans for a soft opening around June 9, depending on how quickly they complete their equipment inspections.

Their new taproom and brewing space, at 14625 Excelsior Blvd. in Minnetonka’s Glen Lake neighborhood, is quickly taking shape, with the brewing system in place and the patio and bar furnishings nearly complete.

“It’s amazing to see the progress that’s been made,” said JD.

The starting lineup of brews will include the Topographic Wit, the MinneSaison and an India Pale Ale. These easy-drinking, low-alcohol beers are made for summer patio sessions, and are planned to be the backbone of the tap list.

A Belgian quadrupel ale is soon to follow, taking the taps in a different, and distinctly darker, direction. The quad, appropriately called “Quadruplication” is strong and nuanced, with notes of fruit and caramel. It’s a favorite of both the Parks and their head brewer, Derek Allmendinger.

“It’s a big beer — complex, with a good balance of sweetness but not syrupy,” Allmendinger said. “There’s a lot to enjoy in that beer, and it’s good for any season.”

JD said the menu will be no-holds-barred in terms of beer styles, but Belgians hold a special place in his heart, and pint glass.

Within a few weeks, Unmapped will have five to six beers available, will plans for as many as 12 distinct offerings at once by the end of the summer.

JD added that a pilot system will allow for some special small-batch brews, including unique recipes or experimental styles. He hopes to someday add barrel-aged and soured beers to the line-up as well, exploring a limitless horizon of hops, malt and barley mixes.

“It’s a very ambitious tap list. We hope to keep things interesting in the taproom,” he said.

Interesting, but also welcoming, Megan added, with an approachable menu for newbie beer drinkers as well as heartier fare for veteran hopheads.

Megan said when the pair moved back to Minnesota, she immediately felt welcome in the craft beer community. She hopes the taproom will replicate that laid-back, inviting atmosphere.

“We really want to make everyone feel like they’re part of the Unmapped family,” she said.

A native Minnesotan and graduate of Minnetonka High School, Megan met JD in his home state of South Carolina, where they attended college.

The name of their entrepreneurial endeavor dates back to the earliest roots of their relationship, taking weekend trips to go exploring, charting a course on the map and then discovering what lay beyond it.

“It about trying something new, going somewhere you’ve never gone before,” JD said. “Whatever that means for you, whether it’s a new beer or a new style, whether you’re new to beer or already know what you like.”

For JD, beer has been a passion since the beginning, both as a consumer and an avid homebrewer. Many of the beers at Untapped are variations of those he’s made at home.

It’s a big leap, however, from making beer for yourself to opening a brewery, he acknowledged.

This is where Allmendinger comes in. Hailing from an impressive history of brewing gigs at Schell’s, Summit and Surly, he is the mastermind of the brewing operations at Unmapped.

“He reached out to us and we just clicked, immediately. We have a very similar philosophy when it comes to beer and that’s quality first,” JD said.

“He’s been a great asset to us and we’re very lucky to have him here,” Megan added.

Allmendinger helped pioneer quality control programs at his former workplaces, distilling the art of great beer into an exact science.

“We’re going to take everything we’ve learned and put it to good use here,” he said. “Quality is the most important thing for us. There’s a lot of people making good beer in Minnesota, but that’s the first priority for us.”

Allmendinger added that while the tap list will be adventurous, he’s not trying to blow any of the other local breweries out of the water. His motto is more of an “if it ain’t broke, don’t fix it” approach, aiming to add Unmapped’s offering to the already-impressive pantheon of Minnesota beers, including his personal all-time favorite, Surly Furious.

“That’s what really separates a great brewery from a bad one — when your best is always your best, all the time,” he said.

Even with JD’s passion, Megan’s entrepreneurial spirits and Allmendinger’s expertise, the taproom and brewery opening was still only possible through the help of 60 investors, who contributed the resources to help make the Parks’ dream a reality.

“They’re definitely not silent partners — they’ve been helping us every step along the way, from networking to advice,” JD said.

Now, all that hard work is about to come to delicious fruition, with brewing slated to begin the week of May 22.

Unmapped Brewing is tentatively planning a grand opening in July, once they’ve had a chance to ramp up production and show off all the brewery has to offer.

With the number of people already knocking on the doors, it looks like they’ll have no shortage of business.

“We’ve got a lot of community support, we’ve heard from a lot of people that are excited for us to open,” JD said. “The community is ready to go, we’re ready to go. Now all we need is the beer.”