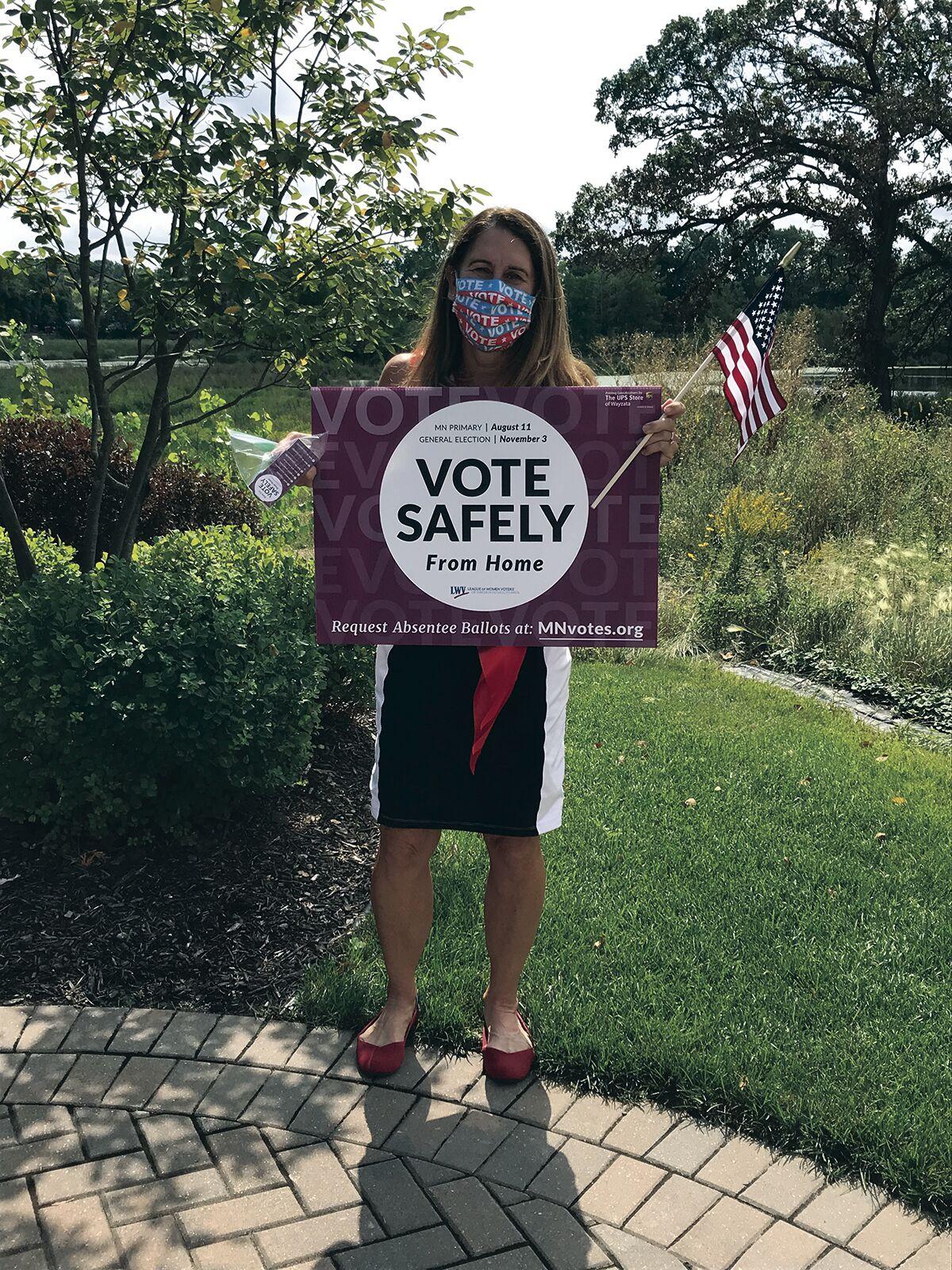 League of Women Voters-Wayzata Plymouth Area member Mary Leadholm of Wayzata gets ready to walk through a local farmers market promoting the Vote Safely from Home, a campaign encouraging absentee voting in light of COVID-19 concerns. 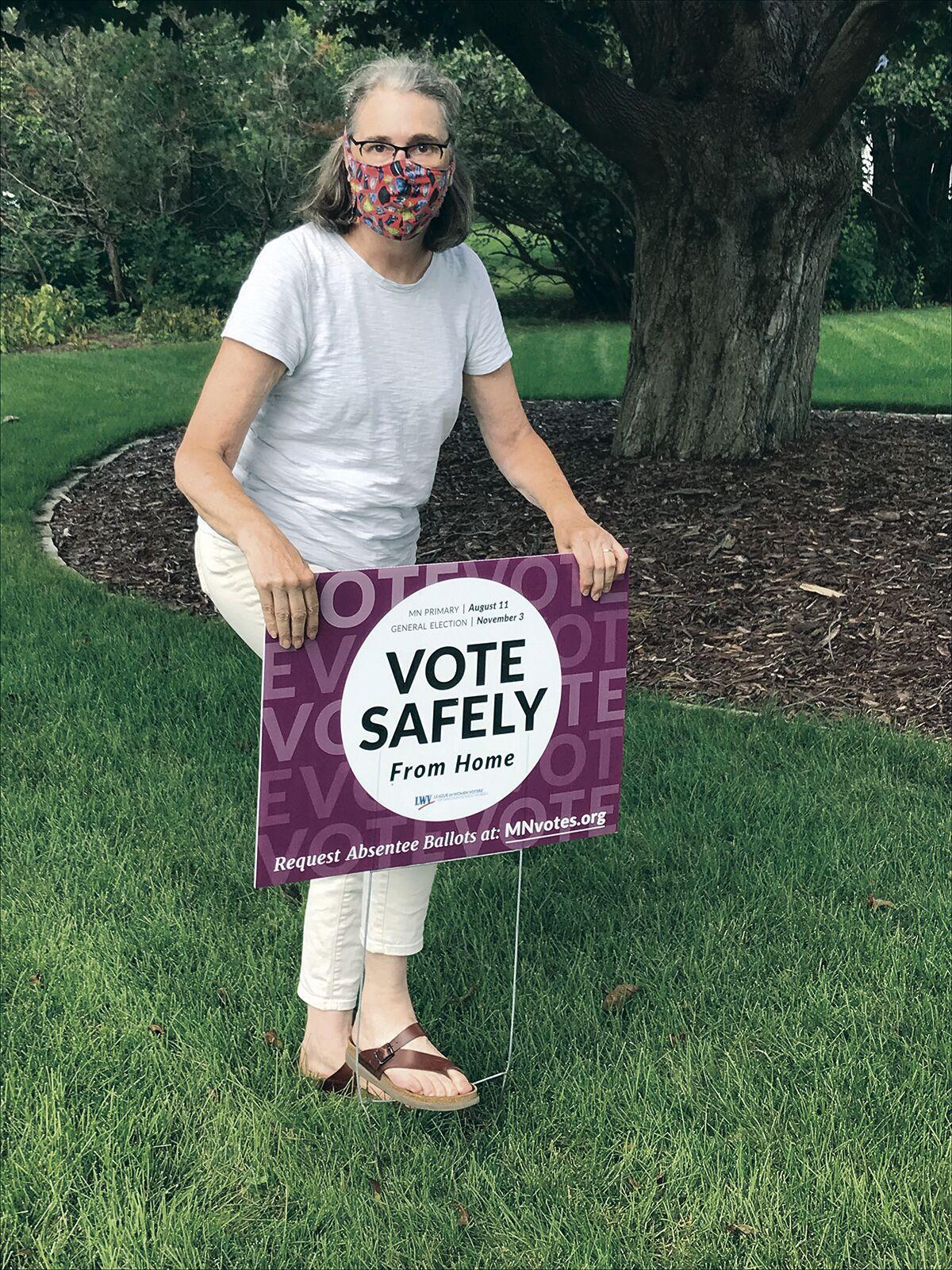 League of Women Voters-Wayzata Plymouth Area member Mary Leadholm of Wayzata gets ready to walk through a local farmers market promoting the Vote Safely from Home, a campaign encouraging absentee voting in light of COVID-19 concerns.

Like most other organizations, the League of Women Voters has shifted the way the organization conducts events in light of COVID-19.

With the fall election less than two months away, the process for informing voters may have changed, but the league’s mission has not.

The League of Women Voters is a 100-year-old nonpartisan nonprofit organization that encourages informed and active participation in government and influences public policy through education.

The national organization is represented through local chapters made up of men and women members, who volunteer their time to educate and promote local elections, including the Wayzata and Plymouth Area chapter that represents seven communities, including Plymouth, Wayzata, Medina and Corcoran.

“We’re feeling very strongly that it’s important to inform voters about the candidates and their positions so they can be educated before going to the polls or filling in their absentee ballots,” said Rebecca Hawthorne, a Wayzata resident and president of the League of Women Voters-Wayzata and Plymouth Area, which is in its 66th year as a chapter.

The COVID-19 restrictions have brought about new challenges this year as the chapter continues the effort to inform constituents of races affecting them.

One of those ways is by shifting from live and in-person candidate forums to recorded virtual forums.

Hawthorne relayed that the national league was “uncomfortable with online forums” at first, but has since come around, having tested the virtual forum process before the August primary.

“We either go online or we don’t have a forum,” Hawthorne said.

While there were technical challenges, such as making sure candidates could be seen and heard clearly, the League learned from it and was encouraged to go ahead with virtual forums in advance of the general election on Tuesday, Nov. 3, Hawthorne explained.

To prepare, League members work with city clerks to frame non-biased questions pertaining to issues specific to each community.

They also continue to seek audience participation in which community members can submit questions for candidates in advance to lwvwpa@lwvmn.org. Questions can be submitted until the day before the forum.

Links to the candidate forums can be accessed at LWVwpa.org. Some forums will also be available on local cable channels and through respective city websites.

“We’re pivoting on a daily basis to meet the needs of the cities and candidates,” Hawthorne said, noting it may take up to 72 hours before the forums will be posted online.

Hawthorne has been a member of the League of Women Voters for three years and was encouraged to join by her mother-in-law.

“I think voting is a critical piece of democracy,” she said. “And educating voters is an absolute responsibility.”

The League is also promoting its Vote Safely from Home campaign to encourage voter participation in light of COVID-19 concerns.

To do this, the League has been delivering absentee ballot forms and handing out signs through the communities, including senior housing developments and walking through farmers markets.

Absentee ballots allow citizens to vote at home and ballots can either be mailed to the address provided on the ballot or hand-delivered to the city clerk’s office, Hawthorne explained.

Request an absentee ballot at the Secretary of State website, mnvotes.org or by calling 651-215-1440.

The following are the candidate forums and the dates they will be recorded. Recordings will be available for public viewing after the forum, depending on the platforms and municipalities.

Links can be accessed at LWVwpa.org. Some forums will also be available on local cable channels and through respective city websites.

Community members may submit questions for the candidates in advance to lwvwpa@lwvmn.org.

Questions should be sent by the day before the forum and indicate the name of the forum in the subject line.

Invited candidates for State Representative 33A are Caitlin Cahill and Jerry Hertaus and for Senate District 33, David Osmek and Gretchen Piper.