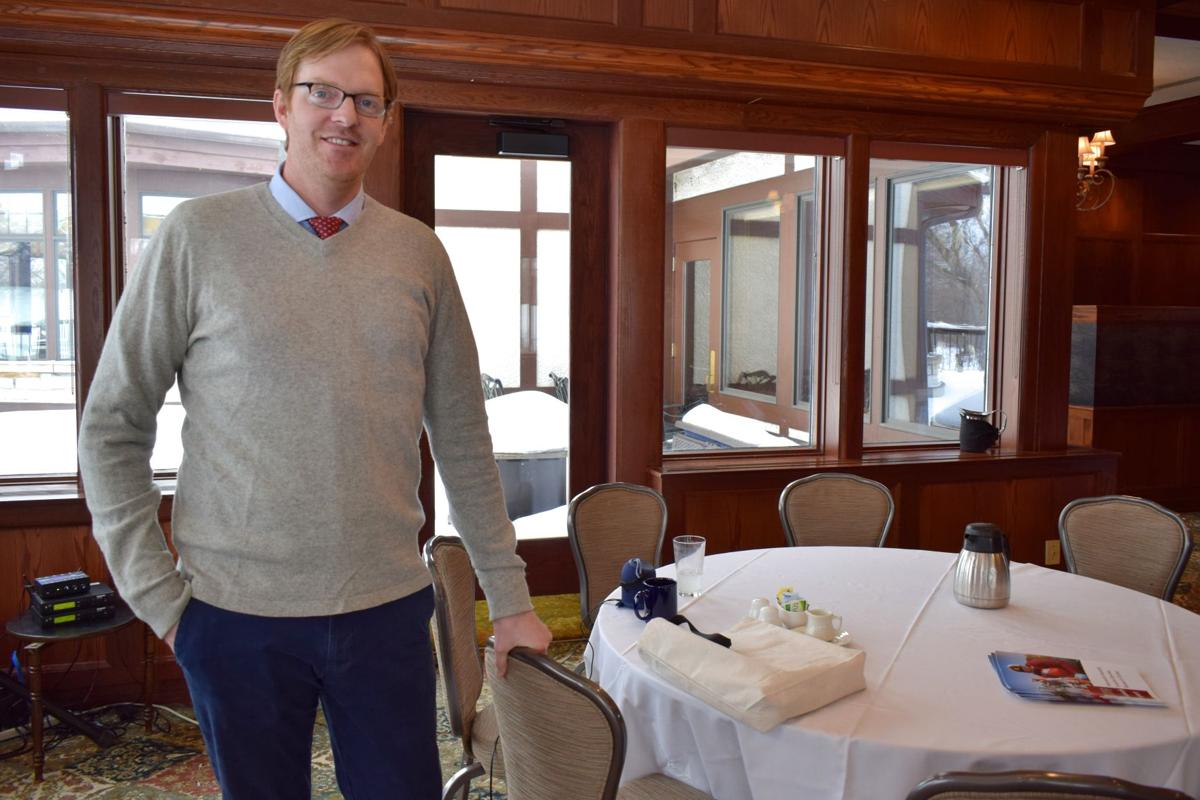 Nick Phelps, director of the Minnesota Aquatic Invasive Species Research Center at the University of Minnesota, spoke at the Jan. 22 Wayzata Rotary Club meeting about the work the center is doing to fight invasive species and prevent them from spreading in the state’s lakes, rivers and wetlands. (Sun photo by Jason Jenkins) 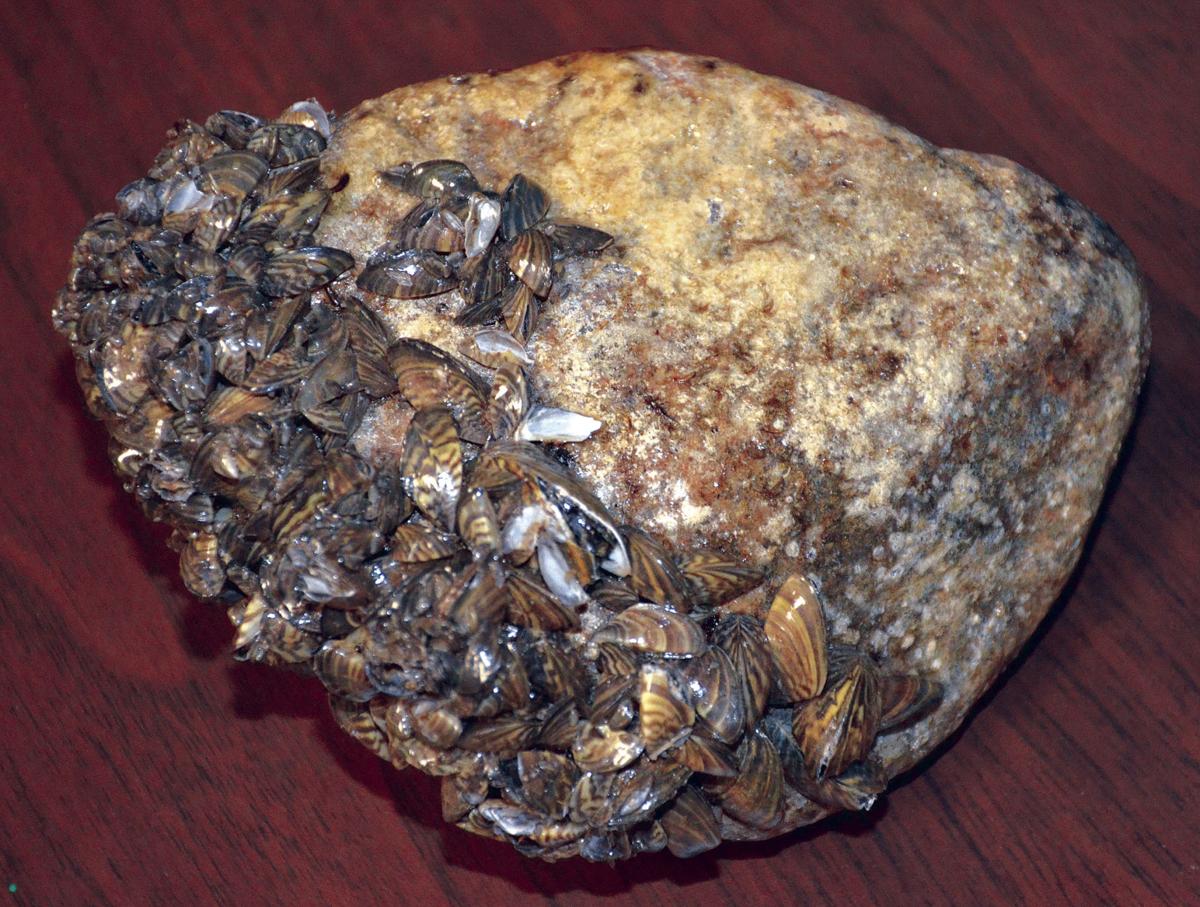 Zebra mussels are small, fingernail-sized invertebrates and are one of the most widespread invasive freshwater animals in the world. (Submitted photo)

In 2012, a group of researchers at the University of Minnesota joined in the fight against aquatic invasive species and their negative impacts on the state’s lakes, rivers and wetlands.

“I believe strongly that through science and innovation, we can get ourselves out of this problem,” said Nick Phelps, director of the Minnesota Aquatic Invasive Species Research Center at the university.

Phelps, who spoke as a guest during the Jan. 22 Wayzata Rotary Club meeting, detailed the center’s work in developing research-based solutions to reduce the impacts of invasive species and preventing them from spreading.

The aquatic invasive species that can currently be found in Lake Minnetonka, which has been a popular study site for the research center, are common carp, zebra mussels and invasive plants such as Eurasian watermilfoil, curly-leaf pondweed, flowering rush and purple loosestrife.

A recent area of focus for Lake Minnetonka has been zebra mussels. The small, fingernail-sized invertebrates were first detected in the lake in 2010 and are one of the most widespread invasive freshwater animals in the world.

Zebra mussels can be a costly problem for cities and power plants if they clog water intakes. Zebra mussels also cause problems for boaters and attach to rocks, swim rafts and ladders where swimmers can cut their feet on the mussel shells. Invasives like zebra mussels can also displace native species, harm fish populations, damage habitats and impair water quality. They are often spread to other lakes by hitching rides on boats and watercraft equipment.

“When I talk about invasive species, zebra mussels are usually the first thing people think about in Minnesota. It’s a nasty one,” Phelps said, noting that there are about 200 lakes statewide that are infested with zebra mussels. “We’ve spent a lot of time thinking about control and management. Once it gets introduced, how can we get them out of there? And this is where innovation’s really picking up some steam.”

This past summer, the research center tested EarthTec QZ, a copper-based commercially available molluscicide, in St. Albans Bay on Lake Minnetonka. Phelps said the strategy involves using a low dose of the chemical to knock out the juvenile state of zebra mussels, which are much more sensitive. He said this method, which has shown promising preliminary results, could prove more cost-effective and would put less copper into the water.

“We’re still sorting out the non-target impacts and looking at the water chemistries. … But what this shows right now is this is promising and this is going to guide our research going forward to this next summer,” Phelps said.

Also this past summer, research center officials announced that they had successfully sequenced the zebra mussel genome after five years of work.

Phelps said sequencing the zebra mussel genome could help scientists isolate markers to study spread and explore possible genetic weaknesses that can be targeted for control through genetic engineering.

Also in 2019, the center completed research projects involving the testing of a fish transport system to remove thousands of invasive common carp from Long Lake.

The center also provided the first evidence of starry stonewort’s impacts on native plants in lakes. Starry stonewort, which hasn’t been found in Lake Minnetonka, is an invasive grass-like algae that was first found in Lake Koronis in 2015 and has since spread to several Minnesota lakes. The algae displace native aquatic plants and can interfere with recreational activities due to the dense mats it can produce at the water’s surface. Starry stonewart is believed to be spread from one body of water to another by the unintentional transfer of plant fragments, or mud containing them, via trailered boats, personal watercraft, docks, boat lifts, anchors or any other water-related equipment that is not properly cleaned.

To prevent the spread of invasive species, the Minnesota Department of Natural Resources directs boaters to clean weeds and debris from their boat, remove drain plugs and keep the plugs out while traveling and to dispose of unused bait in the trash before leaving a water access. For boats left in the water more than 24 hours, or known to have been in infested waters, owners are encouraged to spray their boat with high-pressure water, rinse with hot water and dry for at least five days. For additional recommendations, visit mndnr.gov/AIS.

Outreach is another area where the research center is putting its focus.

“We’ve done a lot but we have a long ways to go, both on the research side but also making these research tools out there available for the people who need them,” Phelps said.

For more information on the program and the Minnesota Aquatic Invasive Species Research Center, visit maisrc.umn.edu.