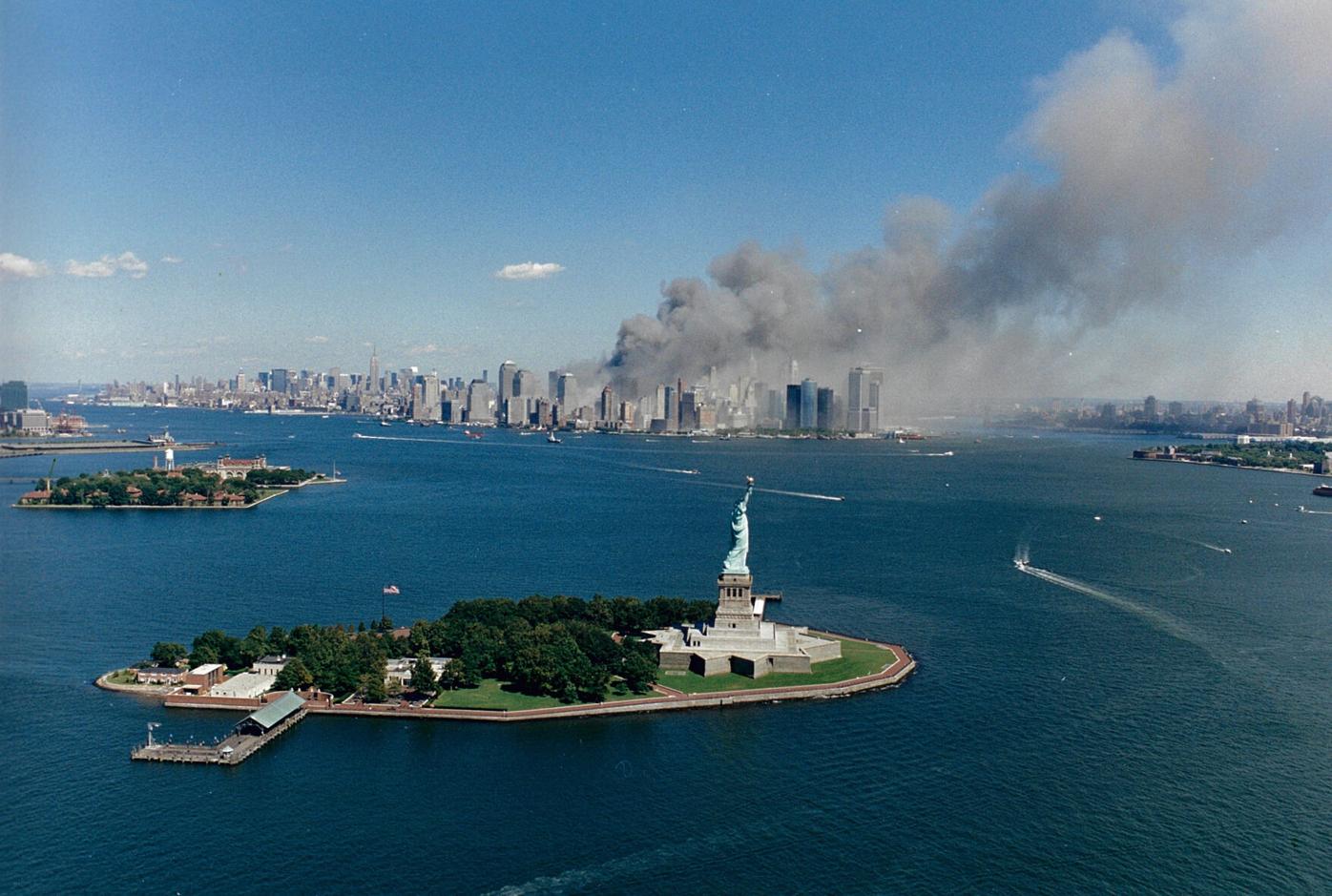 This photo of the New York City skyline, taken by Dan Murphy on Sept. 11, 2001, is among the photos that will be included in a 9/11 exhibit at the Minnetonka Center for the Arts. The opening of the photo and video exhibit coincides with the unveiling of a new 9/11 memorial in downtown Wayzata. (Photo by Dan Murphy) 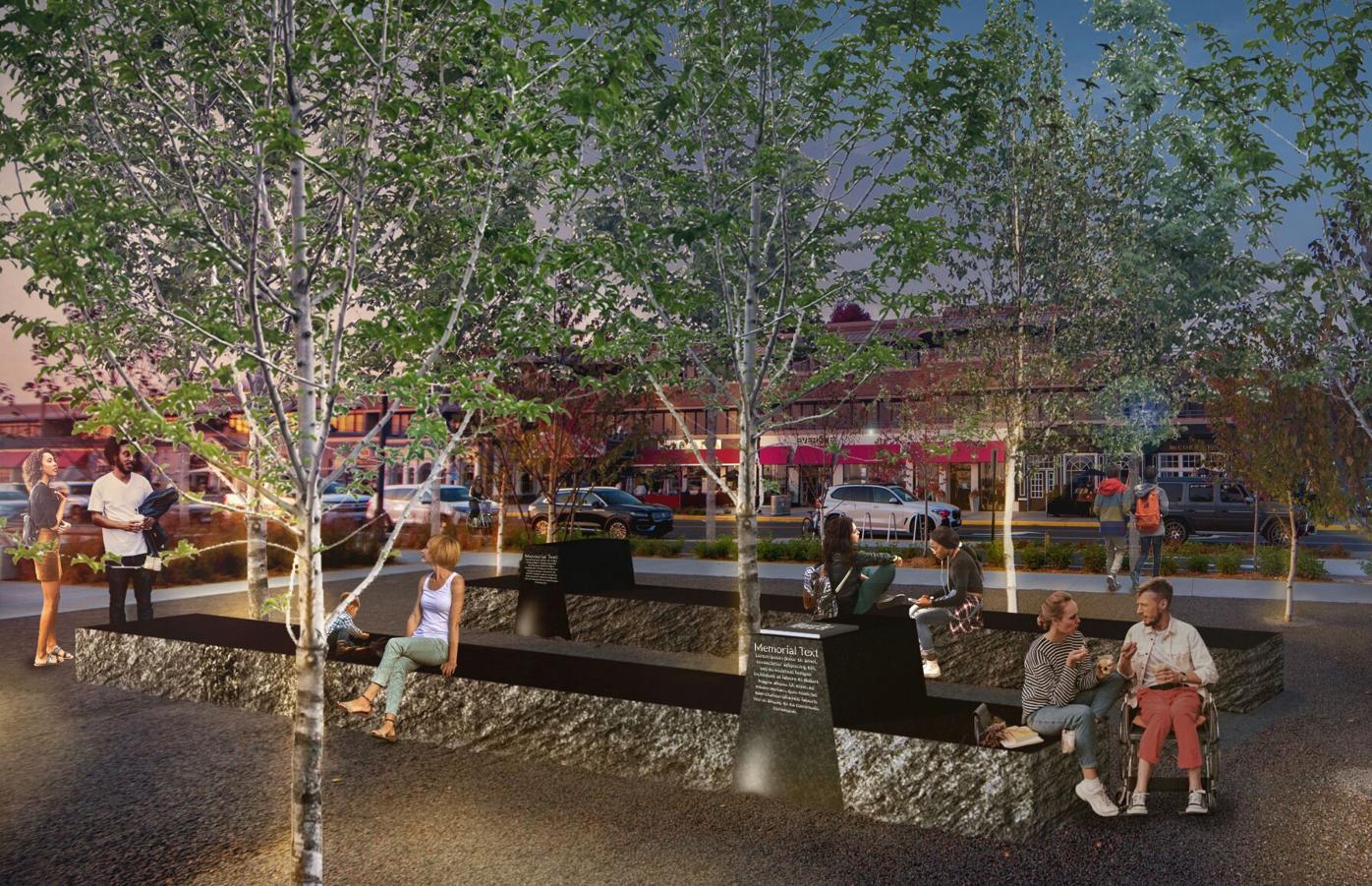 A 9/11 memorial will be located among a grove of birch trees in Wayzata’s recently completed lakeside Panoway park space. (Submitted design rendering) 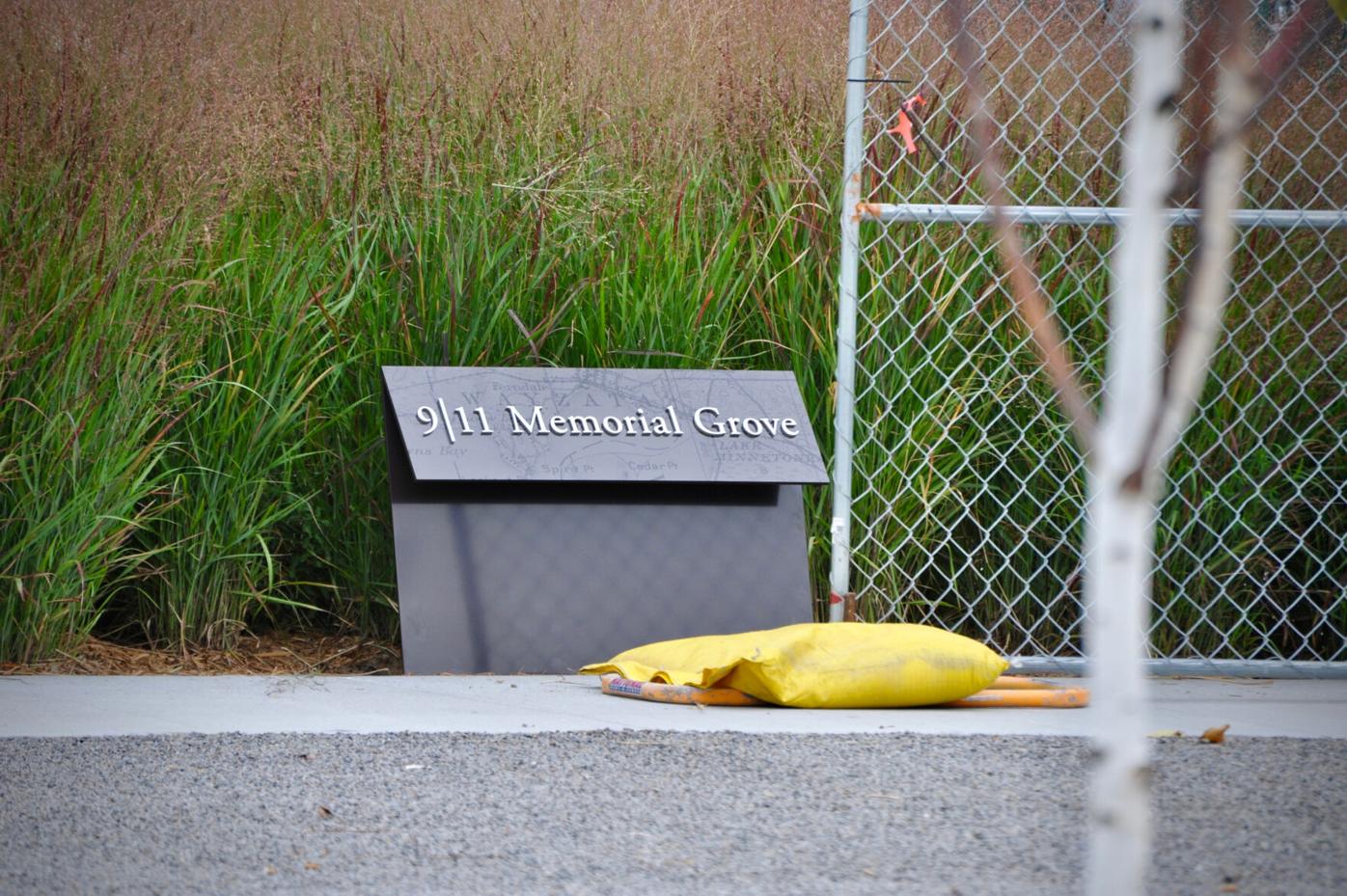 The city of Wayzata, in partnership with the Wayzata Conservancy, is preparing to unveil a 9/11 memorial with an event 10 a.m. Saturday, Sept. 11, near the intersection of Broadway Avenue and Lake Street. (Sun photo by Jason Jenkins) 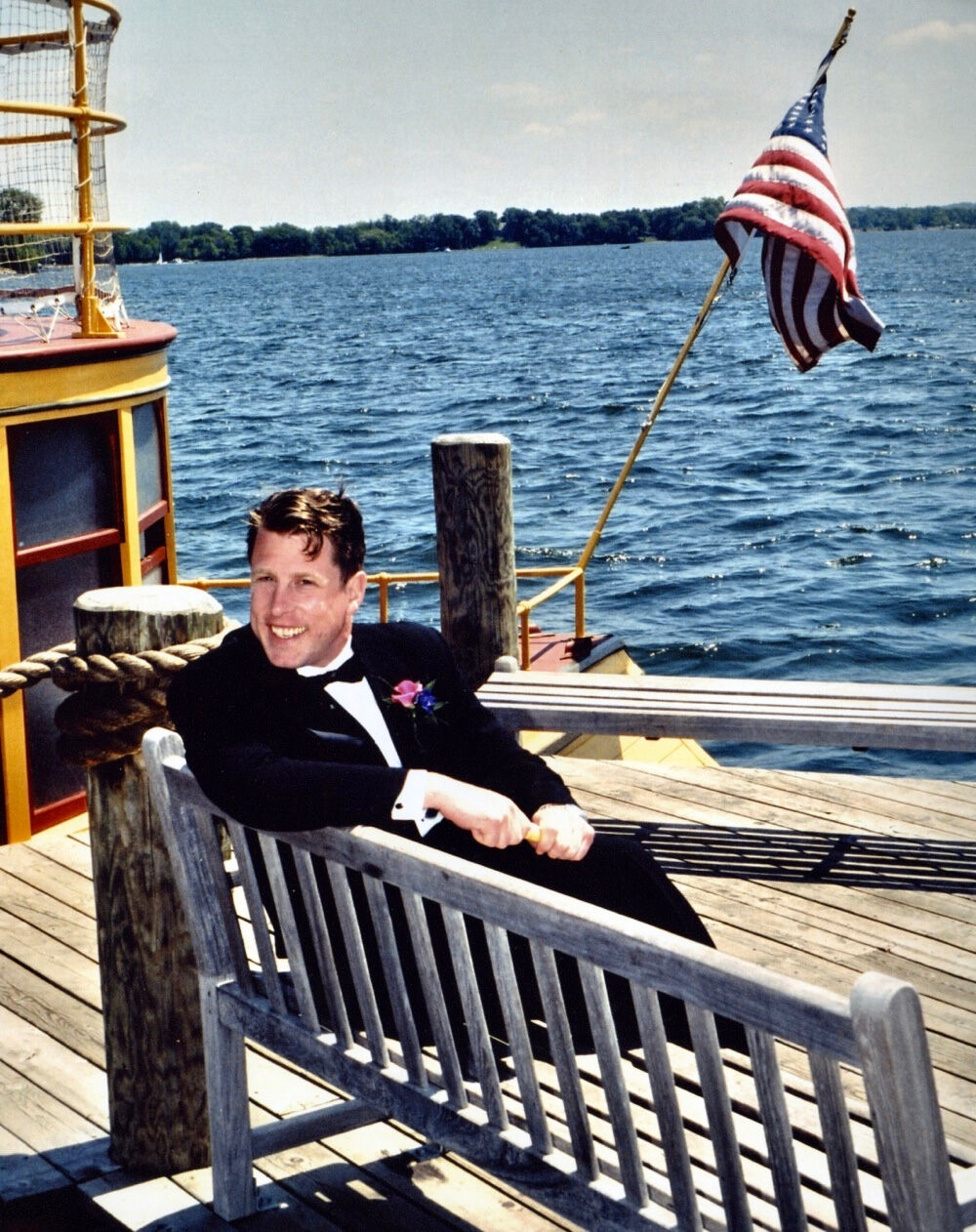 Opening aligns with the 20th anniversary of the attacks

A 9/11 memorial will soon become a permanent fixture in downtown Wayzata.

The memorial, located among a grove of birch trees in the new lakeside park space built within the city’s Panoway on Wayzata Bay initiative, is meant to serve as a quiet place of peace and reflection in honor of the lives lost and those impacted by the terrorist attacks 20 years ago.

The initial inspiration for the memorial dates back to 2011, around the time of the 10-year anniversary. The city of Wayzata was given several small pieces of the fallen World Trade Center buildings by the Aamoth family of Wayzata, whose 32-year-old son Gordy Aamoth Jr. died in the attacks.

In 2018, a group of community members asked that the city establish a memorial space near the corner of Superior Boulevard and Lake Street. From there, a committee was established to look into what a proper memorial might look like and where it should be located. The committee, led by Wayzata City Councilmember Alex Plechash, recommended that a 9/11 memorial be included in the plans for the Panoway project.

Wayzata, in partnership with the Wayzata Conservancy, is preparing to open the memorial with an unveiling during James J. Hill Days weekend. The event will be 10 a.m. Saturday, Sept.11, near the intersection of Broadway Avenue and Lake Street.

The 20th-anniversary event will include a ceremonial raising of a U.S. flag that was flown on a mission over Afghanistan in 2004 by Aamoth family friend Lt. Col. Stuart Howell of the U.S. Marine Corps.

The event will also include remarks from Wayzata Mayor Johanna Mouton and Michael O’Connell, the retired rector of the Aamoth’s home parish, the Basilica of St. Mary in Minneapolis. Also speaking at the event will be Minnesota Congressman Dean Phillips, who knew Gordy Aamoth Jr. as a classmate and friend.

“We will never forget the thousands of precious lives lost on that crisp Tuesday morning 20 years ago,” Phillips said. “I’m honored to play a small role in unveiling this memorial in Wayzata, which will serve as a solemn space for reflection and remembrance for all victims, including my childhood friend and high school classmate, Gordy Aamoth Jr..”

Erik Aamoth, Gordy Aamoth Jr.’s younger sibling by two years, remembers his brother as someone who was regularly the center of attention.

“He was the kind of person who walked into the room and everybody knew he was there,” he said.

New York City suited Gordy Aamoth Jr. well, Erik Aamoth said, and he enjoyed his job as an investment banker. The weekend before Sept. 11, 2001, Gordy Aamoth Jr. had come back to Minneapolis to wrap up work on a big merger deal. He then traveled back to New York for an announcement of the deal at the World Trade Center.

Two decades later, Erik Aamoth said he’s grateful to Wayzata for working to build a memorial that will honor all of the lives impacted on that day and in the months and years that followed - including the first responders, rescue crews and many volunteers.

“It’s important to remember not only what happened to Gordy, but all the people that were involved,” Erik Aamoth said. “I think Wayzata’s doing a really good job.”

The memorial design is a collaboration between Civitas, the urban design and landscape architecture firm that developed the Panoway plans, and Peter Aamoth, an associate of Minneapolis-based James Dayton Design and the youngest brother of Gordy Aamoth Jr.

The memorial features two 27-foot-long horizontal plinths meant to resemble the iconic silhouette cast by the twin towers on the New York City skyline. The granite plinths will also serve as benches for visitors. Several areas will have text and an enclosure will display several artifacts salvaged from the World Trade Center that were gifted to the city from the Aamoth family.

“We know that the small details spark big emotion. We made a point to not make the memorial a prescribed or scripted experience,” said Civitas Principal Scott Jordan. “It’s personal and emotional, and open in a way that allows each visitor to derive his or her own meaning. Each visitor can honor not only Gordy Aamoth Jr. but anyone who was impacted by 9/11.”

The Wayzata Conservancy is also working with the Minnetonka Center for the Arts for a public exhibit featuring video testimonials and the photography of Minnesotans Chris Kern, Dan Murphy and Lisa Poseley, who were in New York City on 9/11 and captured images of that day and how people came together in response.

The exhibit will be open to the public beginning 9 a.m. Friday, Sept. 10, and will run through Oct. 1 at Minnetonka Center for the Arts, 2240 North Shore Drive, Wayzata.

Photos and videos from the exhibit will later be available online, which will also be linked via a QR code at the memorial.

To learn more about the memorial and future installations under the Panoway initiative, visit wayzataconservancy.org/911mn.