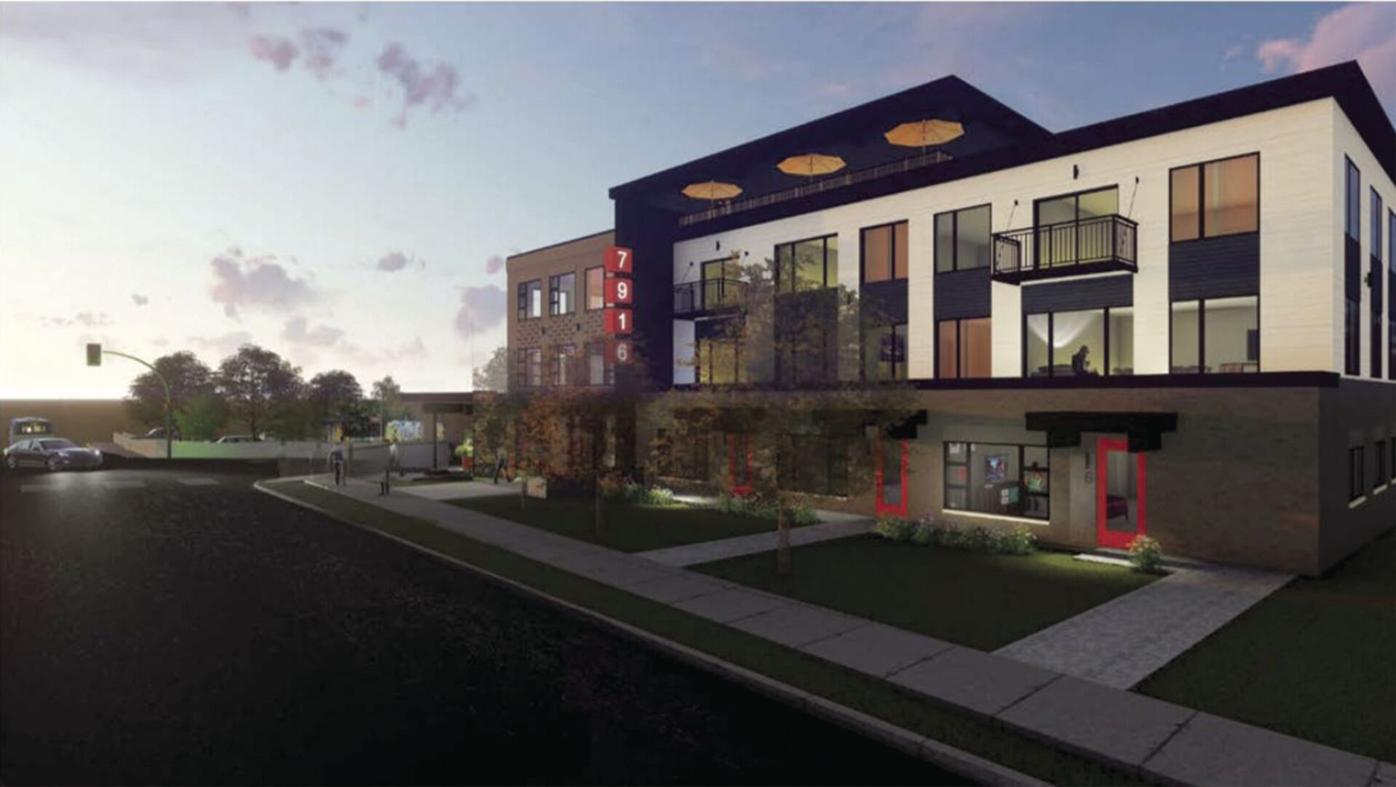 The main building for Texa-Tonka Apartments would contain three stories on its edge but would contain five stories further into the building. (Architectural rendering by DJR Architecture and Paster Development) 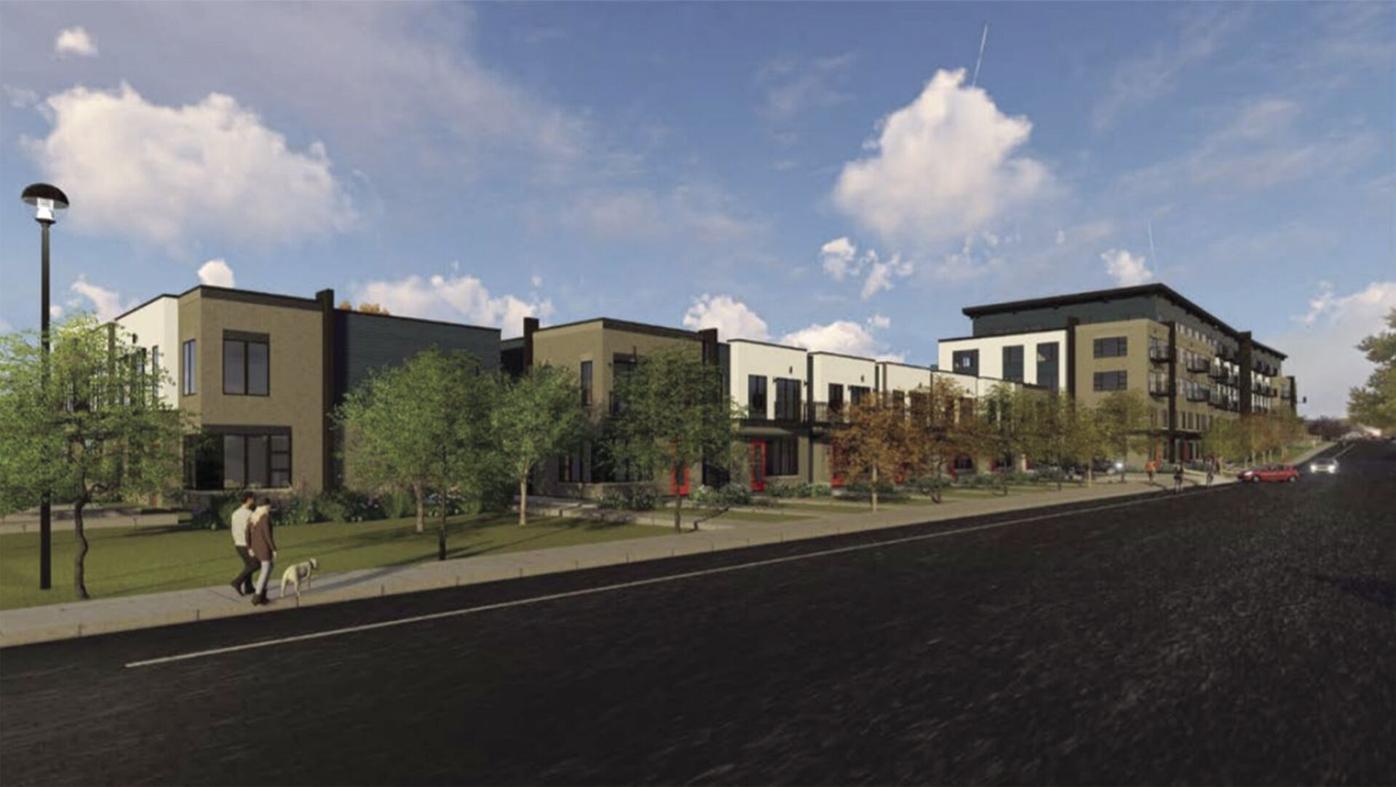 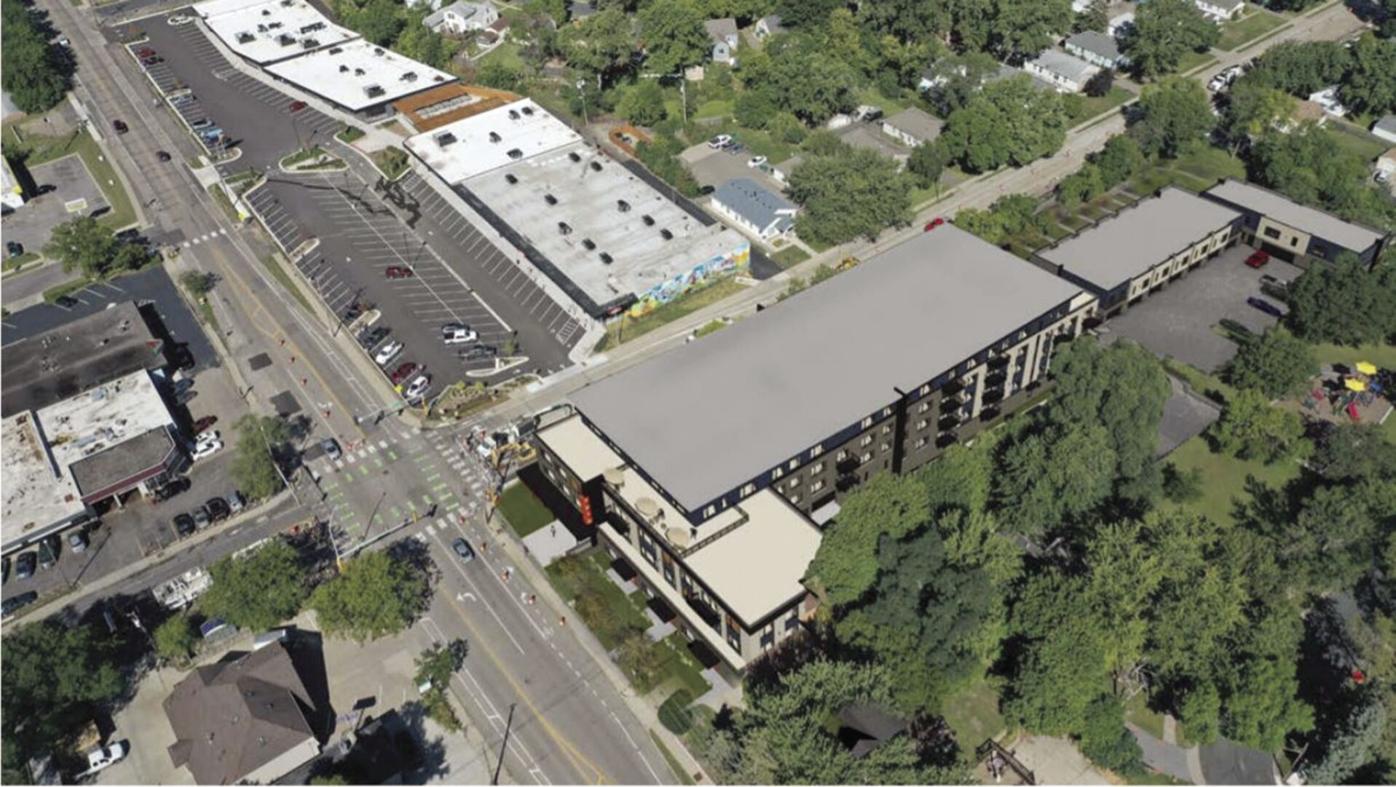 An aerial view of the Texa-Tonka Apartments plan shows its location along Minnetonka Boulevard and Texas Avenue, across from the Texa-Tonka Shopping Center. (Architectural rendering by DJR Architecture and Paster Development)

The main building for Texa-Tonka Apartments would contain three stories on its edge but would contain five stories further into the building. (Architectural rendering by DJR Architecture and Paster Development)

An aerial view of the Texa-Tonka Apartments plan shows its location along Minnetonka Boulevard and Texas Avenue, across from the Texa-Tonka Shopping Center. (Architectural rendering by DJR Architecture and Paster Development)

The Texa-Tonka Apartments redevelopment plan won praise from the St. Louis Park Planning Commission before moving on for a City Council vote.

The proposal includes 101 units in one building and 11 townhouses in another building northeast of the intersection of Texas Avenue and Minnetonka Boulevard. The main building would range from three stories to five stories while the smaller building would stand two stories tall, with all but one of the townhouses containing two bedrooms. Twenty percent of the units in the project would be reserved for households making up to half of the area median income.

A 2019 city traffic study based on more than twice as many units as currently proposed and more commercial operations in the area concluded that redevelopment would have little impact to the roadway operations, according to Senior Planner Jennifer Monson.

The site currently contains a vacant one-story building that would be removed and an unused parking lot. Because a gas station occupied the site in the past, cleanup of ground contamination would be necessary.

During a virtual neighborhood meeting last November, concerns arose about the height of the main building, with some speakers preferring a three-story maximum height and criticizing the traffic impact, lighting and architectural design. Concerns about access during construction also arose. However, some speakers said they supported the project and praised the developer, Paster Properties, for upgrades to the Texa-Tonka Shopping Center it owns across Texas Avenue. More individuals provided email in support of the project than opposed it in writing. Opposition in emails focused on the potential for overflow parking, building height, traffic, privacy, tax-related concerns and an objection to the number of apartments in St. Louis Park.

The St. Louis Park Economic Development Authority, made up of council members, is considering reimbursing the developer for up to $2.6 million in costs through tax-increment financing, in which new taxes generated by development are returned to the builder for a period. A city staff report anticipated that the period would last about 12 years, after which local governments would receive the full amount of new taxes generated by the project.

A public hearing experienced audio problems, leading City Council members to decide during a Jan. 11 study session to allow further input during a council meeting Jan. 19, after this edition went to press.

At the Planning Commission meeting, one caller worried about increased traffic and added noise while another indicated he believed the main building would tower over the neighborhood. A third caller also expressed an interest in a maximum three-level building with fewer units. Another caller had concerns that included privacy in her backyard, among other issues.

Although parking arose during the comments, Planning Commissioner Tom Weber said a presentation appeared to indicate that sufficient parking existed in the plan. The city code would require 134 spaces based on the number of bedrooms, and the plan provides 138 spaces in garages, a surface parking lot and through five on-street parking spaces.

“At this time, we don’t anticipate any overflow, off-site parking,” Monson said.

Commissioner Matt Eckholm, who lives near the project site, said he liked the plan.

He also appreciated the idea of having a stepped-back design that varies in the number of stories for the main building.

“I like the fact that it steps down two stories as it gets further into the neighborhood so it doesn’t feel like this giant, imposing block of a building,” Eckholm said.

People in some circles would hesitate to endorse any multi-family development on the site, he asserted.

“I think that there are people who wanted this to be single-family homes, and I don’t necessarily think that that’s a realistic thing to hope for,” Eckholm said.

While Weber said the city should consider turn lanes in the area, he said, “With thoughtfulness to that intersection, this development, I think, can fit in very nicely.”

Commissioner Jim Beneke added, “I am really impressed with this project, too. I think a lot of thought went into it, including the issue of the step-down, for instance, and how the appearance of the building will look.”

Chair Jessica Kraft acknowledged the plan differs somewhat from the city’s small area plan, which had anticipated a three-story, mixed-use building on the south side of the site. But Kraft said the design makes the main building appear less tall than it otherwise would look and said it would reactivate the corner while providing new housing options.

Kraft said, “Just the character of it seems to fit in with the development of the mall across the way.”