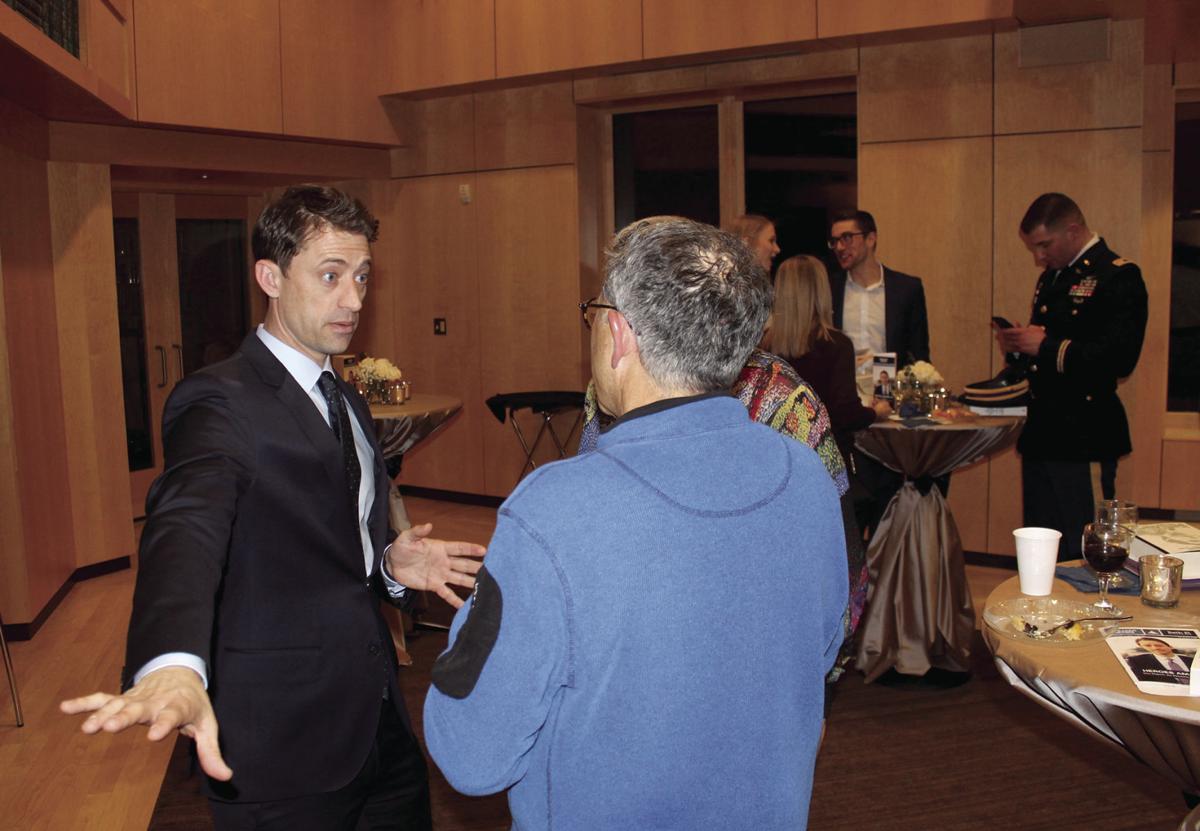 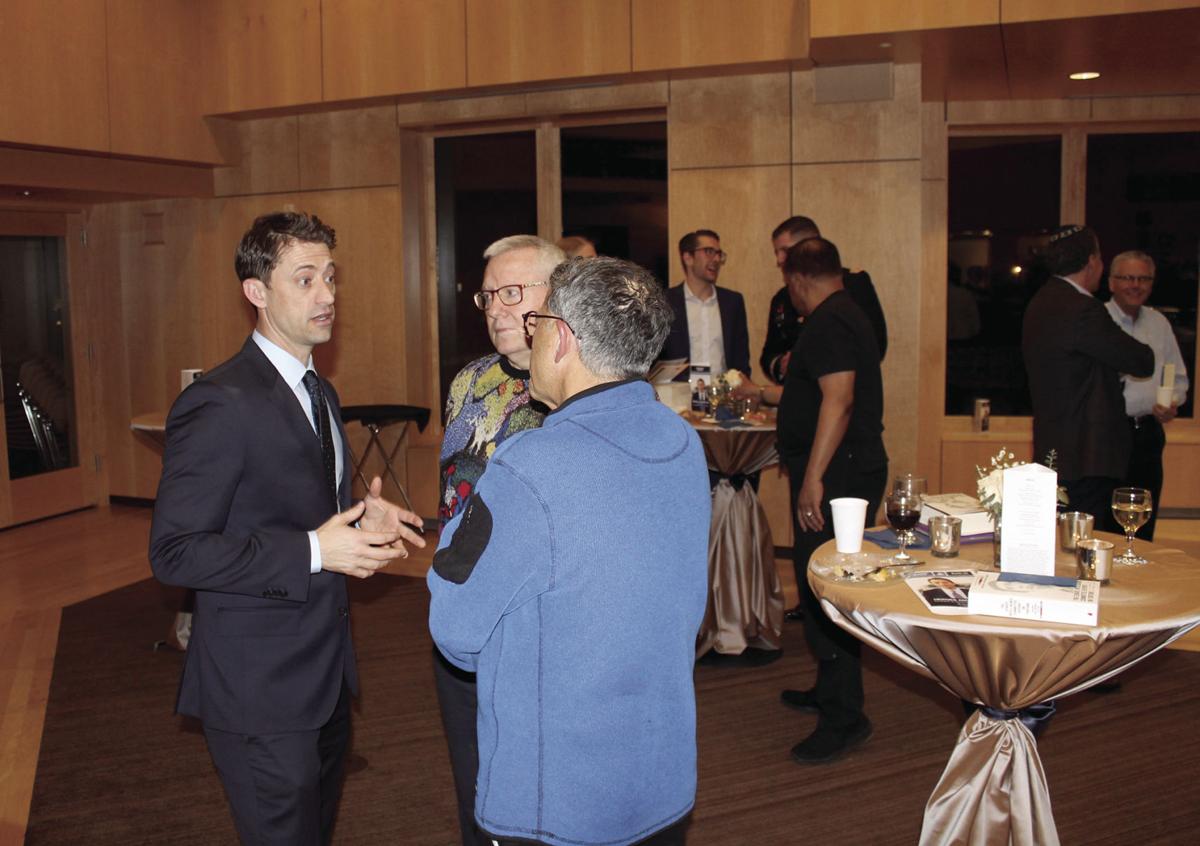 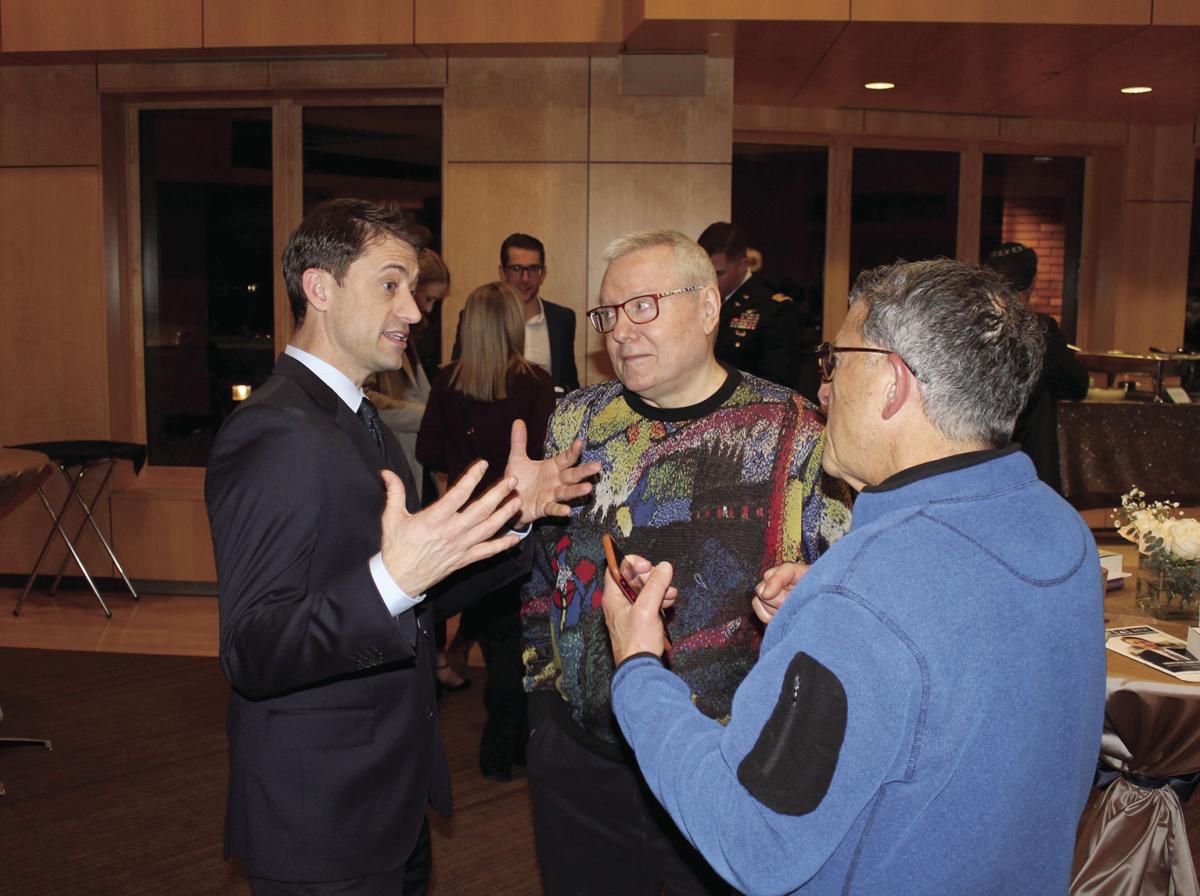 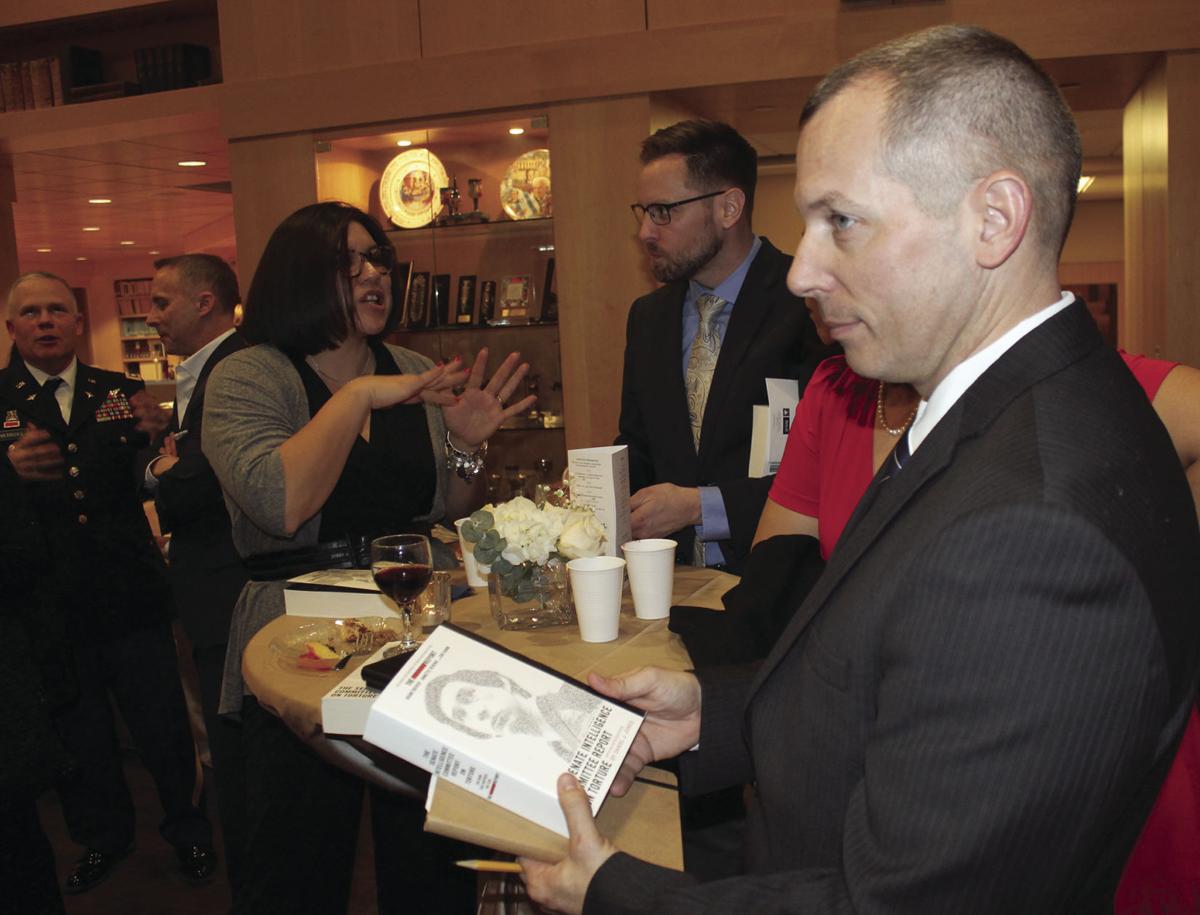 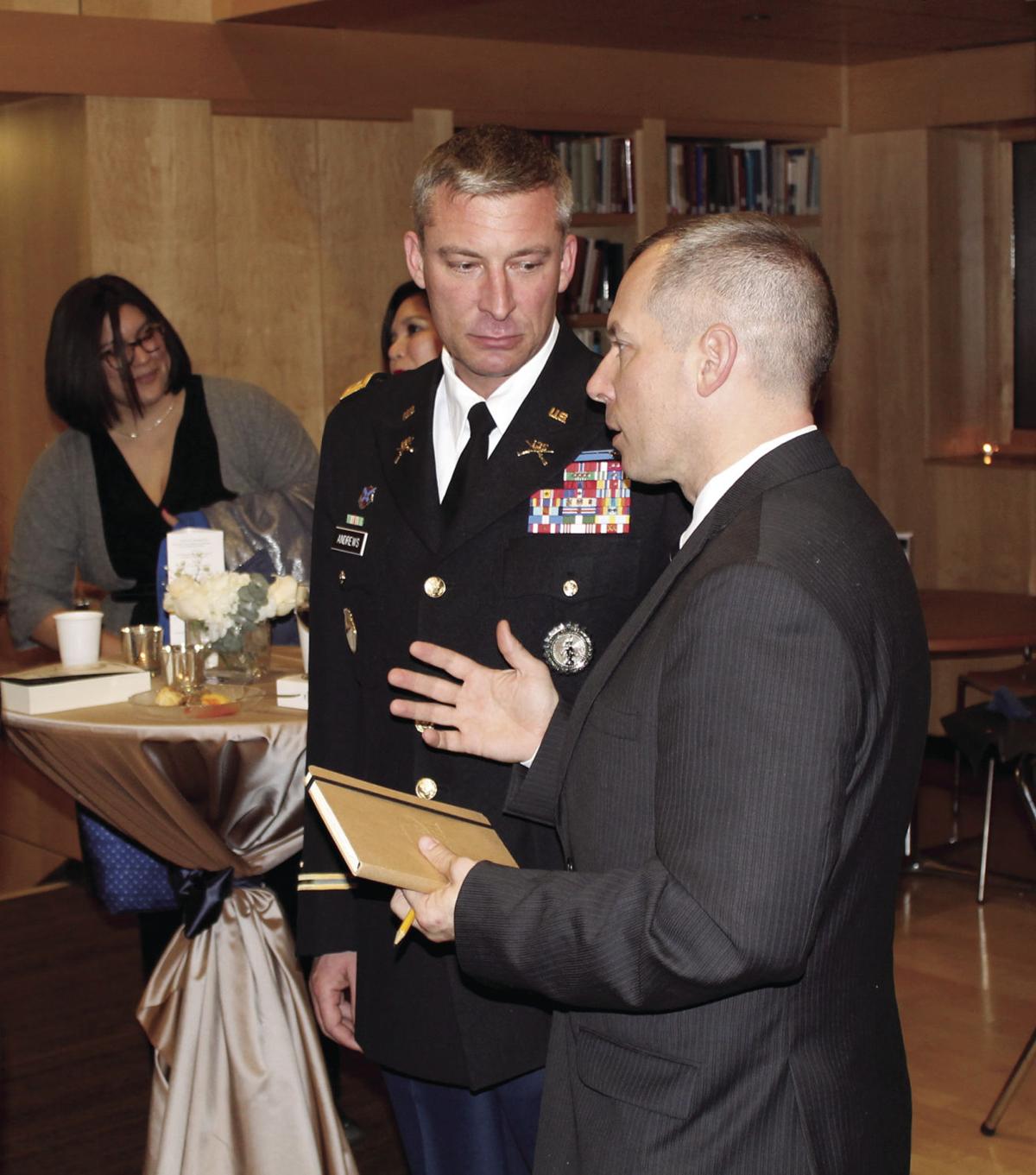 When Beth El Synagogue booked Daniel Jones, the author of “The Senate Intelligence Committee Report on Torture,” organizers did not know the United States would be embroiled in an escalated Middle Eastern conflict yet again.

“Who knew that when we scheduled this evening some time ago, the world across the ocean would be rattled by sabers and rockets and snipers and planes being shot down?” Rabbi Avi Olitzky said when introducing Jones Jan. 9 at the St. Louis Park synagogue.

Organizers also did not know “that we would be deeply supporting our soldiers uniquely in harm’s way” as the 34th Expeditionary Combat Aviation Brigade of the Minnesota National Guard that the synagogue supports has been deployed again.

During an event titled “Heroes Among Us: The Report: An Evening with Daniel Jones” that raised funds for the effort to support the National Guard members, Olitzky said, “Let us pray that we one day bear witness to a world when neither heroism nor torture have a role, that we one day see swords hammered into plowshares.”

“Some of our national security organizations do not take criticism well,” Jones told the Beth El Synagogue audience with a laugh.

His experience is dramatized in the movie “The Report,” in which Adam Driver stars as Jones.

Scott Burns, a Golden Valley native who wrote the script for “The Report” and directed and produced the film, provided a video introduction for the audience.

Burns, who wore a Twins hat in the video and joked that he knew better than to return to Minnesota in January, said he appreciated the theme of “Heroes Among Us.”

“I spent a lot of my career writing films about people who were liars,” said Burns, who has written screenplays for “The Bourne Ultimatum,” “The Informant!” and “Contagion.” “When I started this project with Daniel, I felt this was an opportunity to turn over a new leaf and tell a story about a real truth-teller who I think changed the course of the history of this country.”

Burns added, “As a storyteller, we look for great stories. And every once in a while you’re fortunate to find one of those.”

Jones said he appreciated the event’s focus on honoring those who served.

“That is important to me, coming from the government,” he said.

Although Burns had an obligation in New York, Jones said the filmmaker had been passionate about the Beth El event.

Although years have passed since Jones issued his lengthy report on torture, he said he believes the story is still relevant. The report has sold more copies since the release of the film than when it had issued originally.

“As much as it is about the torture program itself, it’s also about checks and balances and the separation of powers,” Jones said. “Right now we’re struggling with understanding those and executing those in a way that’s consistent with our Constitution. So, I think it has real relevance. I mean, Scott timed it pretty well.”

Burns meticulously fact-checked the movie, Jones said. He noted that Burns listed all his sources alongside the script in a document.

“It’s a pretty impressive document in and of itself,” he said of the sourcing.

Jones knows something about impressive documents. Researchers reviewed more than 6.3 million pages of classified documents when compiling the report, which he told the audience has not been shown to contain any errors.

He discussed his sources, such as members of the military and the federal government who tipped him off about memos and messages he should seek to find for his report.

Jones pointed out that the term “enhanced interrogation techniques” used as a euphemism for torture had been coined by the Gestapo in Nazi Germany. Supporters of the techniques claimed they were intended to save American lives, but he said his research found that information obtained through it was typically inaccurate and that the program did not lead to the capture of terrorists.

President George W. Bush had not been briefed on the program until April 2006, by which time about 90% of CIA detainees had already been through the program, Jones said. While Bush expressed immediate discomfort with the program at the briefing, in September 2006 he defended it in a speech, Jones said.

He also criticized President Barack Obama for not calling out intelligence officers who engaged in the techniques. Obama said in 2014, “We tortured some folks.” However, he also said, “It is important for us not to feel too sanctimonious in retrospect about the tough job those folks had. A lot of those folks were working hard under enormous pressure and are real patriots.”

Jones spent much of the speech contrasting people in the military and intelligence community who did report torture with people who knew but chose to stay silent because they worried about the impact on their careers. Indeed, he said some careers of people who spoke up did suffer while Gina Haspel, who had a role in destroying tapes containing evidence of torture, is now the director of the CIA.

No one faced prosecution after Jones’ report came out, but the McCain-Feinstein Anti-Torture Amendment later banned the torture of U.S. detainees and allows only interrogation techniques contained in the Army Field Manual.

While Jones said the United States is currently in an “accountability crisis” – pointing to individuals President Donald Trump pardoned who have been convicted or accused of war crimes – he expressed optimism that the federal legislation approved after his report would prevent torture in the future. He simultaneously advocated for more scrutiny.

Of the film, Jones said, “I certainly hope that the members (of Congress) and staff are inspired by it and do some robust oversight. It’s never more important than it is right now; that’s for sure.”

Olitzky said he hoped the event would help generate dialogue around a challenging conversation and encourage people to become engaged in helping change the world for the better.

He said, “That’s the reason we wanted to bring Daniel in, not only as a hero among us but also because the conversation is really about true heroism.”