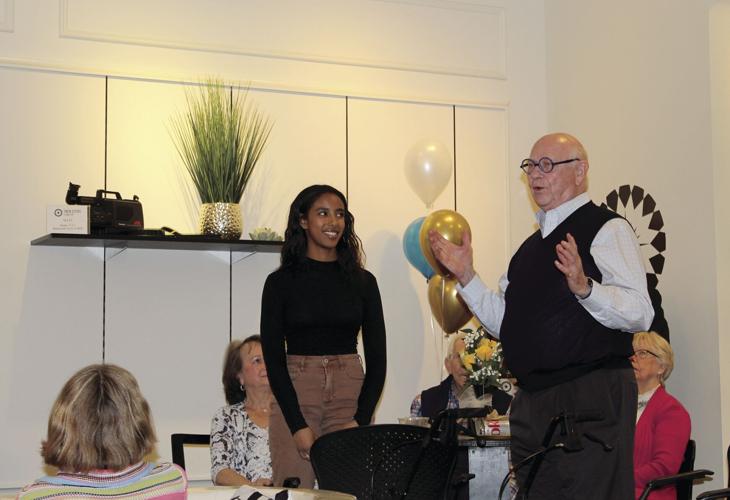 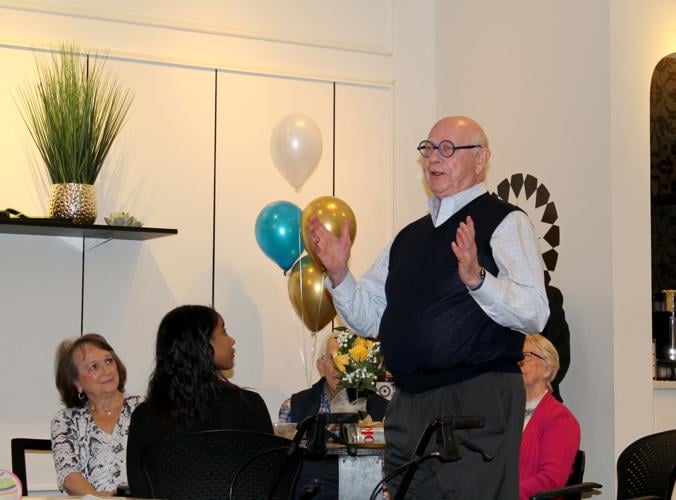 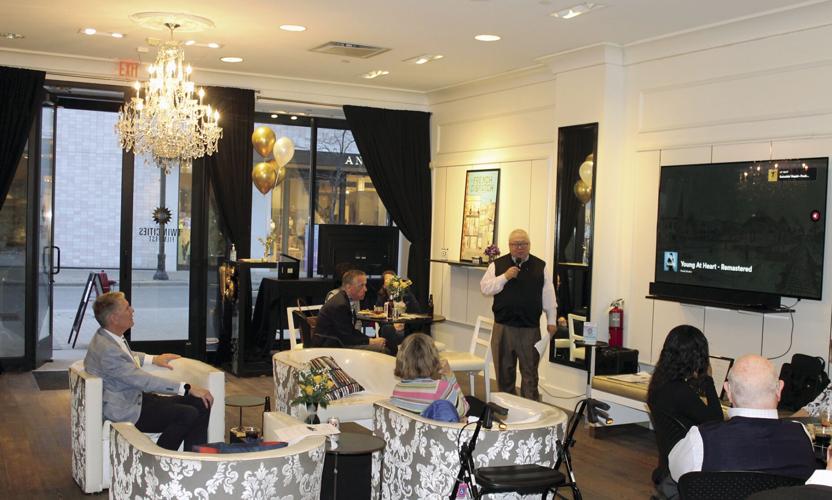 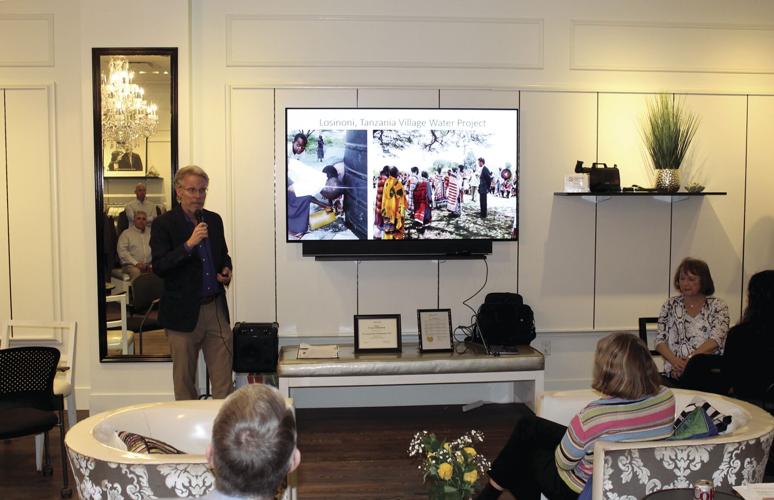 For about 3,900 weeks, the St. Louis Park Rotary Club has been gathering and plotting ways to make a difference in the community.

The club celebrated its 75th anniversary April 28 at the Twin Cities Film Fest lounge at The Shops at West End, mingling together over drinks, crab cakes, chicken, a cake marking the occasion and hors d’oeuvre.

Club President Derek Reise told the audience, “Rotary has changed a lot in the last three-quarters of a century – as has the world. We will continue to adapt on how we operate, but we will always stay true in our values and unite to create lasting change.”

At the event, the club recognized Ruth Erist, a St. Louis Park High School graduate who received a club scholarship to attend the University of Minnesota.

St. Louis Park Mayor Jake Spano issued a proclamation for the club that says it annually donates up to $40,000 for initiatives like Children First, the Parktacular festival, Westwood Hills Nature Center art installations, youth sports, scholarships and other endeavors.

“The St. Louis Park Rotary Club provides a place for neighbors, friends, and problem-solvers to share ideas, join leaders, and take action to better the community and create lasting change,” states the proclamation honoring the club’s continued existence since 1947.

Steve Solbrack, a former president of the club who is a charter member and director of the Twin Cities Rotary EcoClub, said he formed many fond memories as a young adult in the St. Louis Park Rotary Club in the early 1990s. He pointed to mentors who helped him as well as others travel for international service projects over the years in places like Nicaragua and Tanzania. In a project in a suburb of Bangkok, he and other members helped build what at the time had been the largest playground in Thailand, he recalled.

“I was able to pick up a little 6-year-old girl and bring her out on the playground and put her on the slide,” Solbrack recollected.

He described other club trips to Uganda and Honduras, where club members worked on a water and sanitation project over the course of three years. He recalled a village elder who said she had been praying for water that children in the community could drink without becoming ill and called the club’s efforts the answer to her prayers. Before the work, many community members walked kilometers at a time to obtain water from a river, often leading to sickness, Solbrack said.

Jim Brimeyer, a member who has served as a past St. Louis Park council member and city manager, noted he traveled to Ukraine in 2011 and made connections. A Rotary club member has conducted a fundraising campaign since war broke out in the country that has raised $110,000. On the day of the anniversary event, Brimeyer said the fund provided $5,000 to take care of 100 orphans in eastern Ukraine.

Closer to home, Solbrack described his favorite memory as a decade-long project in which the club gave a dictionary to every third-grader in the St. Louis Park School District.

“If you can just imagine half a day with all of that energy and all of that enthusiasm and high-fives from 300 third-graders, it was my favorite day in Rotary every year,” Solbrack said.

Rod Shilkrot, a long-time member who is currently on leave from the club but plans to return, said the club has experienced tough times over the years. The club had as many as 140 members before the St. Louis Park Sunrise Club formed its own organization.

“We’ve lost a lot of members, and we’ve gained a lot of new members,” he said.

Globally, the club has had a role in eradicating polio and other work, Shilkrot said. But the St. Louis Park Rotary Club launched a long-term local effort after an impassioned speech by former St. Louis Park School District Superintendent Carl Holmstrom to the club ignited a plan for Children First. The nonprofit seeks to build positive assets in youth.

Shilkrot recalled a Children First effort in which older citizens in a neighborhood accompanied kids to their bus stops every morning and afternoon. As a school bus driver currently, Shilkrot said he knows how important it is to help kids from getting “lost in the shuffle” and ensure that community members help them get to and from school safely.

The organization has also been involved with College Possible, which helps prepare low-income youth for college by providing coaching and support.

In the past, the club supported an exchange program in which international students stayed in the homes of members while St. Louis Park students traveled to other countries.

“It was a tremendous cultural learning experience for everybody involved,” Shilkrot said.

The club has also been involved with Can Do Canines, a New Hope-based group that provides service dogs to individuals with disabilities at no charge. Club member Elmer Schindel said inmates in Minnesota and Wisconsin help train the dogs.

“It changes the lives of the inmates,” Schindel added.

More broadly, speakers said the club has shown power through its outreach despite its relatively small size.

The St. Louis Park Rotary Club will host David Schultz, a Hamline University political science professor, on the impacts of redistricting at its usual meeting time of noon to 1 p.m. Monday, May 16, at Westwood Hills Nature Center, 8300 W. Franklin Ave. in St. Louis Park. Guests may bring their own lunch or request a complimentary boxed lunch by emailing Reise at derekreise@gmail.com by Thursday, May 12.

The St. Louis Sunrise Club will host Luis Versalles on Courageous Conversations and racial equity work 8:15-9:15 a.m. Friday, May 20, at the nature center.

Information about the Sunrise Club is available at slpsunriserotary.org.