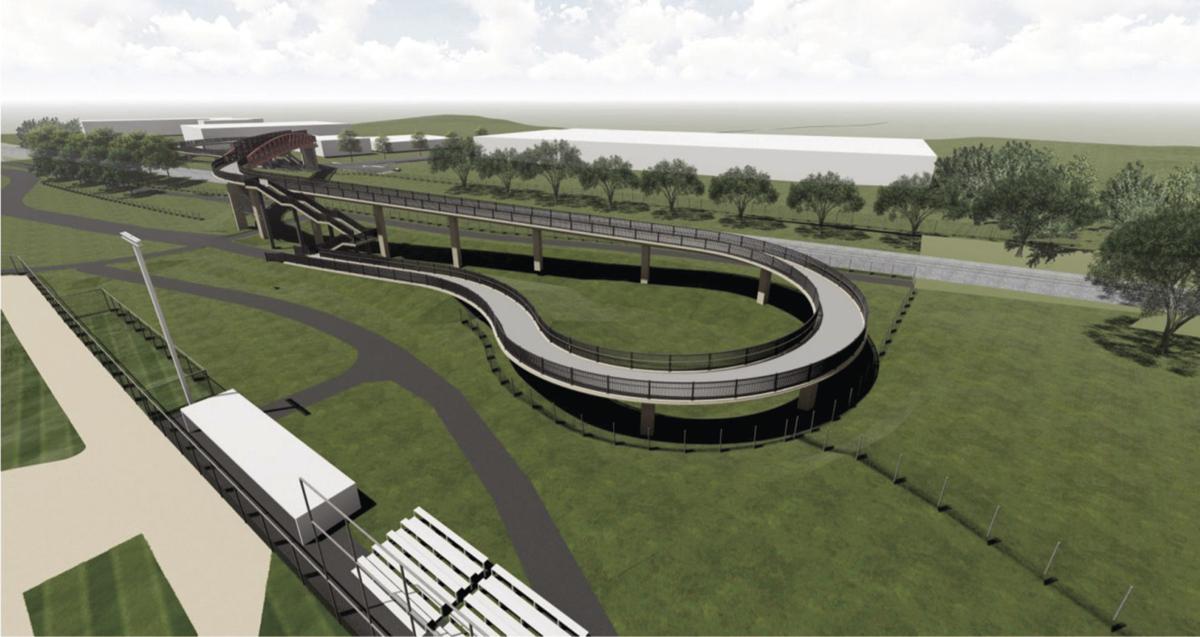 A rendering shows an overhead view of a bridge that has been proposed over the BNSF Railway tracks in St. Louis Park. (Submitted image) 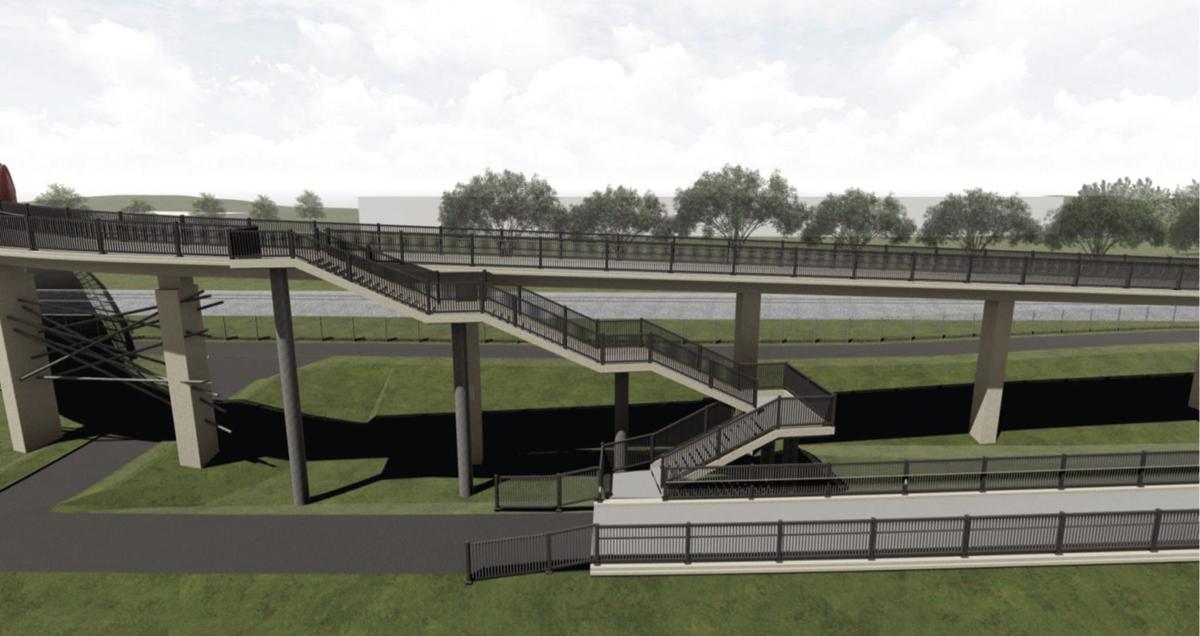 A proposed staircase on the south side of the bridge would allow pedestrians to descend without following a ramp for hundreds of feet. (Submitted image) 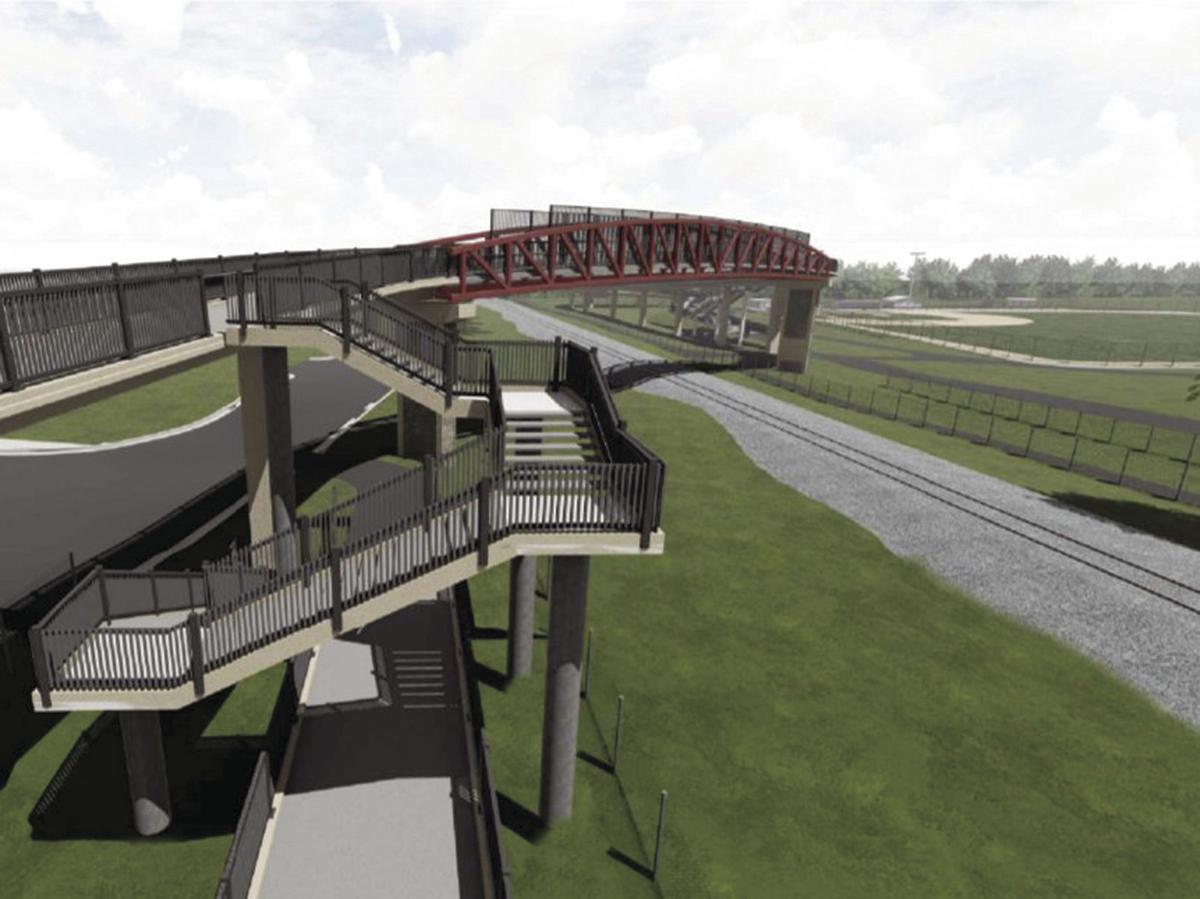 The north staircase would allow pedestrians to access a bridge over BNSF tracks in St. Louis Park. City staff recommended cutting the staircase due to the cost, but several council members voiced support for it.

A rendering shows an overhead view of a bridge that has been proposed over the BNSF Railway tracks in St. Louis Park. (Submitted image)

A proposed staircase on the south side of the bridge would allow pedestrians to descend without following a ramp for hundreds of feet. (Submitted image)

The north staircase would allow pedestrians to access a bridge over BNSF tracks in St. Louis Park. City staff recommended cutting the staircase due to the cost, but several council members voiced support for it.

St. Louis Park City Council members approved a bikeway and bridge with costs that have increased to an estimated $9.14 million, plus additional funds for public art.

The council voted unanimously March 16 to approve the final plans and authorize bidding documents for a bikeway that includes a bridge over BNSF Railway tracks, connecting Dakota Park to Edgewood Avenue. The project, called the Dakota North Bikeway and Bridge project, does not include a separate section of Dakota Avenue between 26th Street and Lake Street that the council is set to approve later this year.

The revised amount for the Dakota North project includes a higher total than estimated during a March 9 study session since a majority of the council supported staircases on each side of the bridge along with ramps. City staff members had recommended eliminating the north staircase, which has an estimated cost of $200,000.

“This is a 50-year infrastructure project, so both the staircases on either side are necessary to give pedestrians all they need, too,” Councilmember Tim Brausen said before the vote. “It’s an essential north-south link as part of our Connect the Park program. The residents in my ward have been calling for this for years.”

Councilmember Margaret Rog added, “I believe it’ll change how we get around the city, where we go and what we do, connecting a busy park and ball fields and a school to north neighborhoods and the West End. I think it’s important. As long as I can remember, people in my area have been confounded by the lack of access.”

She noted that she has witnessed people climbing and cutting fences and carrying bikes across the tracks.

Rog said she is “also aware that it’s really expensive,” but she said she does not believe the city could build it for significantly less cost.

“This is not a fancy bridge,” Rog said. “It’s pretty basic.”

Council members lowered the total cost of the project somewhat by removing stainless steel “gateway art,” thus also allowing for smaller concrete bridge piers than would have been needed to support the art. The council kept student art and decorative concrete by an artist who is a member of the Sisseton Wahpeton Oyate in the project.

Rog made a successful motion to add $80,000 from the city’s lodging tax for additional public art.

“I feel as if what is being proposed for the current art and some expansion on that is completely in line with our strategic priorities and what we want to do as a community in terms of celebrating our youth and celebrating people of color and indigenous cultures,” Rog said.

Councilmember Anne Mavity suggested that the city should approve “up to $80,000” for the additional public art since there is not a specific plan for how to use the funds. She made the suggestion “in light of everything we’re facing right now in terms of the economic tsunami that’s about to fall upon us, and just having as much flexibility as possible.”

Rog responded that she believed the amount is relatively small.

“If this were more money, it would make sense to me to add a lot of caveats and not commit fully,” Rog said.

Councilmember Nadia Mohamed agreed, “Compared to what we spend in the city, I think this is a reasonable ask.”

While Mohamed said she realized the city is in a state of emergency, she said, “At the same time, I don’t want to let this go for the fear that it might not come back to us.”

Most council members agreed, with all members eventually voting in support of Rog’s motion that included the extra art funding.

Councilmember Larry Kraft expressed concern about the increase in the overall cost for the bikeway.

The total far exceeds the $8.24 million estimate provided when the council approved the layout last year and the $8.3 million that the city had budgeted previously for the project.

“I see the value of this but how much of an increase is too much?” Kraft said. “I don’t have really a good sense of how to answer that question.”

Nevertheless, he said he would support it because federal funds will pay for about $2.9 million of the project total and because of the lack of north-south connections in the city. The project will enable students to walk or bike to Peter Hobart Elementary School and St. Louis Park High School and for pedestrians and bicyclists to reach the West End and ball fields, he added.

Much of the unexpected costs for the project relate to poor, contaminated soils. The city managed to save some money by creating temporary construction easements for the bridge project rather than buying land permanently.

Rog asked city staff if the city had an opportunity to perform city borings for projects earlier in the planning process “so we have a better sense of what the overall cost will be.”

However, he said city staff members could look into spending additional funds earlier on soil boring and other investigation to potentially prevent cost changes later on in projects.

Sullivan acknowledged, “On a project like this, this would have been a very helpful scenario.”