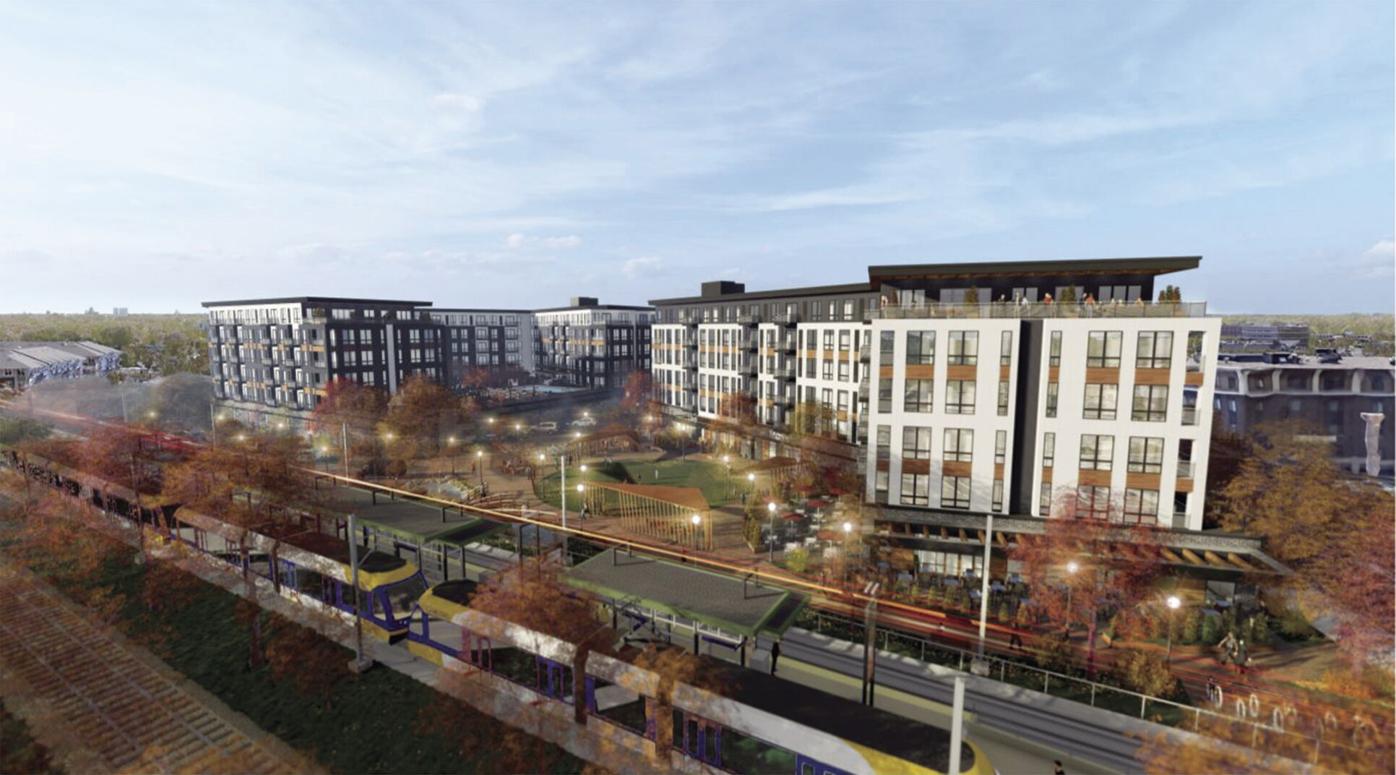 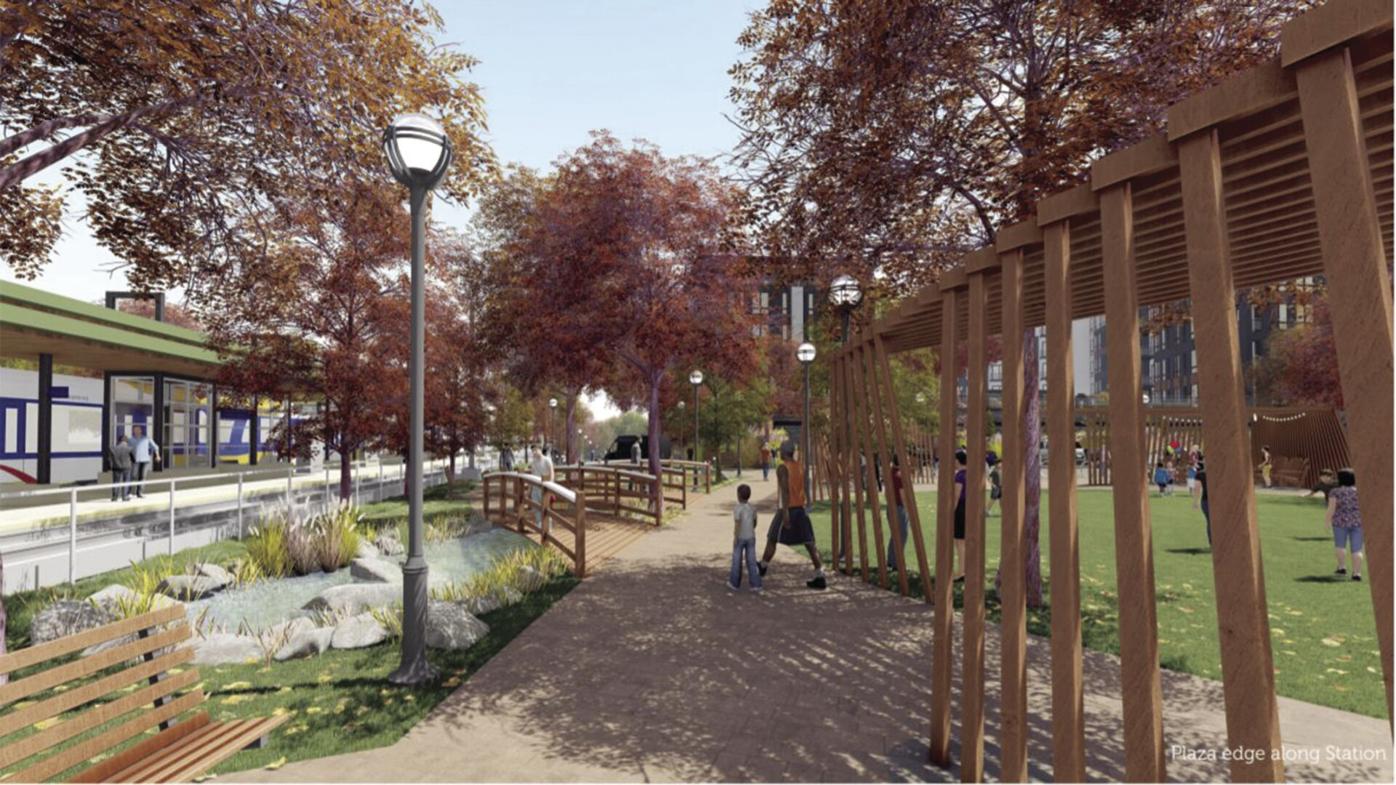 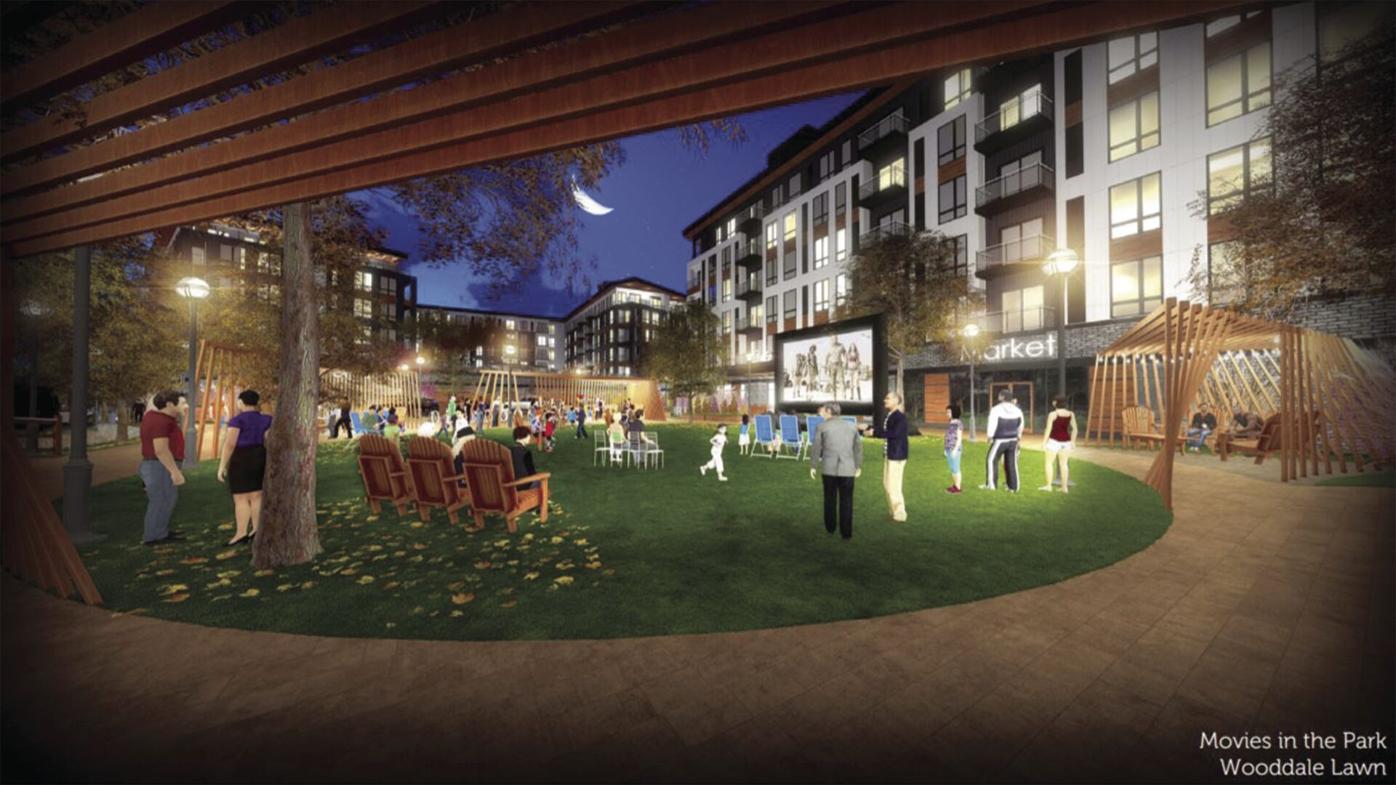 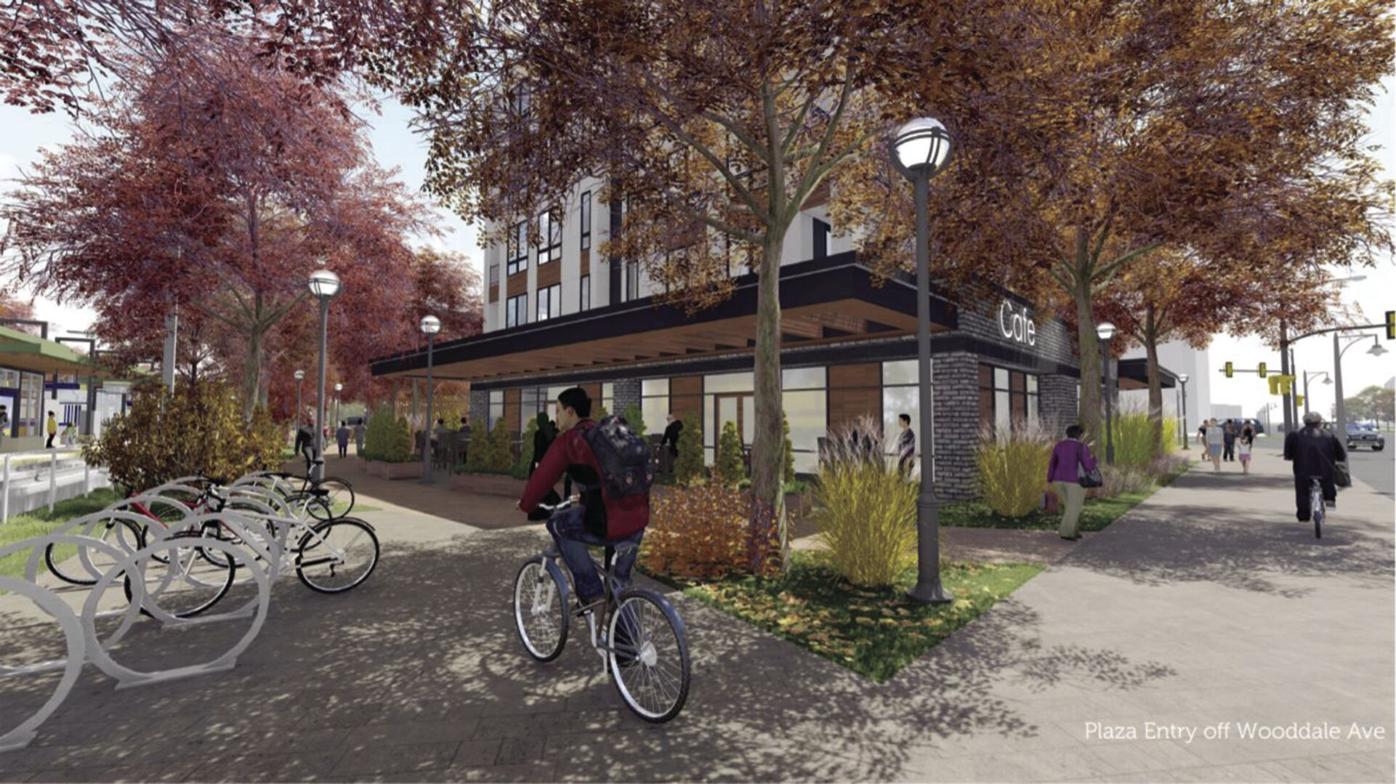 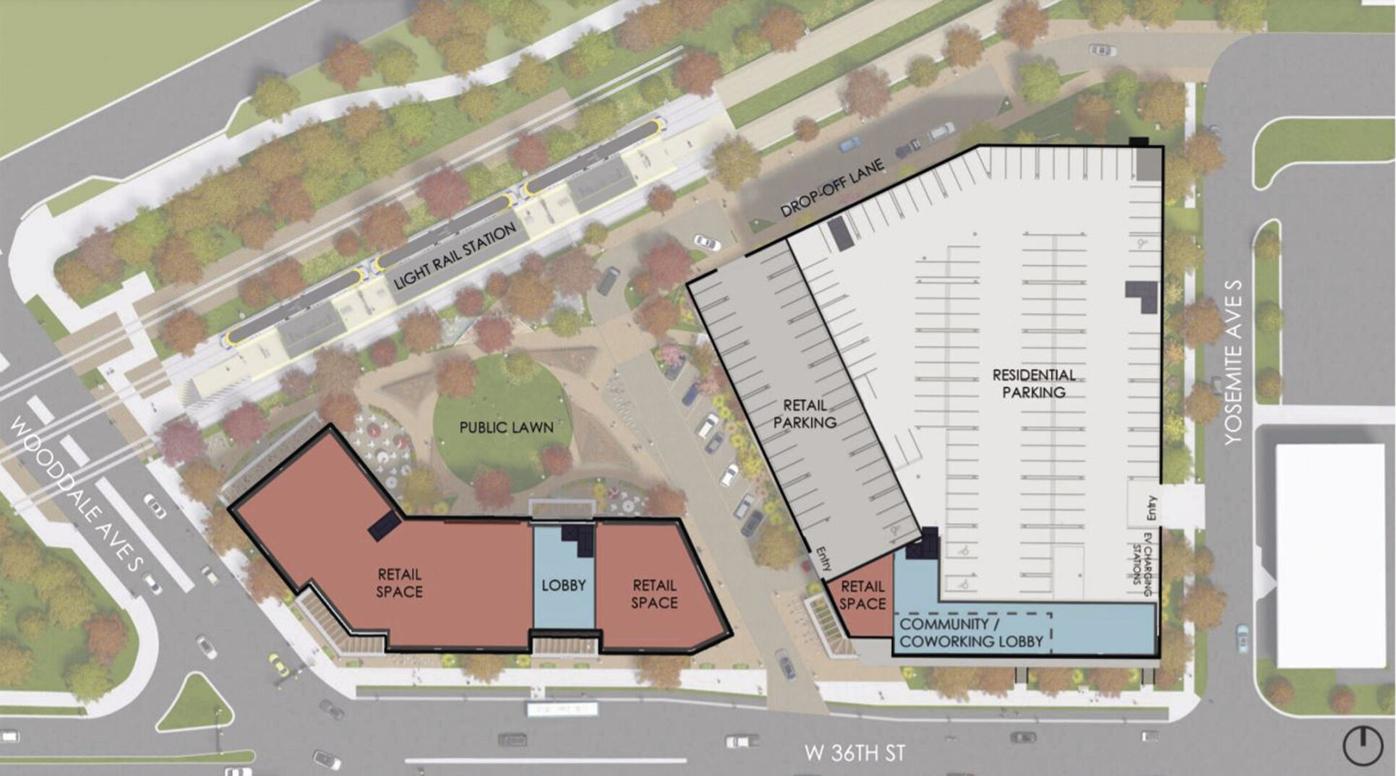 A pair of six-story buildings would flank the south side of the planned Wooddale Station in St. Louis Park under a plan that won backing from city staff.

Seven development teams made proposals for the area north of West 36th Street and east of Wooddale Avenue. Two St. Louis Park companies, Saturday Properties and Anderson Companies, presented a plan together for a mixed-use building with 86 residential units on property owned by the city that contains a vacant commercial building and a municipal parking lot. The teams would build another mixed-use building with 197 units on property to the east owned by Standal Properties that contains a one-story commercial building and a parking lot.

Twenty percent of the units would be restricted to affordable rent levels, according to a Nov. 23 city staff report.

A 25,000-square-foot public plaza next to the light rail station would accommodate public gatherings and social events, according to a project description. Two spaces on the top floor would overlook the area around the station.

Minneapolis-based Aeon had also proposed two six-story buildings with a total of 146 apartments, all of which would have been affordable, and a smaller amount of commercial space. Central green space and a walkway from the station to a center courtyard had been proposed. The developer had offered $1.5 million for the city property with a development cost estimate of $44.5 million.

St. Paul-based Crowe Companies had suggested a single building that would have stood as high as seven stories with rooftop amenities, a small courtyard and a pollinator park near the station. The building would have included 205 housing units, including some rowhomes. About 10% would have been considered affordable. Commercial space had also been proposed. The developer offered $2.5 million for the city property to accommodate the nearly $53 million plan.

Minneapolis-based Schafer Richardson had offered a six-story, U-shaped building with 164 affordable housing units and commercial space on the city property, with an offer of $1.6 million for the land. A public plaza along Wooddale Avenue and a courtyard for residents had been proposed as part of the nearly $44 million plan.

Minneapolis-based Solhem had proposed a five-story, U-shaped building on the city land with 178 residential units, 13% of which would have been considered affordable. A small, separate retail building would have been added near the station platform, with other commercial space facing streets. A small public plaza, rain gardens near the station area and a private courtyard had been proposed as part of the $42 million plan. Solhem offered $3.6 million for the city land.

Minneapolis-based United Properties proposed a five-story, T-shaped building on the city property. The building would have contained 89 residential units, 30% of which would have been affordable. Multiple commercial spaces had been planned along with a community room, a large public plaza and a small private courtyard. The plan had a $26 million price tag, including an offer of $1.5 million for the city land.

Minneapolis-based Wellington Management planned a six-story building and a five-story building on the city site, with all 225 apartments considered affordable. A large public plaza between the buildings and a walkway from West 36th Street to the station had been envisioned as part of the $55 million proposal, which included an offer of $2.5 million for the city land.

Seven city staff members and a representative from the city’s financial advisor, Ehlers, scored the plans based on factors like economic impact, community benefits, racial equity and inclusion, sustainability and the development team’s abilities and experience.

“The development team has an established track record of racial equity and inclusion as evidenced in the diverse team,” the staff members concluded of the winning proposal.

The plan would exceed the city’s Green Building Policy requirements and would include solar panels on the rooftops, the team members noted. They also liked the idea of combining two properties “to create a more spacious site design that facilitates a truly mixed-use, mixed-income, transit-oriented development with comfortable and welcoming public spaces.”

The staff team added, “By spreading the development across both properties, it reduces the density of the block and creates (more) efficiencies than if both parcels were developed separately.”

The plan would provide a broad range of housing and a large amount of commercial space, and a public plaza could feature concerts, movie nights and yoga. Wide sidewalks would allow station users to stroll around and through the site, according to city staff. The plans could accommodate possible off-street bike facilities on West 36th Street.

“In summary, the development team is proposing a transformative redevelopment for the Elmwood neighborhood and is ‘committed to providing a project that the city will view as a model for mixed-use, mixed-income, transit-oriented development’ as well as ‘a showcase for environmental sustainability,’” city staff wrote.

Staff recommended that the development team discuss the proposal with council members at a study session Monday, Dec. 14. If council members like the plan, they could work on a preliminary development contract between the companies and the city’s Economic Development Authority.

The most-read stories for St. Louis Park in 2020 included a protest on behalf of George Floyd, a complaint about a former council member relat…