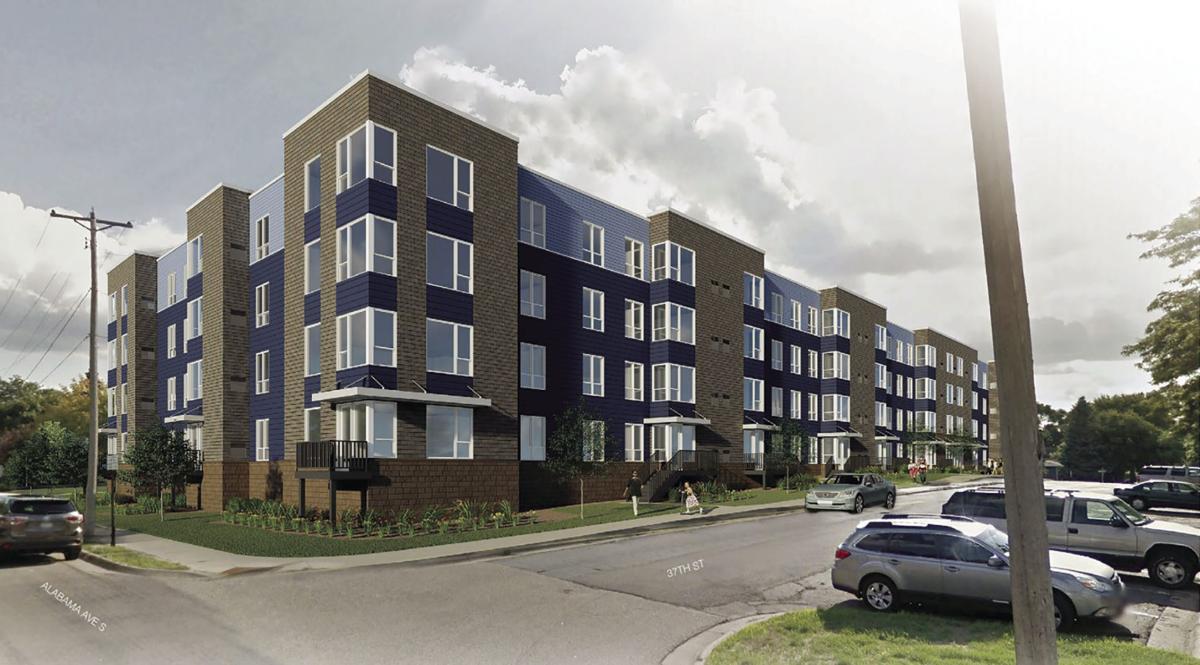 An architectural rendering depicts a planned affordable housing project at Alabama Avenue and West 37th Street on land owned by Union Congregational Church in St. Louis Park. (Rendering by UrbanWorks and Project for Pride in Living) 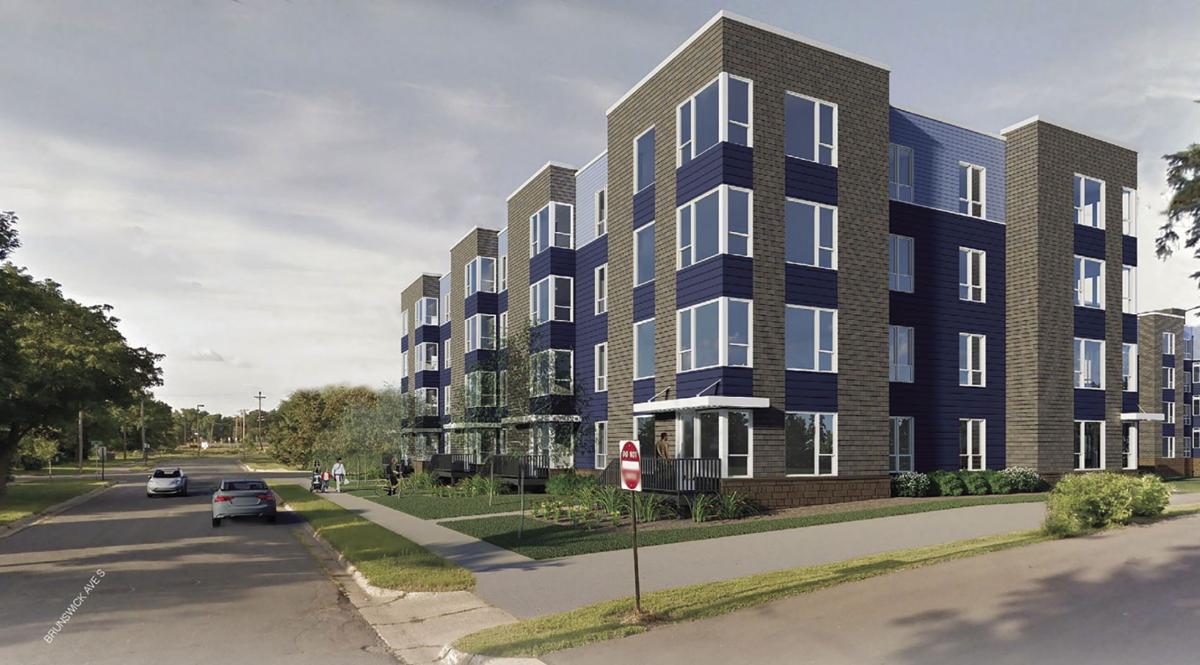 An architectural rendering depicts a planned affordable housing project at Brunswick Avenue in St. Louis Park. (Rendering by UrbanWorks and Project for Pride in Living) 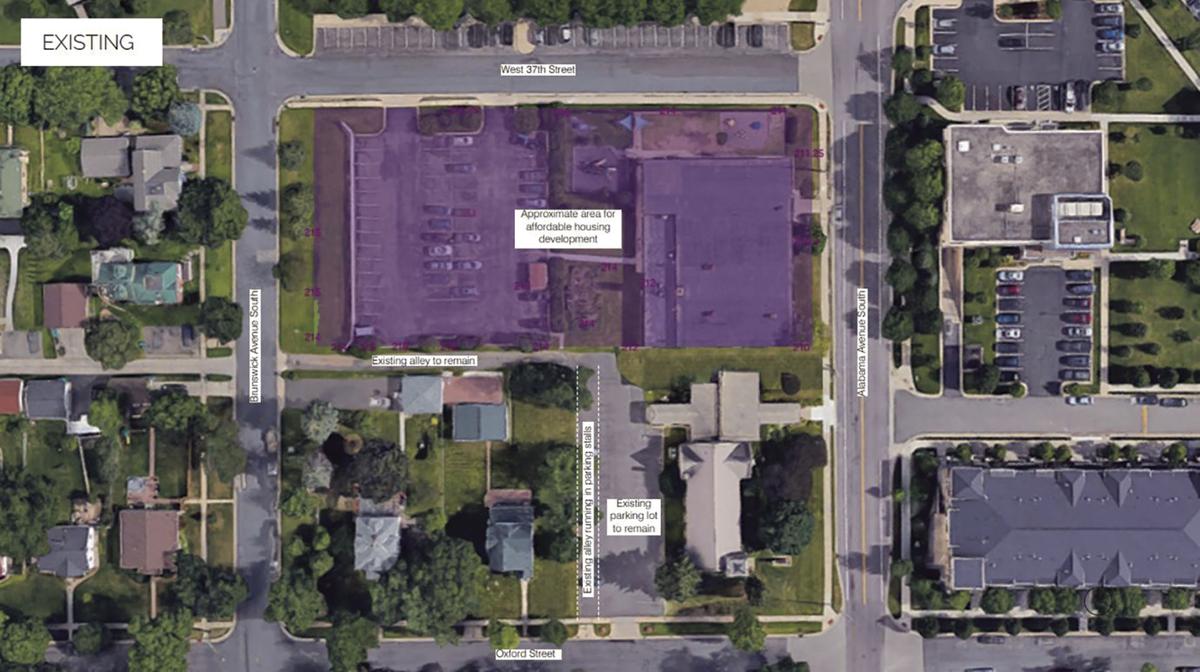 A map shows the area of Union Congregational Church property that would be redeveloped into affordable housing. (Map by UrbanWorks and Project for Pride in Living) 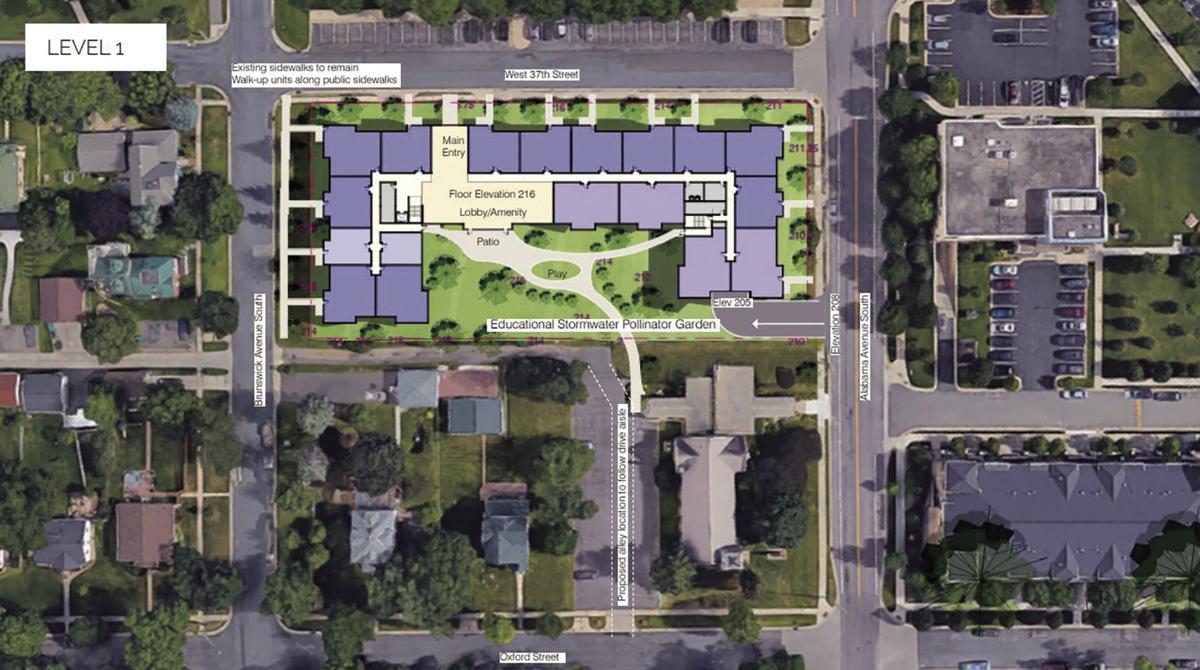 Plans show the footprint of a planned affordable housing unit. (Map by UrbanWorks and Project for Pride in Living)

An architectural rendering depicts a planned affordable housing project at Alabama Avenue and West 37th Street on land owned by Union Congregational Church in St. Louis Park. (Rendering by UrbanWorks and Project for Pride in Living)

An architectural rendering depicts a planned affordable housing project at Brunswick Avenue in St. Louis Park. (Rendering by UrbanWorks and Project for Pride in Living)

A map shows the area of Union Congregational Church property that would be redeveloped into affordable housing. (Map by UrbanWorks and Project for Pride in Living)

Plans show the footprint of a planned affordable housing unit. (Map by UrbanWorks and Project for Pride in Living)

With support for affordable housing making up part of its mission, Union Congregational Church has decided to work with nonprofit developer Project for Pride in Living to provide 80 such units on property owned by the congregation.

The St. Louis Park church would maintain the building that contains its sanctuary on the southern part of the site but would sell a northern section that currently is home to the Kid Zone Early Learning Center and a parking lot to PPL. The nonprofit would build a four-story building that it would manage long-term. The new building at 6027 W. 37th St. would include a mix of unit sizes, from studios to three-bedroom units.

Like many mainline churches across the country, Union Congregational Church has experienced declines in membership and funding, the Rev. Barbara Martin told St. Louis Park City Council members at a Jan. 13 study session.

“We have more property than we need,” Martin said.

The plan would help the church save money on its facilities and allow it to update the building it would retain, she said.

Chris Wilson, PPL’s senior director of real estate development, acknowledged to council members that he heard concerns from neighbors “loud and clear” at a neighborhood meeting.

Neighbors are concerned about traffic, with additional cars and people in the area. Wilson said planners would study the issue to ensure the project would not add unduly to traffic. He said generally residents at PPL developments tend to own fewer cars than residents at market-rate apartment buildings. Additionally, he said the project is close to a planned light rail station, at Wooddale Avenue. The building would contain a place for residents to park and repair bicycles.

“We’re trying to steer people away from cars,” Wilson said. “That said, some people will drive.”

A city staff report indicated that the developer could seek a reduction in the level of required parking on the site. Wilson indicated his organization would seek 80 parking spots, or one per unit. He also pointed to parking available on nearby streets, although Councilmember Rachel Harris cautioned, “You can’t always count on that parking being available because when we have snowfall we require it to be cleared quickly, which requires cars to be moved.”

However, Councilmember Anne Mavity said she believed one parking space per apartment for the on-site lot “feels very appropriate.”

Plans indicate that 74 parking stalls would be located in an enclosed space below the building. Mayor Jake Spano advised designers to move a parking entrance to 37th Avenue from Alabama Avenue, which he described as relatively busy.

Some neighbors also expressed concern about a four-story building, parts of which would stand next to single-family housing.

“I think we’re going to work on the architecture to try to soften that up and make that edge a little more pleasant,” Wilson said.

Harris suggested a design that would look more like townhouses near the single-family homes.

“With four stories adjacent to residents, I can see how there would be some trepidation,” Harris said.

Overall, she said the project would have a “tremendous impact for our community” that could benefit everyone from young people to the elderly or anyone in transition in life.

“I don’t think we can have enough housing of what you’re proposing,” Harris said.

The project would fit with council goals like equity and lowering environmental impacts, Wilson said. Many residents of PPL projects, and more than half its staff, are people of color. The building would significantly exceed the minimum standards of the Minnesota Green Communities Initiative. Environmental aspects of the building would help residents, as well, he added.

“If electric bills are lower, it’s better for them,” Wilson said. “It’s more sustainable, as well as saving the planet, which is a really great thing.”

An educational stormwater pollinator garden has been proposed in a yard along with a patio and play area.

The building would meet a city goal of providing a wide range of housing both in terms of size and income levels, Wilson asserted. It meets a city goal to promote transit options given its location near a light rail station and promotion of biking in a walkable area, and the building would contain a community space people in the neighborhood could use.

Mavity, who disclosed she has worked as a consultant for a PPL project in Minneapolis in the past but is not currently working with the organization, said she appreciated that the congregation is leading on the issue of affordable housing.

“Especially now that Southwest LRT is under construction, we’ll continue to see the pressures that housing developers are hungry for land and sites in St. Louis Park,” Mavity said.

The city needs housing of all kinds, but many of the offers have been on the high end of the market, she said.

“In that spirit, can we get creative?” she asked.

Martin said the church would like to provide art and exhibitions inside the new building.

Councilmember Larry Kraft asked if the building could be zero-energy given plans for solar panels on the roof. With zero-energy buildings, renewable sources on the site provide the equivalent of all energy needed at the facility.

Wilson replied that such a goal would be difficult given the number of residents but said the building would be considerably more efficient than typical apartments.

Martin said the daycare center had been offered the opportunity to be a part of a project on the site but declined.

“They don’t have the funds,” Martin said.

The project is still in the early stages of the planning process. PPL anticipates that construction would not begin until fall 2021, with units to be leased in fall 2022.

PPL plans to request $972,000 in tax-increment financing, under which the city would return new taxes generated by the development to pay for qualifying costs for a period of time.