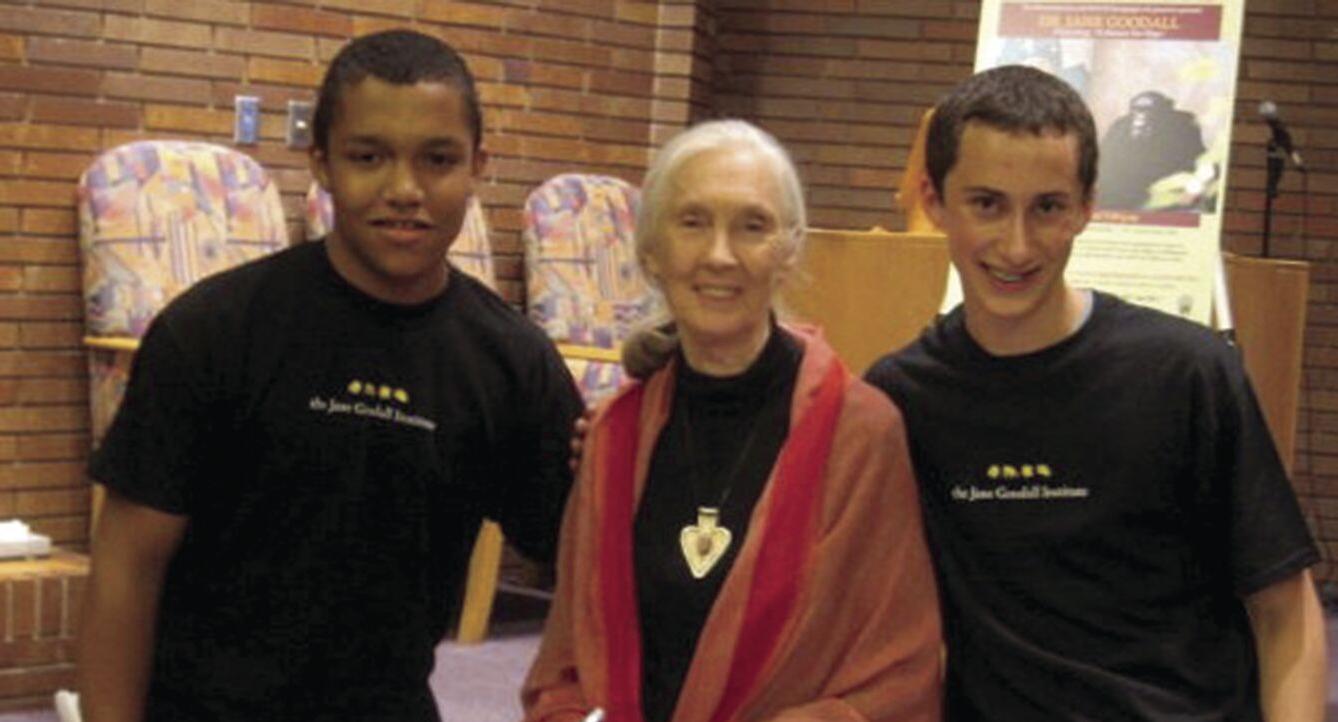 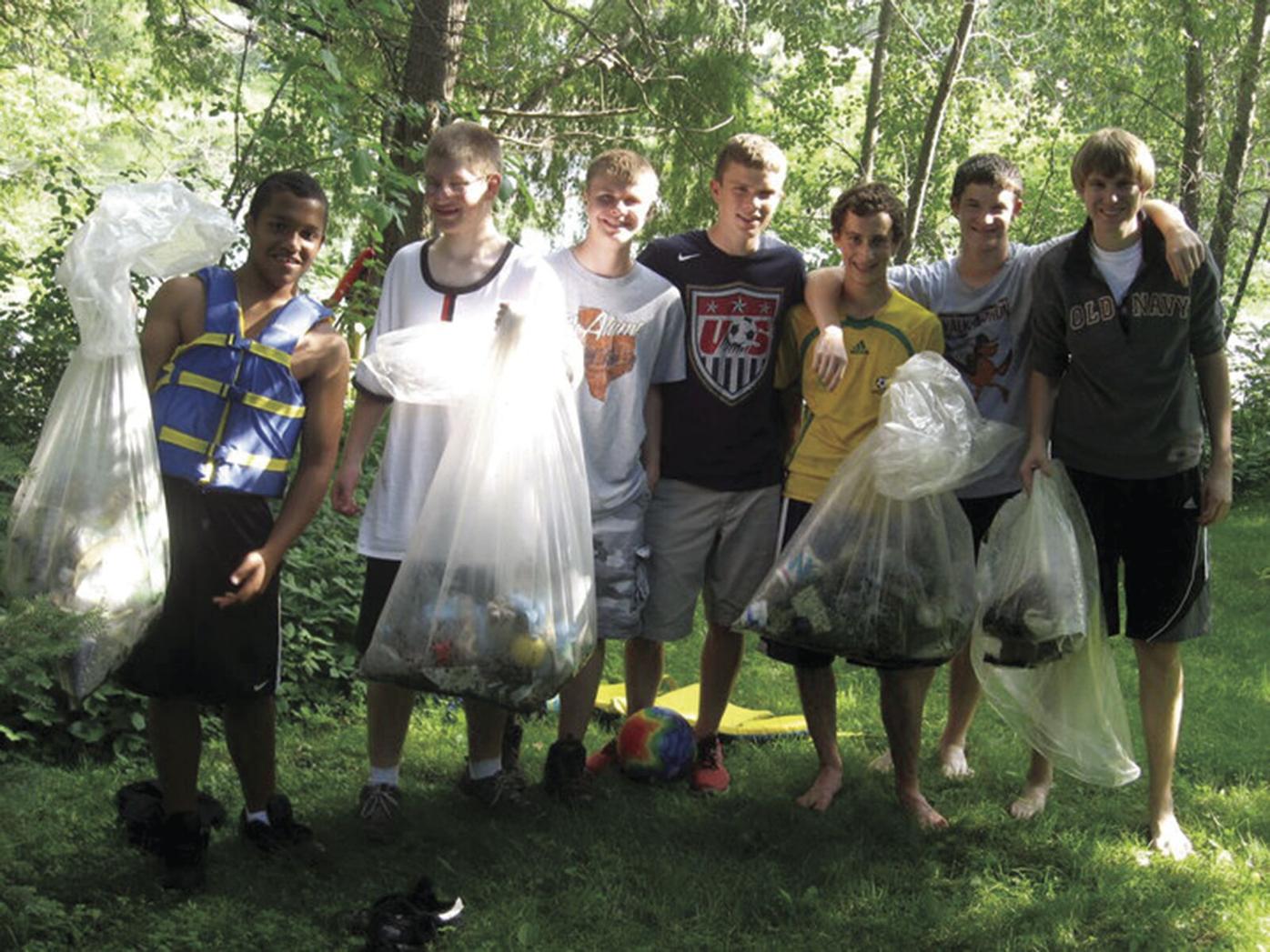 Shane West and Jesse Abelson assisted Goodall as she navigated the halls of Beth El Synagogue for a 2010 speech and took photographs with visitors. The discussion they had helped prompted them to found the environmental club Roots and Shoots at their school.

“We were just kind of inspired to try to do what she kind of always preaches and do our little piece to make the world a better place,” said Abelson, whose mother co-chaired Goodall’s appearance.

A club that began with such humble actions as fishing recyclable materials out of the trash nearly daily at St. Louis Park High School helped prompt St. Louis Park to adopt a Climate Action Plan. At the school district, advocacy from members helped lead the School Board to approve a climate leadership resolution and plans to add solar panels atop St. Louis Park schools.

As West and Abelson look back at how the club they created has blossomed, they are seeking to encourage St. Louis Park grads to pursue environmental careers through a scholarship fund.

Councilmember Larry Kraft, who connected with Roots and Shoots as former leader of the nonprofit iMatter, said of the high school group, “In late 2015, they took up the mantra of climate action in St. Louis Park, really pushed the city and the City Council to act, and have forever changed the course of our community.”

While St. Louis Park may be small by itself, Abelson said actions taken in the city have helped spur similar plans elsewhere, helping to make a larger impact.

“Global is local; local is global,” Abelson said. “Any little difference can really spread and make a huge impact.”

A prior environmental group at St. Louis Park High School had fizzled out, and West recalled that only about five people attended early Roots and Shoots meetings.

“I was trying to go to Bruegger’s just to try to entice people to come in the mornings to get a bagel,” West said.

Early projects included cleaning a pond near Abelson’s home and raising funds for the International Wolf Center in Ely.

“Although at the time we didn’t see much growth, seeing the seeds that we were able to plant and now seeing the seeds that these other students have planted in the city government is inspiring for me to want to give back to these students and for the future students,” said West, who noted environmental issues have been at the forefront of international discussions.

“I think it’s good to have the youth involved and inspire them to pursue that as a future,” West added.

The new generation of students are particularly focused on climate change, Abelson noted.

“I was really inspired by how the Roots and Shoots group has really kind of taken the group and really made it their own,” he said.

On climate change, Kraft added, “Young people are the ones that are providing the leadership, really, in the country on it.”

Recalling the days of digging through the garbage prompted West to consider the reasons for creating a new scholarship.

“There wasn’t always fun and games, and it won’t always be so,” he said. “We need something to push them in that direction. They already know it’s the direction they want to go, but sometimes that road can be hard.”

The scholarship will operate through St. Louis Park Dollars for Scholars, with the application asking applicants how they plan on using post-secondary education to further help the environment, animals or the community. The scholarship prioritizes students with financial need who have been involved in fighting climate change with Roots or Shoots or in other ways. The scholarship provided its first $500 award this year. Abelson and West hope to expand the scholarship to multiple people each year.

West said meeting Goodall contributed to his work as a veterinary technician working with animals at the University of Minnesota. He noted that she wished him good luck with his career in a book she signed for him.

“If I could ever just be a fraction of somebody like Jane Goodall or Steve Irwin or Dian Fossey – these people who have done so much for conservation and inspired people to love the natural world so much – that’d be amazing,” West said. “I think that event was life-changing.”

Similarly, Abelson – who instead works with human patients as a medical student at the University of Minnesota – said, “Her support for us trying to do even something as minuscule as cleaning up a lake in St. Louis Park was just really life-changing and inspiring.”

He saw Goodall speak again about two years ago at the University of Minnesota. That talk, about giving back to the next generation, helped plant another seed – this time for the scholarship.

As Goodall helped the environmental interests of West and Abelson to flourish, West said they want to help water the seeds for others. They are impressed with what Roots and Shoots has accomplished already.

West said, “They don’t have to dig through the trash anymore.”

For more information about the Roots and Shoots scholarship, contact Abelson at jesseabelson@gmail.com or West at west.shane29@gmail.com.