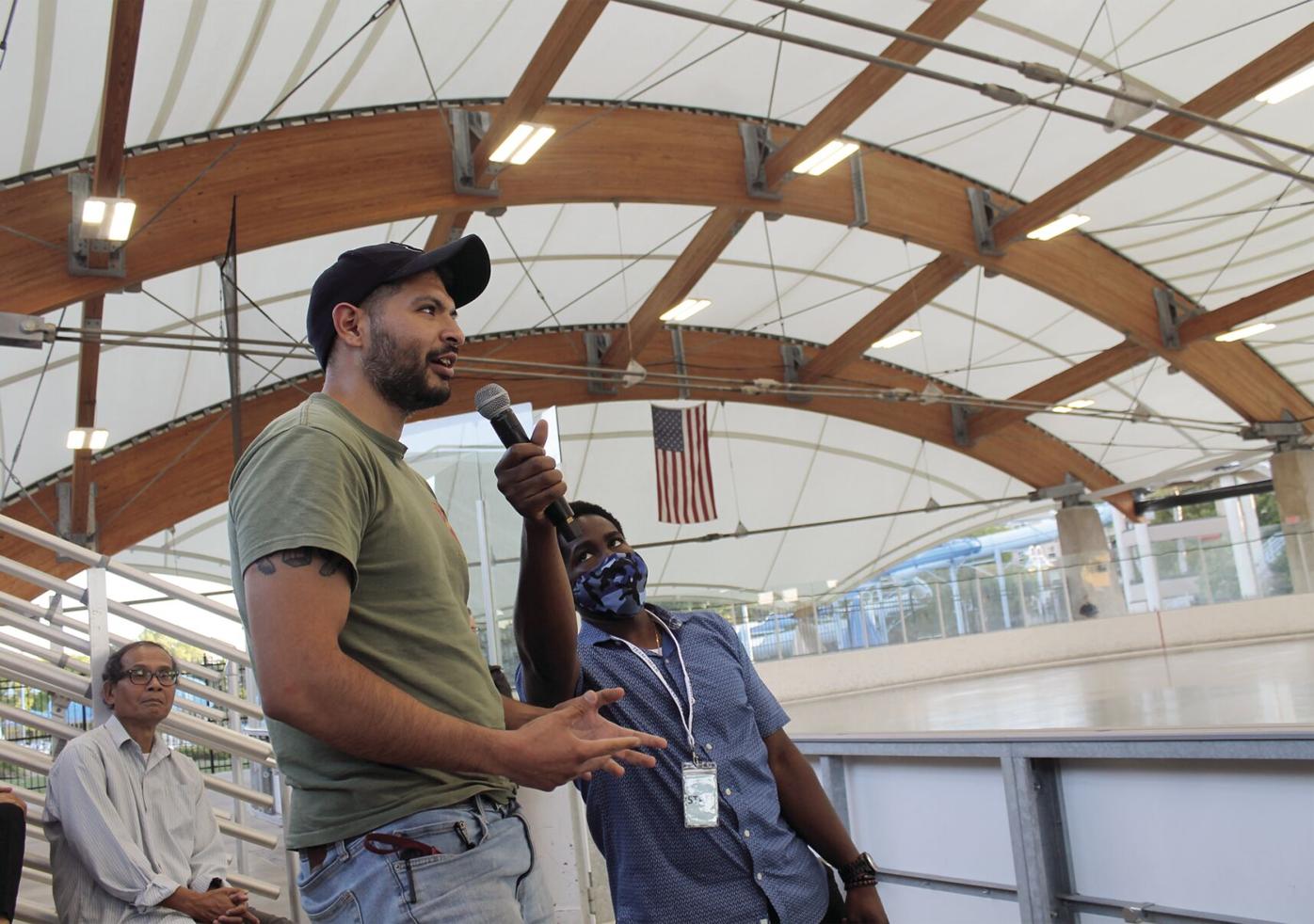 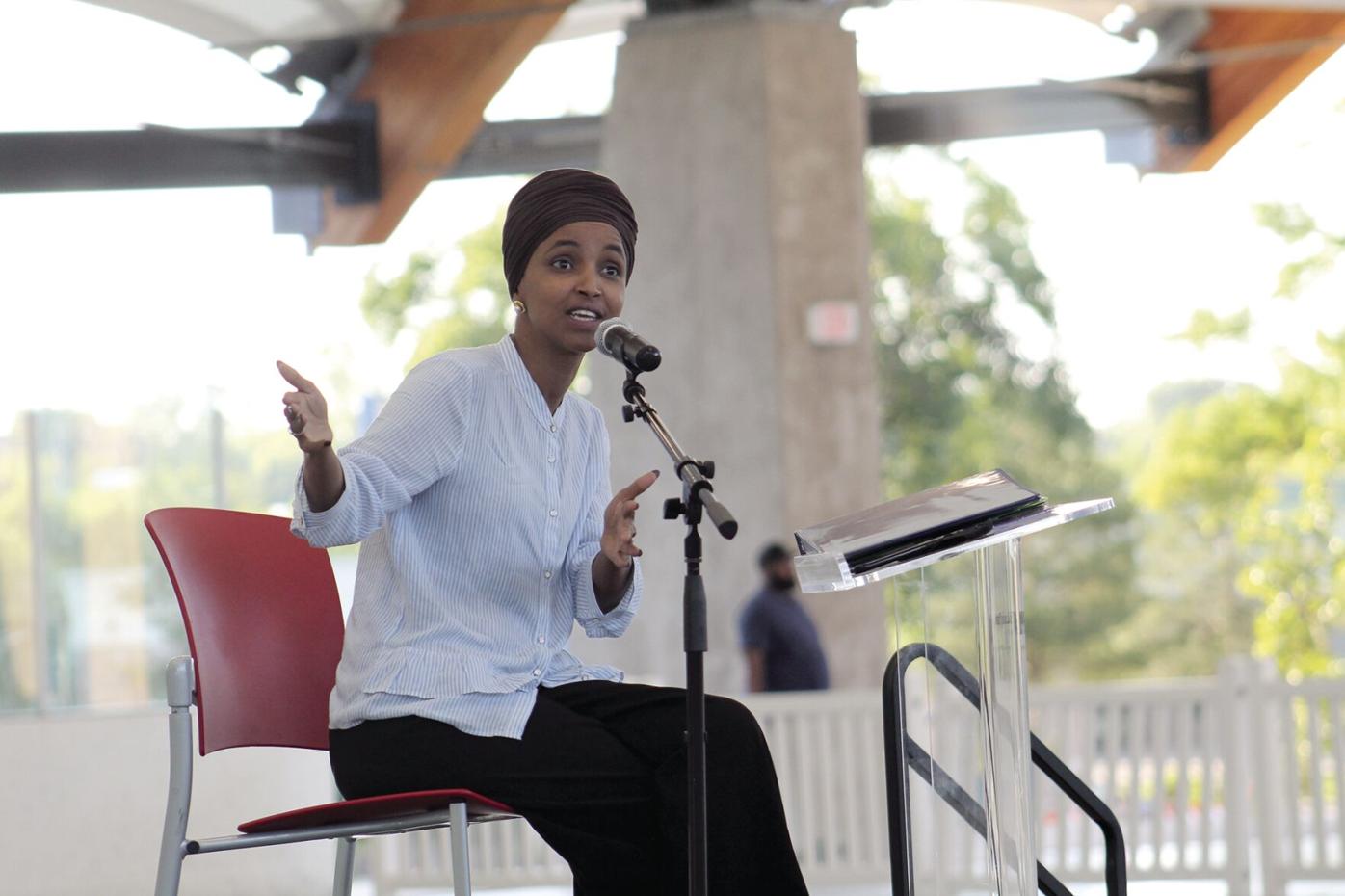 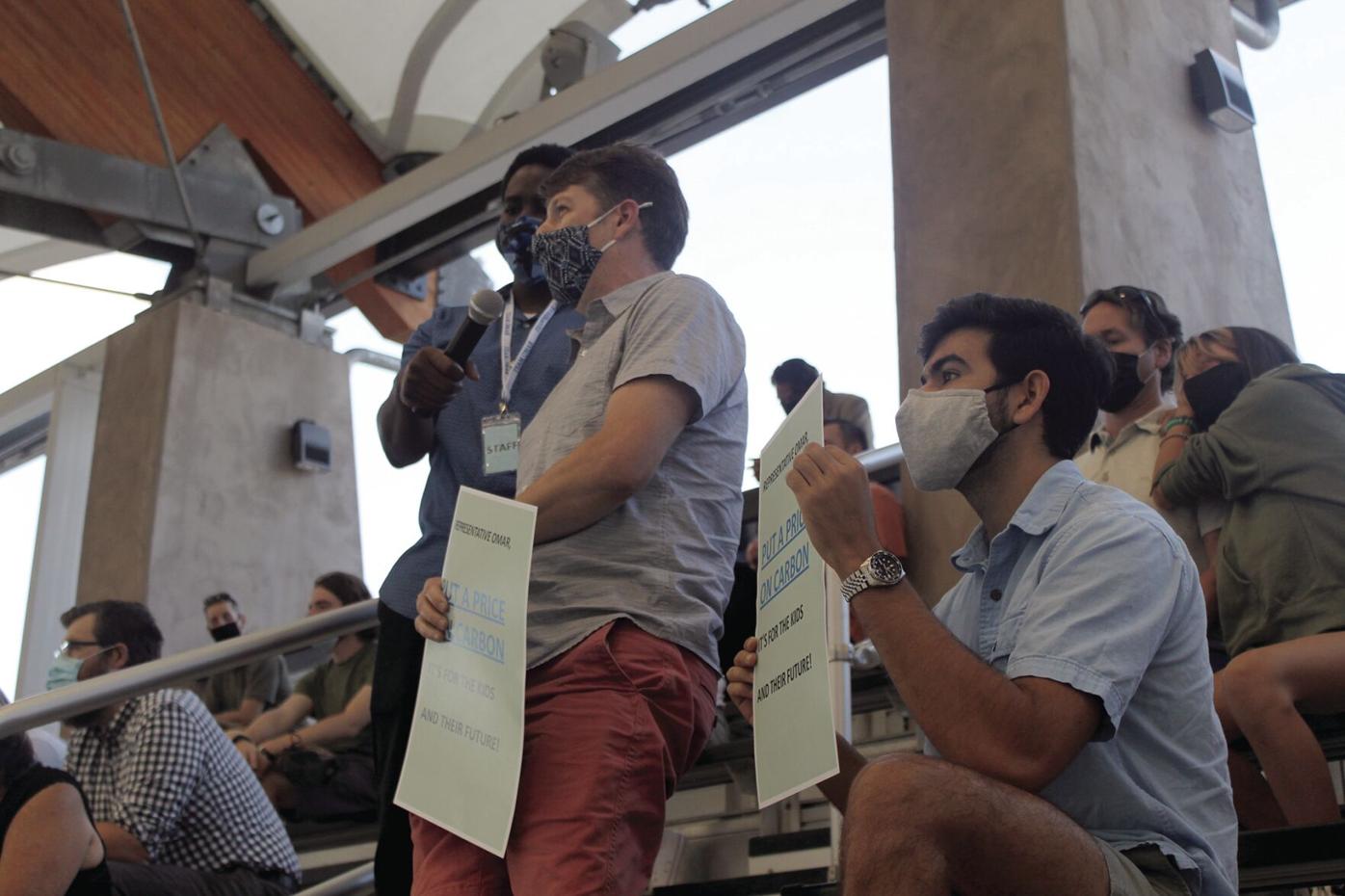 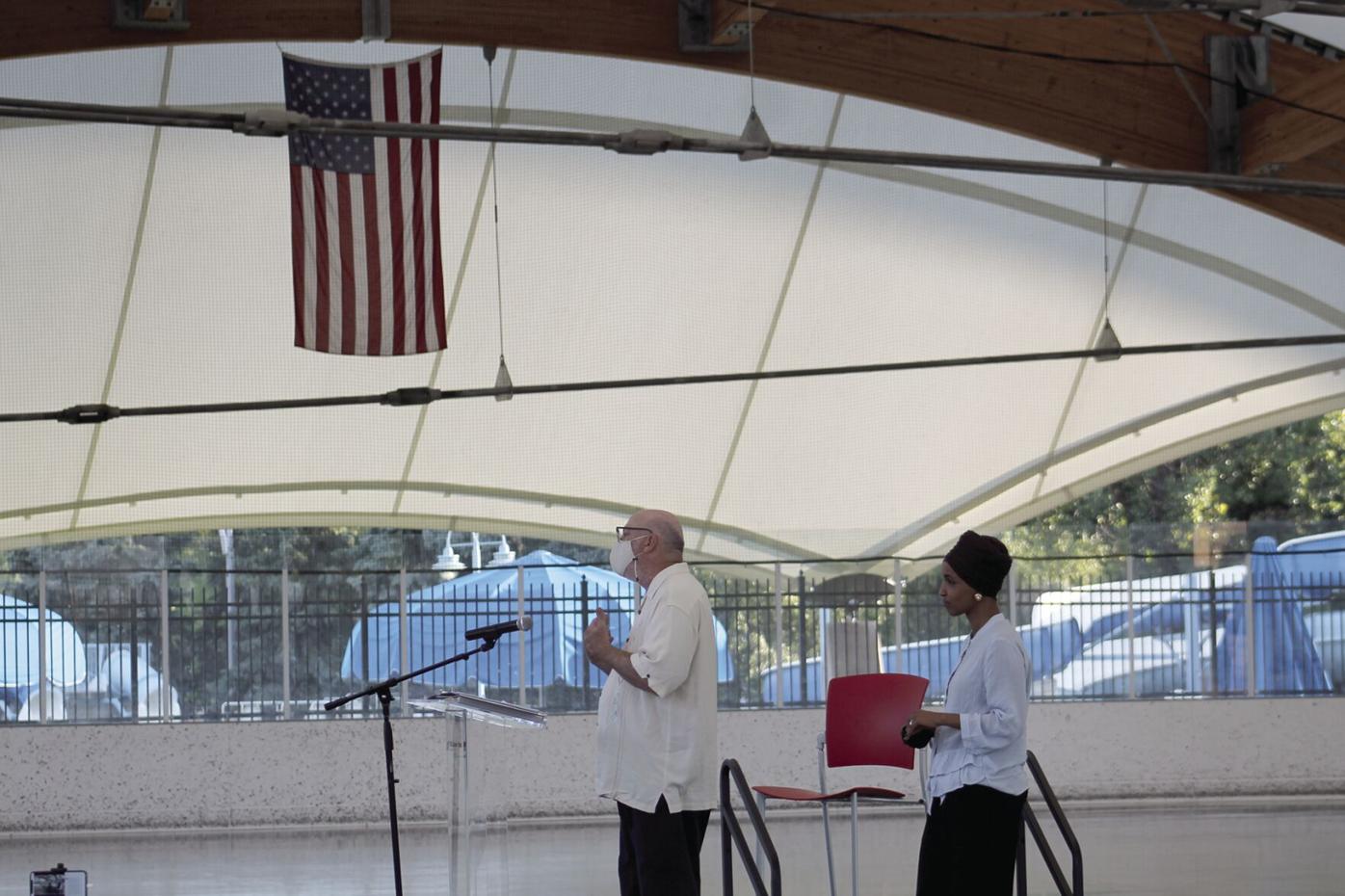 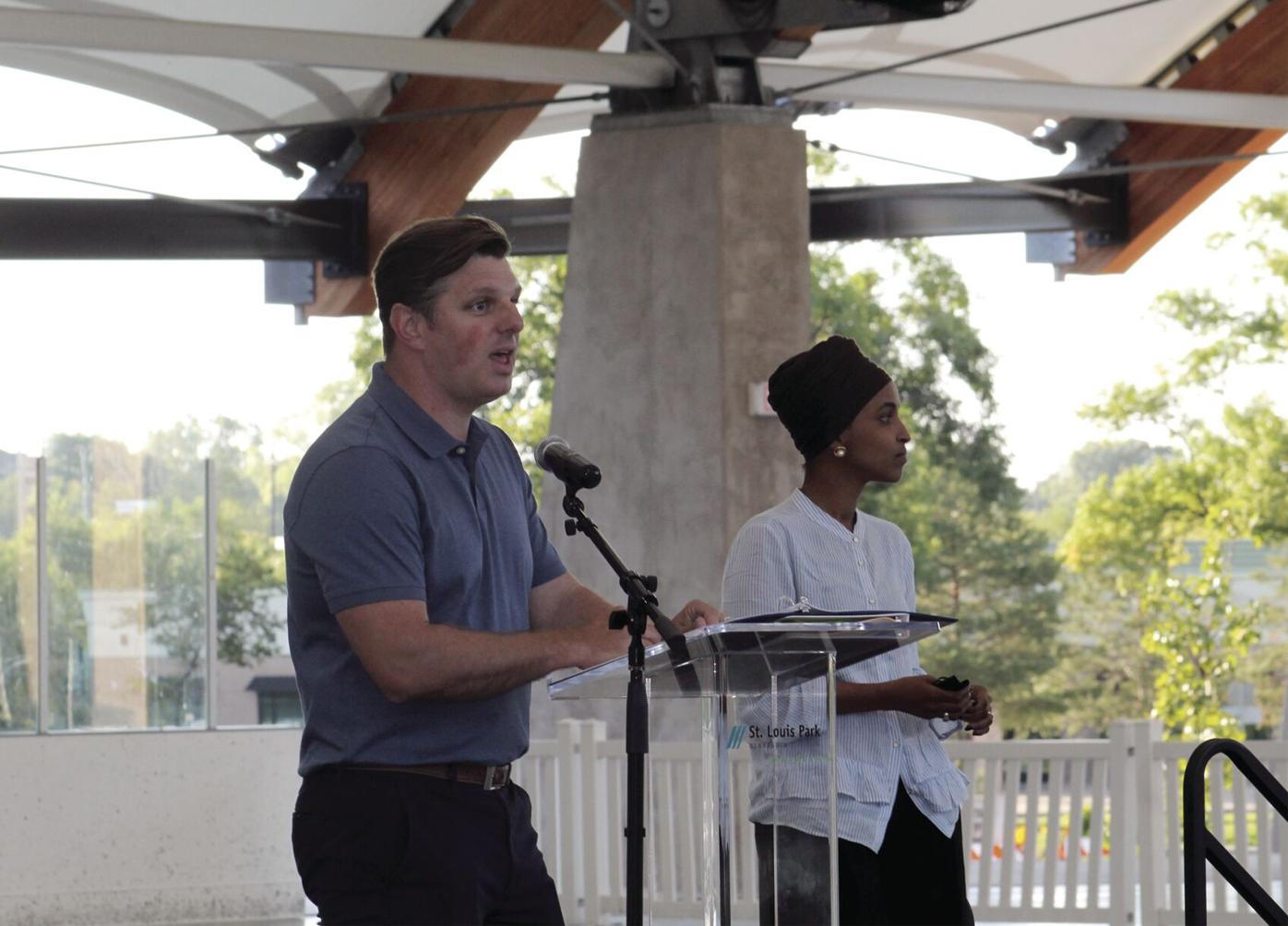 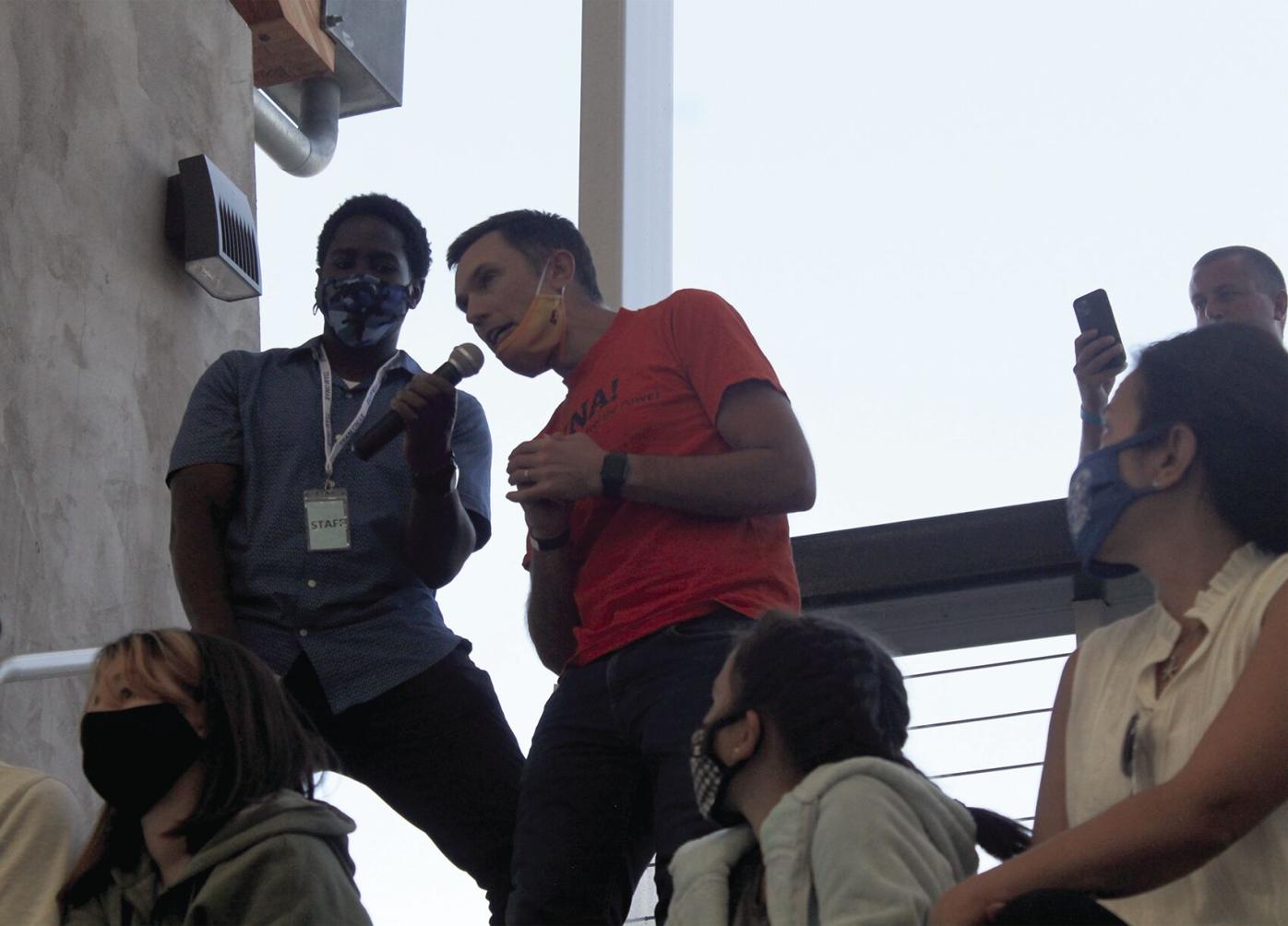 A speaker with the Laborers’ International Union of North America encourages support of infrastructure legislation. (Sun photo by Seth Rowe) 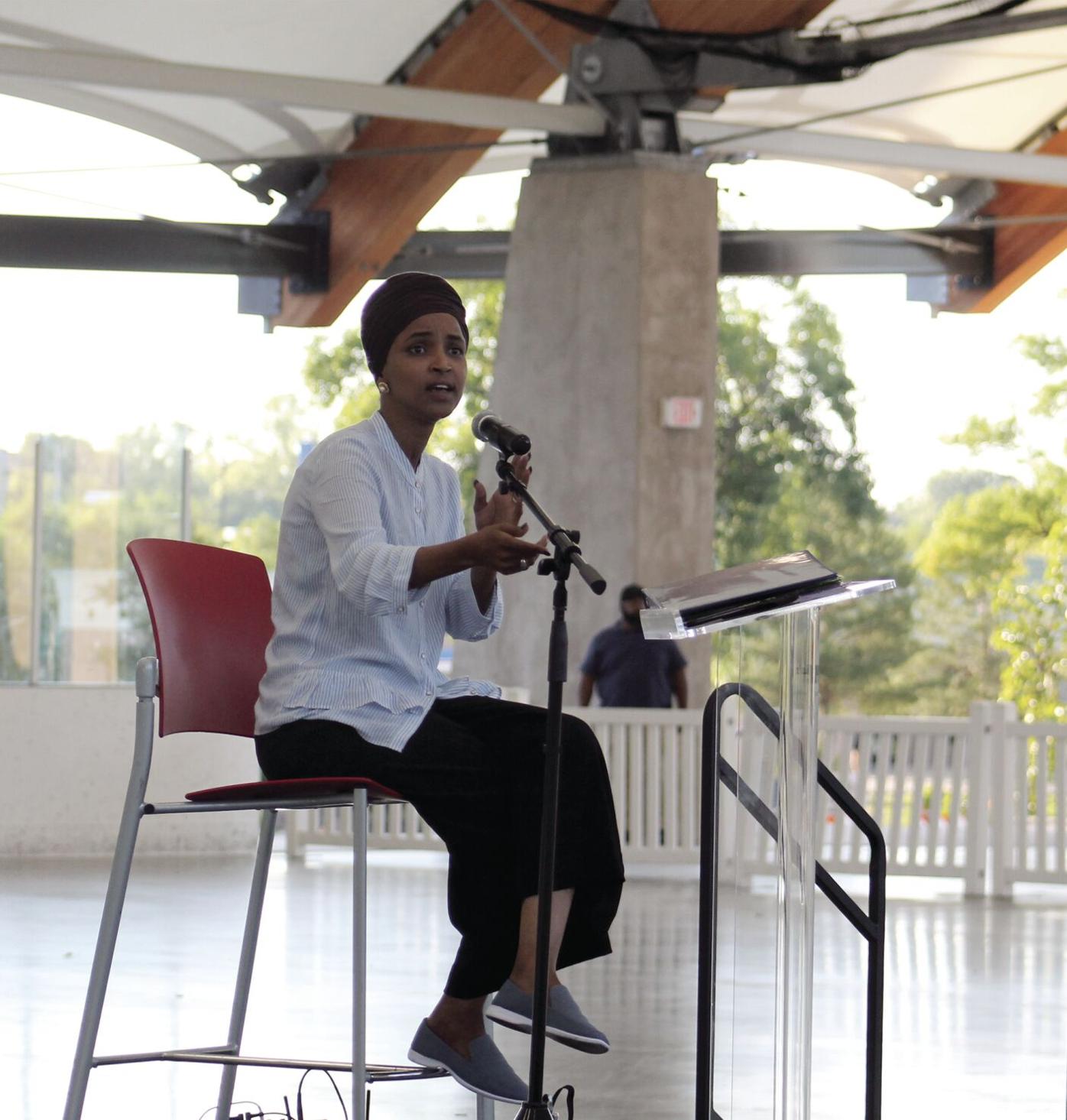 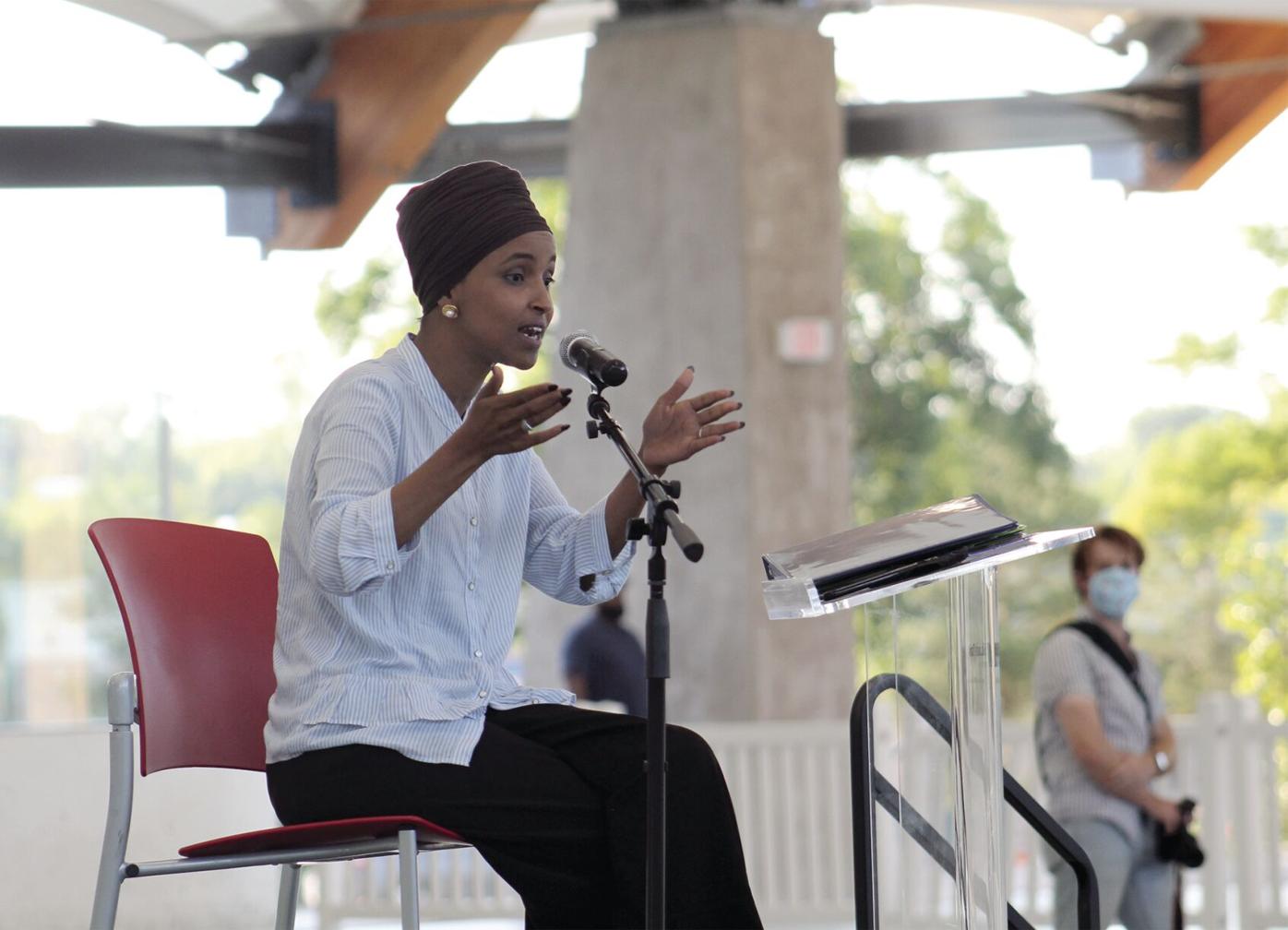 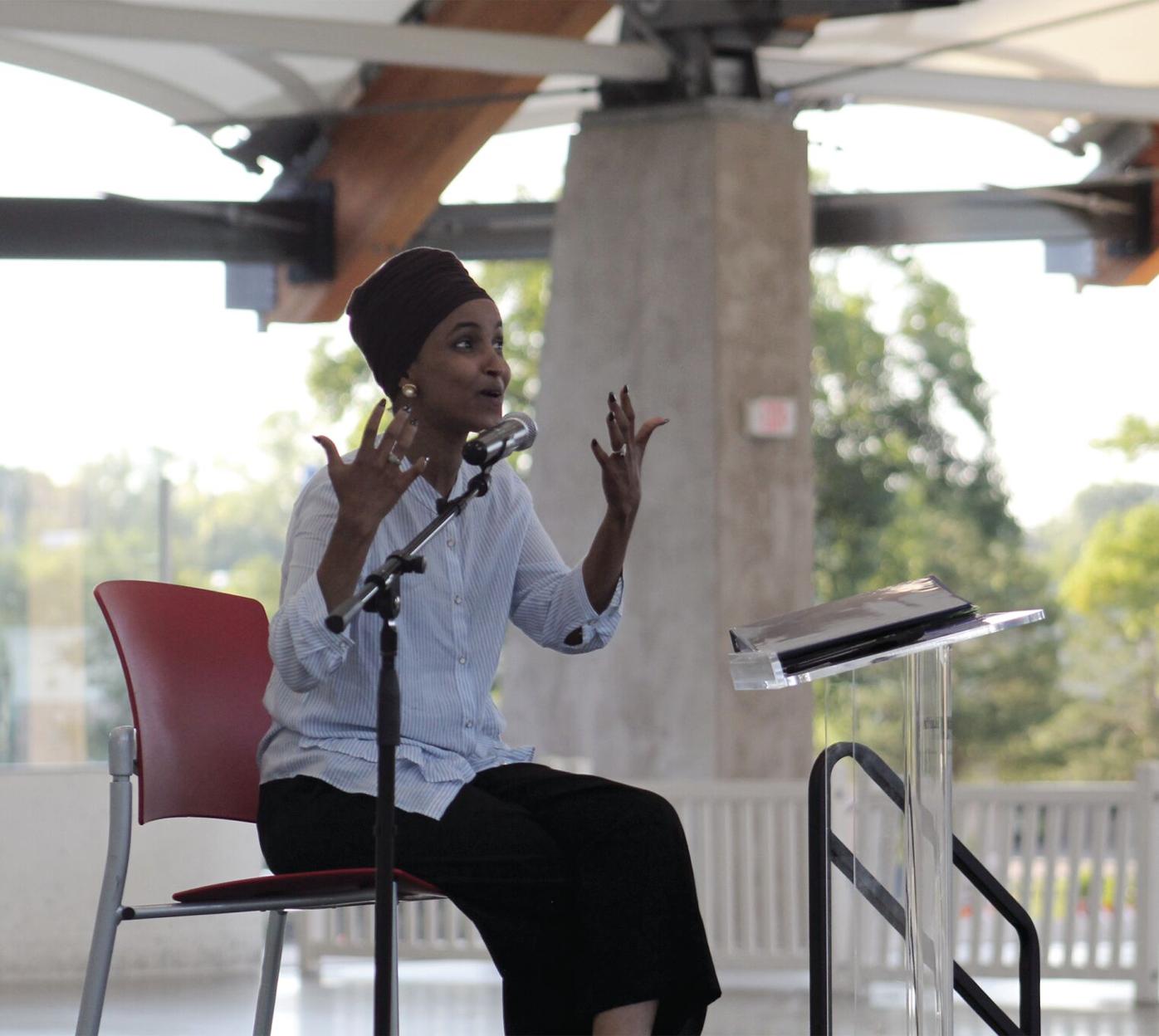 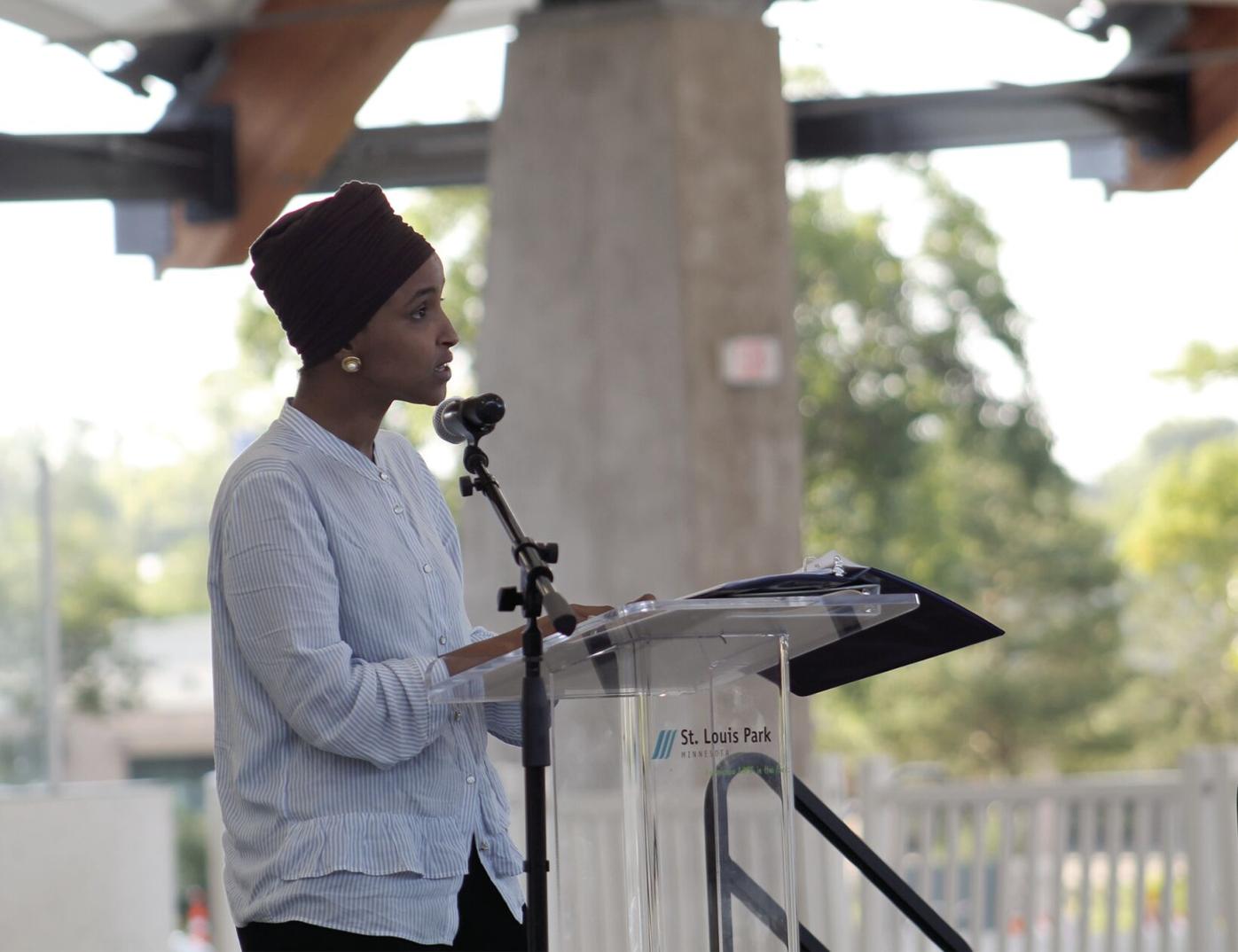 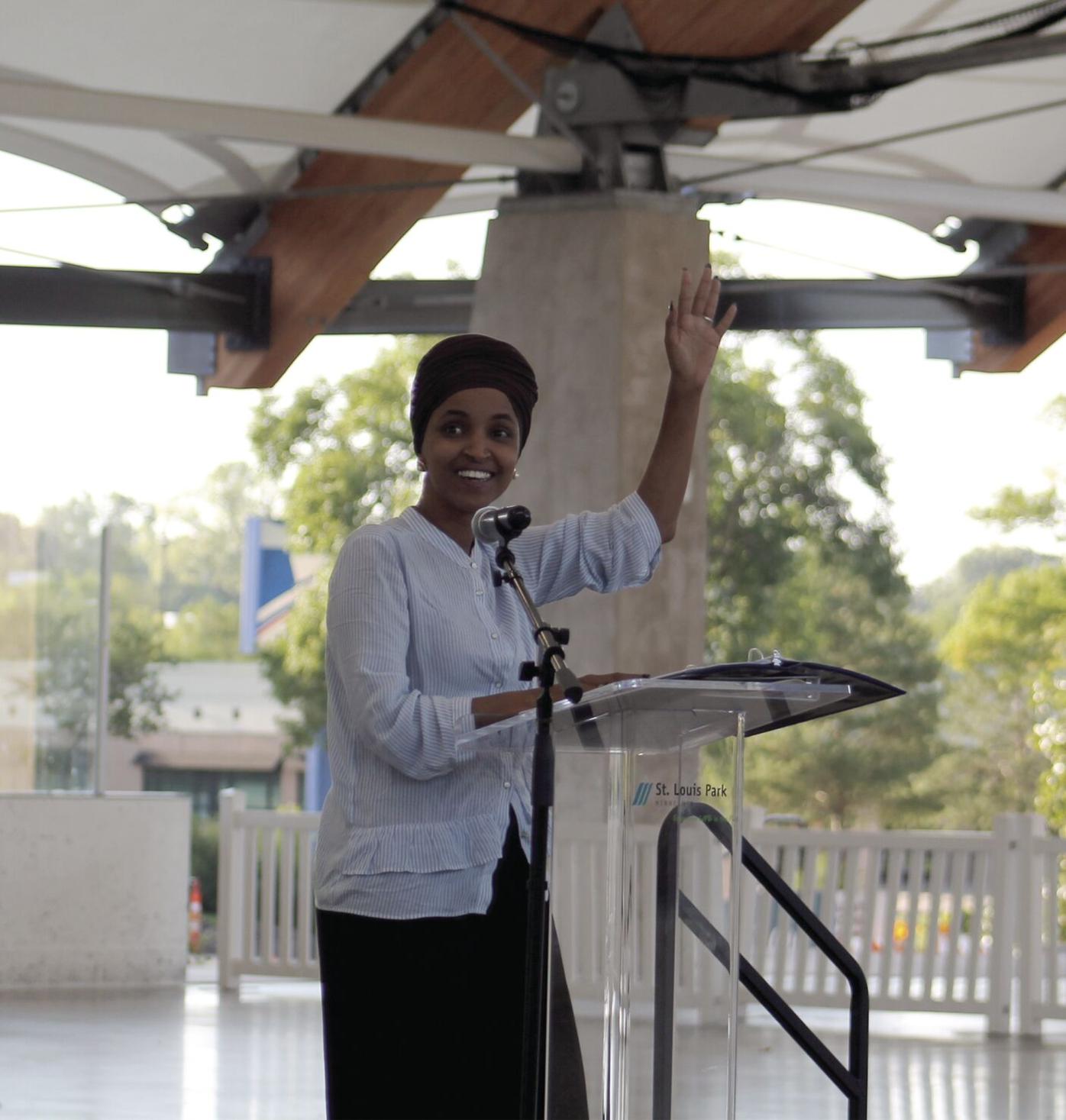 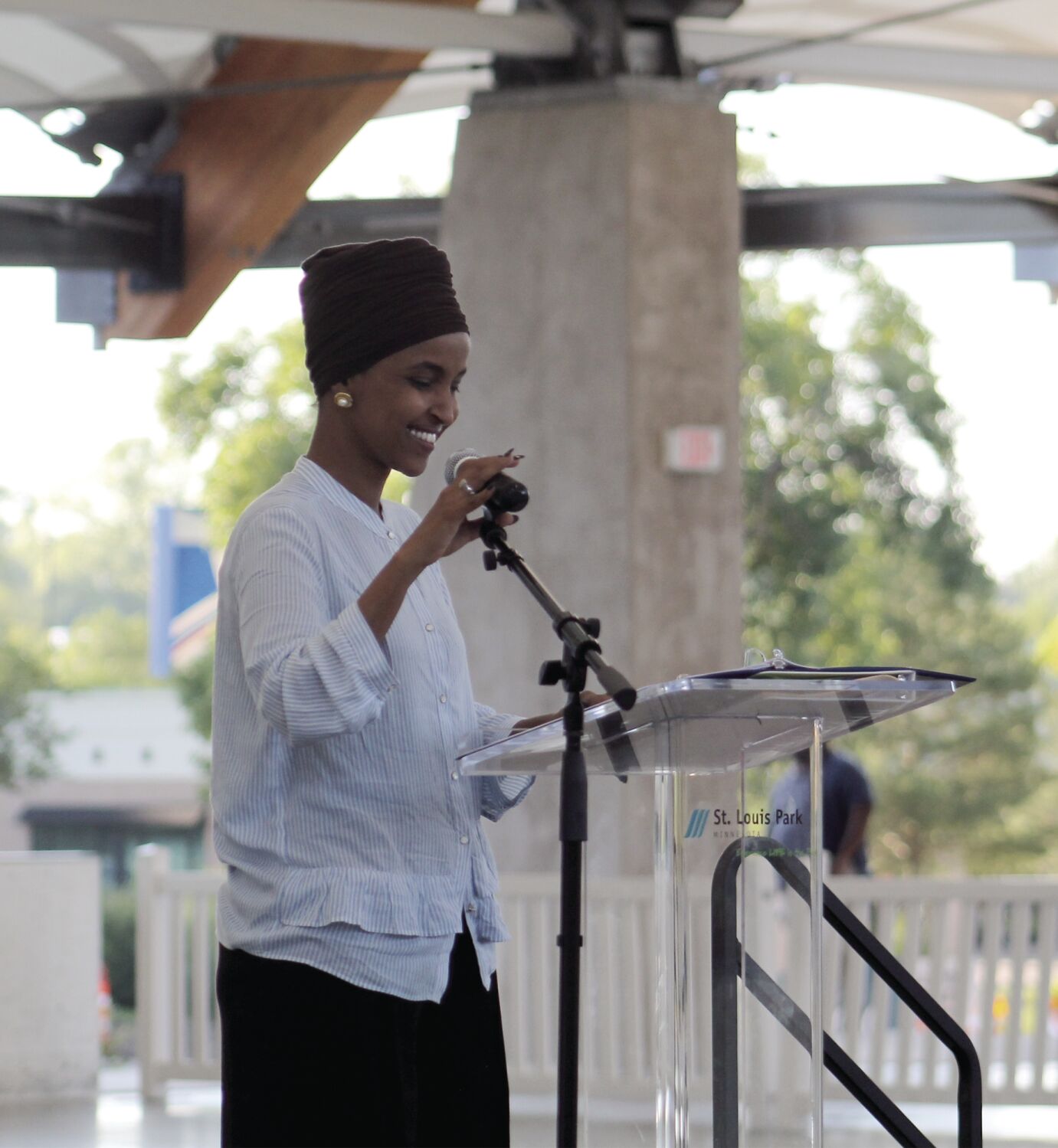 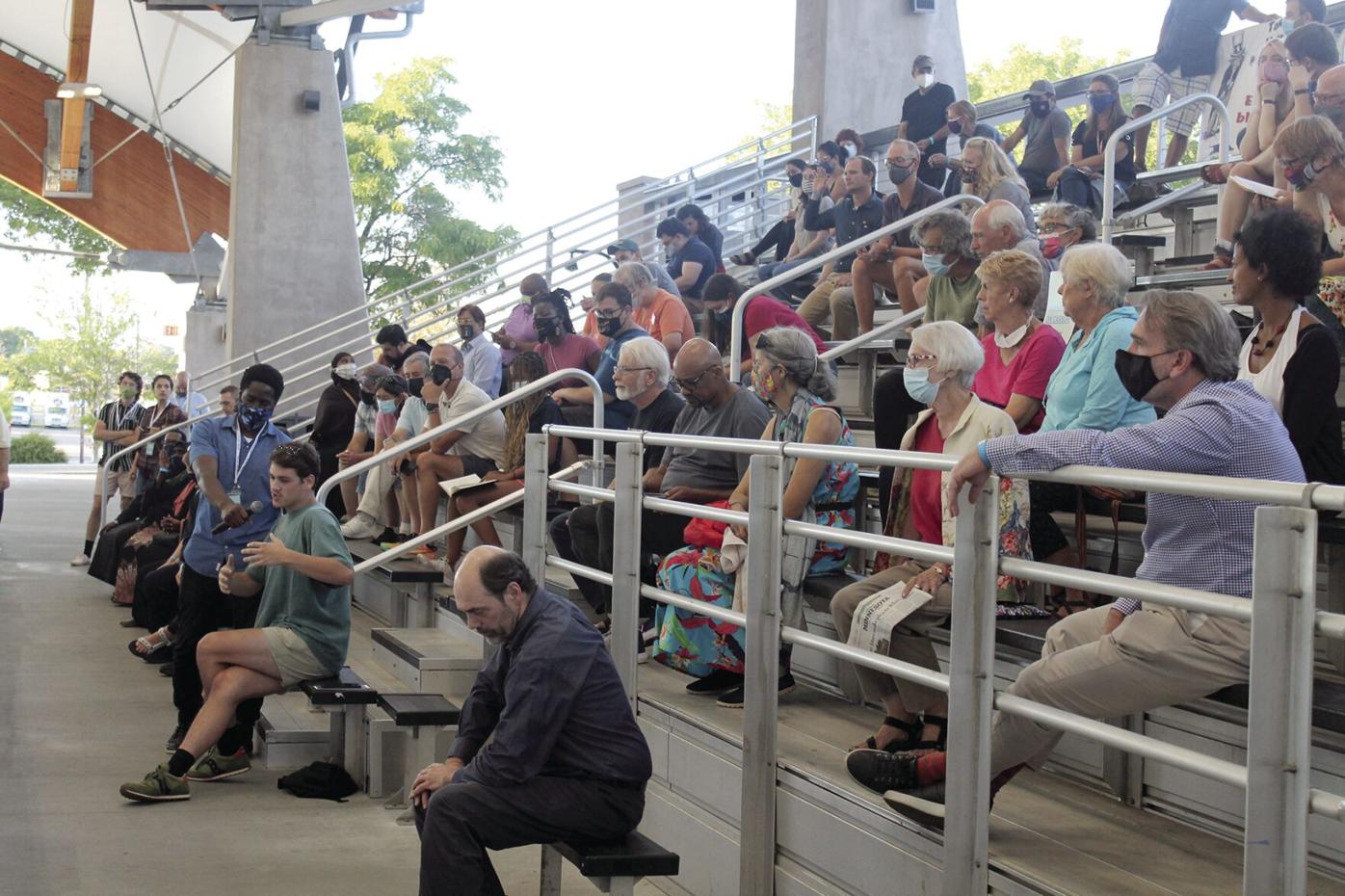 An audience member asks a question in support of progressive policies as a crowd listens on bleachers during a town hall meeting with U.S. Rep. Ilhan Omar. (Sun photo by Seth Rowe) 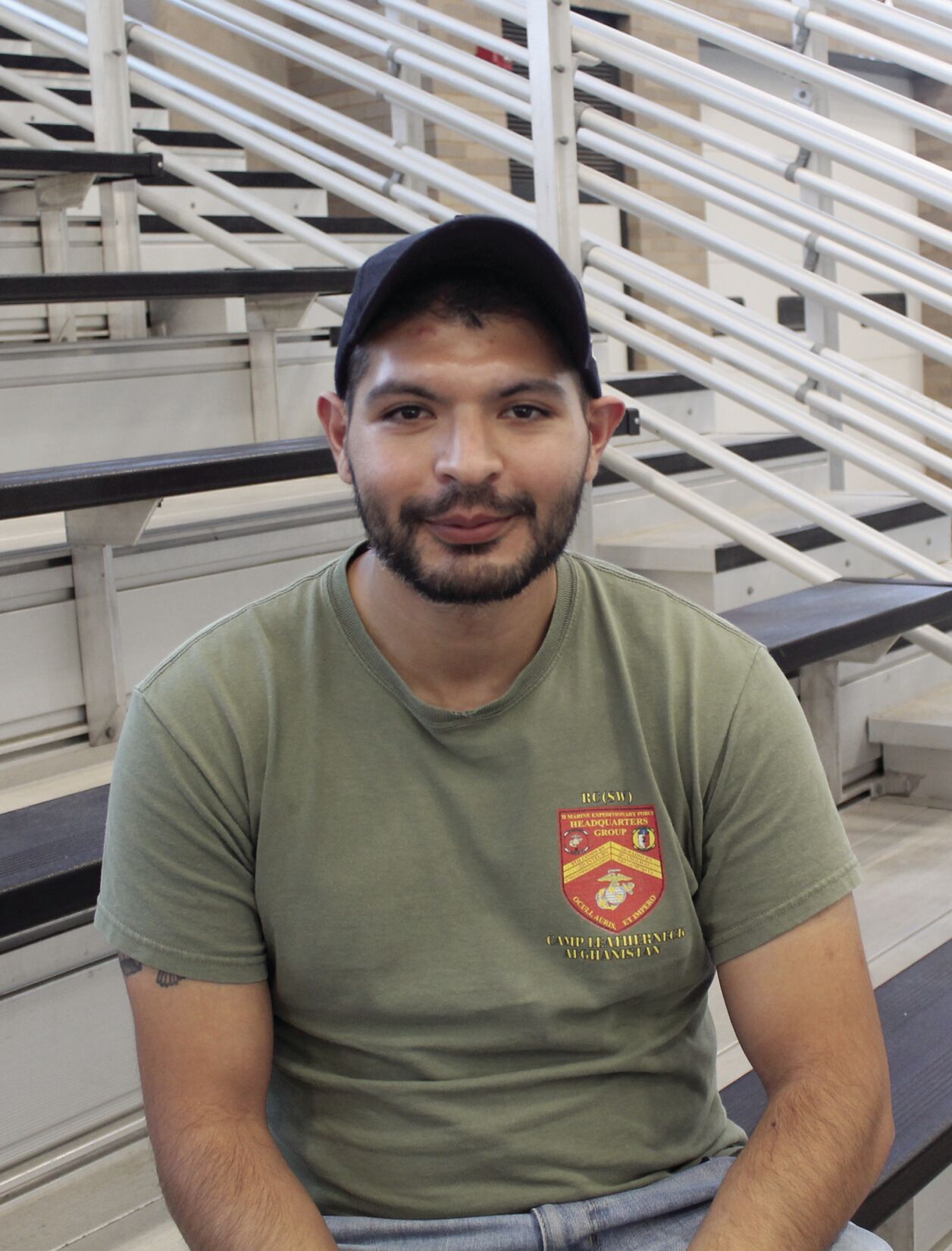 Minneapolis resident Sergio Barrera Marines-related shirt for “Camp Leatherneck Afghanistan” as he discusses the withdrawal from the country and his support for refugees of the 20-year conflict. (Sun photo by Seth Rowe)

A speaker with the Laborers’ International Union of North America encourages support of infrastructure legislation. (Sun photo by Seth Rowe)

An audience member asks a question in support of progressive policies as a crowd listens on bleachers during a town hall meeting with U.S. Rep. Ilhan Omar. (Sun photo by Seth Rowe)

Minneapolis resident Sergio Barrera Marines-related shirt for “Camp Leatherneck Afghanistan” as he discusses the withdrawal from the country and his support for refugees of the 20-year conflict. (Sun photo by Seth Rowe)

U.S. Rep. Ilhan Omar responded to a former Marine’s request for help for Afghan refugees, discussed how infrastructure legislation could help her district, and defended herself against accusations that her views are radical during a town hall meeting.

Minneapolis resident Sergio Barrera, 31, a veteran who served in the U.S. Marine Corps from 2008-2013, sought Omar’s support for legislative changes that could help Afghans during a question-and-answer period at the Aug. 31 event at the Recreation Outdoor Center in St. Louis Park.

“I’ve worked with a lot of Afghans and also came from an immigrant community myself, and I’ve been trying to help them in ways that I can,” said Barrera, who worked closely with many Afghan interpreters as a linguist.

Barrera pointed out that some Afghans who are eligible for refugee status did not come to the United States during the evacuation process because their families had not gained permission to come with them due to complications with the application process.

He also noted that Afghans who are also U.S. citizens and residents may not qualify for refugee assistance even though they’ve “pretty much lost everything.”

Barrera asked what the U.S. government is doing to help people left behind and their families.

After thanking Barrera for his service and pointing to the number of people the U.S. did evacuate in a short time span, Omar acknowledged limitations in the current system for refugees. As an example, she mentioned paperwork complications for a constituent relating to evacuations he sought for his adult children.

Omar said she is “extremely passionate” about having conversations with Speaker Nancy Pelosi and other members of Congress about expanding who qualifies for resources under the nation’s resettlement programs, such as for people seeking asylum. She also supports raising the cap on the number of refugees allowed into the United States.

She called the Biden administration’s assurances that the country will continue to seek to help people leave Afghanistan after the withdrawal promising.

“We will hold them accountable for that,” Omar said.

Barrera said after the town hall meeting that many veterans he knows have been seeking to help Afghans they know escape.

“The Afghan soldiers that I worked with and I spent a lot of time with and became friends with, I don’t know what happened to them in the long run,” said Barrera, who said he maintained contact with some interpreters over the years via social media. “I don’t even know where they’re at today – whether they’re safe, whether they’re still alive or if their lives are in danger.”

Barrera later added in an email, “I was satisfied with Representative Omar’s statements because I believed from her answers that she cared a lot about these issues and was working to help out.”

He said he appreciated her explanation of the hurdles facing refugees and her commitment to ensuring the Biden administration keeps its word about continuing to assist people who remain in Afghanistan.

Omar also addressed the situation during remarks at the beginning of the town hall meeting.

“It’s been really frustrating to see the immense human tragedy in Afghanistan,” Omar said. “In this critical moment, we must draw upon the best of our history and open our arms to those seeking the opportunities that many of us in this country have been given.”

Omar also addressed funding legislation in Congress. She indicated she is seeking more than $14 million in federal funding for projects that she said “invest in communities that were hit the hardest by both the pandemic and the social unrest in the past year.”

The projects relate to joblessness, food and housing insecurity and access to health care, Omar said.

“This legislation invests in under-served communities and addresses long-standing disparities,” Omar said of the INVEST in America Act, a transportation bill that won approval in the House of Representatives in July.

The U.S. Senate passed a version of the bill in August.

Omar indicated she supports a bipartisan infrastructure bill as well as a larger, more far-reaching partisan bill. She said she would push for both “together to ensure that we are not prioritizing one over the other.”

She spoke passionately when asked about her last re-election campaign and her progressive policies.

She argued that the media does not treat advocates of military intervention and “corporate giveaways” the same.

“They don’t say that person has a controversial point of view,” Omar said. “They don’t demonize them. They celebrate them. They say ... ‘This is mainstream,’ ‘This is somebody who’s listening to everybody in their constituency,’ when in reality every policy that I advocate for has 70%, 80%, 90% approval from the American constituency.”

During the event, Omar took a stand in support of a proposed charter amendment in Minneapolis that would replace the Minneapolis Police Department with a Department of Public Safety with a composition that would be determined in the future. She said the city charter, which currently requires a certain number of police officers based on the city’s population, has served as a hindrance to progress in Minneapolis.

Omar said, “Once we get ready, we’re going to have a conversation on what we should be doing about public safety to make sure every single person in our community feels safe."