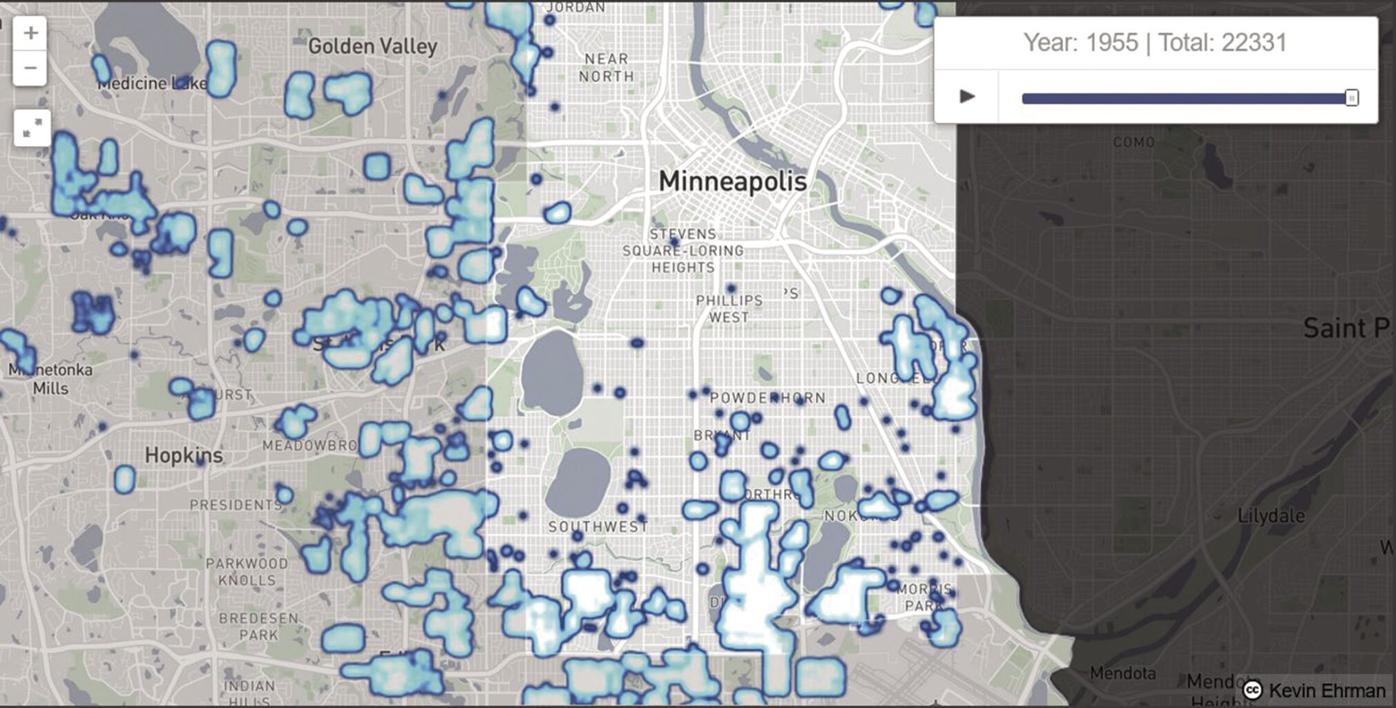 A map at mappingprejudice.org shows areas that restricted residents by ethnicity by 1955. The label for St. Louis Park, west of the Chain of Lakes in Minneapolis, is nearly fully obscured on the map by the bubbles representing addresses with restrictive covenants. (Screen capture) 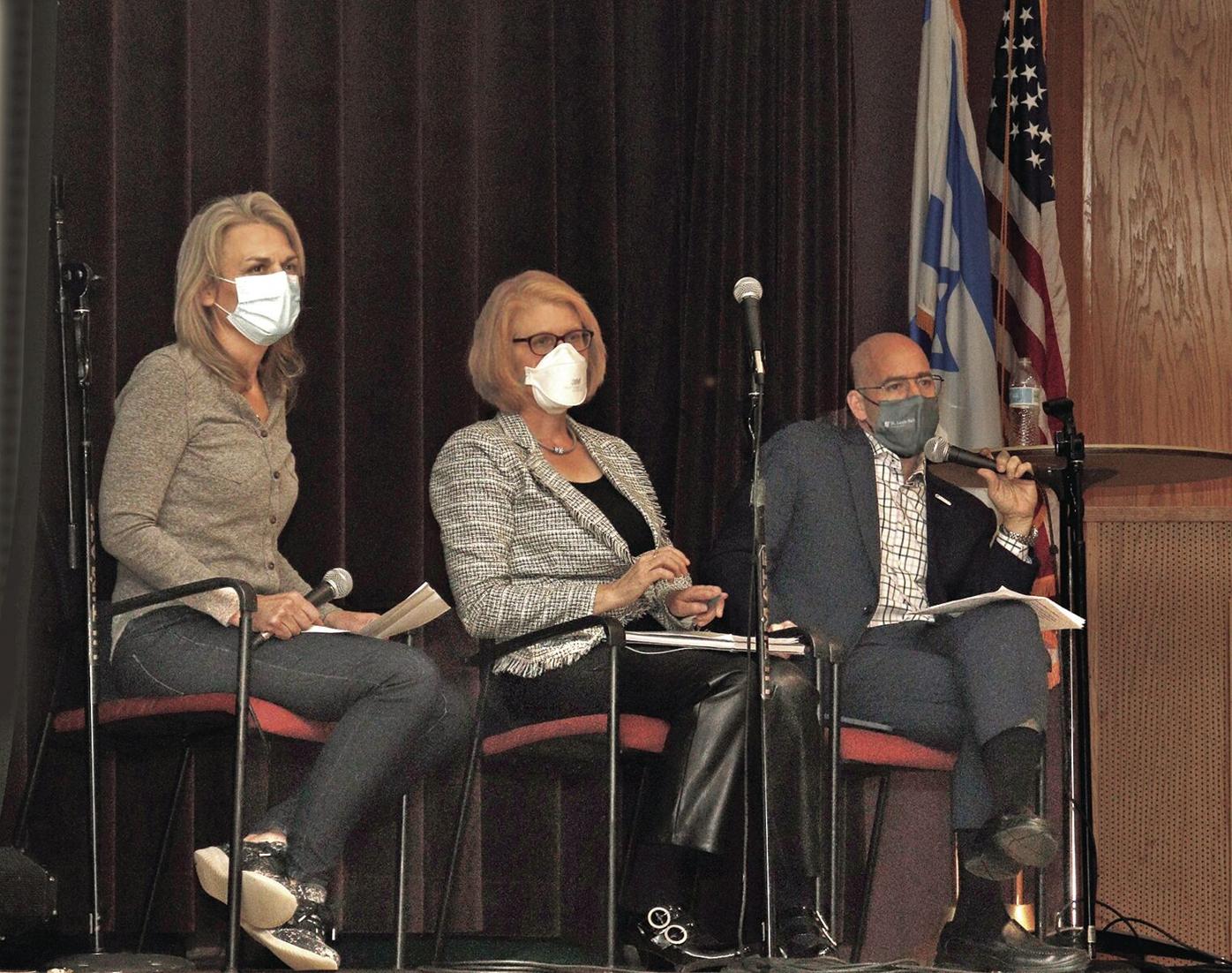 A map at mappingprejudice.org shows areas that restricted residents by ethnicity by 1955. The label for St. Louis Park, west of the Chain of Lakes in Minneapolis, is nearly fully obscured on the map by the bubbles representing addresses with restrictive covenants. (Screen capture)

St. Louis Park’s reputation for openness met a jarring dose of historical reality as a Mapping Prejudice Project presentation Nov. 16 discussed how neighborhoods in the city barred people of specific ethnicities in the past.

St. Louis Park is hardly alone as the Mapping Prejudice Project has documented thousands of properties that barred non-Caucasian residents in Minneapolis, many of the suburbs and small resort towns in Minnesota.

As part of the city’s stated commitment to become a leader in racial equity and inclusion, St. Louis Park recently joined the Just Deeds Project, which helps property owners who discover their housing deeds contain discriminatory language to discharge the language from their titles.

The restrictive covenants have been prohibited in the state since former Minnesota Gov. Elmer Andersen championed and signed a fair housing bill in 1953, and they later became federally unenforceable, but they continue to appear in deeds. Although homeowners cannot erase the discriminatory language in the documents entirely, a 2019 state law gives owners the right to renounce the language by formally filing a document with the county.

The Mapping Prejudice Project has documented more than 1,800 properties in St. Louis park with racially restrictive covenants, according to the city.

During the event at Beth El Synagogue, Mapping Prejudice Project co-founder Kirsten Delegard and St. Louis Park Mayor Jake Spano discussed their interest in addressing the racist deeds following a screening of the PBS documentary “Jim Crow of the North.” The film describes efforts by mobs in Minneapolis to force residents to move out of areas and the creation of the compacts, which could lead to a property being legally taken from an owner if sold to an individual who the compact barred from purchasing it.

The film focuses on the impact on Black families, some who left the state after meeting hostility despite prominent national connections, but the compacts often discriminated against people of a long list of ethnicities.

In a discussion with Sandy Behnken, who helped found a racial equity committee for the Creekside Neighborhood Association, Delegard said she became fascinated with the contrast that Minnesota had a progressive reputation historically but also has some of the highest disparities in the country. In interviews for oral histories, Delegard repeatedly heard about how racial covenants had been a sign of what an intolerant place the Twin Cities had been for many people.

Rather than be content to write research for other academicians, Delegard, a staff member at the University of Minnesota Libraries, wanted to make the information she uncovered accessible to the community with the Mapping Prejudice Project.

“I was really fascinated by this idea of what if people could visualize this history?” Delegard asked. “We’re in this intensely visual age.”

The result is the website mappingprejudice.org, which shows the areas in which developers created the discriminatory neighborhoods.

Sharing Delegard’s perspective, Spano said, “I have become fascinated with the fact that the stories that we tell ourselves about who we are are just not real. They’re not true, always.”

Because of his interest in maps and history, Spano became interested in checking the Mapping Prejudice Project website as researchers added addresses with the discriminatory covenants.

“About a year ago, my house popped up on the map,” Spano revealed. “In fact, my entire neighborhood has restrictive racial covenants on it.”

When some residents have asked why the city has made race equity work part of its mission, Spano said, “I always told people that cities have always been in the race business – complicitly, actively, sometimes lazily, but we’ve been involved in it. And this is, I think, a really, really important example of that.”

Spano read the language in his own deed to the audience: “No lot, plot or parcel shall be sold, leased, mortgaged, used or occupied, nor any right thereto be granted, given or permitted to any person other than a member of the Caucasian race, and specifically, not to any person of Chinese, African, Moorish or Mongolian blood or descent, except that this covenant shall not prevent occupancy by domestic persons in service.”

Early covenants often included such lists of people banned by ethnicity, and some barred Jewish residents, according to Delegard. After the Jewish community persuaded the Legislature to prohibit religious discrimination in real estate transactions in 1919, the bans typically did not explicitly specify Jewish individuals but began to move toward bans on anyone not considered Caucasian.

When comparing Edina and St. Louis Park, Delegard said, “There’s a lot of the same covenant languages used in those two places, and yet it’s interpreted very differently in those two communities.”

“Two suburbs right next to each other, right? And two very different definitions of who’s white and who’s not,” she explained, noting that the interpretation had an impact not only on social acceptance but direct economic consequences.

In Minneapolis, she noted a data researcher with the city pointed out that the patterns established by the discriminatory covenants have persisted over time regarding impacts like air pollution, maternal mortality rates and public health outcomes.

“That just hit me like a ton of bricks,” Delegard said when the city staffer pointed out the overlap in maps. “These things that were put in 100 years ago that have not been legal for more than 50 years, still are casting this long shadow over our community.”

In St. Louis Park, Spano pointed to the story of Woodfin Lewis, a Black nuclear physicist for Honeywell who moved to the city in 1952. However, residents of St. Louis Park resisted his family’s presence, quickly prompting an eviction forcing him and his family to leave six months later. The city did not become home to Black residents again until the 1960s.

“We’ve got to understand and be willing to grapple with our own history of how we got to where we’re at,” Spano said.

Information about how to find out if a property has a racially restrictive covenant and how to renounce it is available at stlouispark.org/just-deeds, mappingprejudice.org and justdeeds.org.