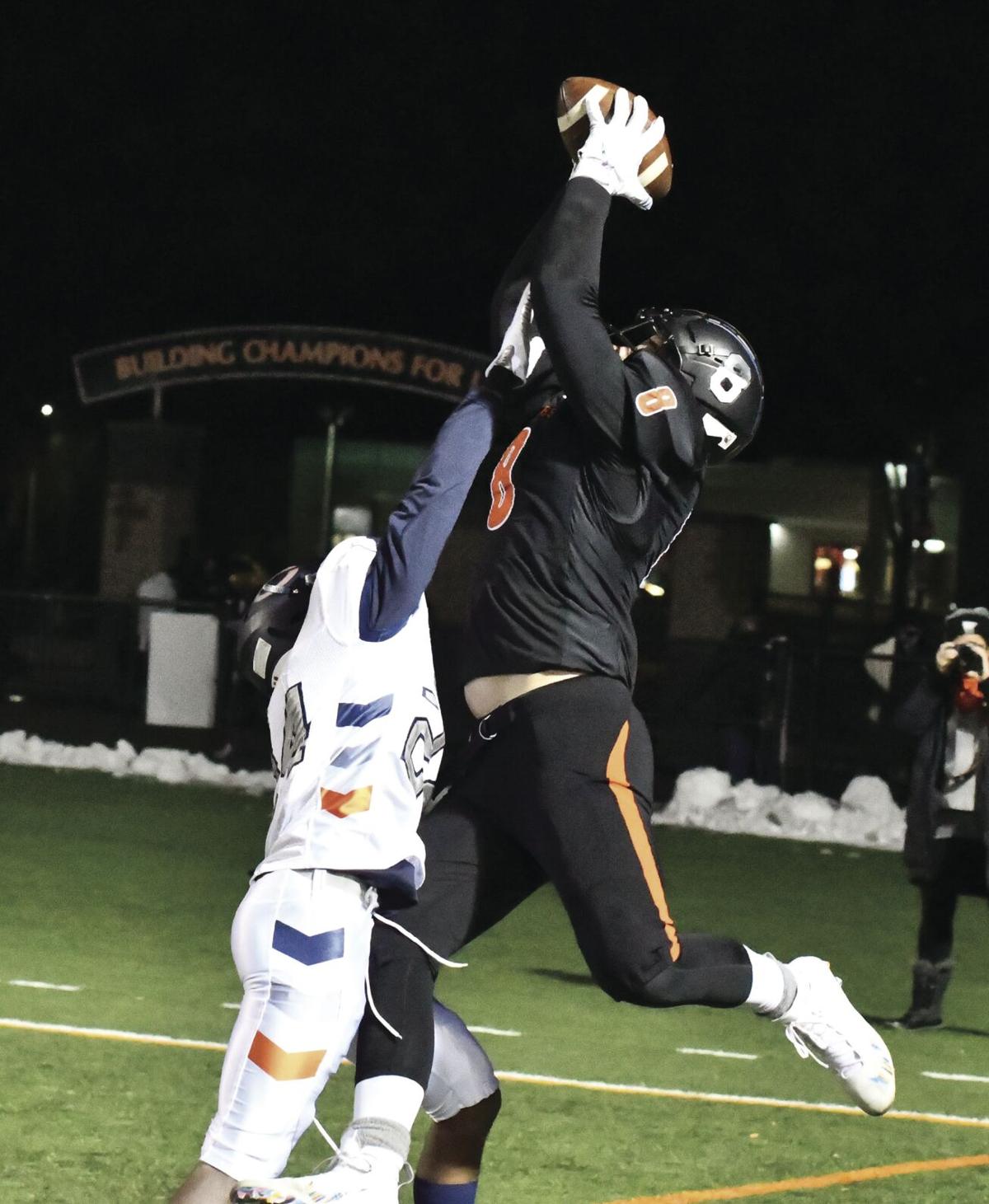 Park senior McCabe Dvorak, right, goes up to make a catch against Robbinsdale Cooper Oct. 23. He had four catches for 70 yards and one touchdown in the game. In six games he had 34 catches for 434 yards and four touchdowns. He also had 37 tackles on defense (23 solos) with two tackles for loss, one fumble recovery, four interceptions and one blocked kick. 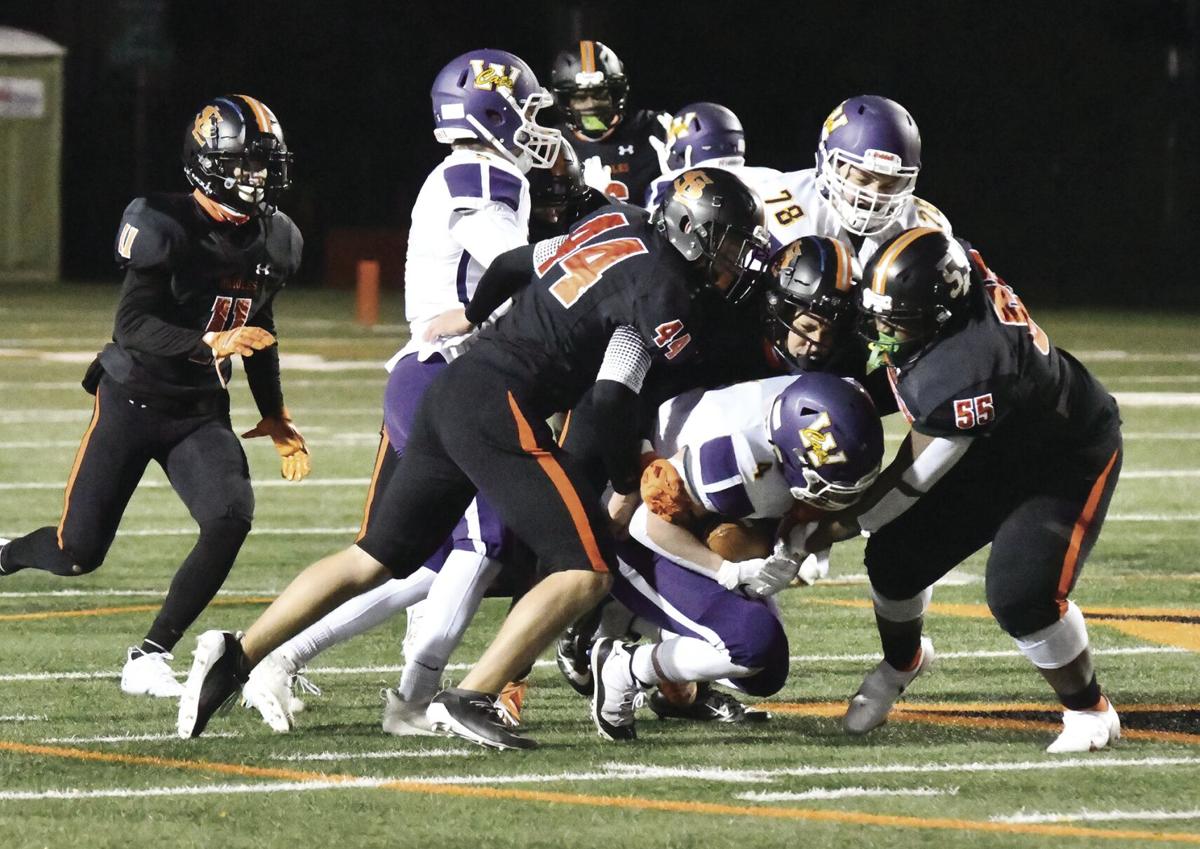 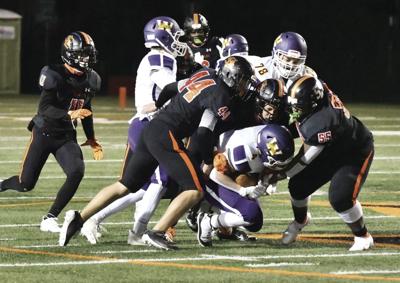 St. Louis Park football had its season end early as a positive COVID-19 test forced the administration to cancel the rest of the season the day before a Section 5-5A game against Irondale on Nov. 17.

“The player wasn’t with us since Nov. 7 and that weekend he didn’t feel well,” coach Jason Foster said. “We’ve always told them to stay home if they don’t feel well. It’s not our call to advise to get a test but it came back positive and so we let everyone know Monday, it was like a bombshell when we told the team.”

The day before a game, the team goes through a brief walk through the game plan.

Park made it through the six-game regular season going 1-5 without trouble from COVID-19. “It’s something that is always in the back of your head,” Foster said but never thought it would affect them.

“I received a ton of emails and phone calls from parents about how proud they were of their kids and I couldn’t ask for more support we receive from the community,” Foster said. “We were all very disappointed to not play that last game. It was an emotional, tough night but I feel it will make us all better for it.”

Foster agreed about the tough scheduled this season with teams like Chaska, Waconia, Cooper, Spring Lake Park, Orono, and Chanhassen on the schedule.

“Everyone we played was .500 or better, so I knew we would have to pull ourselves up by the bootstraps, it was a gauntlet of a schedule,” he said, with Chanhassen as the top team the Orioles played. “Chan was the best team by the far, very solid coaching staff.”

Park made it a 21-14 game after Will Dvorak found McCabe Dvorak on a 68-yard touchdown in the third quarter. “The kids fought,” Foster said. “We were excited about the effort because they were the heavy favorites but we showed grit and toughness but we just wore down.”

Looking back on the season, Foster was proud of the team for displaying true grit during what was anything but typical from the spring, summer, and fall.

“Very proud of the kids and what they overcame,” Foster said. “They took what they had and ran with it and we’re grateful to play at least six games.”

Park had nine seniors on the roster this fall with a majority of juniors and sophomores.

Quarterback Will Dvorak threw for more than 1,000 yards in six games to help Foster nominate him for Suburban White Subdistrict for Offensive Player of the Year. McCabe Dvorak was nominated by Foster for Metro Player of the Year for his versatility on offense, defense, and special teams. Running back Zeke Oppegaard has one more varsity season and the offensive line included two sophomores and two juniors with the same coach to help build some consistency into the future. Add in the season Christian Arteaga had as a key role not only as a linebacker but as Foster described him as a lynchpin for the entire team.

“In 14 years of coaching, I’ve never seen someone with his mentality,” the Orioles coach said about Arteaga. “Just his unwavering, positive attitude as someone who sets out to achieve his goals and it is contagious for us.”

Another key returner on defense is sophomore nose guard John Burrow who made the most of his opportunity in the middle of the defensive line. “He was injured against Chanhassen last year and this year he really turned it on as a 15-year-old taking on double teams. We’re very excited about his next two seasons,” Foster said.

Having a strength program organized by Jen Gust is creating results in the form of fewer injuries while preparing the players to handle the daily load of a varsity football schedule.

“What she’s done is phenomenal,” Foster said of Gust and the new training area at the school. “She does great work. We had a lot of kids go both ways and finish the season strong.”

Looking back on what disappointed him the most about ending the season the way they did was not being able to complete the Oriole Circle tradition. After the last game of the season, the seniors are surrounded by the rest of the team and coaches one last time. “Everyone goes around and says thank you to the seniors,” Foster said of the tradition, which began with now Activities Director Andy Ewald.

The future for Park football is bright with the coaches and staff in place to build on the success and learning from 2020.