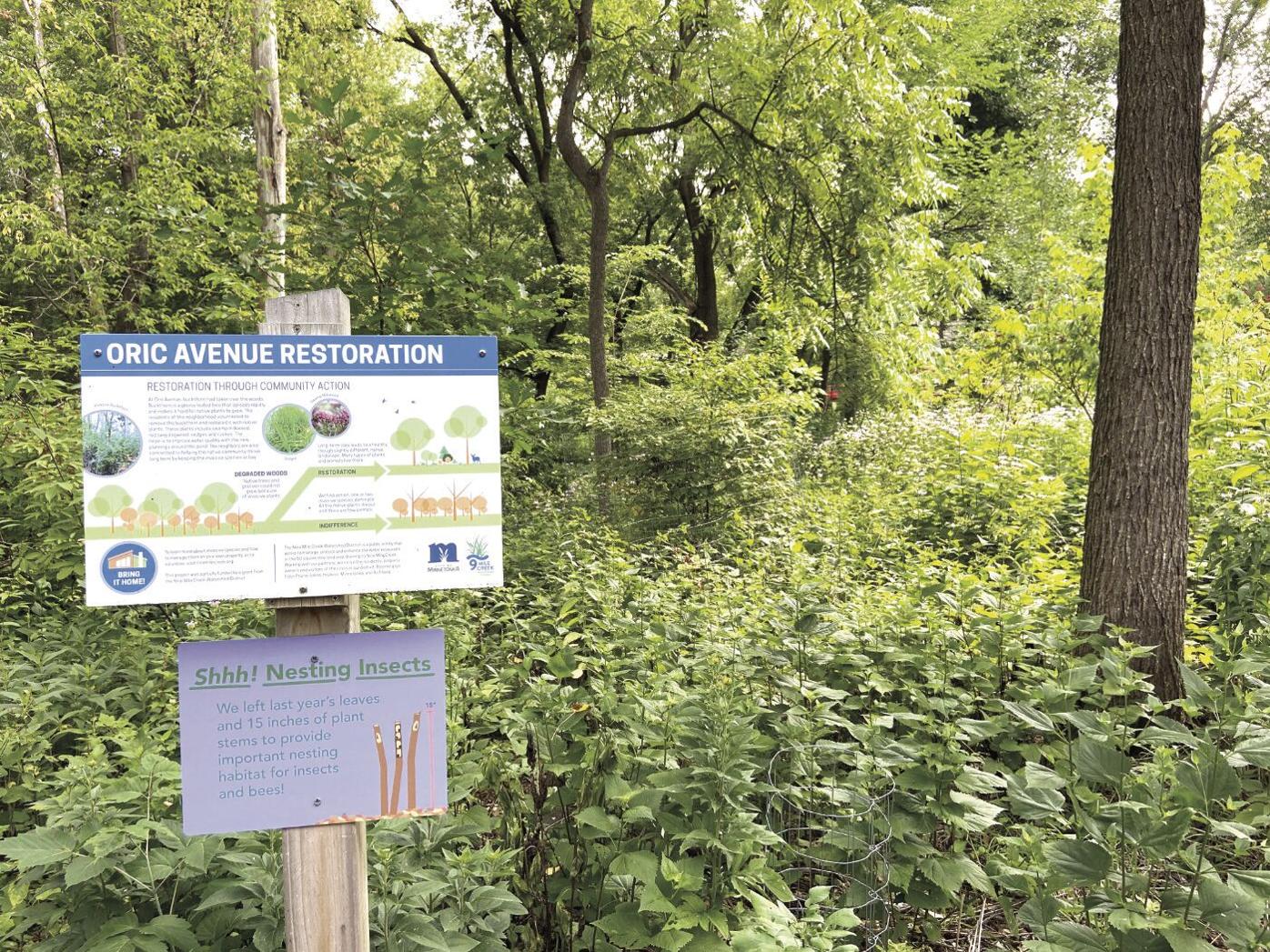 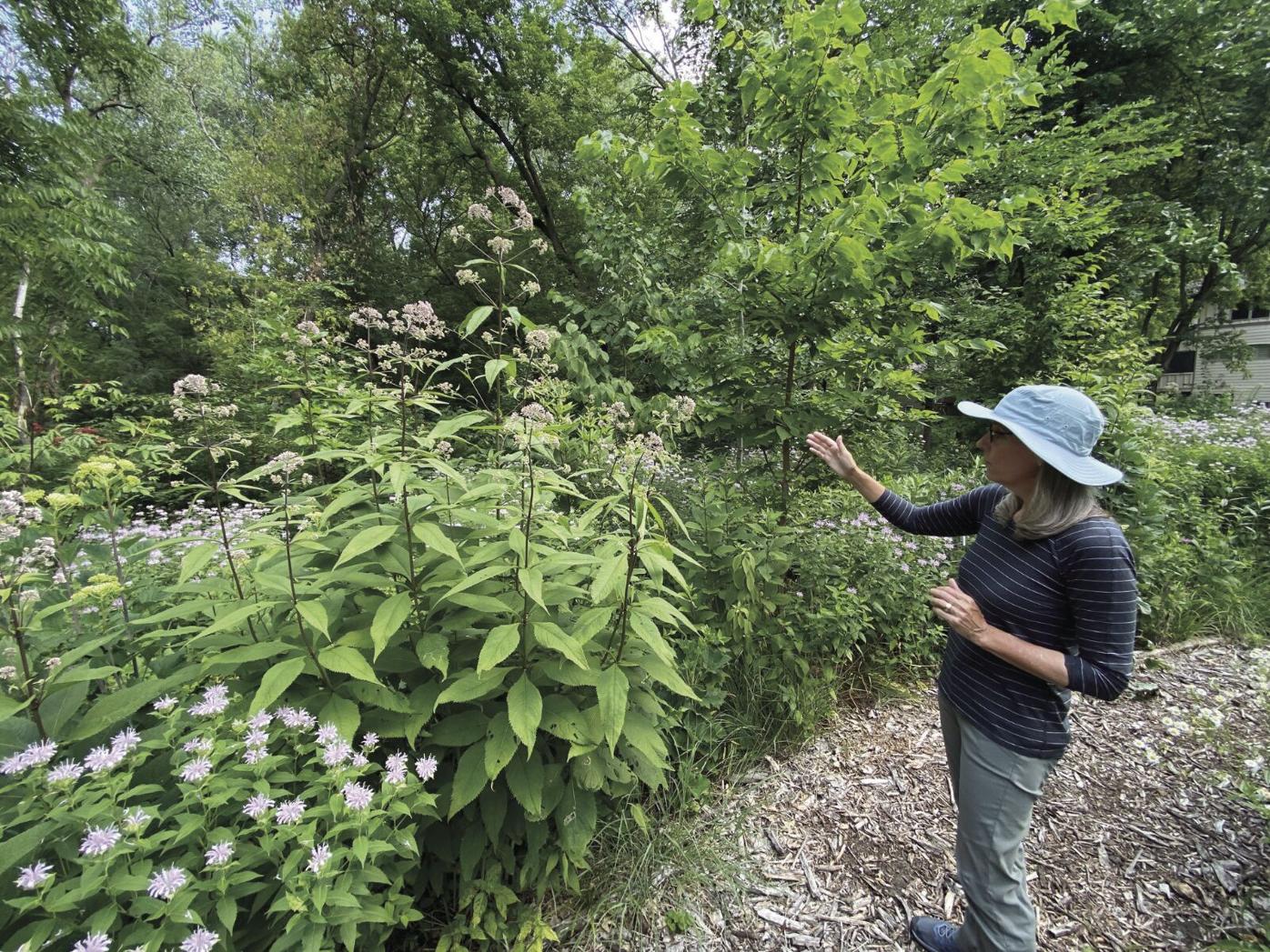 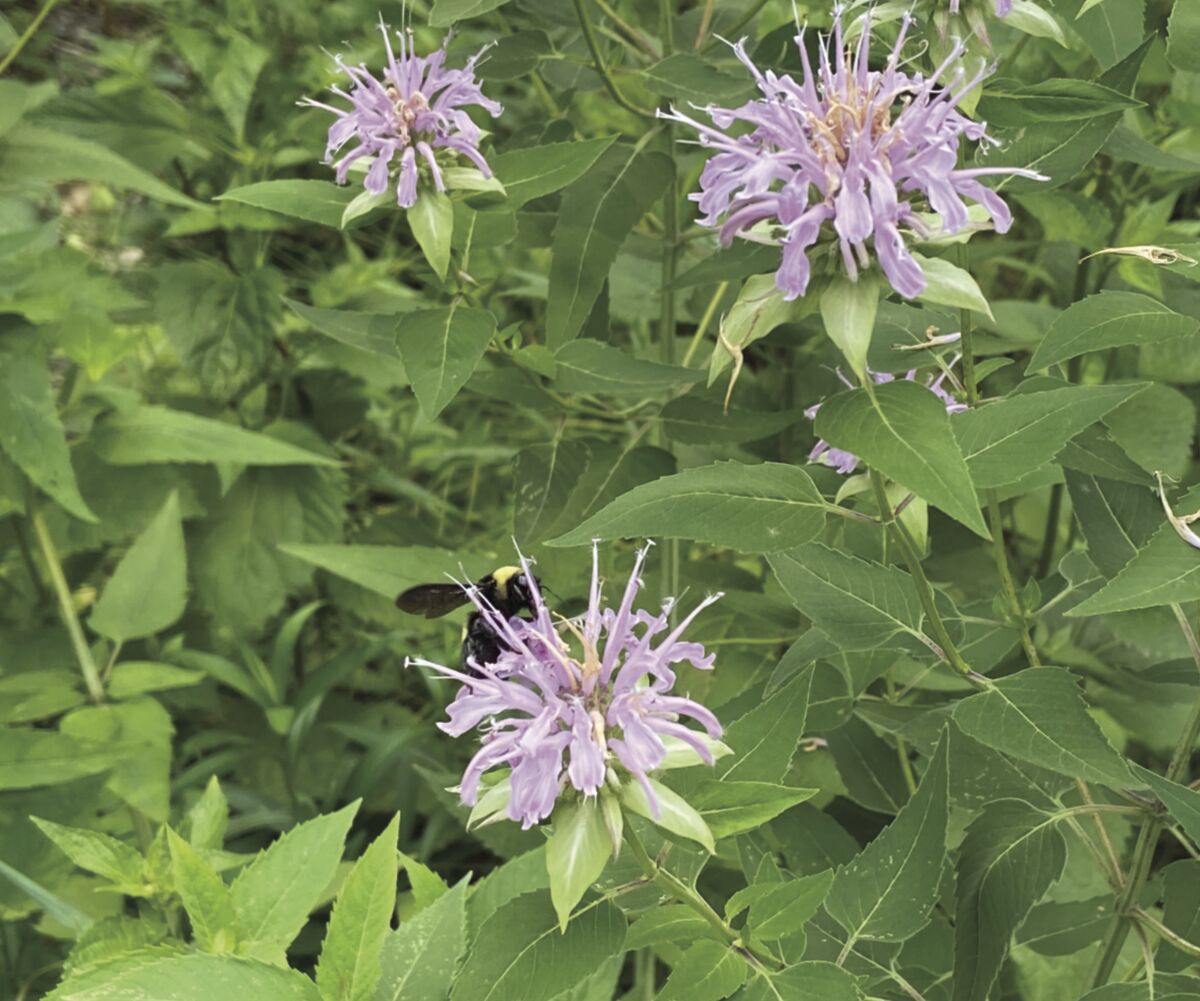 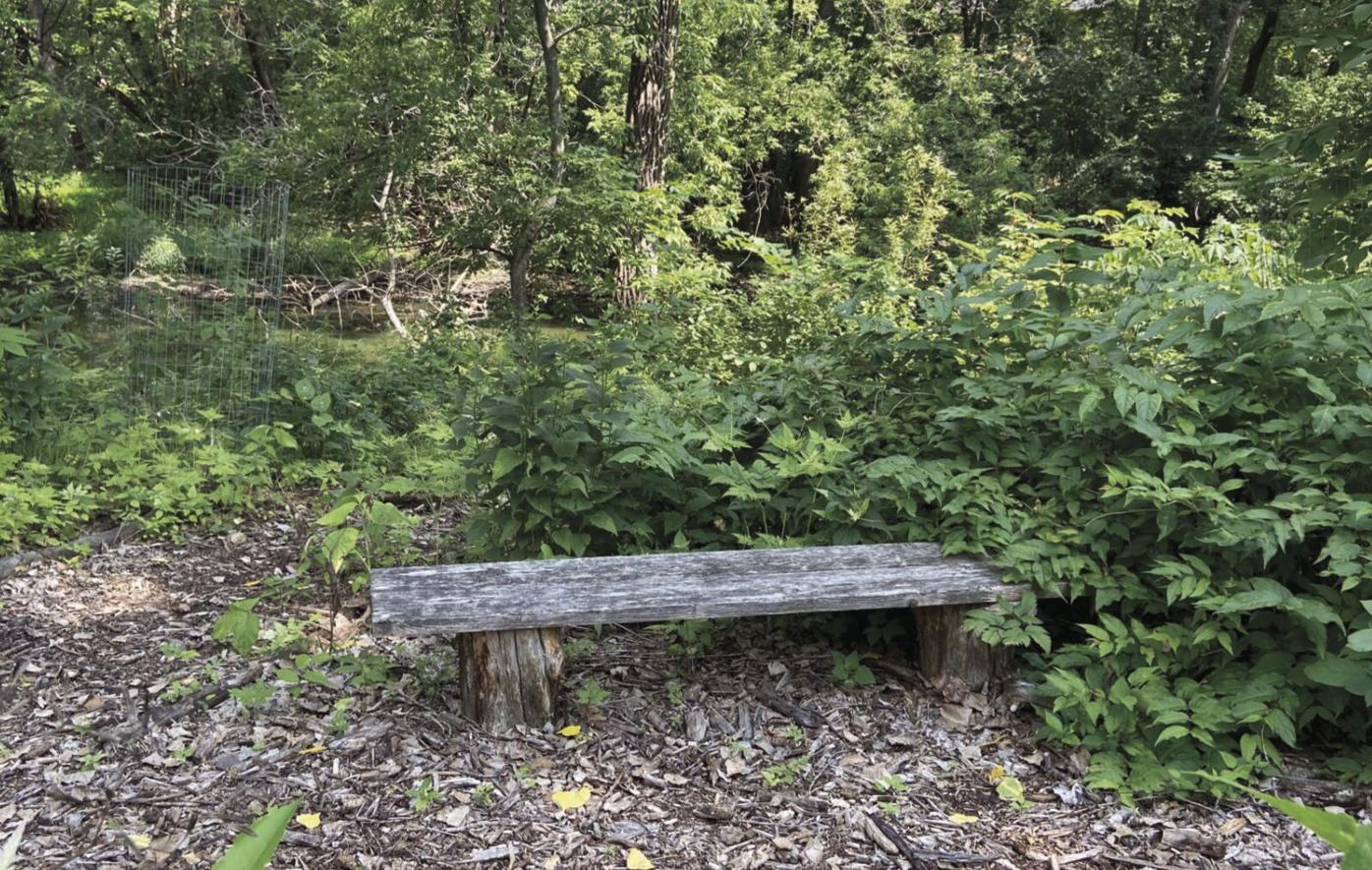 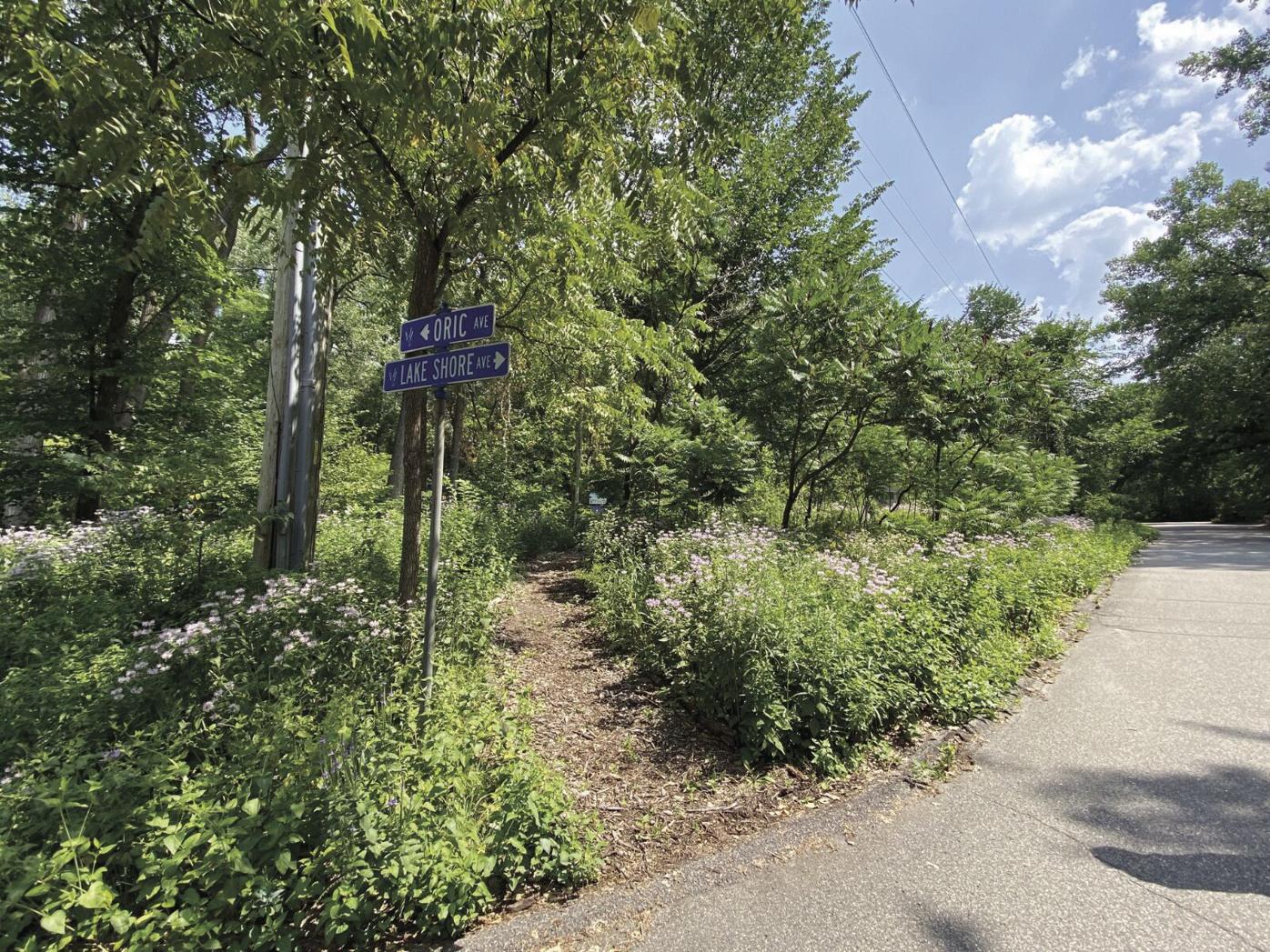 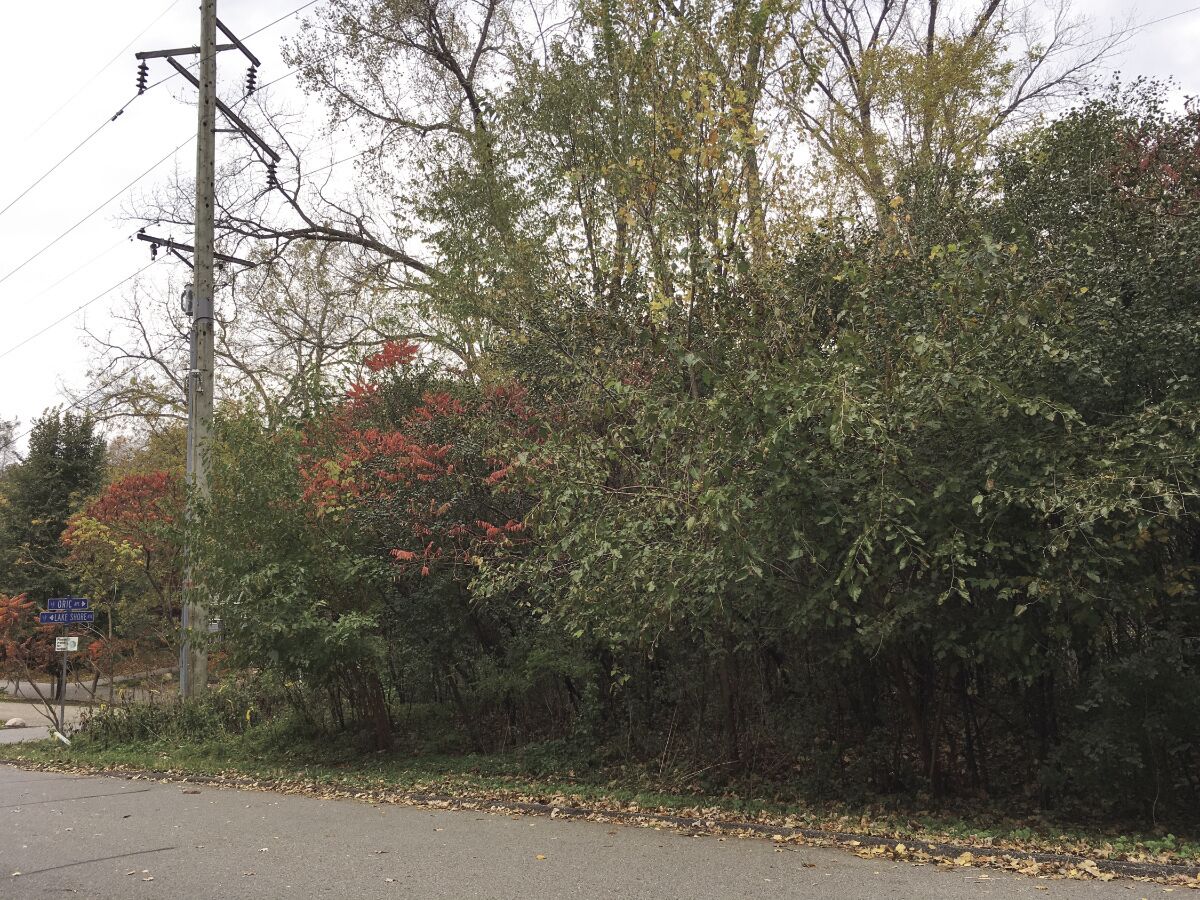 Once filled with invasive buckthorn, an outlot on Oric Avenue in Minnetonka is now buzzing with a diverse ecosystem of flowering native plants and pollinators thanks to a group of neighbors who restored the half-acre site.

Spearheading the project were Heather and Brent Holm, both of whom had a strong desire to clean up the lot that was “chock full of invasive plants” since moving to the neighborhood in 2004.

The couple has also been active restoration volunteers for the city of Minnetonka.

With a natural resources and biology background, Heather started the process by obtaining a grant through Nine Mile Creek Watershed District, along with city approval.

Neighborhood volunteers also provided a 25 % match through labor, which began with the removal of the invasive buckthorn.

The buckthorn was so thick that there was no ground cover at all, said Brent, noting that bare dirt is problematic because it easily gets washed away with a rain event.

They began in the fall of 2015, which is the best time to remove buckthorn because it’s easier to identify because the leaves stay dark green, while the native leaves change, Heather noted.

The following spring, they planted trees and shrubs and seeded the other areas with perennials and grass seed mix.

“One of the things we tried to do is make sure to bring oak species back because that’s one of our primary canopy trees,” she said, noting there were only four native tree species on the property, whereas now, there are 20.

“It’s all about really building and increasing diversity,” she recommended.

Another goal of the project was to improve water quality by eliminating erosion and preventing silt from entering into the pond onsite, which moves water from a chain of lakes.

To do that, they hired a shoreline restoration company and planted emergence plants to help filter the water.

Then they began incorporating a great diversity of native trees, shrubs and perennials, which also builds a habitat for birds and pollinators. This was done by carefully selecting flowering perennials that support a diverse amount of pollinators, she explained.

“Right now, we have wild bergamot in full bloom,” she said, pointing to the purple blossoms that are hopping with bees and butterflies.

“We’re thinking of this as a whole system,” Heather said. “Like the plant density, the root systems, the photosynthesis - that’s all helping to sequester carbon, whereas before when it was all invasive plants, there was likely a lot less carbon sequestration going. And the more we can pull carbon out of the atmosphere and get it into the soil, the better for climate change.”

This site also has a unique history.

The powerline on the property that runs east to west, sits on the old footprint of the trolley that went from Minneapolis to Lake Minnetonka at the turn of the century.

When they began working on the site, they also found a lot of garbage, such as metal bed springs and broken glass.

This worked to their advantage, however, as they collected the money from the metal to purchase cedar boards for the benches, where people can stop and enjoy their surroundings.

They were also careful to keep things that are habitat related, such as a moss-filled log lying on the ground.

“I’ve documented a ton of different bees, and some solitary wasps nesting in here,” she said. “It’s just like a whole other ecosystem.”

Not only has this become a great place for bees, butterflies and birds, but it’s also a relaxing spot for neighbors to enjoy.

Particularly during COVID as people started working from home more, it was “a really nice spot where they could come to walk a short distance and recharge from the stress of the world,” she said.

Ultimately, the Holms want to see Oric used as a teaching place as well, so that people learn from it and replicate it in other places.

“You don’t have to look too hard to find areas that need some restoration,” said Brent, who was also careful not to describe it as a garden.

“‘Garden’ implies a lot of maintenance and structure,” Heather said. “This is a dynamic space of carefully selected native plants that will change and evolve over time, but still provide that real functionality that we’re striving to achieve.”

“It does take a certain amount of work and intelligence about how to identify and remove the undesirable invasive plants, but once you get past that, it really gets to a point where it’s just a little bit of maintenance,” Brent said. “I feel like it’s less maintenance than a lot of people would put into their turf grass.”

“The big thing is to first identify what’s there,” Heather said.

Then, it’s having a plan.

“Because once you take buckthorn out of a site, whether it’s your backyard or a site like this, you need a follow-up plan, because new invasives are going to love that you’ve opened it up for them,” she said.

A detailed site assessment is also important, because different things grow depending on the soil type and sun exposure.

Now, Heather is trying to track the change in pollinator diversity over time, coming there once or twice a week to document what pollinators she finds.

When it was filled with buckthorn, there were very few species. The birds are even coming back to the site.

“We’re up over 120 different bees, butterflies and other flower-visiting pollinators,” she said, including nine different bumble bee species. “Hopefully we continue to build diversity.”

They would ultimately like the city to deem it a park and are awaiting that assurance.

“So that it is permanently preserved as open space, so people can learn from it, Heather said.

She also set up an iNaturalist project website, a portal that invited neighbors to come and take a picture of a plant, insect or a bird, and add it to the site.

Not only does it allow people to see what is there, but it’s also a way to track changes over time, she said.