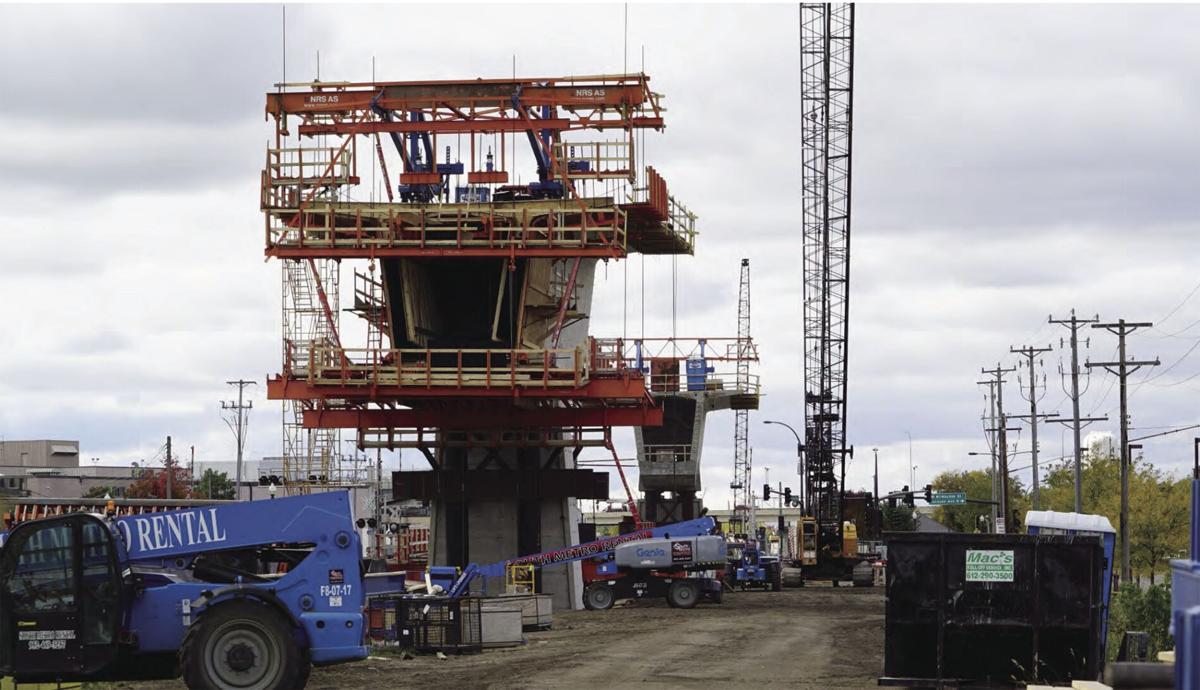 (IMAGES PROVIDED BY THE MET COUNCIL)

The piers for the light rail bridge over Excelsior Boulevard. Two more piers have yet to be constructed. 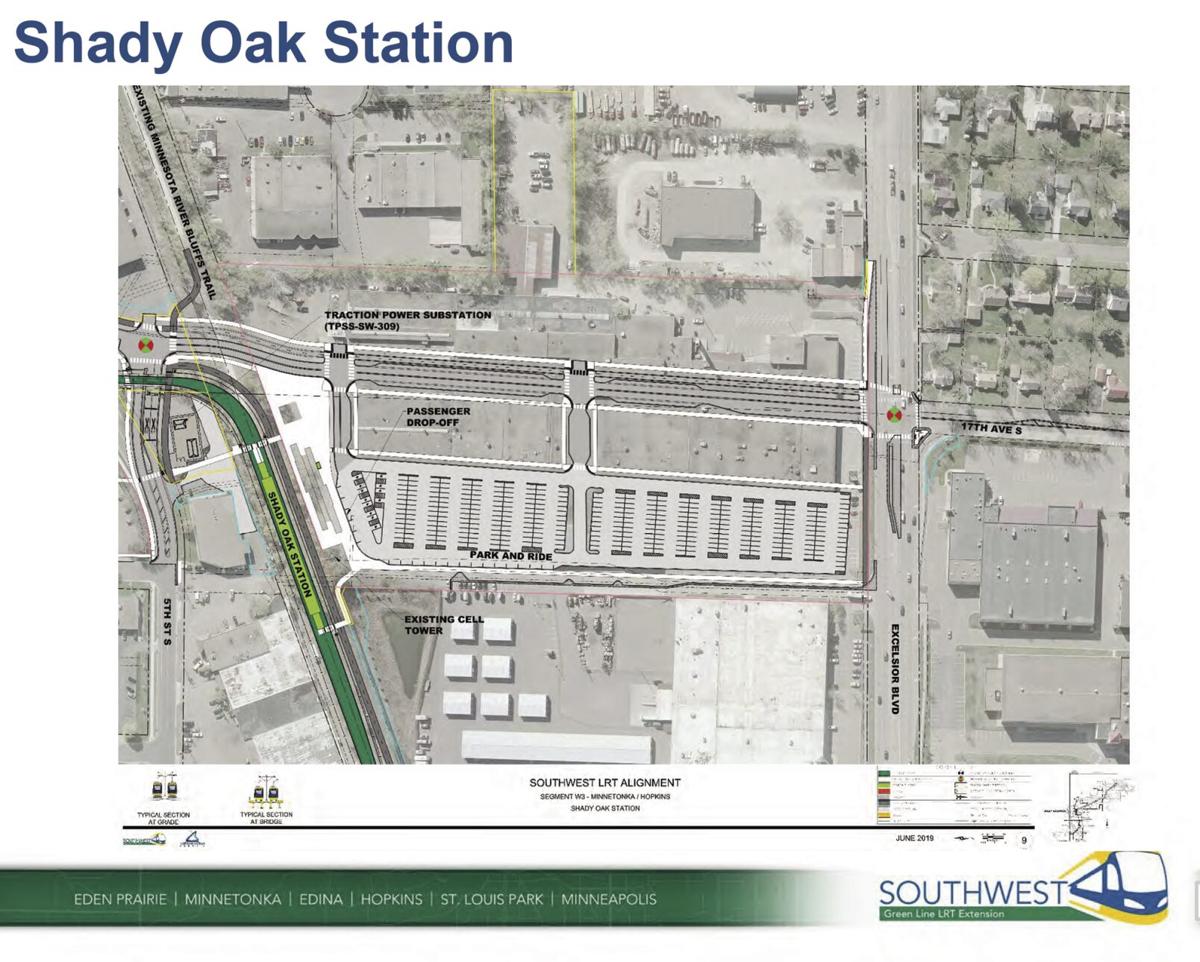 The Hopkins City Council has asked the Met Council to work with city staff members to reconsider the proposed 1,000-stall parking lot adjacent to the Shady Oak Station.

(IMAGES PROVIDED BY THE MET COUNCIL)

The piers for the light rail bridge over Excelsior Boulevard. Two more piers have yet to be constructed.

The Hopkins City Council has asked the Met Council to work with city staff members to reconsider the proposed 1,000-stall parking lot adjacent to the Shady Oak Station.

An update on the Southwest Light Rail Transit was presented Oct. 6 to the Hopkins City Council.

Jim Alexander of the Met Council started by recognizing the Full Funding Grant Agreement from the Federal Transit Administration, $928.8 million that will cover nearly half of the $2 billion project.

“We really appreciate the city’s efforts in helping us on that long journey,” Alexander said.

Since the construction of the project began in November 2018, construction crews have been building tunnels, bridges and stations along the 14.5-mile line. There will be 16 stations serving Minneapolis, St. Louis Park, Minnetonka and Eden Prairie, including three stations in Hopkins at Shady Oak, downtown and Blake Road.

Currently, construction is taking place with the regional trail underpass under Blake Road, which has caused quite a bit of traffic disruptions, Alexander noted.

“We had a lot of utility challenges here that we had to grapple with,” he said, which is why it’s taking more time than anticipated.

This part should be done shortly, he said, with work on the other section of the tunnel starting with the 2021 construction season.

Alexander also talked about the Excelsior Boulevard crossing, which he called a “premier bridge on the project.”

“If you haven’t noticed this, you’re not looking,” Alexander said commenting on its expansive size of the pier tables, which is needed to span over Excelsior Boulevard.

There are two more pier tables yet to be constructed, he said.

Work on this portion of the project will continue through 2021.

Reconstruction of Fifth Avenue continues and will be ongoing through the fall.

The structure of the Shady Oak Station is also set to begin later this month, which will include a rail support facility and an adjacent 1,000-stall parking lot.

This was originally anticipated to be an operations maintenance facility but due to budget considerations was taken out of the project, he said.

“We have anticipated on the order of about 70 jobs that would be associated with [the rail support facility],” with design on that starting in 2021, with the involvement of city staff, he noted.

Councilmember Alan Beck asked to reconsider the development of the 1,000-stall surface parking and suggested a ramp would be better suited in order to reclaim some of that property for future development.

Alexander agreed a ramp would be better but said a funding agreement would have to be worked out as there currently aren’t funds for a ramp.

Through necessary budget revisions for the light rail, the project scope was revised to eliminate the operations and maintenance facility in Hopkins after the land was already purchased, according to Kersten Elverum, the city’s director of economic development and planning.

In order to use the property to support the overall light rail project, parking capacity at other stations was eliminated and added to the Shady Oak Station. The result is an increase in the surface parking at the Shady Oak Station, from the approximately 700 stalls, for which the city originally gave municipal consent.

Councilmember Rick Brausen agreed the size of the surface parking lot should be reconsidered.

“What you’re showing us today is beautiful progress, and this is such a great thing for the city of Hopkins,” Brausen told Alexander. “I like everything I’ve seen except the 1,000-car parking lot.”

Since this portion of the project hasn’t been designed yet, Brausen said now would be for review.

“I just think that this would be a great opportunity for us to dig a little deeper and see what we can come up with for that,” he said.

After Alexander’s presentation, Elverum noted that Hopkins residents, for the most part, are extremely supportive of the light rail project, “but occasionally, we will hear from people that just don’t imagine that they’ll ever use it and they don’t necessarily realize what the benefit will be to the community,” she said.

Elverum noted the interest from developers due to the investment in the light rail, such as the proposed Blake Road Station, a mixed-use residential and commercial development adjacent to the light rail station. The planning commission and council will consider land use approvals at the October and November meetings.

“For those that may be a little skeptical about the benefits to Hopkins, I just want to emphasize that we are already seeing that,” Elverum said. We really expect that this will continue to be something that draws people and allows us to increase our tax base, which I think everybody benefits from.”

The light rail is expected to be operating in 2023.