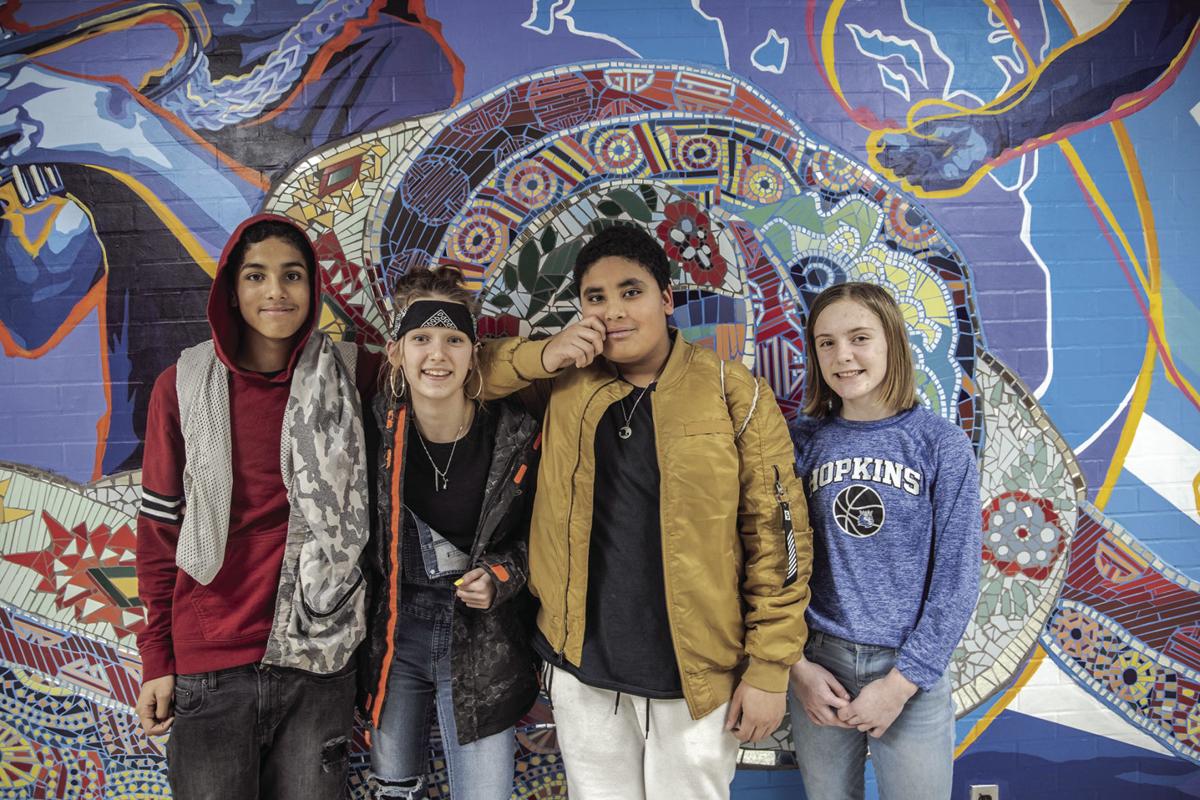 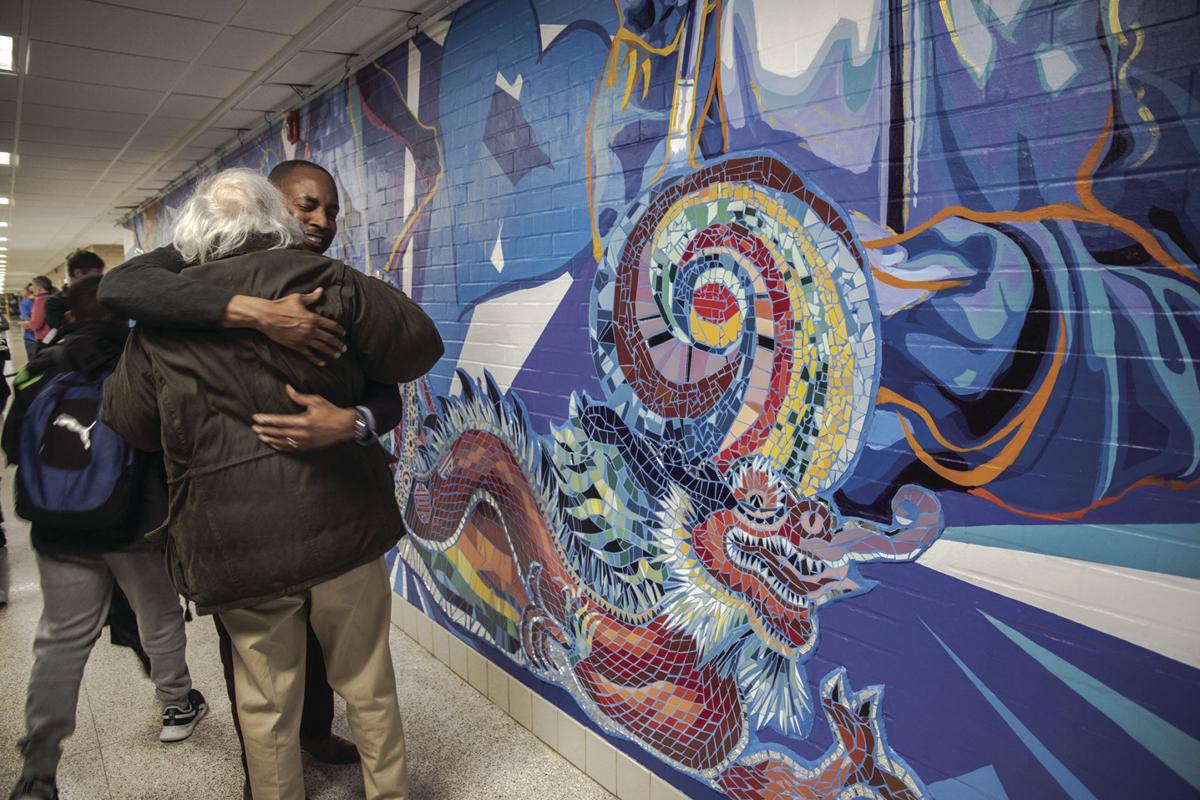 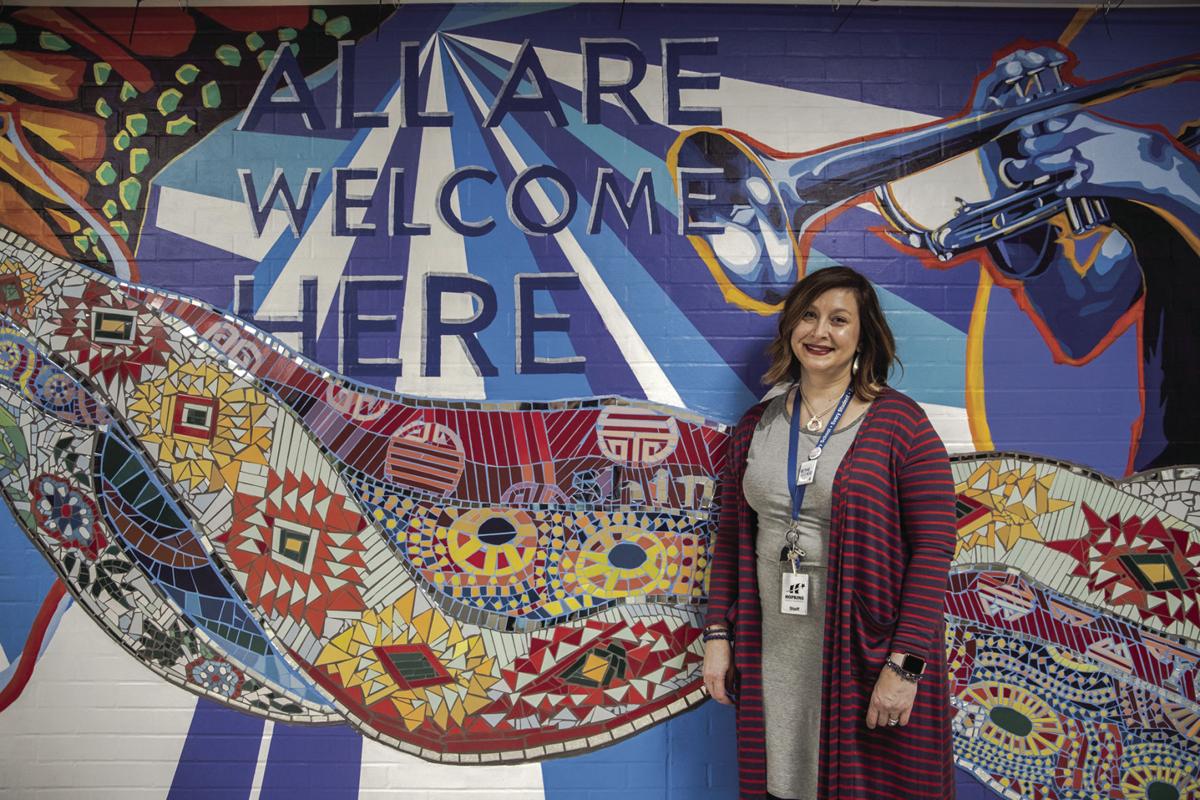 Principal Leanne Kampfe is pictured in front of a new mural at West Junior High School in Hopkins. Kampfe said the intention behind installing the mural and its “All Are Welcome” message was to foster a sense of community and to demonstrate through action the importance of making each individual’s personal story visible. 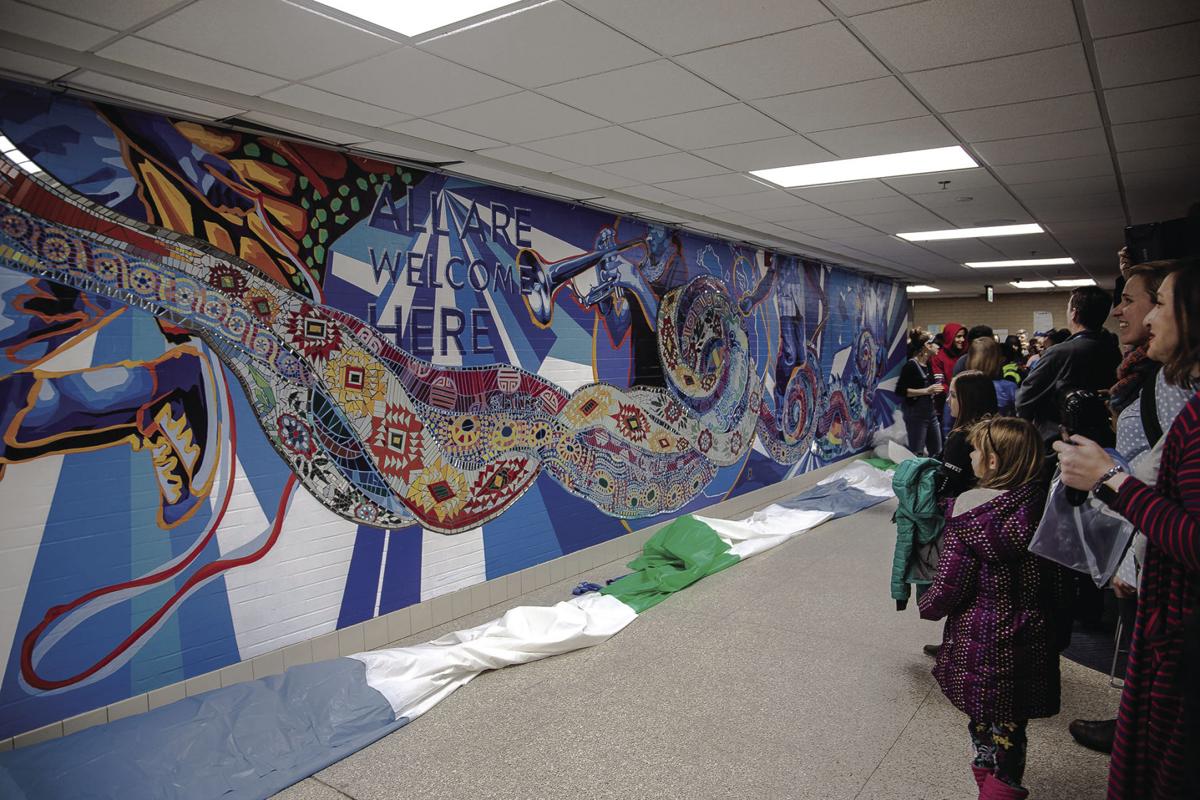 A crowd of students, teachers, administrators, parents and neighbors of West Junior High in Minnetonka packed a corridor Jan. 17 to celebrate a ribbon cutting for the school’s new mural, created by students, faculty and local company Good Space Murals.

Principal Leanne Kampfe is pictured in front of a new mural at West Junior High School in Hopkins. Kampfe said the intention behind installing the mural and its “All Are Welcome” message was to foster a sense of community and to demonstrate through action the importance of making each individual’s personal story visible.

A crowd of students, teachers, administrators, parents and neighbors of West Junior High in Minnetonka packed a corridor Jan. 17 to celebrate a ribbon cutting for the school’s new mural, created by students, faculty and local company Good Space Murals.

After months of planning and collaborative work, Hopkins West Junior High School has a new hand-painted, mosaic mural stretching through a corridor near the front entrance. The work of art was unveiled during a ribbon-cutting ceremony Jan. 17, and it bears a critical message: All are welcome.

Principal Leanne Kampfe wanted that message to ring through the halls of the school loud and clear. The mural announces it prominently on its far left side, directly visible as people enter the building.

Kampfe said the inspiration for the mural came from seeing a brick display at another area school that delivered a similar message of equality. As the former principal at Roosevelt High School in Minneapolis, she recalled that school working with a mural company, Good Space Murals, who helped conceptualize and create the art.

One major selling point for working with Good Space, she said, was the fact that they involve students and staff members in the creation process. As a district with a high open enrollment rate and a diverse student body and faculty, she immediately saw an opportunity to not just tout the welcoming message, but act on that message.

The mural started taking shape in August, with students and staff members providing input throughout the entire process of drafting an initial sketch. Some students even contributed drawings that made it into the final piece.

The school began hosting paint parties with the professional muralists, who invited participants to take part in the creation. Students, faculty, staff, and parents were able to take part in as little or as much as they desired over a two-week creation period. Kampfe said the mural is like wallpaper, with a composite of numbered sections prepared before plastering the entire piece on the wall. Good Space completed the application process while the district was on the winter holiday break, and the community ribbon cutting commemorated the hard work put in to make it come to life.

As the ribbon was cut, audible gasps, cheers and applause were heard throughout the corridor, which was packed with parents, students, staff members and neighbors. Children and adults alike approached the wall with a sense of wonder, stroking its mosaic textures and identifying portions they worked on themselves.

Kampfe worked with the organization behind the popular “All Are Welcome” yard signs, which feature the mantra in several languages that also happen to be widely spoken at West Junior High. She felt it was important to create opportunities for people who might not normally interact to come together and genuinely embody the principle that all are welcome.

“They’re just signs if we don’t live it, if we aren’t really doing things to make all people feel welcome,” she emphasized.

Several students said they found unanticipated joy and new friendships through their participation in the mural’s creation and reflected successes in Kampfe’s goal of unity.

Eighth-graders Abby Hoiska, Alyssa Forcad, Marcos Smith and Donovan Smith were heavily involved in the creation process, participating in many of the paint parties. For the most part, their own friends invited them, but they left with new friends they hadn’t yet ventured to talk to.

Forcad said it was a way to bring people together since social turmoil can play a factor in junior high life.

“It was something we enjoyed making, so it was a fun thing to get new people together and meet new people,” she said.

“The message about it is about having fun with your friends and putting something together as a group, and as a community,” Marcos Smith added.

All four students said they felt like it was a rewarding experience. Forcad and Marcos Smith said the two of them grew closer as friends, started talking to each other more.

Kampfe said living the unity message through both the mural’s creation and hosting a ribbon-cutting ceremony serves as a reminder of every person’s humanity.

“We dehumanize each other, we think of people as groups and stereotypes instead of realizing every human has a story. I felt like this opportunity was a chance for us to start learning each other’s stories.”