(IMAGES COURTESY OF CITY OF HOPKINS)

The Beard Group has submitted a draft proposal as part of a concept plan review for the former Mann Hopkins Cinema 6 site along Mainstreet. The draft includes 130 dwelling units, two floors of underground parking and a surface-level parking lot. 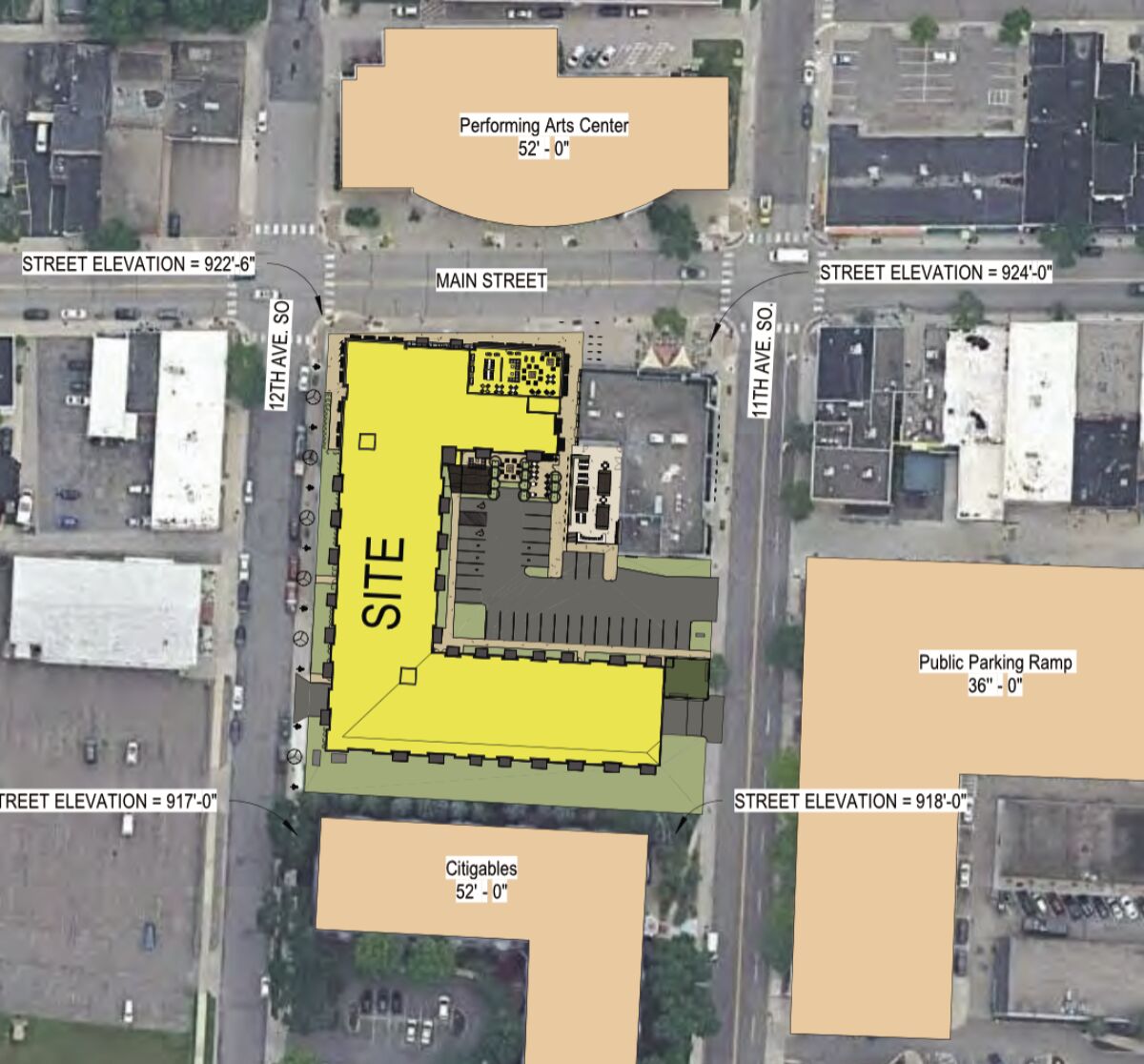 The Beard Group proposal shows the proposed development site along Mainstreet between 11th and 12th Avenues.

A concept plan for a mixed-use development for the former cinema site came before the Hopkins City Council April 6. Council and staff members expressed concerns with areas that don’t meet city zoning standards.

The concept plan review process allows a developer to receive feedback on a proposed development from the Planning Commission, City Council and community and to make changes before submitting a formal application.

The developer/owner is The Beard Group, which owns the former cinema and adjacent spaces, including Thirty Bales, along Mainstreet between 11th and 12th Avenues. The group is proposing an apartment building, with ground-floor commercial space along Mainstreet, apartments on the level above and two levels of parking, with one level underground and one level fully/partially above ground on three sides of the building).

In December, after the closure of Mann Hopkins Cinema 6, the developer submitted a proposal for a four-story mixed-use development, with ground-level retail below luxury, market-rate apartments.

The current proposal is slightly different in architecture, name and retail space.

The first floor includes 3,155 square feet of commercial space on Mainstreet and adjacent to the Thirty Bales restaurant.

The plans do not include an affordable housing component and no tax-increment financing money is being requested.

The apartments include 59 one-bedroom, 16 one-bedroom plus den, 19 two-bedroom and 36 studio units.

Jason Lindahl, the city planner, noted significant modifications were made to the Mainstreet side of the building compared to the original concept design. The most notable change away from Art Deco exterior architecture. However, Lindahl identified several areas where the proposal doesn’t meet the current zoning standards including the density, height, exterior materials and make-up of the commercial space.

Height and density appear to be the largest factors.

While the applicant can seek variances for these items, Lindahl explained that a planned unit development process would be the “most likely path for success” and a variance “would be a heavy lift” for the items that don’t meet the zoning standards.

A planned unit development allows flexibility from traditional development standards in return for the applicant creating a higher-quality development. Typically, the city allows deviation from some standards while the developer exceeds other zoning standards, building code requirements or meets other goals of the comprehensive plan.

The name also has changed and likely will again, noted Bill Beard, the owner and applicant.

No longer Hopkins Cinema Flats, Beard said he is considering Harley on Mainstreet in honor of Harley Hopkins, one of the city’s earliest pioneers.

The Hopkins Planning Commission reviewed the concept plan in March and had a “lengthy discussion,” though there wasn’t a clear direction or a lot of consensus from the members, Lindahl reported to the council.

“They were disappointed to see the theater go, but were encouraged by the level of investment that the developers potentially going to make here,” he said.

Beard addressed the sentiments of the commission and community on keeping the space operating as a cinema.

“Since we’ve closed the theater, we haven’t taken one call from any theater exhibitor, who has said ‘we’d like to get into that location and operate there,’” Beard told the council.

He explained how a change with the streaming of movies has contributed to the decline of the theater business.

“I think that movie theaters will go through a resurgence – it’ll be somewhat different – and people who are smart about that industry ... can probably give us some guesses of how that might look,” Beard said.

Mayor Jason Gadd said he would like to see the building height come down a bit on the south side, which would ultimately reduce the density.

Councilmember Brian Hunke said he wasn’t as concerned about the height as he was about the material used on the exterior of the building.

“I want to make sure we’re using the right materials and really make the building flow,” he said, suggesting the use of brick on all sides.

Hunke also said he would like to see more two- and three-bedroom units and fewer studio units.

Beard’s responded by explaining that three-bedroom units are “very difficult to lease” and that studio apartments tend to be leased by single women between 55 and 70.

Councilmember Rick Brausen said he was encouraged by the proposal but suggested taking the necessary time to get the plan right.

“I consider us lucky in losing the theater that we have the owner of the property is a group that we’ve worked with before. It’s a group we’ve had successful development with,” said Brausen, referring to the Marketplace and Main Apartments on Mainstreet and Seventh Avenue.

Brausen suggested this project would need more discussion in the concept review before the council taking action on a formal application and suggested a future work session after the developer revises the plan.

“And now that may sound painful to you, but what sounds painful to me is if we can’t make this work ... the possibility of this property sitting is more scary to me than having extra conversations to get it right this time,” Brausen said. “I believe in our ability to get this right this time. But I’m asking for patience from people to go through the process.”