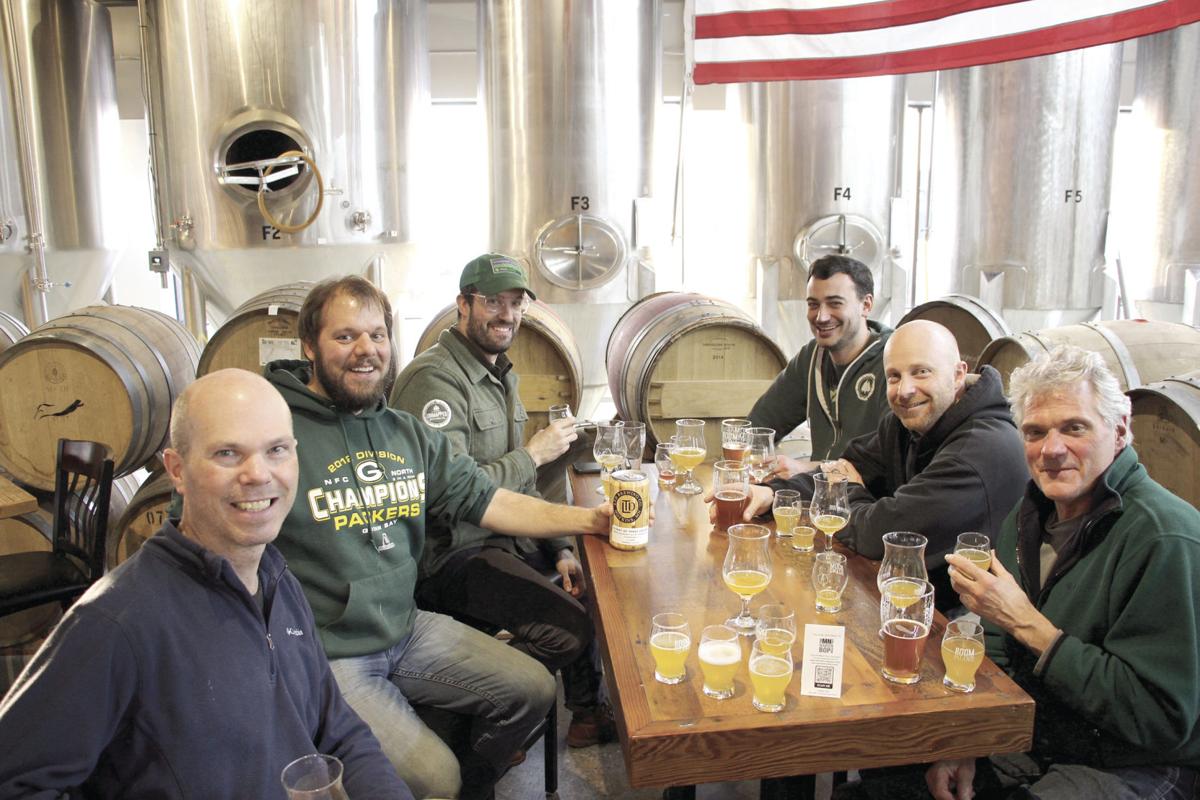 Brewers of the Flight of 3 collaboration sit around the table at Boom Island Jan. 9 tasting their newly released beer. They are Kevin Welch of Boom Island, Jeremy Hale of LTD Brewing, along with Tuck Carruthers, JD Park, Derek Allmendinger and Ken Fischer from Unmapped Brewing. 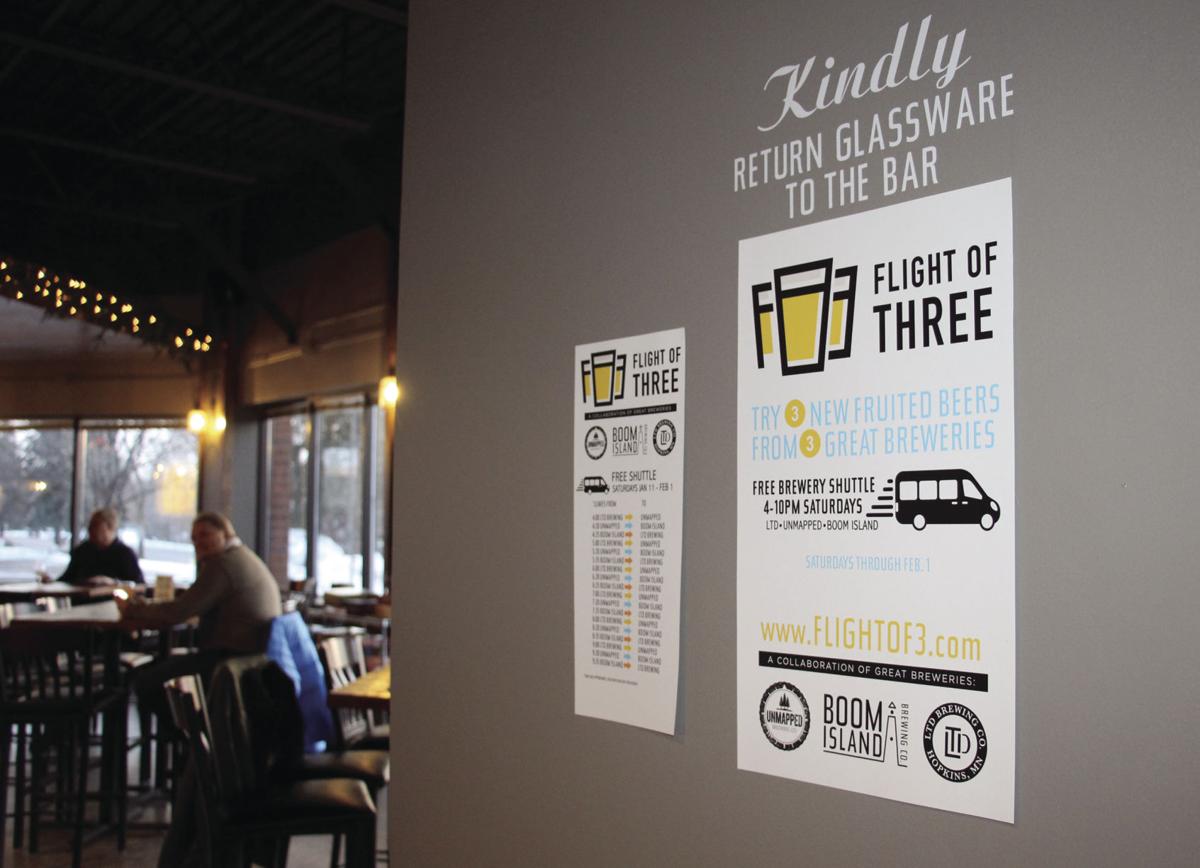 As part of the Flight of 3 collaborative, the breweries are offering a free shuttle 4-10 p.m. every Saturday through Saturday, Feb. 1 to each of the breweries. Check flightof3.com for pick-up times. 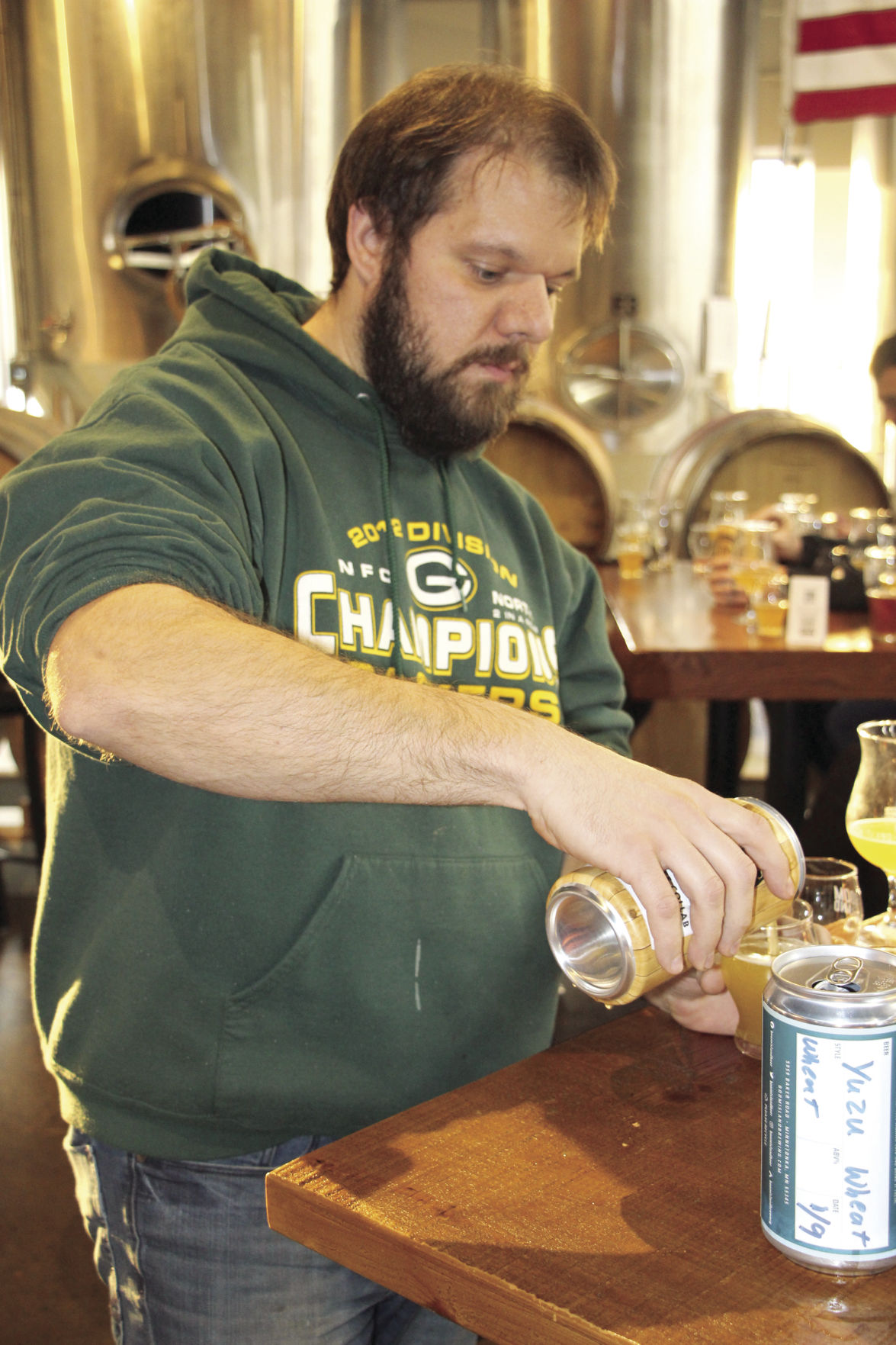 The three breweries in Hopkins and Minnetonka have come together to release the Flight of 3, a collaboration of three distinct brews that are ready for release Saturday, Jan. 11.

Collaborating on what they hope will become a quarterly tradition are Unmapped and Boom Island in Minnetonka and LTD Brewing in Hopkins.

The “catalyst” for this three-beer collaborative event among brewery neighbors came about not long after August, when Boom Island moved to Minnetonka.

They each started with the same base recipe – a 50/50 blend of wheat and pilsner, that gives a “dense, hazy visual,” said Tuck Carruthers, brewer for Unmapped Brewing. “I’d say it has a nice crisp characteristic to it.”

Then, each of the breweries “called dibs” on what fruit they would add to their brew to create three distinct flavor profiles.

As the brewers sat around the table at Boom Island tasting each of the new brews, they were reluctant to pick a favorite, however, each of them was pleased with the outcomes.

“I think if you asked a brewer if they’re happy with the beer, they’re always excited to brew it again to see where they can improve on, but I think for all of us setting out to brew the same beer, we’re pleasantly happy with how close we were,” said Carruthers.

“The fruit starts off subtle and it really becomes apparent about midway through the taste, and then it kind of finishes pleasantly with some sweet fruit and some of that lingering wheat flavor,” Carruthers said of the apricot.

Because of the “nice complexities from the German floor-malted wheat,” Welch said he was careful not to overpower that flavor with the fruit, rather using the fruit to complement the flavor.

“It’s just a slight highlight of citrus,” he said of the yuzu.

Jeremy Hale of LTD said his goal was to “let the fruit shine.”

“We like to do tropical in the winter,” he said.

The wheat beer is also a nice lighter version “that’s easily differentiated” from the heavier beer commonly brewed this time of year, Park said, with each beer being around 5.2% ABV and 20 IBU.

And the free shuttle, set to run every 20 minutes, makes it safe and convenient so people don’t have to drive between the three breweries as part of the events.

“I think it’s pretty cool that we have three breweries so close now that makes it able for people to brewery hop, which is something you couldn’t really do in the suburbs,” Park said. “Now there’s a lot of options – a lot of good options – for people to try, and we just wanted to showcase that there’s a real sense of collaboration and camaraderie between the three of our breweries specifically, but in general, that’s what this industry is all about.”

Flight of 3 shuttle between LTD Brewing in Hopkins, Unmapped Brewing and Boom Island in Minnetonka.

Where: Shuttle runs every 20 minutes between each of the locations.

Info: Check flightof3.com for pick up times. A limited quantity of crowlers will be available.

Flight of 3 shuttle between LTD Brewing in Hopkins, Unmapped Brewing and Boom Island in Minnetonka.

Where: Shuttle runs every 20 minutes between each of the locations.

Info: Check flightof3.com for pick up times. A limited quantity of crowlers will be available.