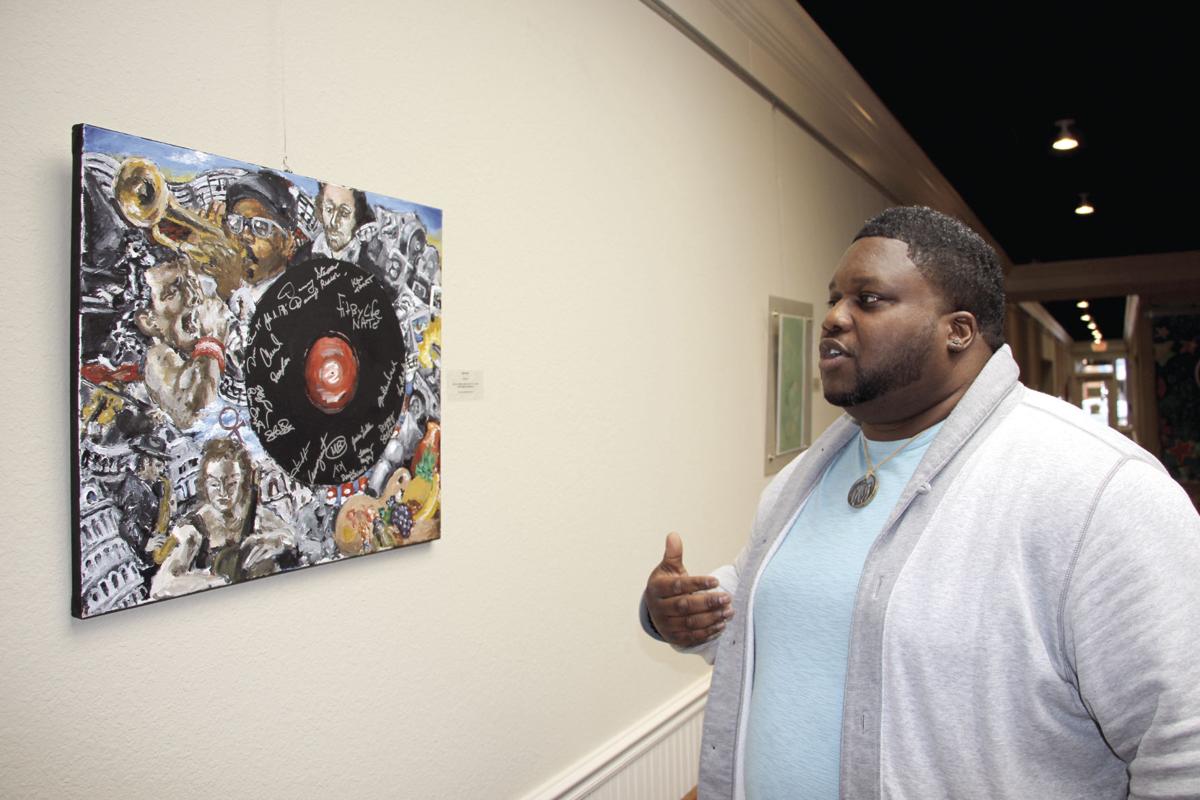 Curator Dominique Pierre-Toussaint explains a definitive piece of art created for the gallery. The piece is titled “Rhythm,” by twin sisters Marcjanna and Izabela Taylor, both juniors at Hopkins High School. The piece shows the various forms of art, including painting, photography and music. 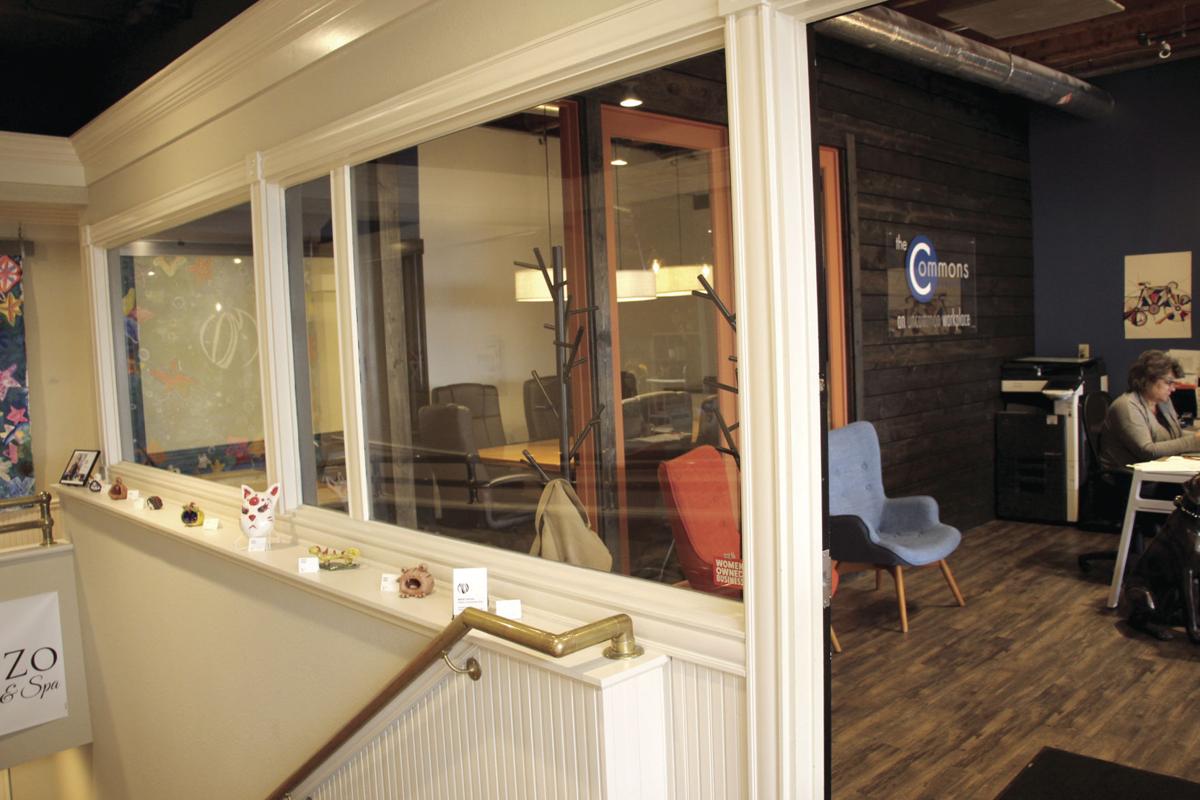 The Blank Canvas Art Gallery, featuring a variety of local art, is in the hallway of The Commons, a co-working space located at 915 Mainstreet, Hopkins. It will be open through June. 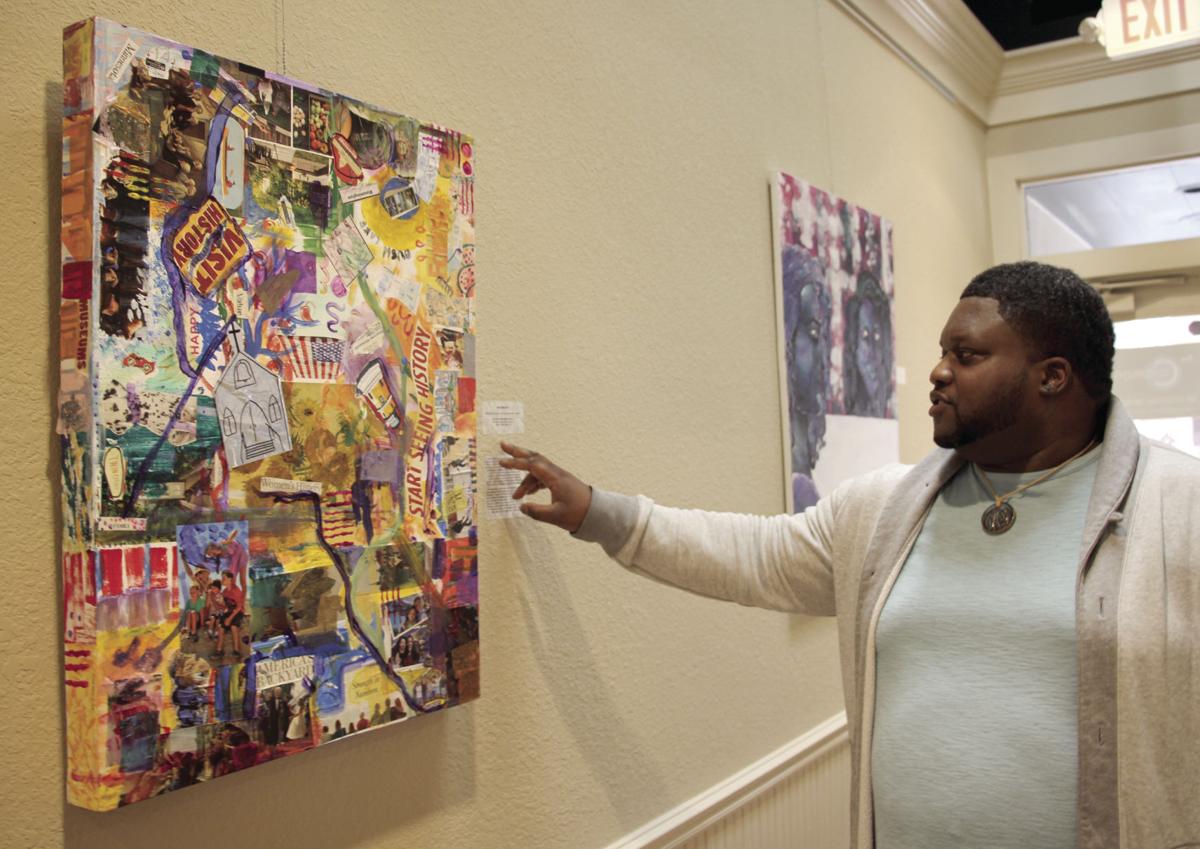 Blank Canvas Arts curator Dominique Pierre-Toussaint shows a piece of artwork in the gallery that was made by adults at the Augustana Open Circle Adult Day Center in Hopkins and facilitated by an art therapy graduate student. 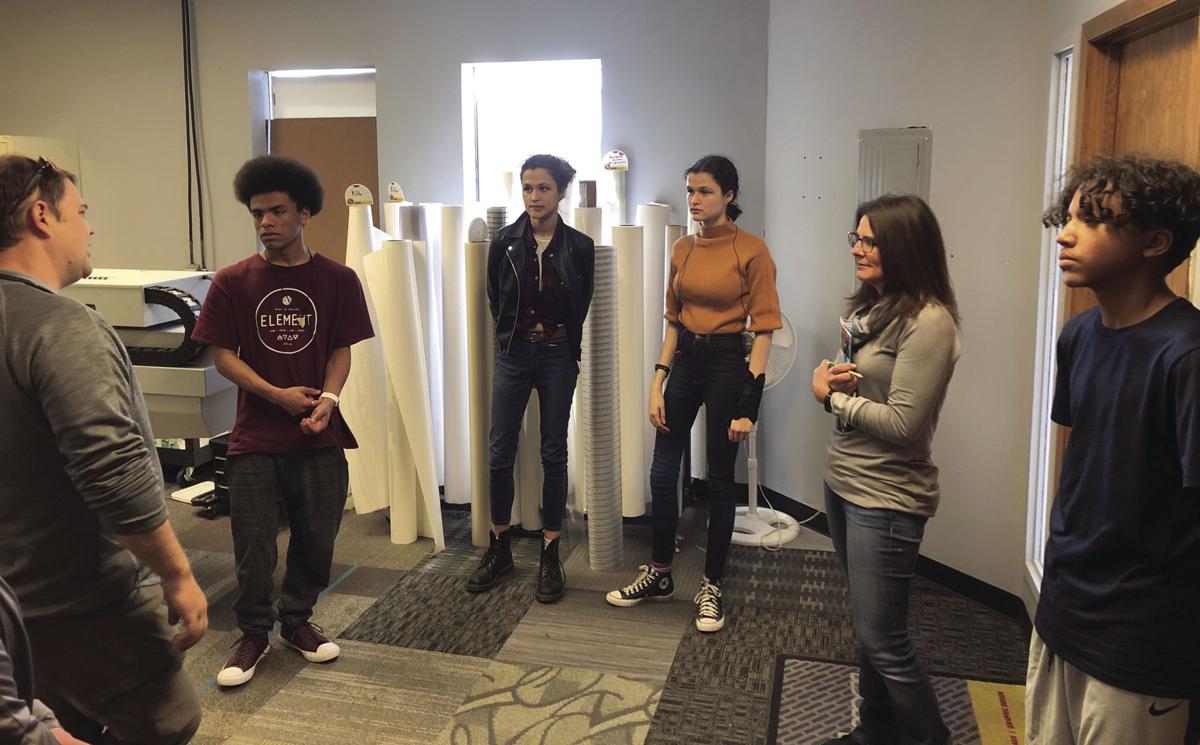 Curator Dominique Pierre-Toussaint explains a definitive piece of art created for the gallery. The piece is titled “Rhythm,” by twin sisters Marcjanna and Izabela Taylor, both juniors at Hopkins High School. The piece shows the various forms of art, including painting, photography and music.

The Blank Canvas Art Gallery, featuring a variety of local art, is in the hallway of The Commons, a co-working space located at 915 Mainstreet, Hopkins. It will be open through June.

Blank Canvas Arts curator Dominique Pierre-Toussaint shows a piece of artwork in the gallery that was made by adults at the Augustana Open Circle Adult Day Center in Hopkins and facilitated by an art therapy graduate student.

Art has been a powerful influence throughout Dominique Pierre-Toussaint’s life, particularly when he was a child growing up in a poor community in Queens, New York.

The community engagement supervisor is hoping to give youth in the Hopkins School District the opportunity to foster their love for art and explore potential careers in art through a new program called Blank Canvas Arts.

This new project is somewhat of a continuation of one started four years ago with Hopkins elementary and junior high students, called Minnesota Youth Community, in an effort to “help kids that are in diverse areas experience more art,” Dominique said.

Now, as those youth are in their first years of high school, Dominique wanted to create a new program geared toward career exploration and provide an outlet to showcase their talents through the Blank Canvas Arts Gallery, which recently opened to the public at The Commons, a co-working space at 915 Mainstreet, Hopkins.

Dominique’s inspiration for encouraging youth to explore art goes back to his own childhood, growing up in Far Rockaway, a neighborhood in the borough of Queens.

Raised by a single mom of Haitian and Dominican descent, Dominique had to grow up fast, he said, becoming a translator for his mom and taking care of his younger sister.

“In my position right now, I see a lot of that in this community,” he said.

As a 9-year-old growing up in the 80s, Dominique began expressing his creativity through various mediums, such as rapping, break-dancing and graffiti.

The graffiti caught the attention of Mr. Smalls, who ran the after-school program at Dominique’s daycare.

Concerned that young Dominique was defacing property and could get into trouble with the law, Smalls offered the boy a large white wall in his classroom as a blank canvas.

“[He] was the first person that actually took note of my artwork,” making him understand that it truly was art, Dominique said.

“At that time, I just enjoyed drawing,” he said, noting he would sit in class and sketch all day.

“During that time, in the area that I was in, education wasn’t great,” he said, noting the quality of education wasn’t anything that is found in the Hopkins community today, describing worn-out textbooks and high turnover of teachers.

“If I had this education here going at that time, it’d be a little different,” he said. “But I don’t regret anything that has happened to me because it actually made me grow and understand to appreciate.”

He attributes art to keeping him off the streets, and soon his friends followed suit, finding their own talents through various art forms, whether it was drawing or DJ-mixing.

Because art provided a creative outlet, he wants to provide Hopkins students the same opportunity.

Similarly to that blank canvas in Mr. Smalls’ classroom, Dominique was introduced to a blank canvas in the hall of The Commons, through a conversation he had with the owner, Peg Stefan.

He shared his vision of bringing back those students, most of whom are now in high school, and hosting a drawing class at The Commons, so they could also experience working within a business setting.

Stefan asked Dominique where he would display the completed artwork and suggested he utilize the walls in that public space.

“We want to do anything that we can do to support the community, especially kids,” Stefan said.

Referring back to that blank canvas in his childhood daycare center, “She’s kind of my Mr. Smalls, but she’s my Ms. Stefan,” Dominique said.

While a drawing class is still in the works, Dominique decided to kick off this new endeavor with a gallery of mixed mediums, featuring past artwork from the previous art club and new artwork such as an ink drawing he made of his mother.

Similar to the goal of Dominique’s position with Hopkins Community Engagement, his hope is to also help bridge the generational gap by displaying art created by both youth and seniors in the community. He is also hoping to provide multi-generational art experiences, such as collaborating with Open Circle, an adult day center in Hopkins. Residents of the center contributed to a piece of art, a collage titled “Belonging,” for the gallery.

The gallery officially opened April 27, with a private showing that included special guests like the founder of First Avenue, Danny Stevens and his entertainment attorney, Lee A. Hutton.

The board will provide leadership for the program and an opportunity to curate the rotating gallery.

As part of Blank Canvas Arts, members will also have the chance to explore a variety of art-focused careers.

For example, four of the board members recently toured Pixelwerx, a large-format printing and graphics design company in Plymouth.

If anyone, particularly youth in grades 6-12, is interested in learning more about Blank Canvas Arts, they can contact Dominique at 952-988-5188 or Dominique.Pierre-Toussaint@hopkinsschools.org.