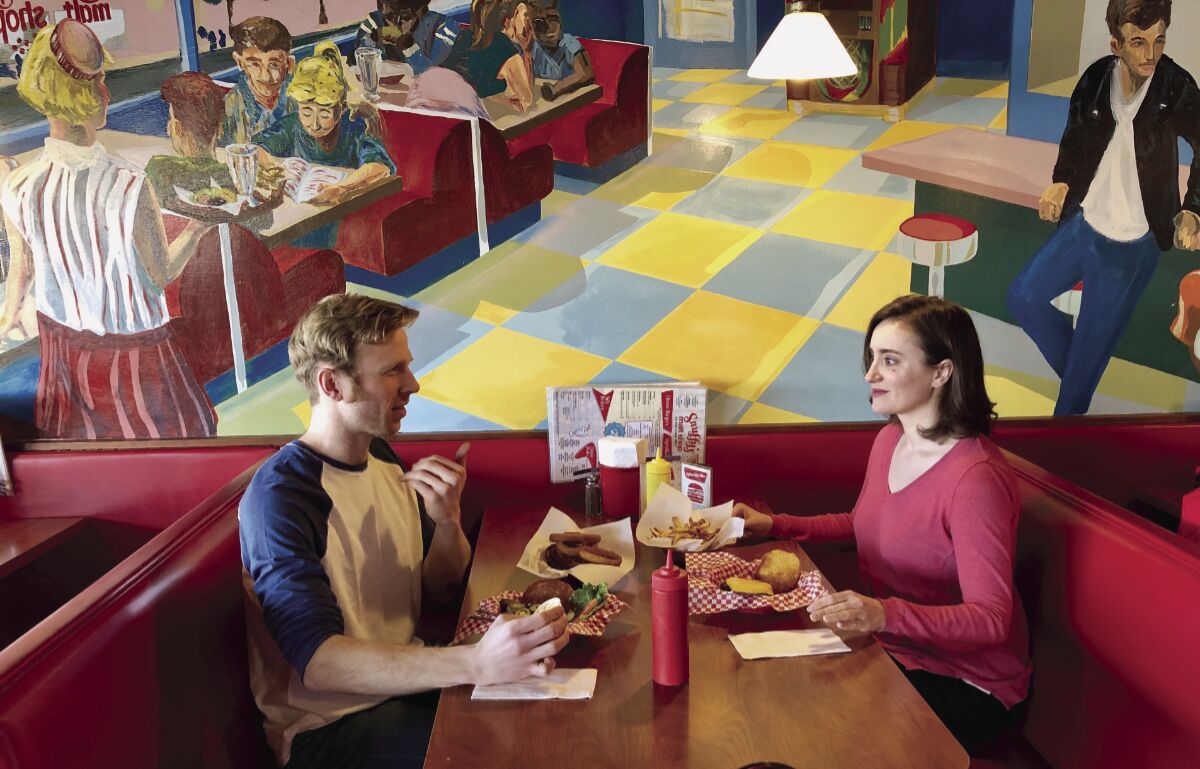 Actors Sam Bardwell and Christine Weber shoot a scene from “Sold Out” inside Snuffy’s Malt Shop in Minnetonka. 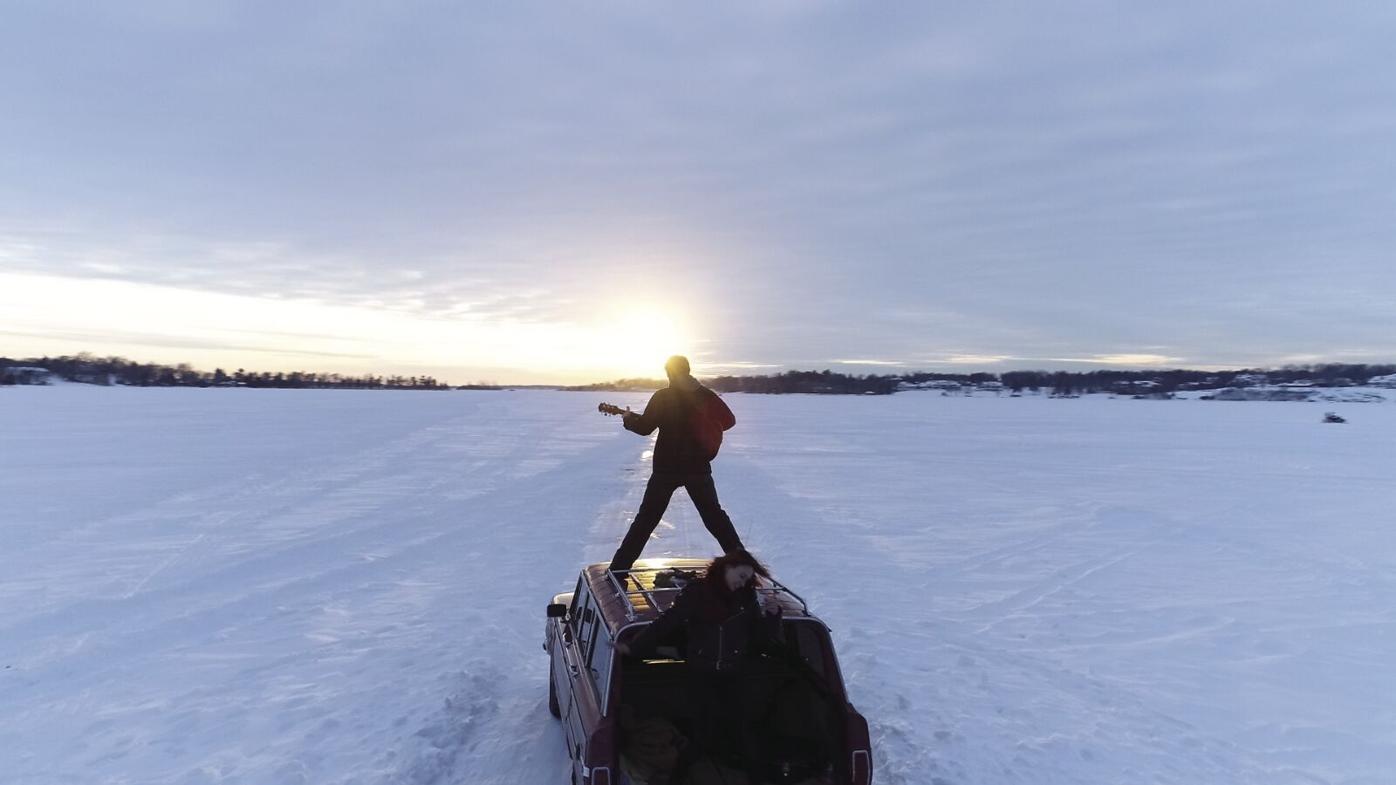 Drone footage used during the film “Sold Out” shows lead actors Sam Bardwell and Kelsey McMahon jamming out on top of a frozen Lake Minnetonka during the Polar Vortex of 2019. 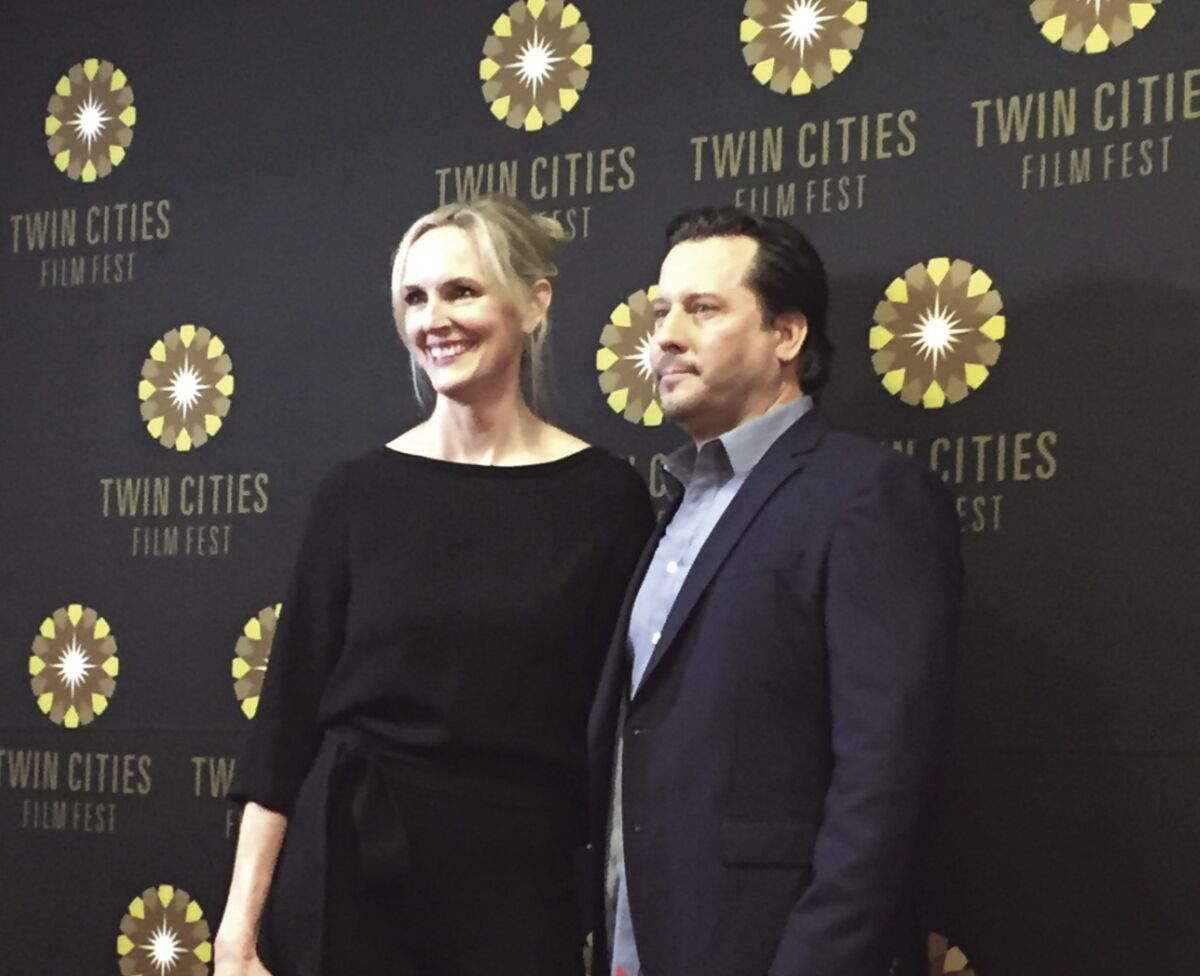 “Sold Out” producers Susan Brightbill and Tim Dahlseid during the Twin Cities Film Festival where the film was recently premiered. 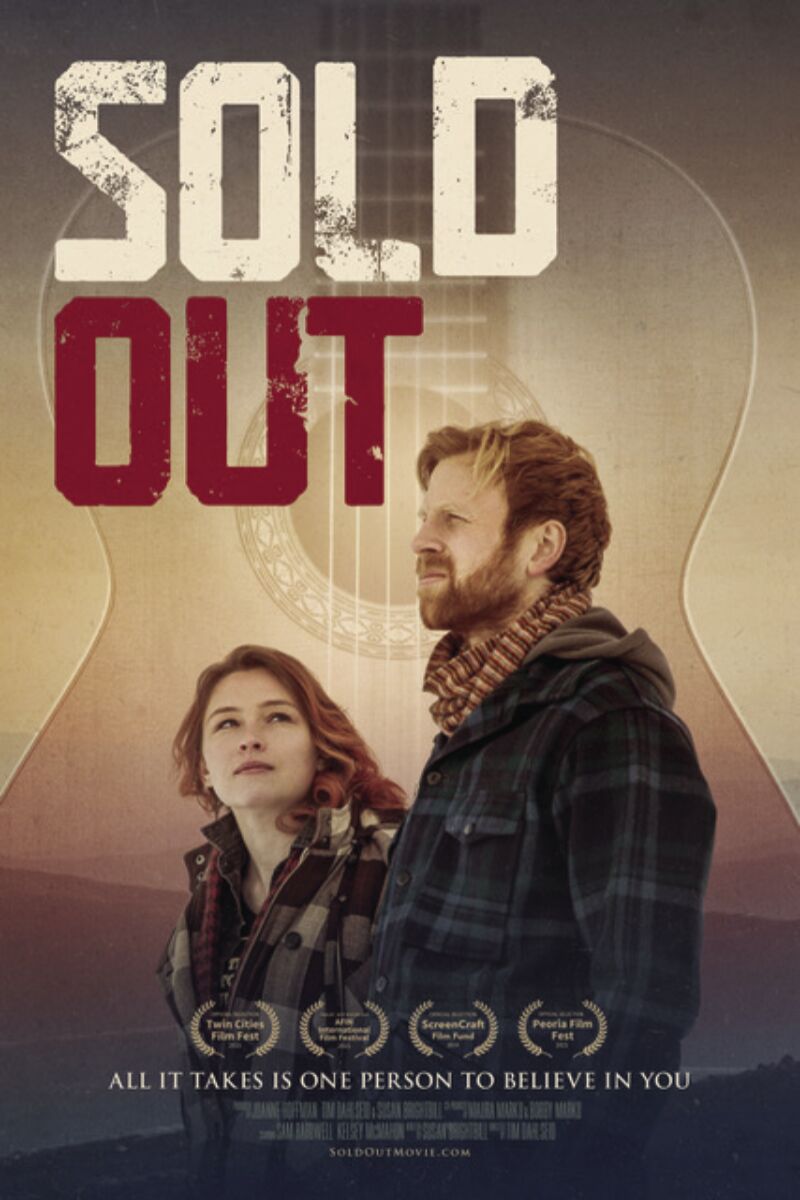 “Sold Out” is a music-based drama about a female talent scout who takes a down-on-his-luck construction worker under her wing and helps him rise to his potential as a singer/songwriter. It is now available Amazon Prime.

Actors Sam Bardwell and Christine Weber shoot a scene from “Sold Out” inside Snuffy’s Malt Shop in Minnetonka.

Drone footage used during the film “Sold Out” shows lead actors Sam Bardwell and Kelsey McMahon jamming out on top of a frozen Lake Minnetonka during the Polar Vortex of 2019.

“Sold Out” producers Susan Brightbill and Tim Dahlseid during the Twin Cities Film Festival where the film was recently premiered.

“Sold Out” is a music-based drama about a female talent scout who takes a down-on-his-luck construction worker under her wing and helps him rise to his potential as a singer/songwriter. It is now available Amazon Prime.

Once aspiring actors, a Minnetonka couple have directed their talents to writing and producing, recently premiering their first feature film, “Sold Out” on the big screen at the Twin Cities Film Festival.

Five years ago, Susan Brightbill and her husband Tim Dahlseid moved from Los Angeles, back to Minnesota closer to where they both grew up.

With the Hollywood sign in their rear view, the dream of making it to the big screen hadn’t faded away. In 2019 the couple produced their first film using local venues and streetscapes, all while in the middle of a Polar Vortex.

“Sold Out” is a music-based drama about a female talent scout who takes a down-on-his-luck construction worker under her wing and helps him rise to his potential as a singer/songwriter.

It’s a story about realizing one’s talents and making their dreams come true.

“On a deeper level, it’s really about how if you’re not living a true life, you’re selling out in some way,” Brightbill said. “There usually comes a point in your life where there’s a reckoning, and you have a choice to either continue to sell out or to live a truer life ... I think John has sold out a little bit,” she said, of the main character’s unhappy situation.

“He’s at a place in his life where he’s just stuck and he’s accepted that. It takes someone to come along and poke at him and show him that he has talents and that he can be living a better life,” she said.

The script is one that Brightbill wrote 15 years ago, in hopes of starring in herself.

“For me was it was character-driven,” she said. “But what’s so great about it for me was that I learned that I didn’t need to play that role and that I enjoy writing way more than acting.”

From there, she began writing scripts making a “nice career in Hollywood as a screenwriter,” she said, having sold scripts to Warner Brothers, Fox, Disney and others.

“In Hollywood, scripts die in development,” Brightbill said, explaining how projects “fizzle away” if they don’t come together, whether it’s due to lack of funding or not finding the right cast and crew. “And that had happened to me for almost a decade. And it got really frustrating.”

After starting out as an actor, Dahlseid also discovered he liked being behind the camera.

He began working as a photographer to get to know the camera and different lenses realizing then “really wanted to shoot a film.”

Dahlseid decided it was time to stop waiting “for someone else to put these scripts together,” and instead start shooting something, Brightbill said.

“It’s pretty exciting to be here after all these years,” she said, of the full-length feature now available on Amazon Prime.

Helping them as co-producers were friends and local filmmakers Bobby and Maura Marco of Excelsior.

“Their support was invaluable,” Brightbill said.

The couple was “very grateful” to have the opportunity to shoot local and to get support from small businesses throughout the production, a stark contrast to shooting films in LA, Brightbill noted.

“We got a lot of help from the local community, which is really exciting,” Dahlseid said.

For example, they worked with a classic car dealership in Excelsior, Gary’s First Class Car Care, where they filmed. They also were put in touch with Cory and Abby Ludens of Excelsior who loaned them the Jeep Wagoneer, which becomes almost a character in the film.

The former Jake O’Connor’s Public House, an Irish pub in Excelsior that closed in 2019, also appears in the film as the exterior of the movies’ local pub Duggin’s. The interior was filmed at Mortimer’s in downtown Minneapolis.

Viewers will find other recognizable shots on Excelsior’s Water Street, along with a scene from inside The Rebel Room, located in the basement of Red Sauce Rebellion.

Snuffy’s Malt Shop also makes an appearance along with the Stone Arch Bridge and the downtown Minneapolis skyline.

Excelsior Brewing was also “extremely generous” by letting them use product placement so they didn’t have to hide the beer labels, which can be seen throughout the film.

They shot the film over 22 days in the middle of the Polar Vortex with lows reaching 40 below.

“We were ready to call it off,” she said.

Instead, the cast and crew were ready and willing to keep going, including the scene shot on Lake Minnetonka where lead actors Sam Bardwell as John, and Kelsey McMahon as Kat are jamming out on top of the Jeep on the frozen lake.

The couple “had the pure joy of premiering” their first movie at the Twin Cities Film Festival in October to a sold-out theatre in St. Louis Park.

“It’s really been a lifelong dream to see a movie I wrote on the big screen,” and seeing and hearing the audience’s reactions to the different scenes, she said.

During the festival, the movie won runner-up for the Audience Award behind the Hollywood film “Belfast,” directed by Kenneth Branagh and starring Judy Dench.

“We were completely honored to be runner-up to ‘Belfast,’ which will probably be an Oscar-nominated film,” she said.

The couple is also excited to get started on their next film “Wrecking Ball,” a screenplay Brightbill also wrote which is about how a family can tear themselves apart and put themselves back together while waiting for medical test results over Christmas.

“I like to write things with a little comedy and a lot of heart,” she said.

They also shared the news that the Minnesota Legislature passed a new tax incentive to help bring film production back to the state.

The new bill, which passed in June offers a $5 million transferable tax credit.

“Back in the 90s, there was a lot of film production here,” Dahlseid said, including “Grumpy Old Men,” “Mighty Ducks,” and “Fargo.”

Filming in Minnesota dwindled as other places made it more favorable through tax incentives for productions, including Canada, Louisiana, New Orleans, Texas and Georgia.

Now Minnesota “is finally getting back in the game,” he said. “So we’re really looking forward to taking advantage of that and excited to see more productions come back to the states and create jobs,” he said.

From dining at a local restaurant to hotel stays for out-of-state cast and crew, “It’s very beneficial to have movie and TV productions in the state,” she said.