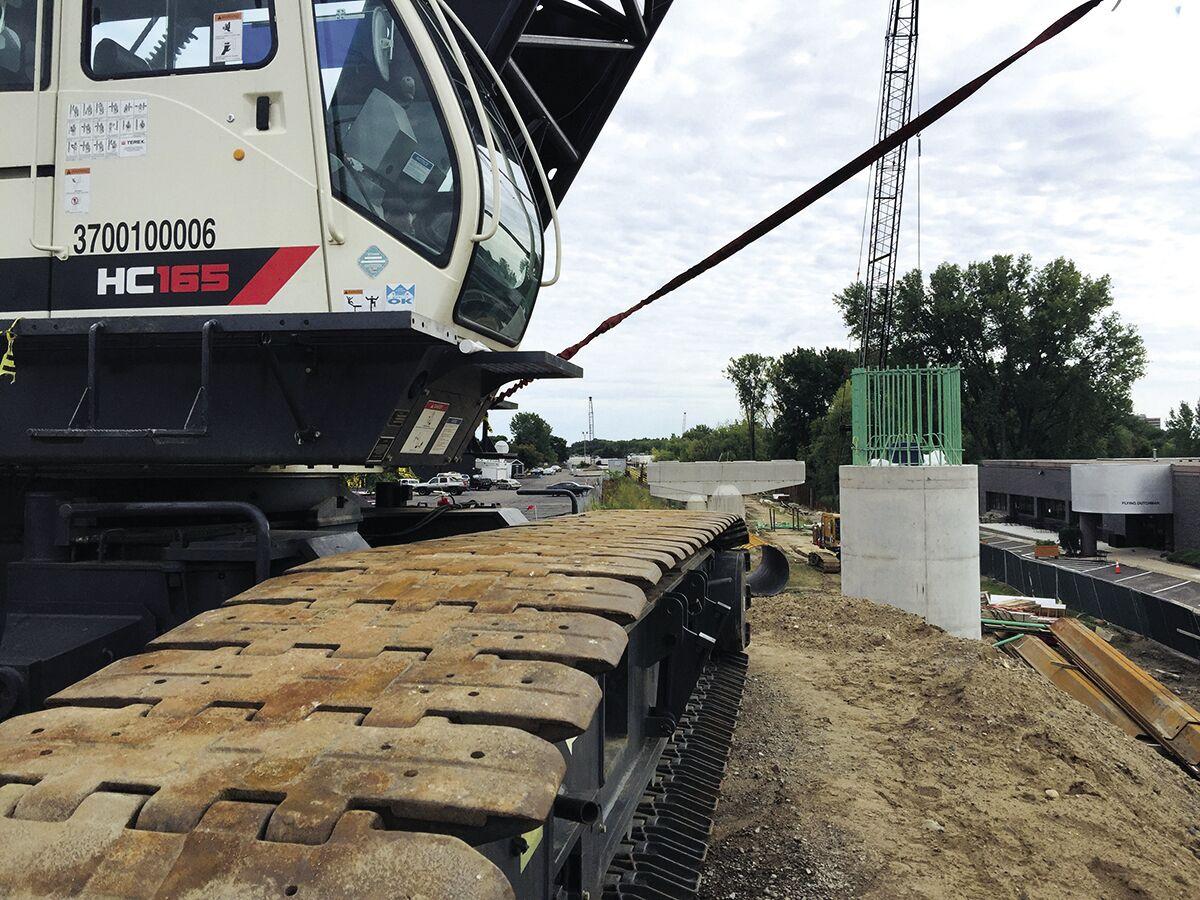 This is one of the several cranes in use by the contractors working on the Southwest Light Rail Transit line. It was poised for work near the intersection of Shady Oak and Highway 212 in Eden Prairie. 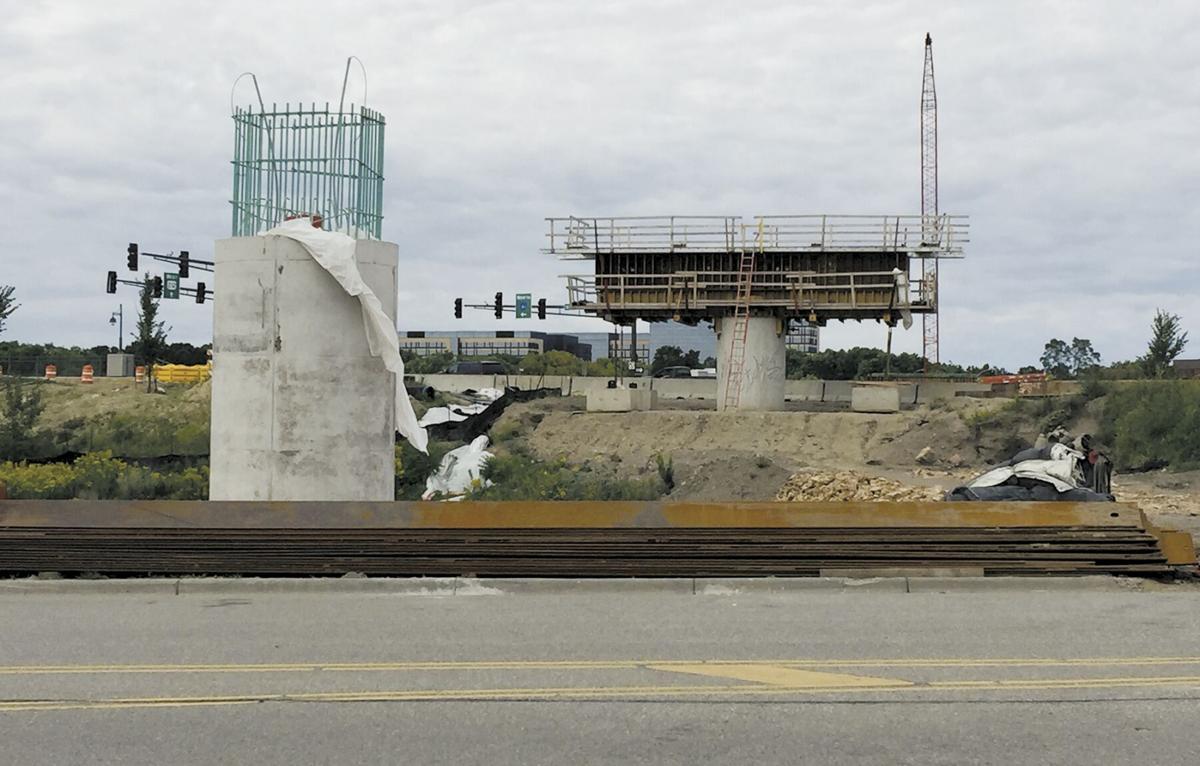 The work on the SWLRT bridge abutments on either side of the highway continues near the intersection of Shady Oak and Highway 212 in Eden Prairie. 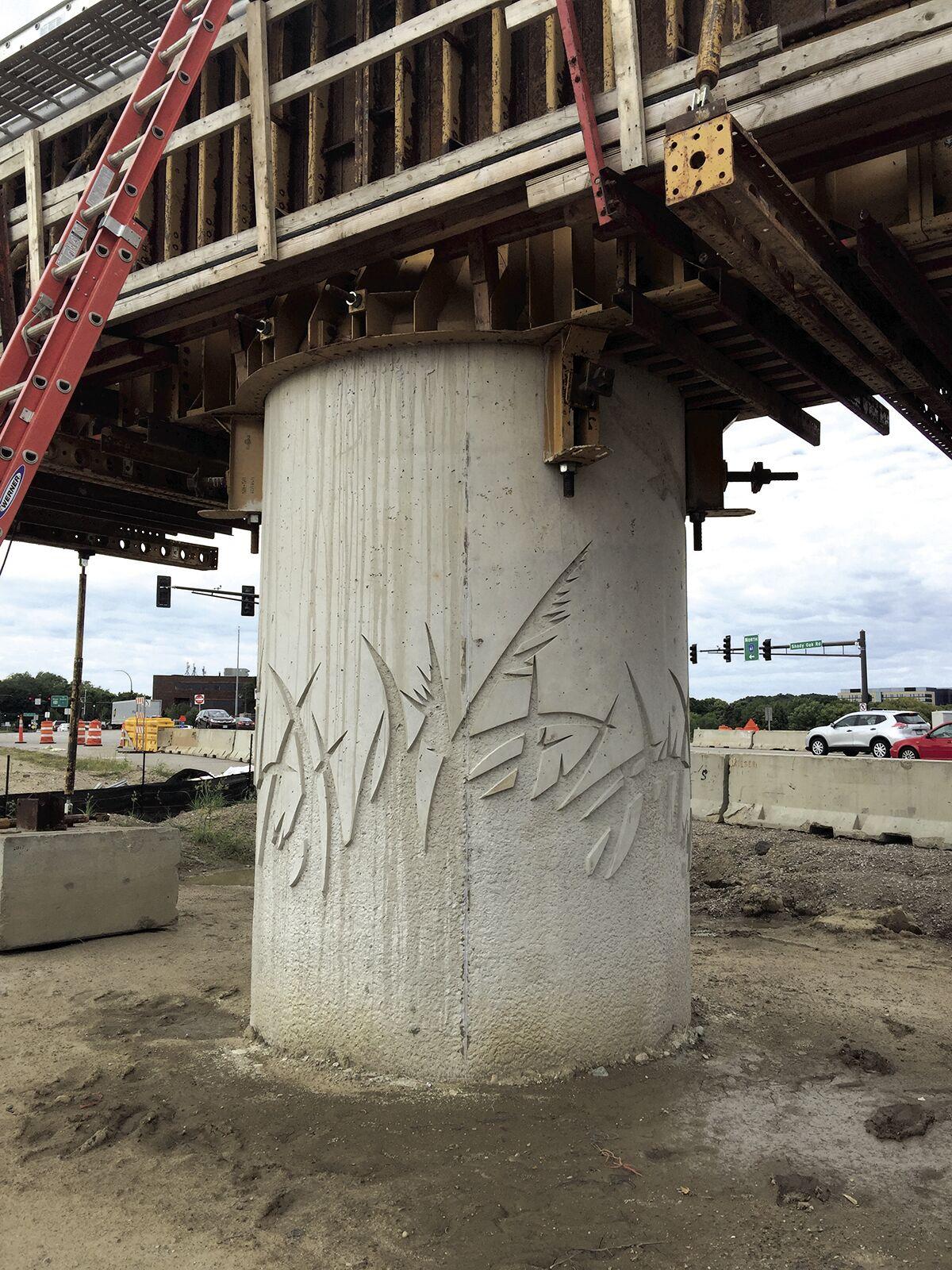 The intricate stenciling on the bridge posts in Eden Prairie is distinct. 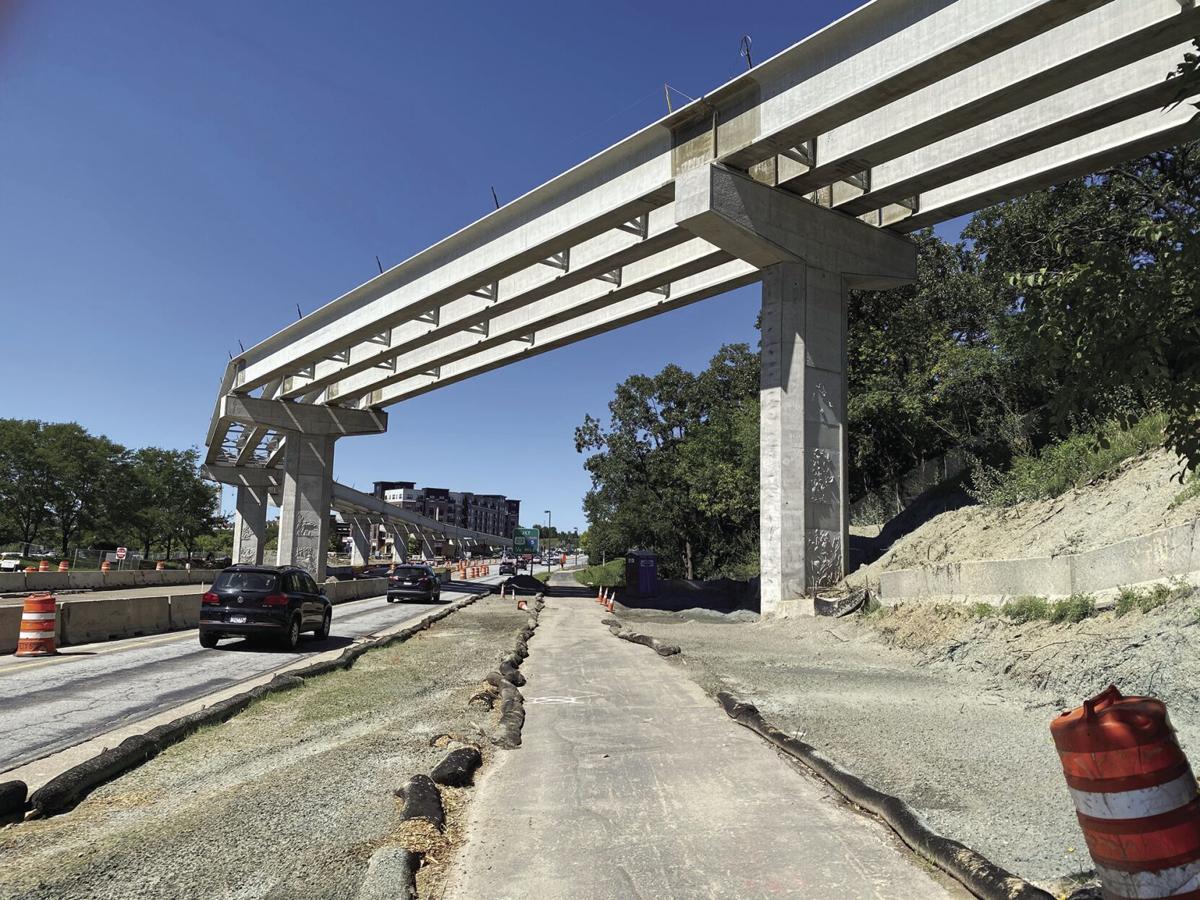 The bridge construction along the Southwest Light Rail Transit’s alignment from Eden Prairie to Minneapolis is taking shape. 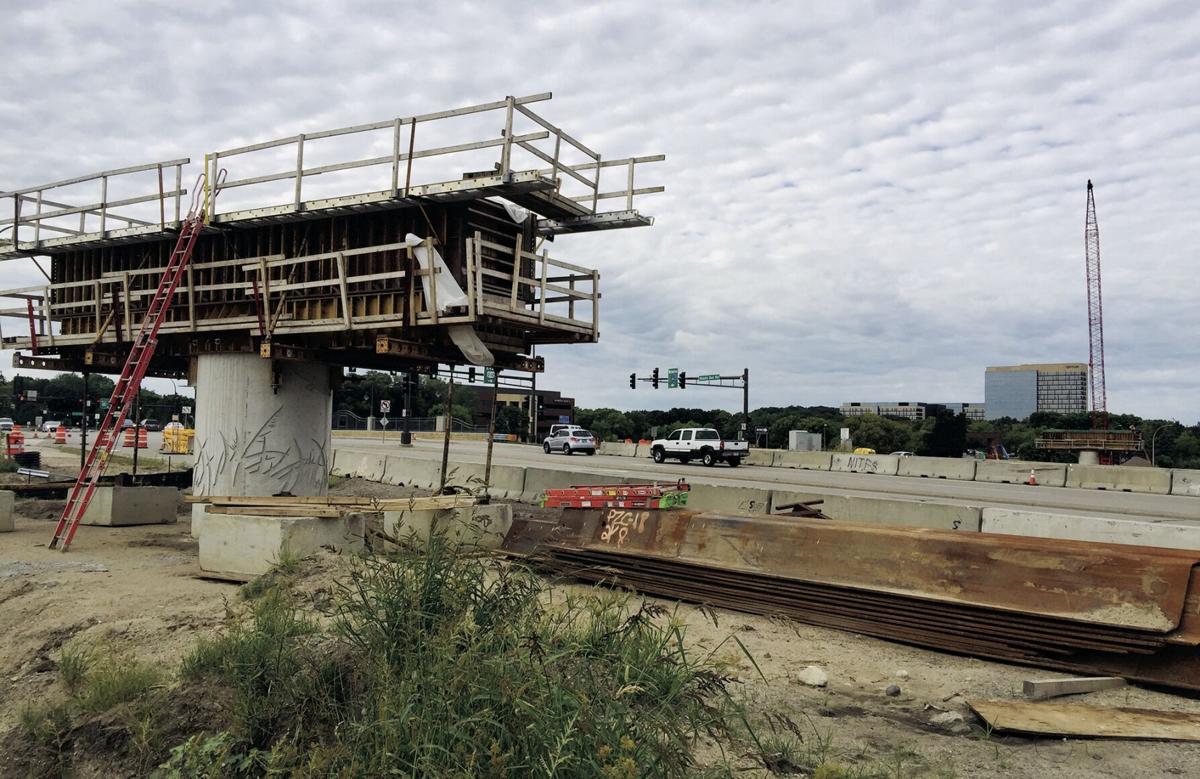 This span of the Southwest Light Rail Transit’s system extends across the highway near the intersection of Shady Oak and Highway 212 in Eden Prairie.

Neither winter nor COVID-19 affects the project’s progress

At a cost of more than $2 billion and a revenue-producing operational date set for 2023, the Southwest Light Rail Transit project is in “full tilt,” said Trevor Roy, the senior communication specialist for the project.

The 14.5-mile light rail transit system is under construction between Eden Prairie and Minneapolis, with its train cars also scheduled to travel through St. Louis Park, Hopkins, and Minnetonka. Between 20% to 25% of the project has been completed.

The task of transporting people across the south metro to Minneapolis will be significant.

Here’s what the SWLRT website says: “The line will include 16 new stations and will be part of an integrated system of transitways, including connections to the METRO Blue Line, the Northstar Commuter Rail line, and many bus routes. At Target Field Station in Minneapolis, Green Line Extension trains will continue along the METRO Green Line, providing one-seat rides to the University of Minnesota, State Capitol area, and downtown St. Paul.

Arriving at the final destination has many excited and looking to a modern, clean answer to transportation in the Twin Cities.

While much of the working world was shut down because of the COVID-19 pandemic, the work on the light rail system has chugged along seamlessly.

Roy said when the pandemic hit, the contractor instituted protocols for employees, but work didn’t slow.

“Thankfully, we work outdoors and we directed the contractor to take precautions with social distancing and mask use when social distancing is not working. But COVID has not really been a huge factor in this. For the office staff, we’re all working from home and have been since March and we’re probably not going back for a while. It’s not like what we’ve seen in restaurants, bars or other industries,” he said.

Also important to the continued construction was the availability of supply.

There were no delays because of manufacturing slowdowns, Roy said.

He pointed to a recent delivery to bolster that fact.

Five of the trains for the SWLRT have already been delivered to Eden Prairie and will be tested during the next 18 months.

The construction progress remains on schedule and robust.

“It’s going gangbusters in Eden Prairie and that’s pretty indicative of the rest of the alignment,” Roy said. “There isn’t a single mile of the alignment where some sort of work isn’t being done.”

The focus of the construction in 2020 has been the building of stations, bridges and the burrowing for tunnels.

Describing the project, Roy said the entire effort has been and will continue to be “unique.”

“There will probably never, ever be a project like this in the state of Minnesota again. The number of bridges, the number of tunnels - everything is unique to it.”

He describes everyday challenges for the construction crews, noting that those issues have not slowed progress.

“Either it’s dealing with wetlands, or confined construction limits, it’s the biggest civil project in the state’s history by a lot. It’s even bigger than U.S. Bank stadium. This is THE project of this decade.”

It doesn’t appear any slowdowns are in the future, even with winter on its way.

“When it freezes and they can’t dig, those areas may be shut down for a time and they go work on to other things,” Roy said. “The contractor will work through winter. If we have a mild winter it will be like summer construction. There are no breaks.”

Roy also noted that community support has been appreciated.

“We continue to thank the communities that are impacted by construction. We know it can get a little noisy, a little dusty. Bear with us and if people have any concerns, they should feel free to call the hotline and if they’re looking for updated information, they can always check out the website and the weekly construction update that goes out every Friday,” he said.

Info: Call the construction hotline at 612-373-3933; visit the SWLRT at metrocouncil.org/transportation/projects/Light-Rail-Projects/Southwest-LRT.aspx