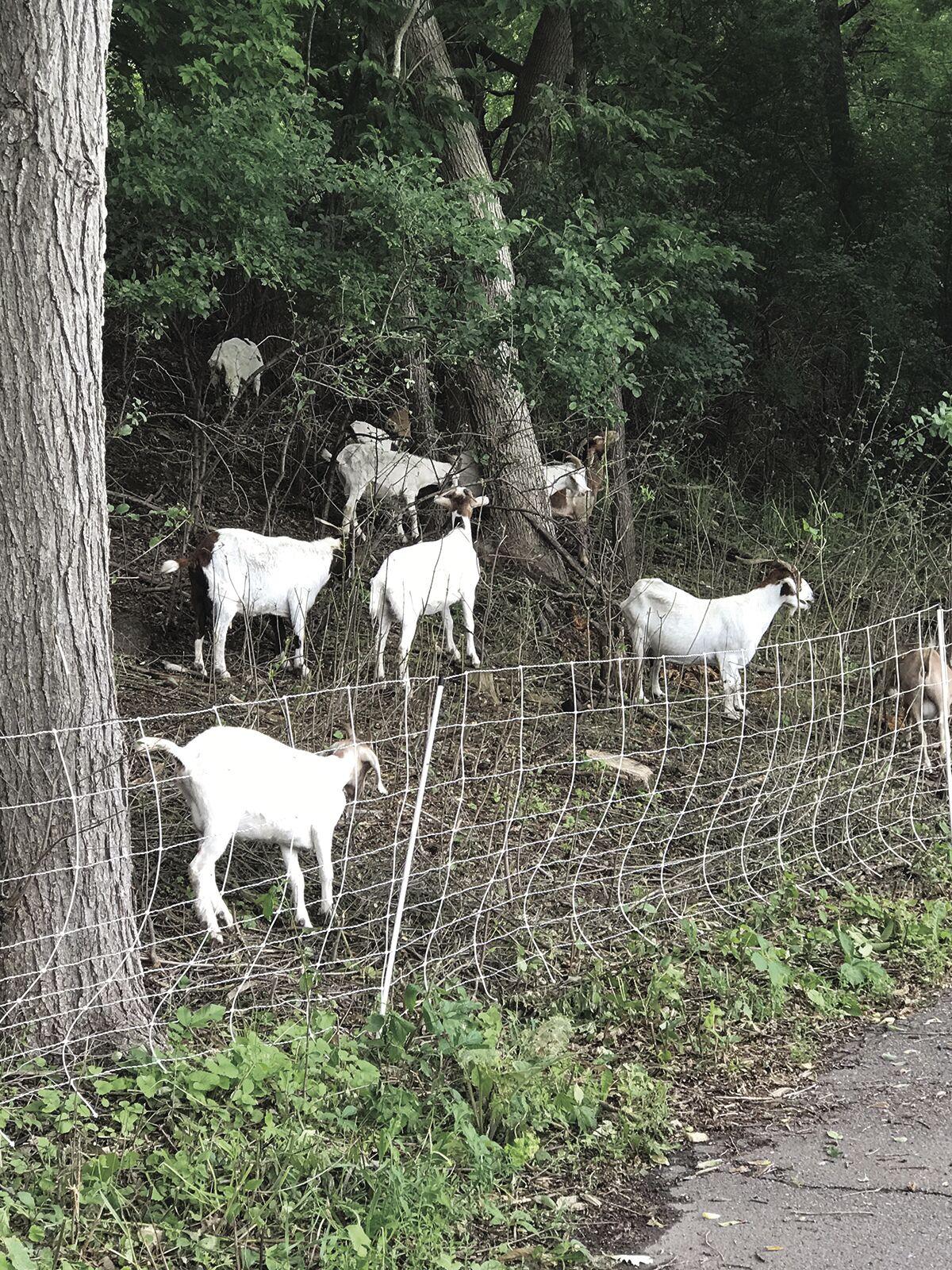 Goats provided by Senjem Goat Pros of Hayfield do their work at The Preserve Association in Eden Prairie. 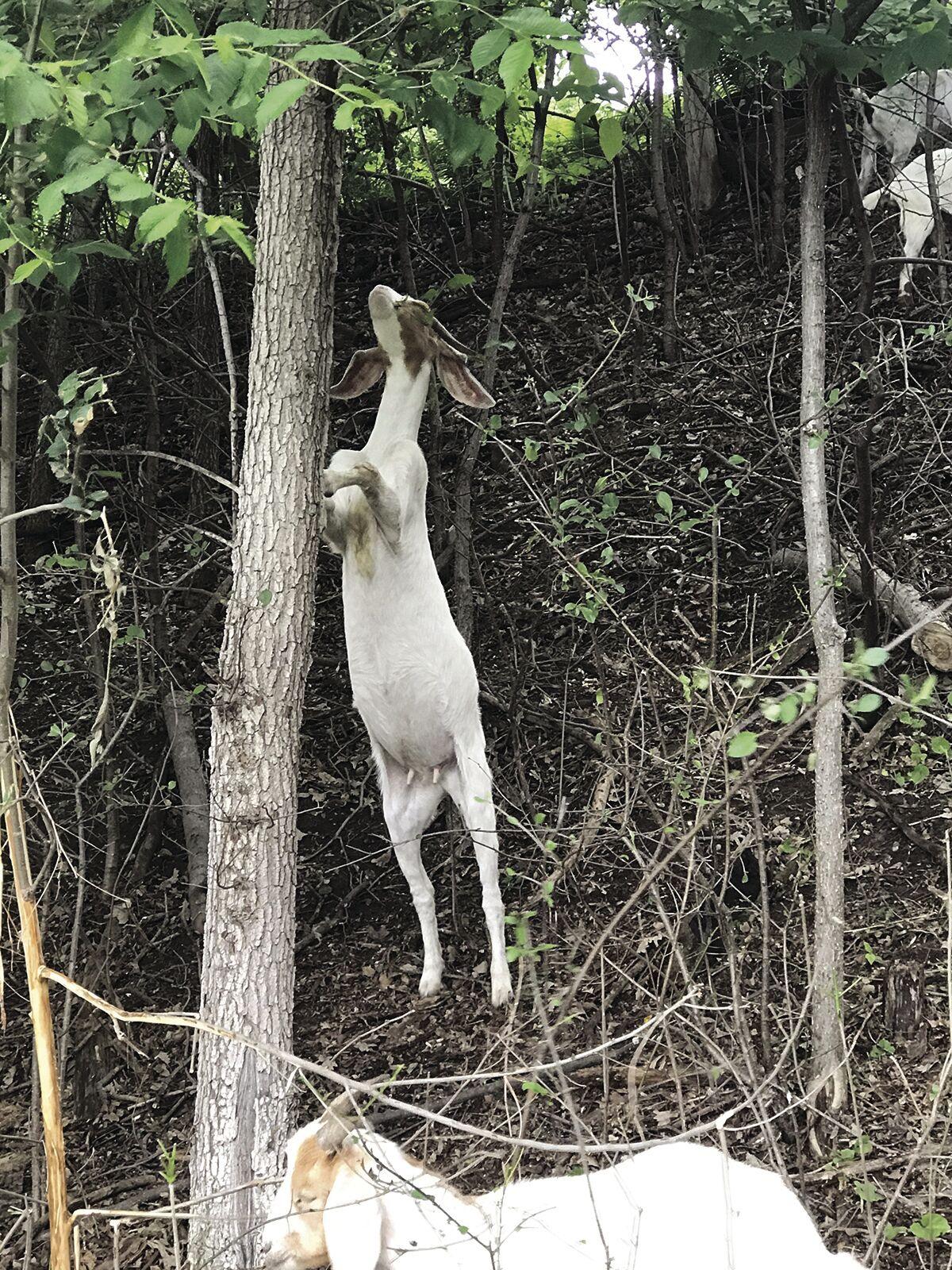 A goat reaches high for the leaves of a buckthorn plant at The Preserve Association in Eden Prairie.

The hungry animals are helping clear the property of buckthorn

The invasive weed is a thorn in the side for many.

Buckthorn is an invasive plant that simply takes over, a fact that the movers and shakers at The Preserve Association in Eden Prairie are working to change with goats.

After 32 goats were set loose on acres of property at The Preserve, General Manager Scott Anderson is a believer.

Recently faced with the issue of the spread of buckthorn, it was time to take action.

Anderson said he could have set the homeowner association’s staff loose cutting and removing the invasive plant, but the cost seemed prohibitive.

After he had a conversation about a business that uses goats to remove buckthorn, he looked into it.

What he found was Senjem Goat Pros, LLC, from Hayfield.

“I reached out last fall and communicated through the winter and once the snow was gone [Tim Senjem, the owner] came up and surveyed the area we were thinking about, which is about 8 acres of land,” Anderson said.

With a deal to bring the goats in close at hand there was one more hurdle to clear: city regulations.

“At that point, I reached out to the city of Eden Prairie and talked to them about the idea and process,” he said.

Because Eden Prairie has an animal grazing ordinance, he worked with the city at getting a temporary permit on a trial basis.

With the permit approved, the goats were brought in to begin their work in destroying the buckthorn on four tracts of property. A 4-to-5-acre tract was first and took the first three weeks. A parcel of 1.5 acres took about a week’s worth of work by the goats; and the final two smallest parcels that were just recently completed.

The goats attack the buckthorn by eating the leaves of the plant. But their efforts don’t kill the plant immediately.

The process, which takes up to three years, requires that the goats be brought back for at least the second year to once again eat the plant’s leaves.

The only other means for ridding the property of buckthorn is cutting the plant, a lot of human effort.

When Anderson first made his presentation to the board that oversees The Preserve, he said he provided conservative numbers.

“The thought was that it would save us money,” Anderson said.

However, he wasn’t sure what to expect, so he told the board members that he wouldn’t know for sure until the goats did their work.

The board approved the measure and the goats were brought in.

“Some of our buckthorn is up to 6 to 8 inches in diameter,” Anderson said. “Digging those roots out would have been a real chore. The ones that are under an inch or half-inch are fairly easy to pull and in the past, we would have cut and treated the remaining stump and will continue to do that in other areas that aren’t big enough for goats.”

The biggest benefit for Anderson wasn’t the goat’s work.

“One of the biggest benefits was the opportunity not to use chemicals. We’re still very hopeful that will be the case,” he said.

Another benefit was the public relations aspect.

“We have had crowds of people every day of every age you can imagine crowding around [socially distanced] and watching the goats. We had a board meeting and one of the comments was they felt that as valuable as it is getting rid of the buckthorn, the value is tremendously higher for the way it’s affected the community,” he said.

One of the lighter moments of the summer occurred when it became necessary for the goats to be moved to another location at the site.

“When we moved from one area to the other, we had to go a couple of city blocks with them. They were going to load them in a trailer, but it was just across the field, so I told the farmer that we were hoping for a goat parade.

So, with a bucket of corn and a calling of the goats, they followed, much to the delight of residents.

“It was quite the event,” Anderson said. “We even posted videos on our Facebook page.”

But reclaiming the land from the invasive was the ultimate goal.

“Most of the areas where we’re working are wooded, and it’s one of those things where you really didn’t notice that there was a forest floor there. Now that [the buckthorn] gone, or once it’s all gone in two to three years, we’ll be able to plant or encourage some native natural forest floor growth that will thrive in the shade and under the canopy. It will be more of what the woods used to be like in these parts.”

The Preserve, located just minutes from the major highways and the Eden Prairie Retail District, was established in the 1970s.

“The idea was you could have schools, churches and shops, like a town. We’ve got two pools, tennis, walking paths, 15 gardens, and five playgrounds. One of the old barns and stables has been converted into the community center and offices,” Anderson said.

With the hiring of a company that uses goats for some of the hard work, The Preserve is also now on the cutting edge of removing a fast-growing invasive.