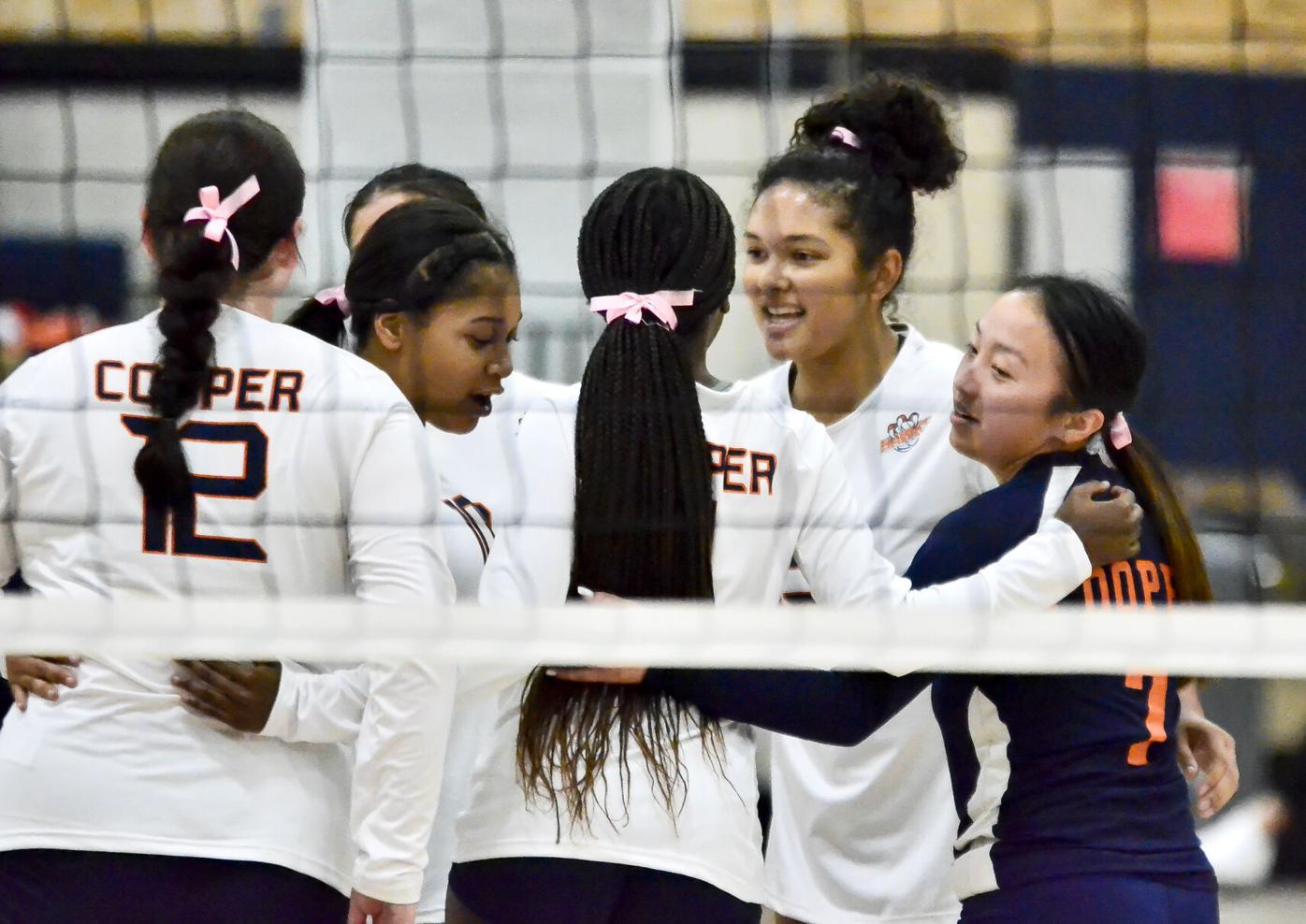 Cooper senior LaMya Holmes (second from right) celebrates with teammates after a kill in the third set Oct. 5 against Waconia. The Hawks fell 3-0 (25-17, 25-12, 25-18), but Holmes finished with seven digs, four kills and three aces. 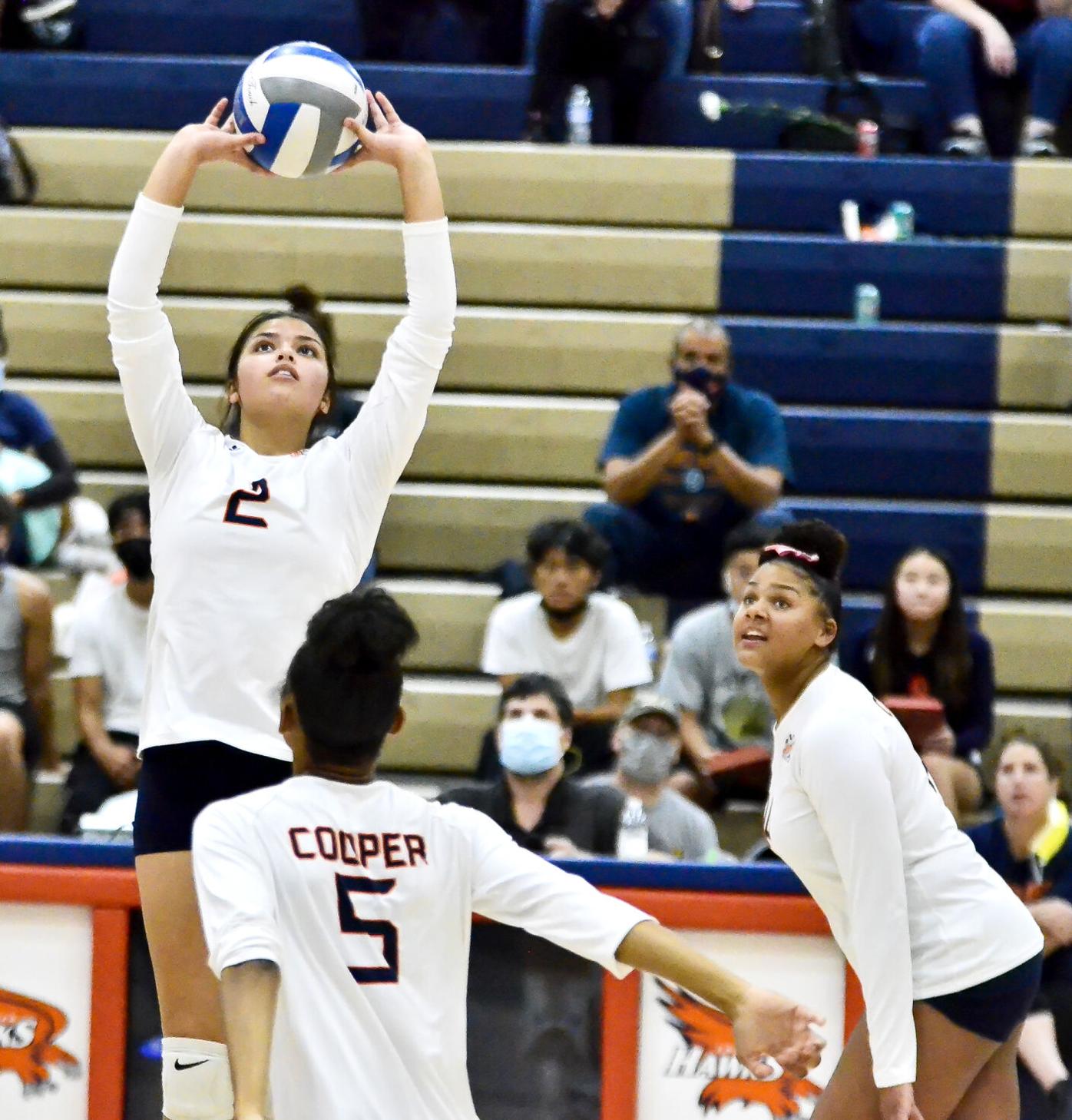 Cooper junior Savannah Ballard sets up the attack on an assist to senior Timiya Reese in the second set Oct. 5 against Waconia. Ballard finished with seven assists. 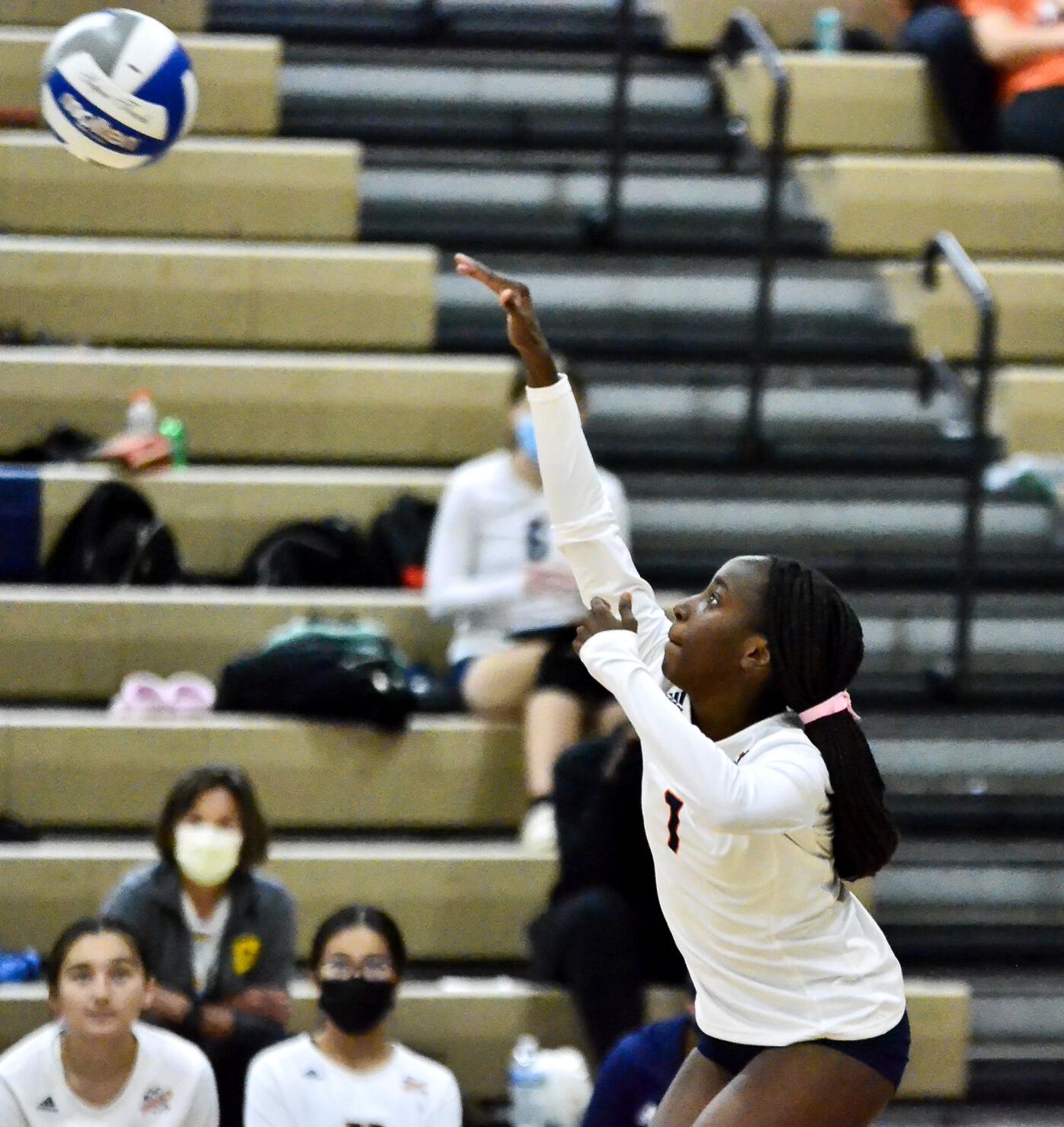 Cooper senior Rachael Omoke knocks the ball over the net in the second set Oct. 5 against Waconia. Omoke had a couple of kills and an ace. 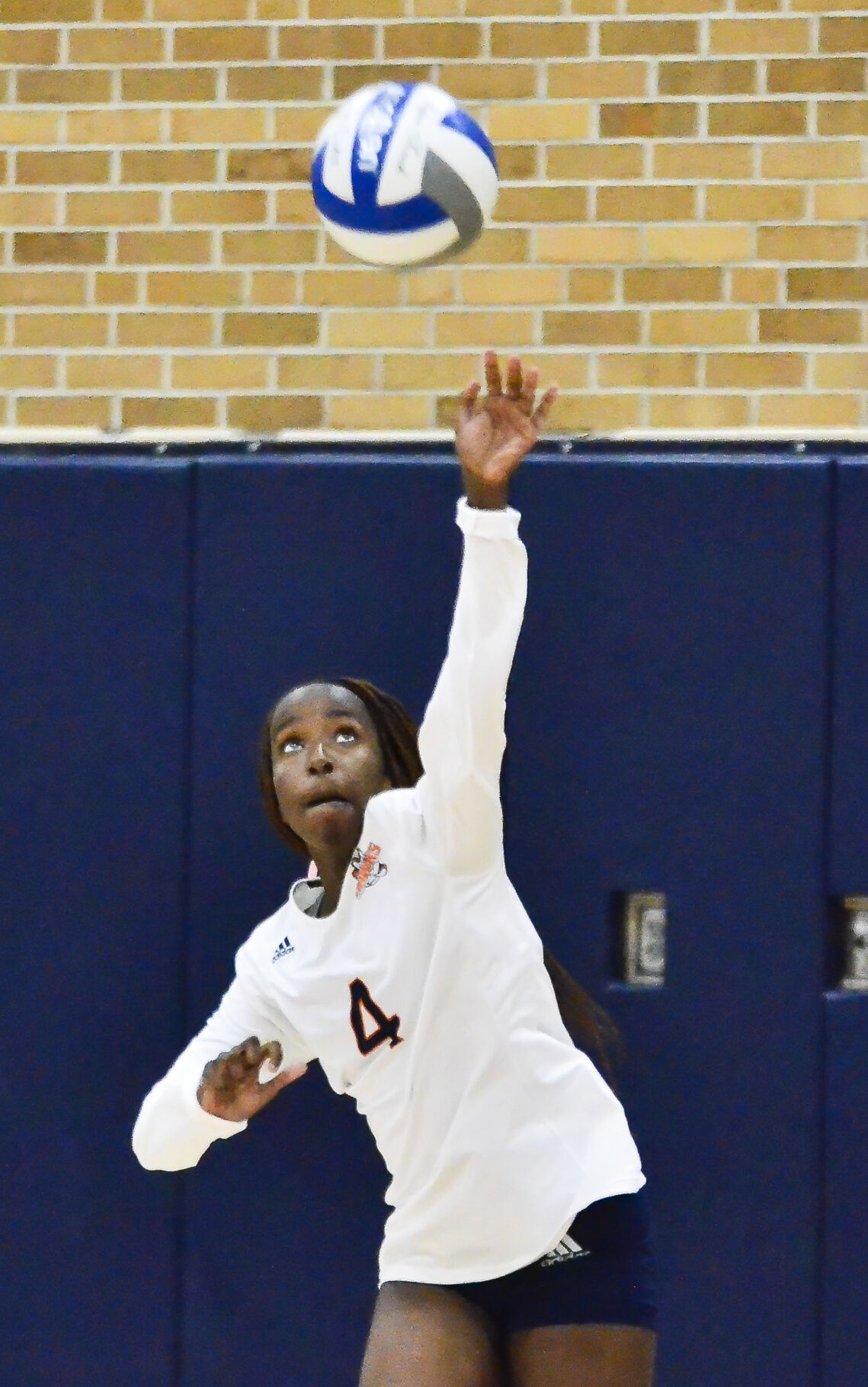 Cooper senior LaMya Holmes (second from right) celebrates with teammates after a kill in the third set Oct. 5 against Waconia. The Hawks fell 3-0 (25-17, 25-12, 25-18), but Holmes finished with seven digs, four kills and three aces.

Cooper junior Savannah Ballard sets up the attack on an assist to senior Timiya Reese in the second set Oct. 5 against Waconia. Ballard finished with seven assists.

Cooper senior Rachael Omoke knocks the ball over the net in the second set Oct. 5 against Waconia. Omoke had a couple of kills and an ace.

Cooper volleyball is having a different experience in 2021 than the shortened 2020 season.

In the last few weeks, the Hawks have improved their serves-received percentage by 2.3 points, and that, along with reducing serving errors, are two of three main goals for the rest of the year. Against Waconia, Cooper was able to go on some point runs and keep in the first and third sets due to success in both of those categories.

“When we were going and we were serving and getting the ball in, we were able to go on those point runs,” coach Tiara Russell said.

But the other goal is to continue to have fun through the process. Wins haven’t come consistently yet, but Russell said that those results are possible.

“I know sometimes they get a little discouraged, but this school that has all the potential in the world of being great and trying to pull it out of them is one of our biggest goals here,” Russell said.

Senior captain setter Savannah Ballard said she is definitely enjoying 2021 so far. Ballard said that 2020 seemed like a blur with the COVID-19 pandemic forcing the season to be pushed to an October start before the season was shut down in late November before sections.

Now, the team can have outside-of-school bonding and the chance to go to different alumni games.

One of Ballard’s favorite memories so far is when the team went to the University of North Dakota at St. Thomas University match Sept. 30. They were able to travel in the team vans and also get something to eat together.

Ballard was also able to see one of her old rivals in Armstrong graduate Libby Mattila, who plays for St. Thomas.

“It’s really inspiring to go to college matches and just see how good they are, and I think we really do take a lot away from it,” Ballard said. “I know I do, personally.”

Of course, there were some moments of getting used to playing closer to normalcy, as well. Last season, there were very few people in the stands, just a few parents. So it was mostly quiet in the gym.

Now it is much louder, and that meant that the team had to be even more mentally focused during a match.

“Getting used to having people in the stands and having to ignore it and zone it out has been a thing too, but they’ve been more focused on the court these last couple of matches here and it’s helped them,” Russell said.

One of the last matches was the loss to Waconia.

The first and third sets were closer than the final score would indicate.

Senior captain outside hitter LaMya Holmes was one of the reasons. Holmes had a kill, several aces and a few digs in the first set as the Hawks cut the deficit to 19-14. Another dig later led to a point, but Waconia was able to put the game away.

“(Holmes) has really stepped it up as a captain and as a leader on the court,” Russell said.

Junior Sharrisa Ross is another player that Russell said has improved so much in 2021 alone, especially with “her contact with the ball and hitting and her attention to blocking.”

Ballard, who Russell said has also taken charge on the court and stepped up as a leader, had a nice time serving in the first set, helping Cooper go on a four-point run.

Russell said that both Ballard and Holmes have grown into their roles on the court.

“I think they were a little shy at the beginning of the season in filling that role, but once they got into it and got a little bit more comfortable, they were able to take charge on the court,” Russell said. “Take charge in a sense of helping to push their teammates in a positive direction to try to stay in there with their head up high.”

Ballard started the third set with an ace, and senior Rachael Omoke and Holmes added a few kills and another ace. Junior Lily Chang also had an ace, as the Hawks took a 15-14 lead.

Senior Timiya Reese also had a kill later in the set, but Waconia ended on a 6-0 run to take the set and the match.

“The girls came out more focused on their serves received today, which in the past has been one of our highest struggles, and they were able to step on our serves received so that we could capitalize more on offense,” Russell said. “They ended up struggling a little bit with our execution, and that’s something that they also have been working on and they’ve been improving every game.

“It was more so the serves received that did help them stay in that game.”

There have been surprises this season, as well.

“I have been playing here for a really long time and honestly, this group of girls is probably my favorite that I have ever played with,” Ballard said. “I have known them for a really long time. Since I was in sixth grade, I have been playing with (Holmes). It’s just been really fun bonding. Every day, I am actually excited to come in and hang with my friends and I think they all feel like that too.

“So I think throughout the season, I think our bond has grown and we have all just become really good friends, and I really enjoy seeing that.”