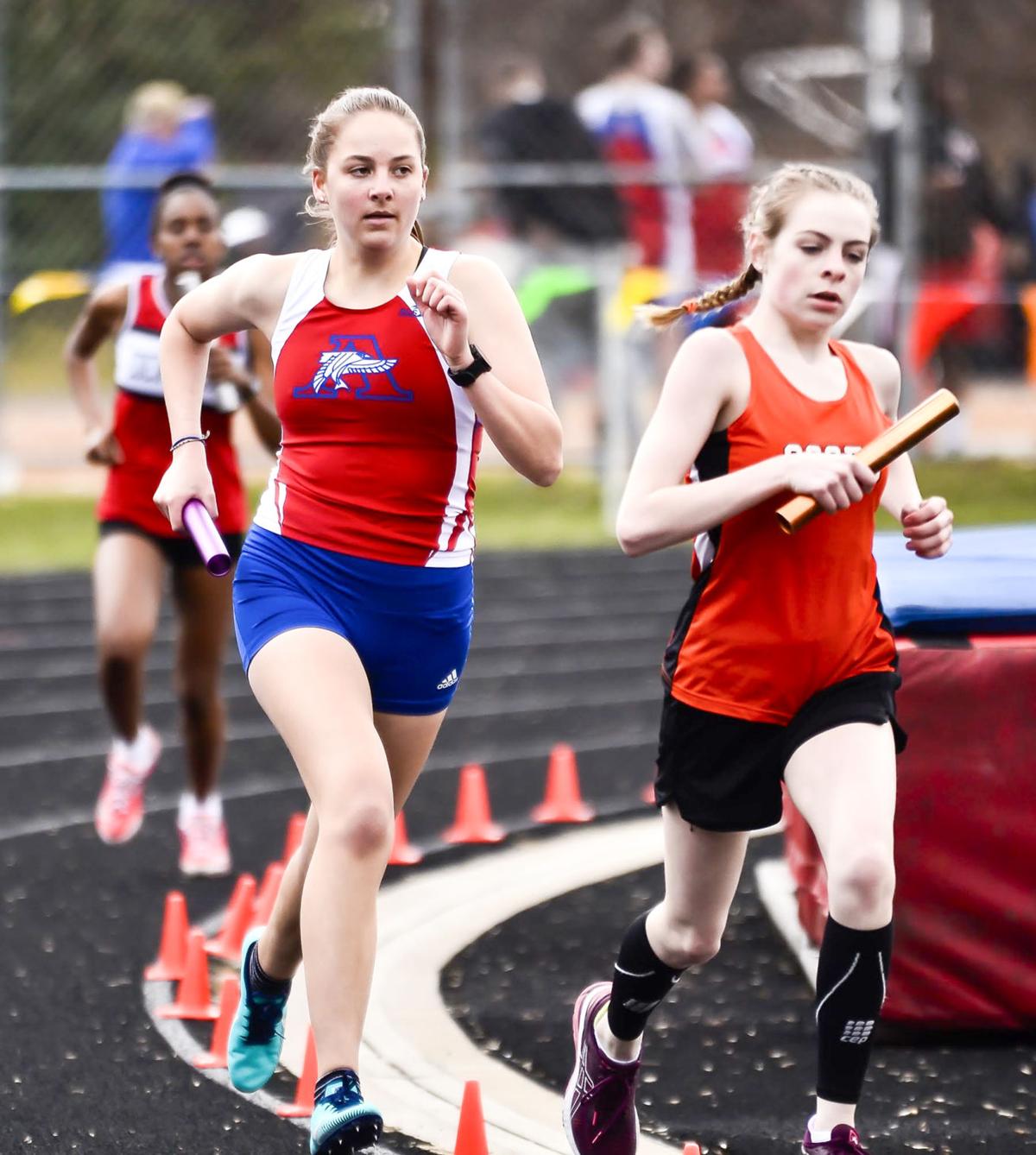 Armstrong senior Carlene Neuville begins the 4x800 relay in the 2019 Armstrong invite. Neuville was one of several seniors back in 2020. 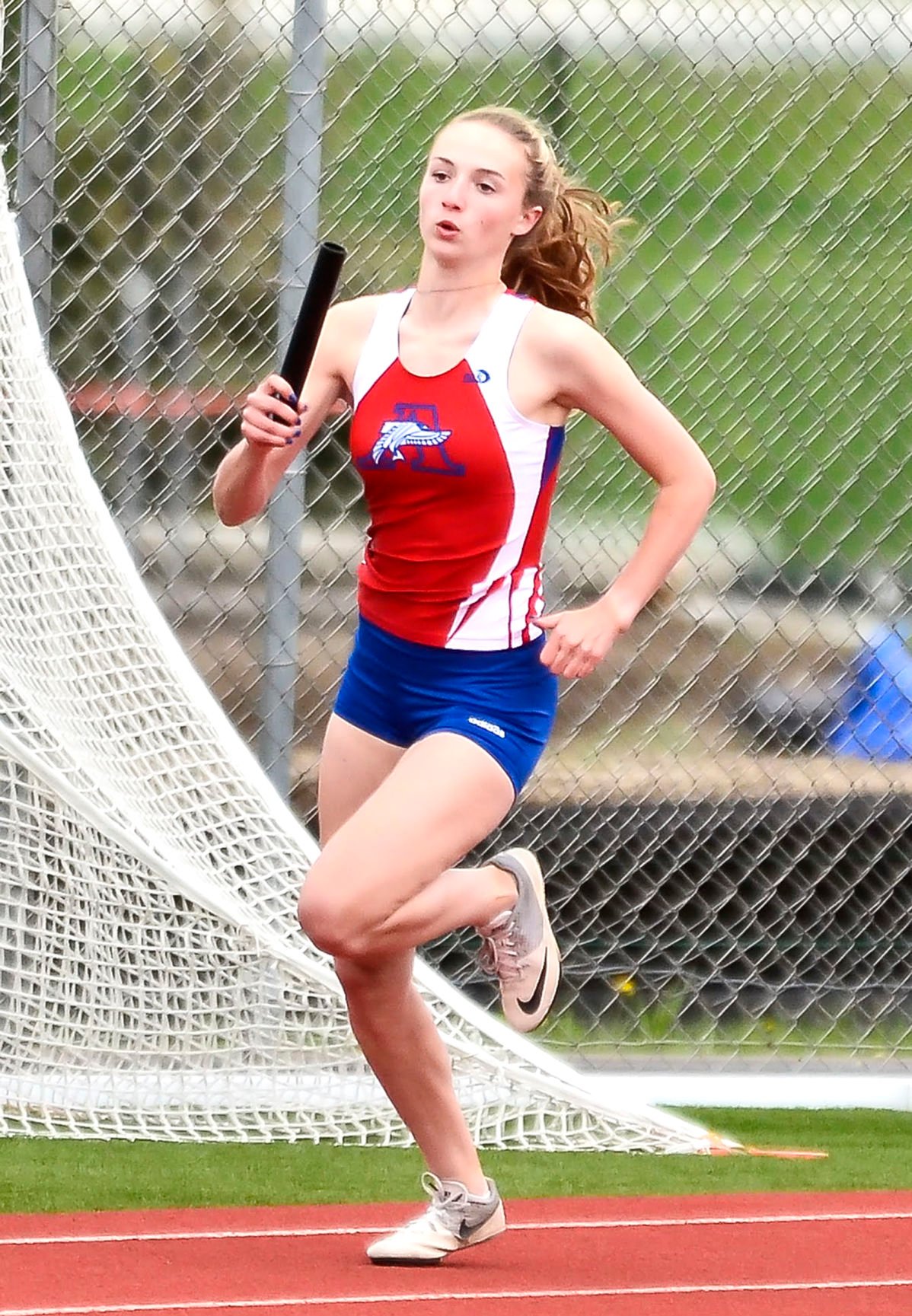 Armstrong senior Rachael Ukestad races in the 4x100 relay at the Northwest Suburban Conference meet in 2019. Ukestad was slated to be a captain in 2020. 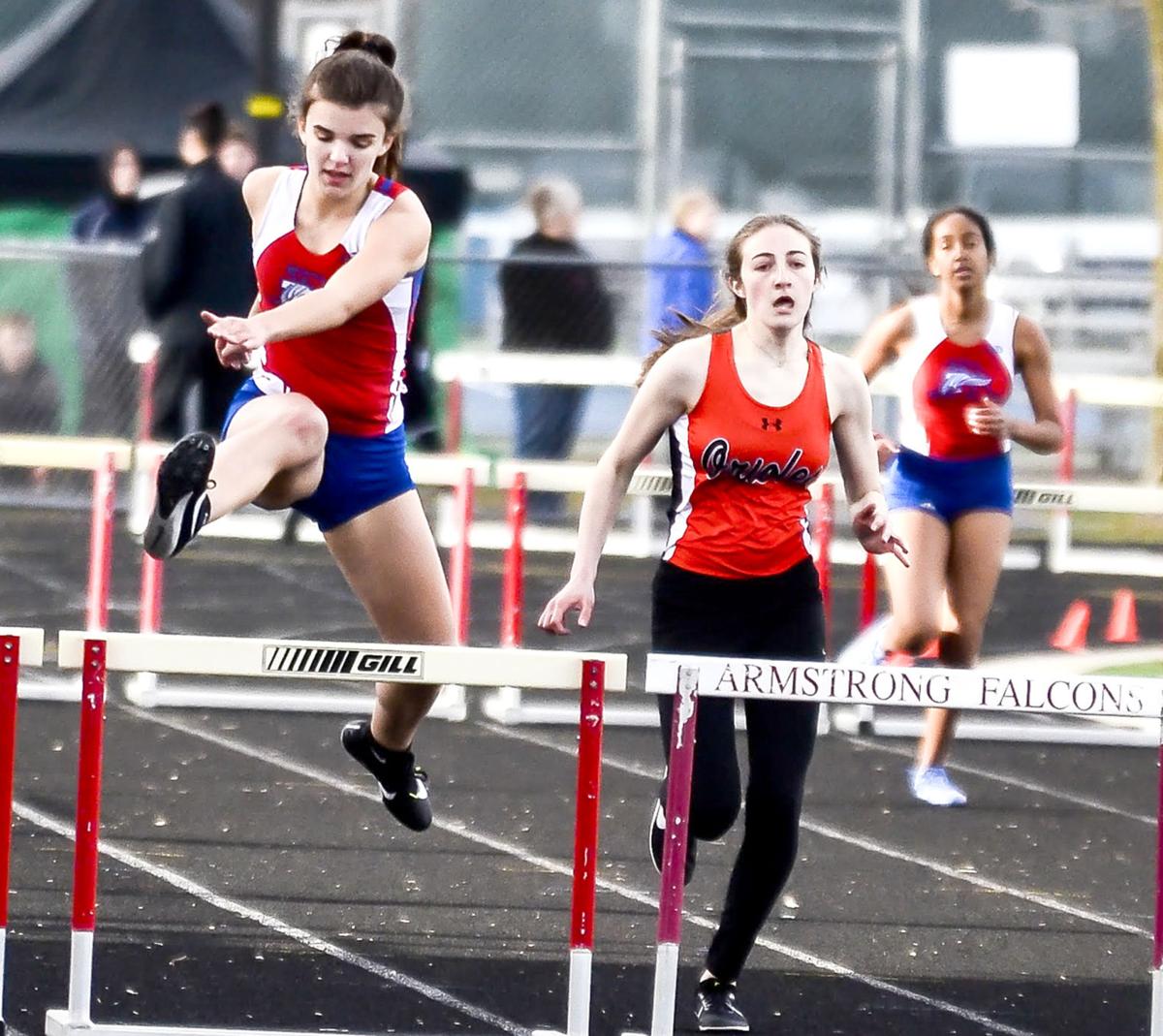 Armstrong sophomore Perri Thompson competes in the 300 hurdles in the 2019 Armstrong invite. Thompson was expected to be one the leaders in the hurdles for the Falcons in 2020.

Armstrong senior Carlene Neuville begins the 4x800 relay in the 2019 Armstrong invite. Neuville was one of several seniors back in 2020.

Armstrong senior Rachael Ukestad races in the 4x100 relay at the Northwest Suburban Conference meet in 2019. Ukestad was slated to be a captain in 2020.

Armstrong sophomore Perri Thompson competes in the 300 hurdles in the 2019 Armstrong invite. Thompson was expected to be one the leaders in the hurdles for the Falcons in 2020.

Lost senior leadership is one of the toughest aspects of the COVID-19 pandemic forced cancellation of the 2020 season for both the Armstrong boys and girls track and field team.

For the girls squad, senior captains Katherine Cannon and Rachael Ukestad and seniors Mya Erickson-Thrawl, Margo Heuisler, Carlene Neuville, Annika Russell, Jennifer Krey, Chanel May and Kathlyn Wagner were some of the top returners who compete in conference and/or sections in 2019.

Armstrong is used to having seniors pass traditions down to the freshmen, which coach Derek Fisher called “passing the torch.”

“When you don’t have your senior class pass it to your ninth graders – technically next year I am going to have ninth and 10th graders who don’t understand the Armstrong way of how we communicate, how we operate, the dos and don’ts and the traditional stuff that they pass on now,” Fisher said. “That’s kind of going to get lost, and we have to somehow wheel that back in.”

Fisher said that Armstrong has a rich tradition of seeing outgoing seniors bond together and seeing them hang out with the younger classes and even coming back later to see everyone.

Erickson-Thrawl was with the program for several years, and she sent Fisher a photo from the Armstrong track after picking up her cap and gown. She took the photo in a starting stance, which Fisher thought was cool to see.

“She somehow got out on the track with a cap and gown and said, ‘One last time,’” Fisher said.

Erickson-Thrawl was 10th in the 6AA section meet in the high jump, and Ukestad had a top-15 finish in the long jump.

Cannon was a hurdler and jumper, and Heuisler and Neuville, who started in eighth grade, were both distance runners coming into the year. Wagner was a jumper, and Russell, Krey and May were throwers.

And it was tough for them with the ebbs and flows of the COVID-19 pandemic shutdown. At first, Fisher and the coaches were sending social media stuff to encourage athletes, and they held hope that they would be able to compete in at least one meet together.

During the shutdown, coaches sent out workouts, and they remained creative to keep everyone engaged by creating a survey with fun facts about the coaching staff – having students guess who competed in track and field college and who went to state in high school.

The season was officially canceled on April 23, and Fisher had to send out an email to the senior class, which was not the way he wanted to end the season.

“Now I had to send out an email to my seniors, and some of those kids were banking on times this year to help them with school,” Fisher said.

There will be a large group of expected returners in 2021, but next year’s freshmen and sophomore classes will be hard to predict.

Junior Lou Himes will also be expected back after taking 12th at sections in the pole vault last year, and junior Ephemian Bailey is another returner who took sixth in the Northwest Suburban Conference meet in the discus last season and also had top-15 finished in the discus and shot put at sections.

“When we get them young and you see them keep working hard and the success that they have, you look forward to that,” Fisher said.

Sophomores Maylee Aldentaler (mid-distance, distance), Noelle Brandes (distance), Sarah Osborne (sprints) and Marlee Fisher (thrower) will be some of the lone juniors with experience in 2021.

Sophomore Perri Thompson is another hurdler who worked hard in the offseason and was expected to make strides this year.

“She was doing some training and working on the hurdles,” Fisher said. “She definitely has potential to be really good.”

Freshman Karlee Fisher, Marlee’s sister, is a sprinter and a jumper who had a top-15 finish in the long jump at sections last year. Freshmen Clea Cesare (sprints, mid-distance) and Sydney Brost (mid-distance, distance) are also expected back.