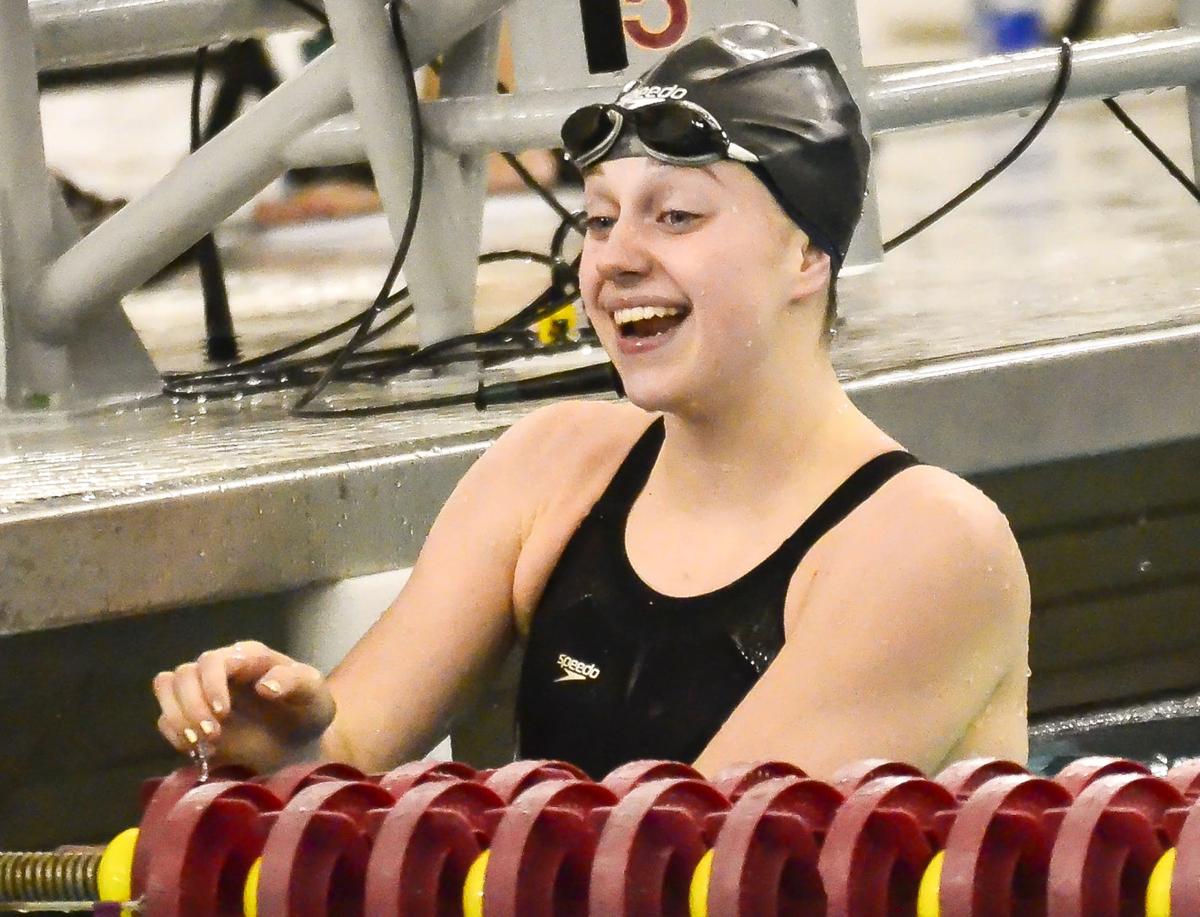 Armstrong senior Sierra Smith smiles after swimming to a Class 2A state title in the 200-yard freestyle in November. Smith was recently given the 2020 Minneapolis Athena Award for Armstrong. 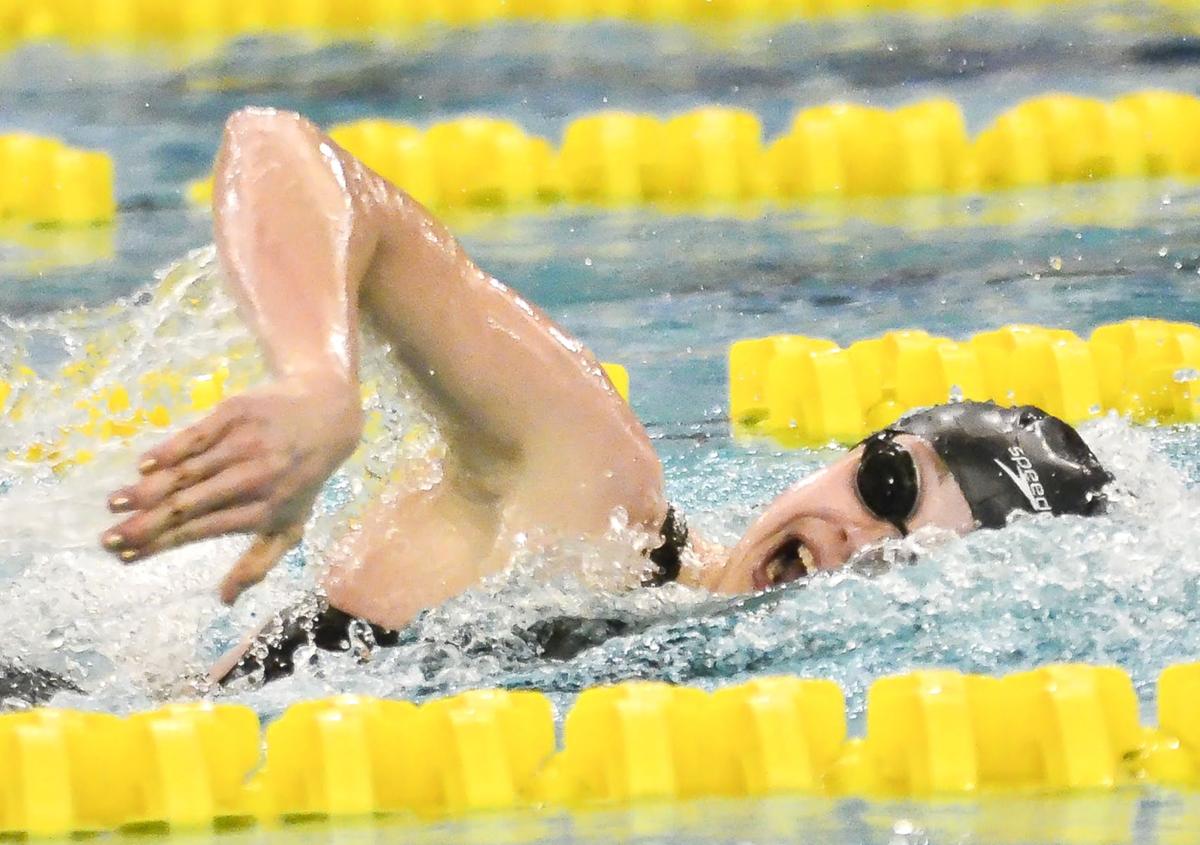 Armstrong senior Sierra Smith swims in the 200-yard freestyle finals in the Class 2A state tournament in November.

Armstrong senior Sierra Smith smiles after swimming to a Class 2A state title in the 200-yard freestyle in November. Smith was recently given the 2020 Minneapolis Athena Award for Armstrong.

Armstrong senior Sierra Smith swims in the 200-yard freestyle finals in the Class 2A state tournament in November.

Winning the Minneapolis Athena Award was not something senior Sierra Smith thought would be possible, but she was ultimately chosen as Armstrong’s 49th recipient in 2020.

Smith is a swimmer and not a multi-sport athlete, though she lettered on varsity for six seasons beginning in seventh grade. That made her believe she didn’t have enough to win the award.

“A while ago, I just started swimming because I wanted to swim,” Smith said. “And these last couple of years, I was seeing the people that won the Athena Award and I was like, ‘Wow, they really did a lot more than me.’”

“I was really surprised when I found I was honored,” Smith said. “It really means a lot to be a part of that group.”

Smith, who is attending the NCAA Division I University of Missouri to continue her swimming career, holds four school records – 50-yard freestyle, 100 free, 200 free and with the 200 medley relay.

Smith began swimming at five-years old. She first watched her brother, Connor, swim and practice. But he later told her swimming was better than watching, and that propelled her to begin the sport and find out for herself.

Both were able to swim together for a few years and cheered each other on at meets, and now both of them are side-by-side on the Armstrong school records board for the 50 free, which is one of her favorite stories to tell about her swimming career.

“Having him at the meets is just so encouraging,” Smith said. “I am not just swimming for myself anymore when I have all of my family and friends there. I am swimming for all the people that have encouraged me all my life.”

Smith said that swimming on varsity since seventh grade made a big difference for her one sport resume – showing consistency every season and having a strong finish in the latter half of her high school career.

And this past season, she claimed the 100 and 200 free state titles and also medaled with the 200 free relay. Her other state medal came in the 200 free as a sophomore, finishing third overall in 2017.

Smith finished with eight career state medals and 20 career section medals. She also has five conference awards and was named team MVP once.

Smith was also named the 5AA section Swimmer of the Year by the head coaches in the section, and she swam in the Speedo Junior National Championships in August 2019.

In the community, growing up in Plymouth, Smith worked at LifeTime Rockwall and led a kids’ climbing class. She also was an athlete representative for USA Swimming.

“I feel like I’ve just been doing what I enjoy to do, so I really enjoy making pizza and working at the rockwall,” Smith said. “I just like to look for volunteer opportunities that are fun for me so I feel like that helps encourage me to do them more often.”

Academically, Smith was on the Postsecondary Enrollment Options Dean’s List at the University of Minnesota. PSEO is a way for high school students to complete college-level courses for both high school and college credit.

Smith is a member of the Spanish Honor Society and is going to study psychology and Spanish at the University of Missouri.

“As long as I have tried my hardest, I think it’s good enough so it’s just fun to push myself.”

Smith said that she was initially sad when she heard that the luncheon was canceled, but she understands the reasons why it needed to happen.

“It would have been a fun experience to have,” Smith said. “But I think there are other things to prioritize. With everything shutting down, it makes sense.”

Smith is one of several athletes who need to adjust to the current social distancing guidelines due to the COVID-19 pandemic, and the adjustment period in the beginning was difficult, she said.

But now, she is enjoying the outdoor time and building up her mental and physical health as she prepares to graduate and get ready for college.

“I was just so used to swimming, and I’ve never really only done land activities to stay in shape,” Smith said. “But now, since it’s so nice out, I’ve just really loved waking up and working out, pushing myself outside in the morning and feeling good for the day.”

Smith said that everyone is going to be excited to get back in the pool, and that can help “reignite” swimmers’ love for the sport.

And adding dry-land training is something that can help diversify how Smith gets ready for competition in the future, as well, she said.