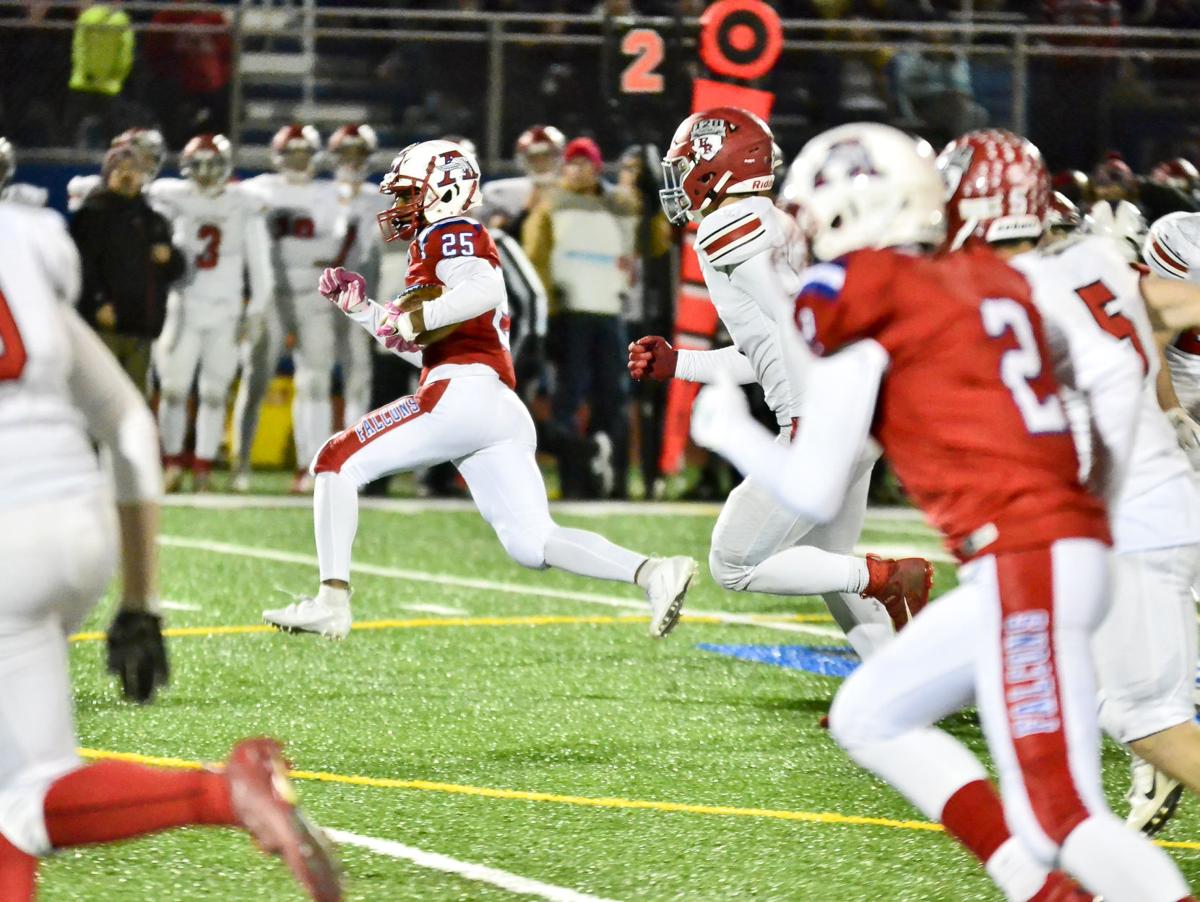 Armstrong junior running back Caleb Jones runs for a 50-yard touchdown in the second quarter Nov. 1 in a 6AAAAA section final against Elk River at St. Michael-Albertville High School. Jones carried the ball 13 times and had 89 yards and three touchdowns, but the Falcons fell just short of state in a 32-29 loss. 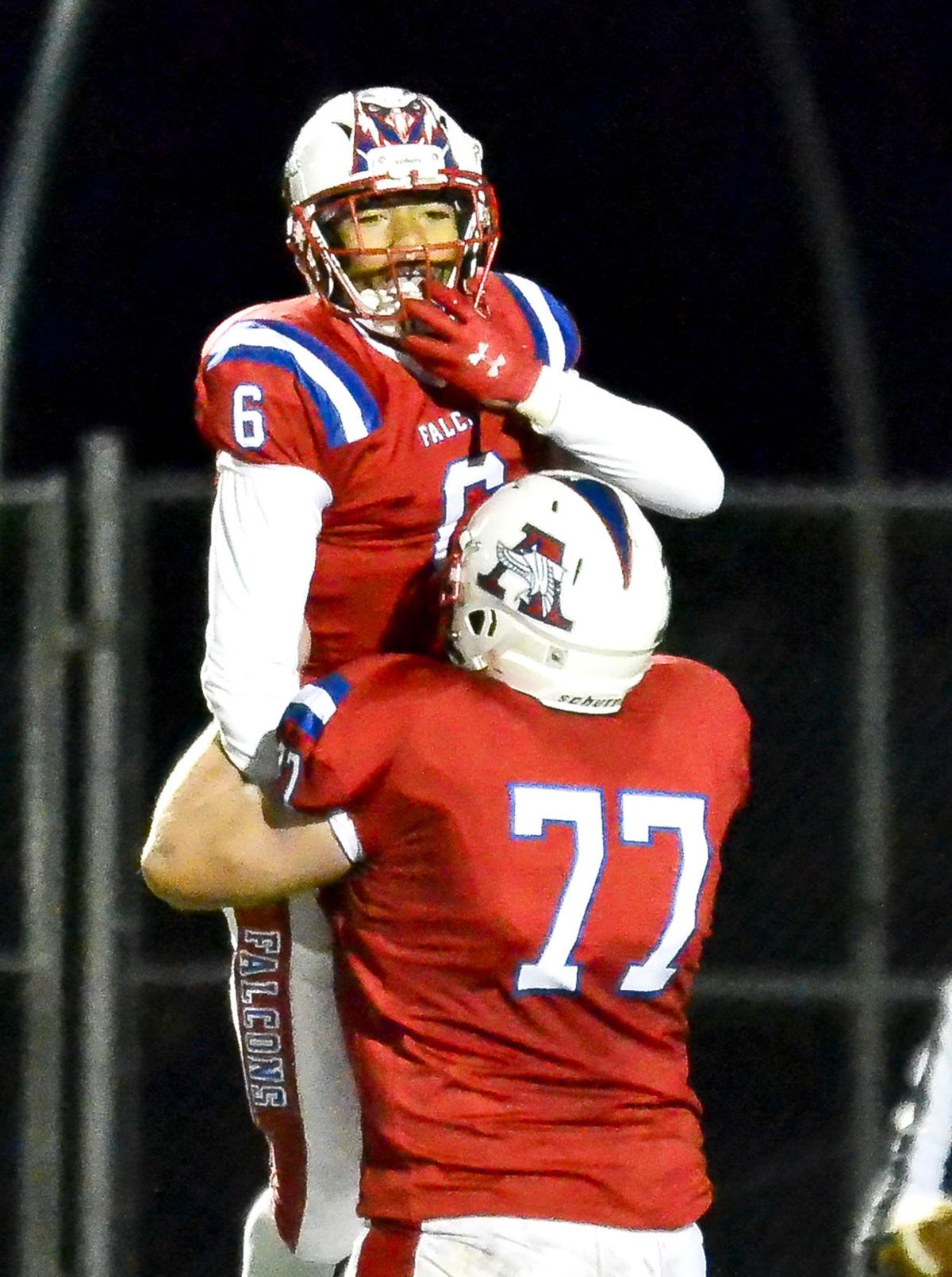 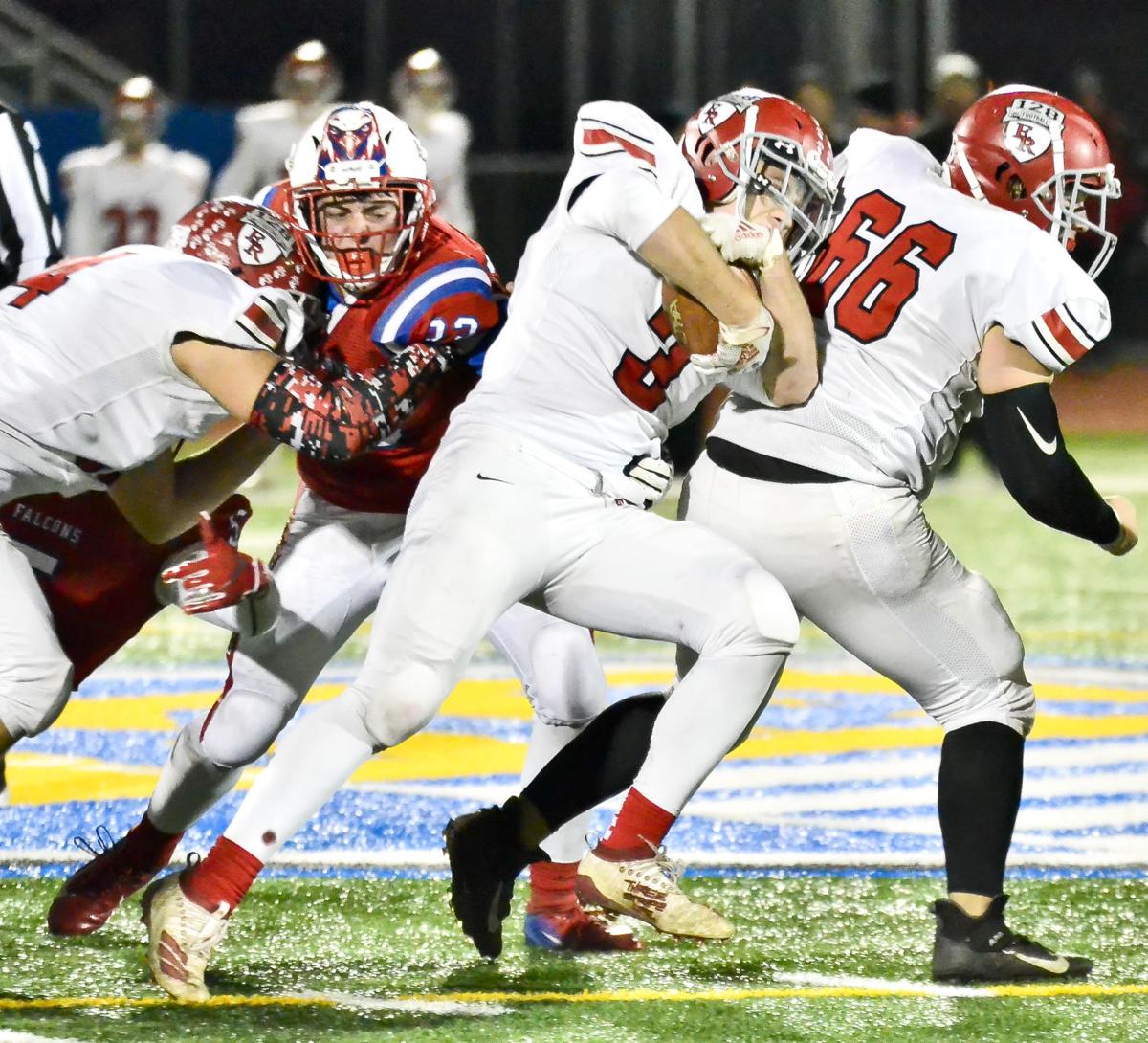 Armstrong senior defensive lineman Jude Rognstad fights off a block before recording a tackle on a run by Elk River senior running back Joe Nordstrom on Nov. 1 in the 6AAAAA section final at St. Michael-Albertville.

Armstrong junior running back Caleb Jones runs for a 50-yard touchdown in the second quarter Nov. 1 in a 6AAAAA section final against Elk River at St. Michael-Albertville High School. Jones carried the ball 13 times and had 89 yards and three touchdowns, but the Falcons fell just short of state in a 32-29 loss.

Armstrong senior defensive lineman Jude Rognstad fights off a block before recording a tackle on a run by Elk River senior running back Joe Nordstrom on Nov. 1 in the 6AAAAA section final at St. Michael-Albertville.

The end of the 2019 Armstrong football season was not what the Falcons envisioned following a district title, an undefeated start, a top seed in the 6AAAAA section and a No. 2 ranking in the state.

Armstrong (9-1 overall) fell just short of reaching state Nov. 1 in a 32-29 loss to Elk River at St. Michael-Albertville High School. The game was back-and-forth, and the Falcons went out fighting in the final minutes as ice and snow turned the field from green to white in the fourth quarter.

After the Elks earned the final first down before kneeling twice to seal the win, reality began to set in. Seniors hugged but many felt the hurt of having their high school careers come to a close – either crouching on the field and writing in the snow or looking around and taking in the grid iron with their teammates one last time.

As the dust settles on the 2019 season, the Falcons milestones will overshadow the stinging defeat to an Elk River program that has now been to state four straight seasons – winning the Class 5A title in 2015 and finishing runner-up in 2017– and has an established misdirection run scheme with multiple weapons.

Armstrong won its third straight Suburban Blue title, though this was the first season that there were seven teams in the sub-district rather than just four teams.

The Falcons won all eight regular season games and added a ninth win over Monticello in the section semifinals. That was the most wins in a season from 2004 to 2019. Armstrong had seven wins in 2015 and six wins in 2004.

Together, the seniors leave a legacy of helping to complete one of the best seasons in program history, and the juniors, sophomores and freshmen can build on that legacy next season and beyond.

Both Elk River and Armstrong started fast in the section final, trading touchdowns in the first six possessions of the game.

But the difference came at the end of the first half and the start of the second half.

Senior running back Joe Nordstrom scored on a 3-yard run, and junior running back Carter Otto ran for a two-point conversion to give the Elks a 24-23 lead with 5 minutes, 58 seconds to go in the second quarter.

The Falcons were then forced to punt for the first time after a three-and-out, and Elk River drove into Armstrong territory before Sesay forced a Nordstrom fumble that Young recovered with 2:03 to go in the first half.

After a holding penalty pushed the Falcons back, Breitbach hit College for 13 yards and then rushed the ball for 13 yards to set up a first-and-goal.

But just when it seemed Armstrong would be headed to the locker room with a lead at halftime, Breitbach was forced out of the pocket, nearly sacked and eventually picked off by senior defensive back Nicklaus Gill.

Elk River started with the ball in the second half and ran a 12-play, 58-yard drive that took 6:20 off the clock. Otto punched in a 2-yard touchdown run to finish the drive, and senior quarterback Beau Ruby threw to a wide open Otto for another two-point conversion to make it 32-23.

The defense improved against the stout rushing attack of the Elks for much of the second half. A tackle for a loss gave the ball back to Armstrong on a fourth down stop on Elk River’s second drive of the third quarter, and Ayala recovered a fumble on the Falcons’ 1-yard line to keep hope of a comeback alive with 5:45 to go.

The offense then did what it did best all season – make clutch plays. Armstrong drove 99 yards in just over four minutes to score a touchdown.

Breitbach was 5-for-8 on the drive for 52 yards – completing passes to College, Barrett and Chiaokhiao-Bowman – and he also carried the ball six times for 46 yards. Jones punched in the score on a 1-yard run.

The Falcons went for two but Chiaokhiao-Bowman was tackled on a run about a yard short of the goal line, keeping the deficit at 32-29 with 1:40 to go.

Armstrong couldn’t recover an onside-kick attempt, and junior running back Ryan Wilson was able to get a first down after the Falcons used all of their timeouts.

Jones had a monster game with O’Driscoll limited to one carry. He finished with three touchdowns, including a 50-yard run in the second quarter, and had 13 carries for 89 yards.

A fumbled snap on the first point-after attempt, following a 5-yard touchdown run by Jones, led to a two-point conversion when Major took the ball and ran it into the end zone to make it 8-0 Armstrong.

Bies kicked an extra point on the second touchdown, and Chiaokhiao-Bowman caught a two-point conversion pass on the third touchdown to make it 23-16 Falcons.