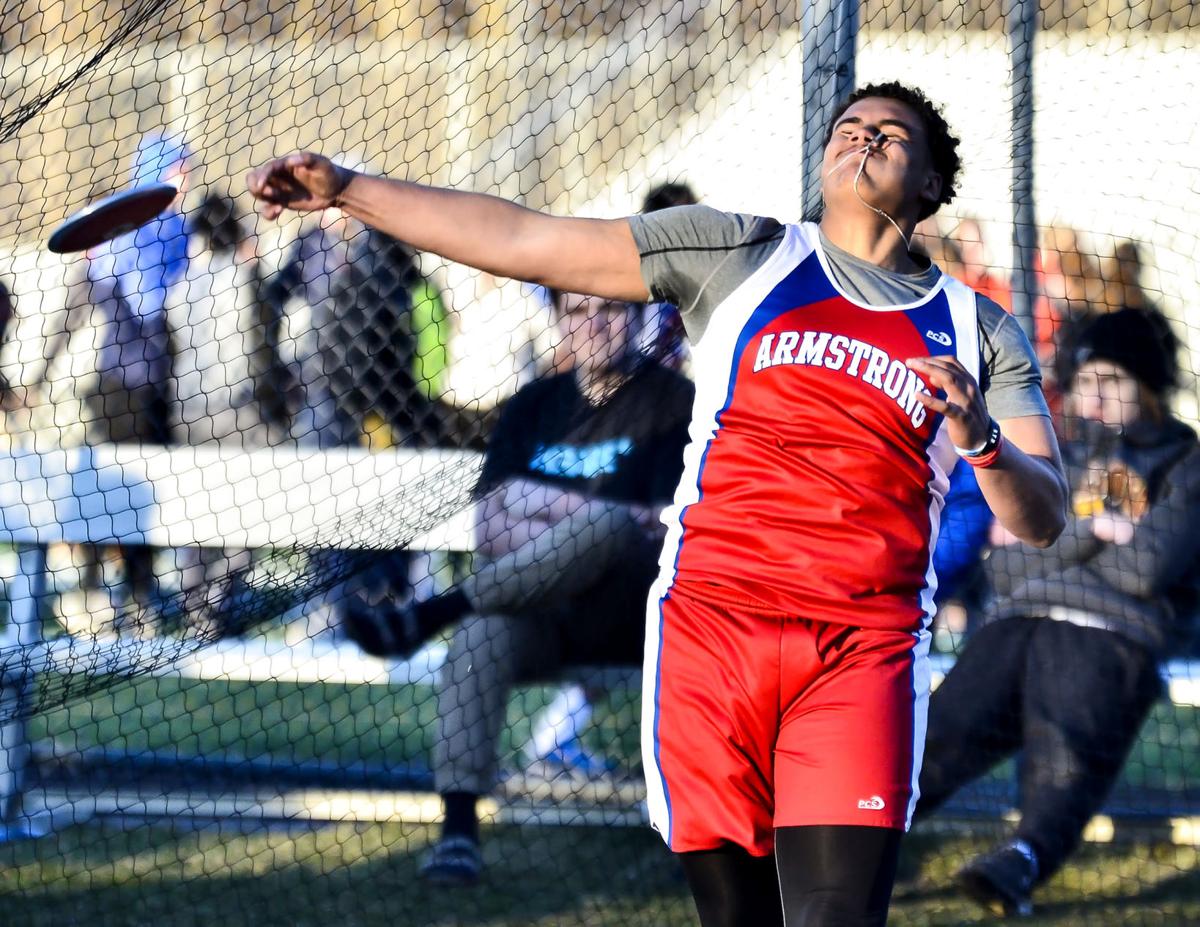 Armstrong senior Dacion Francis releases his throw in the discus in the 2019 Armstrong invite. Francis was one of several seniors who medaled at sections that was supposed to lead the Falcons in 2020. 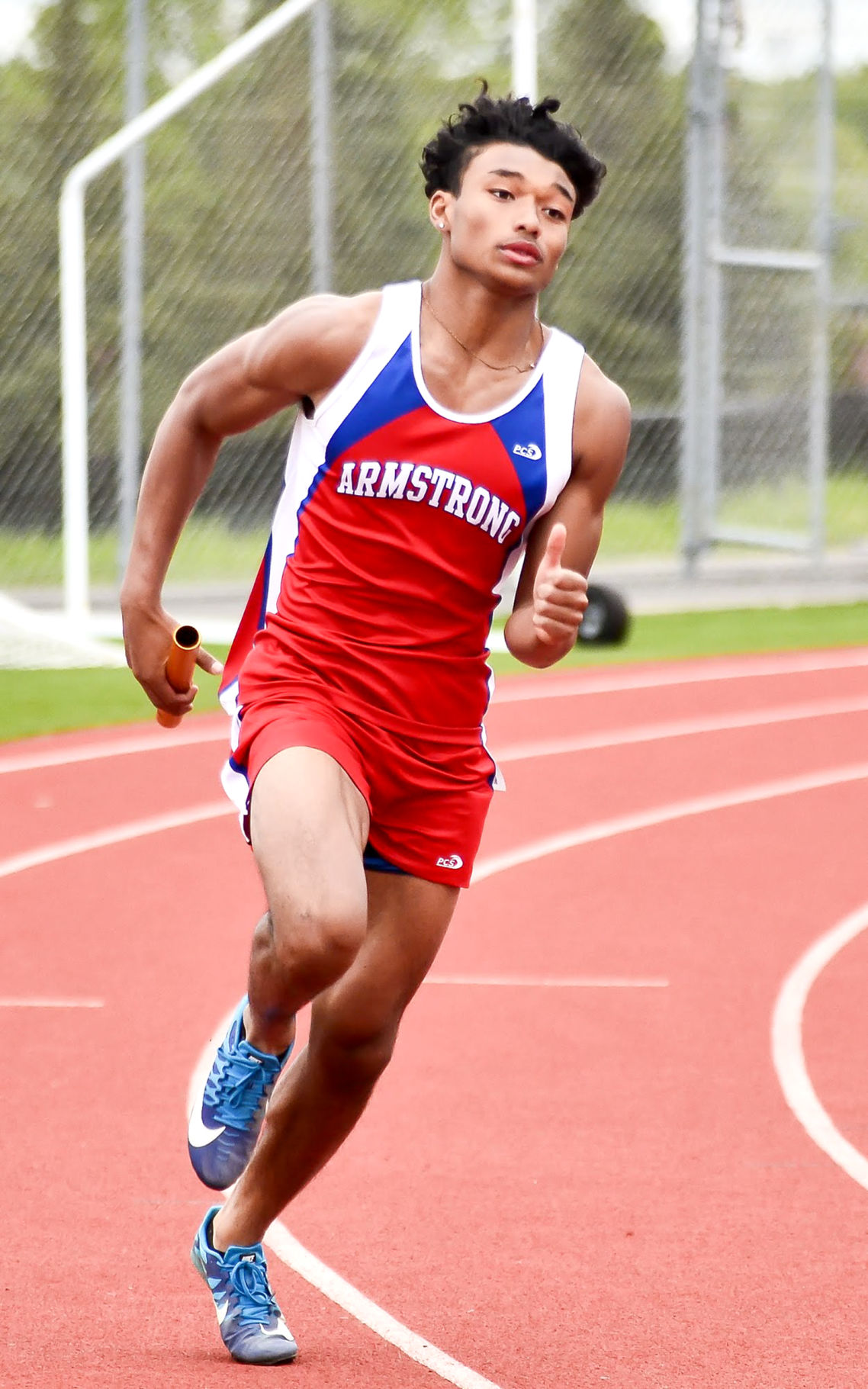 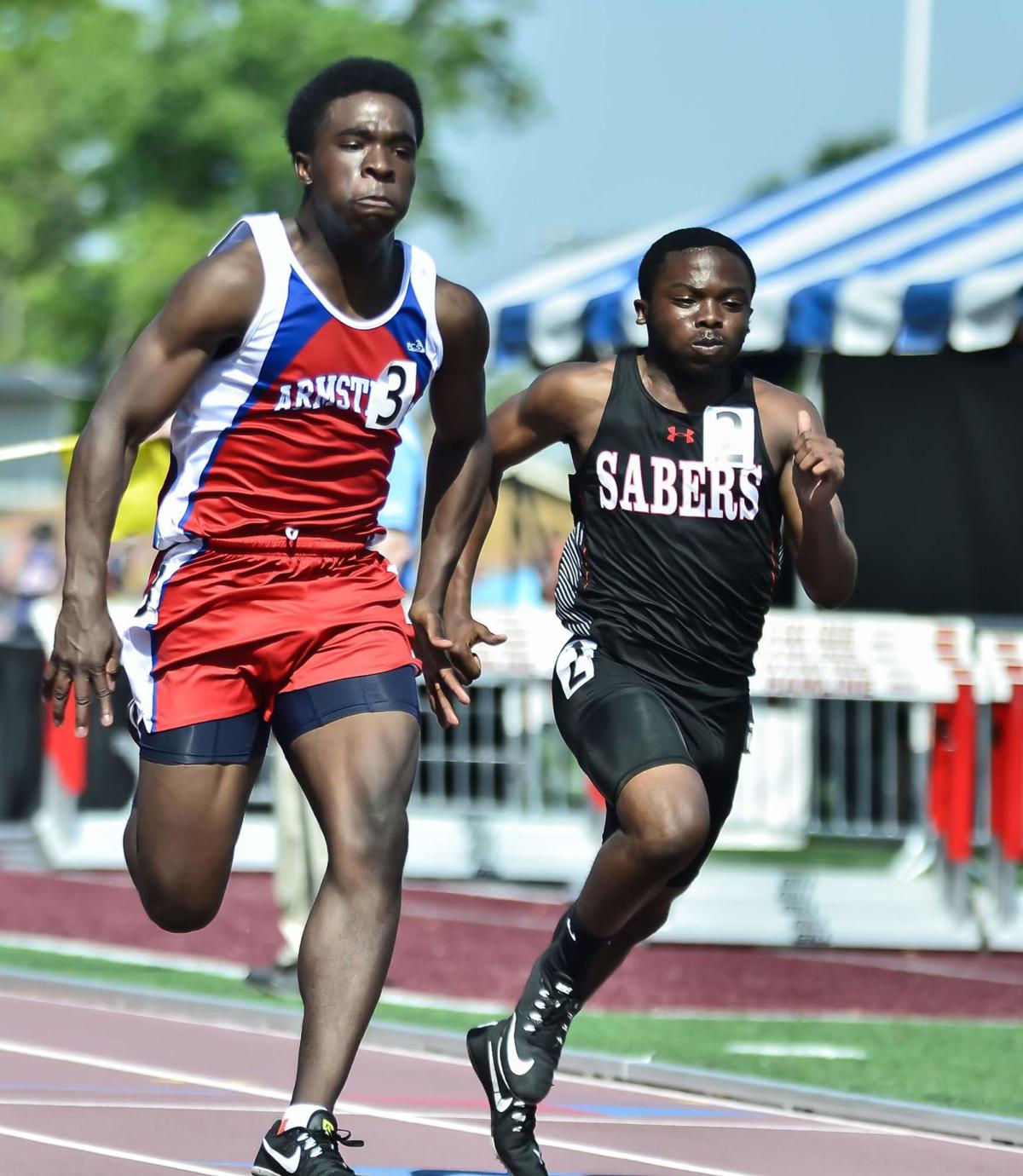 Armstrong junior Zeke Clark races in the 100-meter dash in the Class 2A state tournament in 2019. Clark is the top sprinter slated to return in 2021.

Armstrong senior Dacion Francis releases his throw in the discus in the 2019 Armstrong invite. Francis was one of several seniors who medaled at sections that was supposed to lead the Falcons in 2020.

Armstrong junior Zeke Clark races in the 100-meter dash in the Class 2A state tournament in 2019. Clark is the top sprinter slated to return in 2021.

Armstrong boys track and field was looking forward to a lot of success in the 2020 season, especially with the senior class.

The seven top returning seniors were Kham Chiaokhiao-Bowman, Danny Bies, David Hurst, Dacion Francis, David Thomas, Thomas Brandes and Aboubacar Kourouma, and the most graduations from the 2019 team were with distance runners meaning that the sprints and field events were going to remain strong.

“I felt really good about my boys program this year,” coach Derek Fisher said. “It was a real solid senior class for us. That was tough.”

Chiaokhiao-Bowman was a state qualifier in the long jump after taking third in the 6AA section and Northwest Suburban Conference meets last season. He also ran on the 4x100 and 4x200 relays.

Chiaokhiao-Bowman is headed to St. Thomas More Prep in Oakdale, Connecticut, for a postgraduate year to better prepare for college both academically and athletically.

Bies was one of several 6-foot high jumpers expected back and is headed to NCAA Division III Gustavus Adolphus College to play football. Bies finished tied for third at conference and fourth at sections in the high jump. Bies also competed on the 4x100 and 4x200 relays.

Kourouma was a sprinter who also competed with the 4x100 and 4x200 relays, and all of those seniors were also on the Falcons’ football team that made the 5AAAAA section final this past season.

Juniors Carlos Ayala (jumps) and Abdullahi Osman (hurdles, 4x400) were also on the football team and were coming out for track.

Fisher said the work the football players put in to have their successful season was rolling over into track and field. And they were getting other football players to join the program, as well.

“As a coaching staff we were really excited about that,” Fisher said. “I always felt football and track should go hand-in-hand.”

Brandes (mid-distance, distance) and Thomas (jumps) were also seniors that were expected back to bring leadership to the younger classes.

Clark spends his off-seasons running with the Minnesota Flyers for club track and field, and he qualified for the New Balance Indoor National Championships with the 4x200 relay championship and in the 60-meter dash for emerging elite.

But the meet was canceled due to the pandemic.

“We had big things planned for (Zeke),” Fisher said. “He worked so hard at it. You look at what he does for the offseason, running club. He qualified for New Balance, which is the mecca for track and field. All of our kids try to get to that level.”

And although Clark will get his senior season in 2021, missing out on a high school season this year also is tough for him.

Clark has been competing in virtual meets with the Minnesota Flyers, but it isn’t the same as being on the track and in races next to others.

Clark is an athlete who is so serious about track, he got a starting block for Christmas, Fisher said.

“He loves track and field,” Fisher said. “He wants to run at the next level. Not having his junior year time to send out to schools, it really puts a big damper on a lot of things we do as coaches for our student athletes.”

Other juniors expected to come out in 2020 were Owen Hansmann (distance) and Dylan Bartness (distance), Christian Toledo (hurdles, jumps) and Riley Jaspers (jumps, pole vault). Jaspers was third at sections in the high jump last season.

All of those juniors were hard workers, with the distance guys finding places to run in the winter and others getting ready for the season, Fisher said.

“I was really excited to see the combination with our senior leadership,” Fisher said.

Sophomores James Higgins (sprints), Elrad Towah (sprints) and Erik Fredrickson (hurdles) were other younger guys back with some experience.

Towah was especially looking to grow on the track as a sprinter who “shows signs that he can be dominant,” Fisher said.

“Those three kids really would have been a key for us, and that’s what I was really excited about because with the boys – they make a big jump as they get older,” Fisher said.

The month of waiting to see if these guys would have a season was challenging for Fisher, who said the Falcons were able to get a week of practice in to get a feeling for what was coming.

Coaches handed out workouts and tried to keep kids engaged in creative ways – including creating a survey with fun facts about the coaching staff to see if kids knew which coaches competed in track and field in college or made state in high school.

But in the end, the season was canceled on April 23 along with all spring sports and activities in the state.

And how tough it was to email the team and not be able to get on the track to coach them one last time, Fisher said it is also going to be interesting to see how it affects the future.

Normally, the seniors pass down traditions to the younger classes, and Fisher usually seeks out ninth graders to get on the team.

Next year, Fisher is going to have to find both freshmen and sophomores who are serious about track.

“I am going to have to seek those kids out and get them with Zeke or get them with Christian and some of my returning juniors and kind of take them under their wings early,” Fisher said. “Because really, for us, that’s what’s been really powerful.”