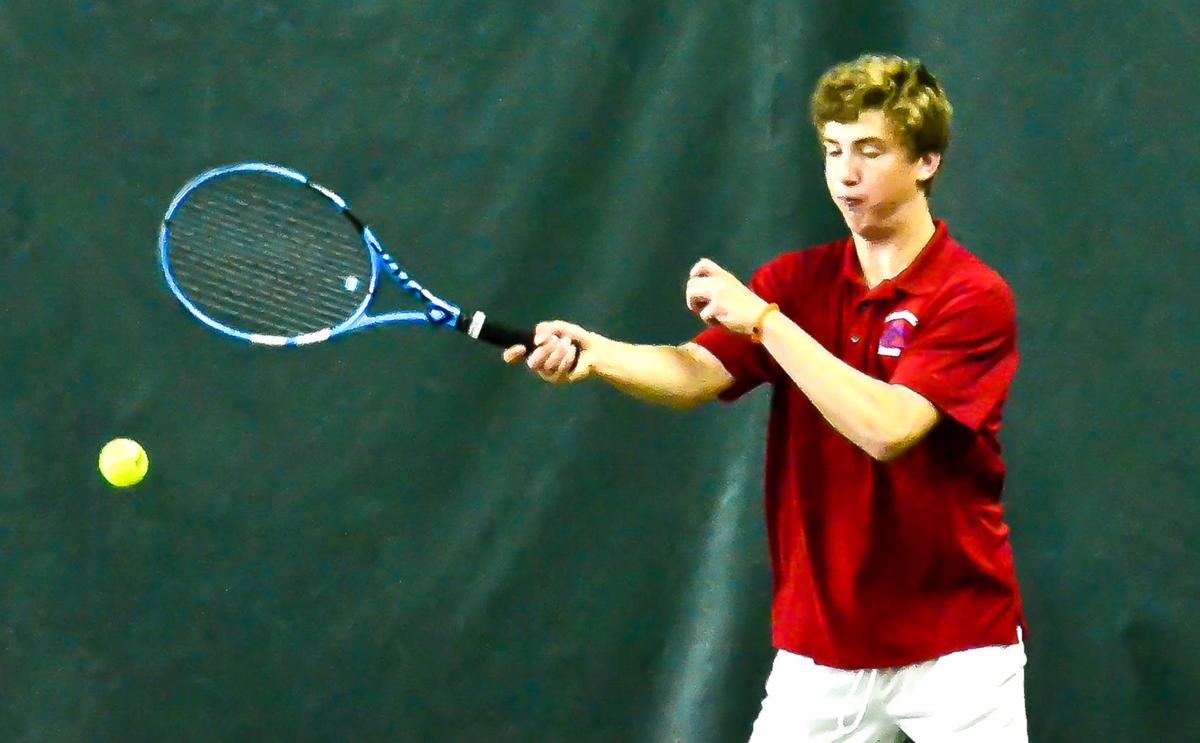 Armstrong senior Evan Axell hits a shot on the back line in the 5AA section individual tournament. Axell played with junior Ben Lithun in the doubles bracket at sections, and both captains were expected to not only lead the Falcons in 2020 but to also make state after taking fourth in the section tournament last year. 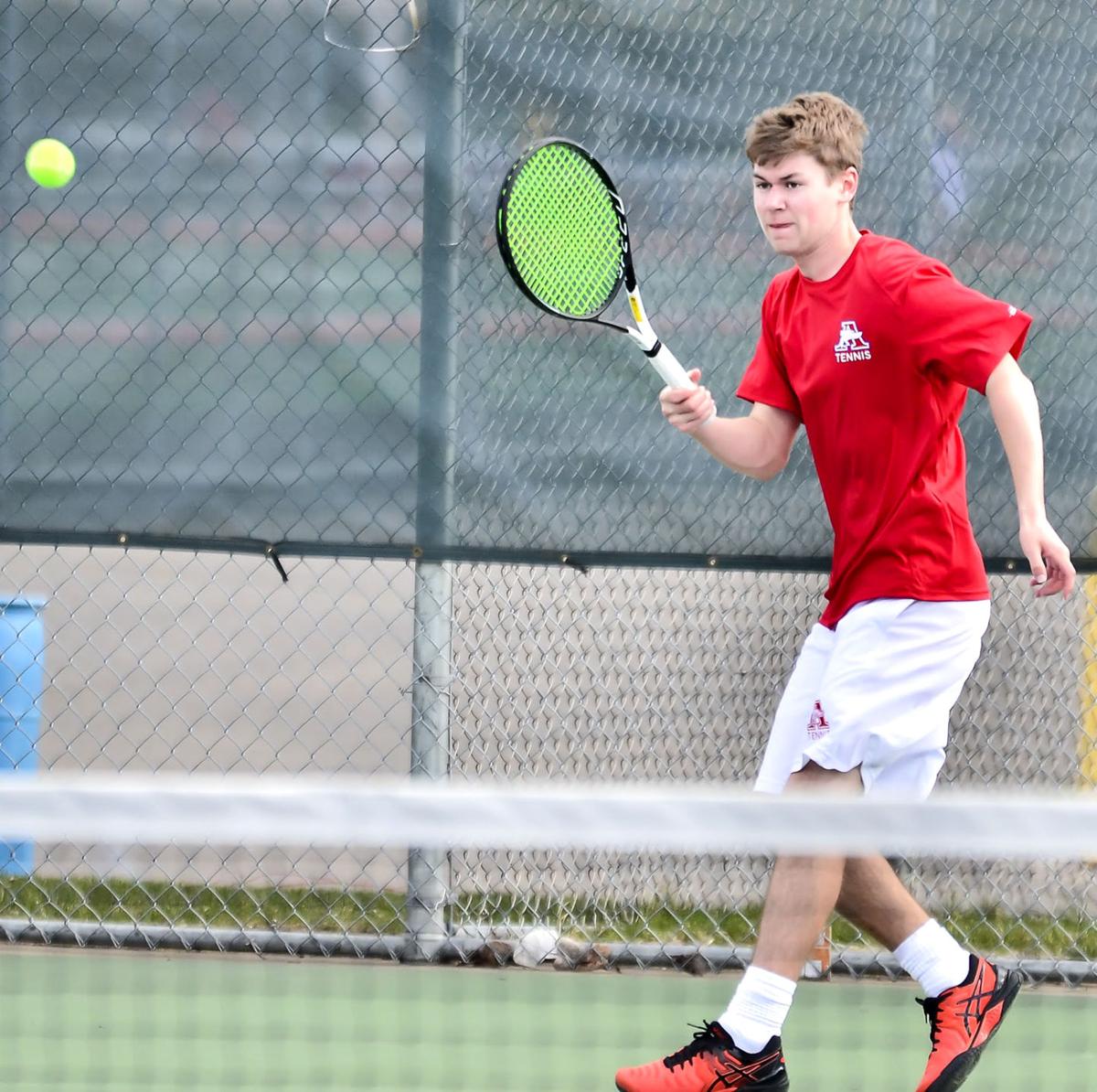 Armstrong senior Tony Rausch hits a forehand shot in a regular-season match in 2019. Rausch was expected to be the No. 2 singles player in 2020. 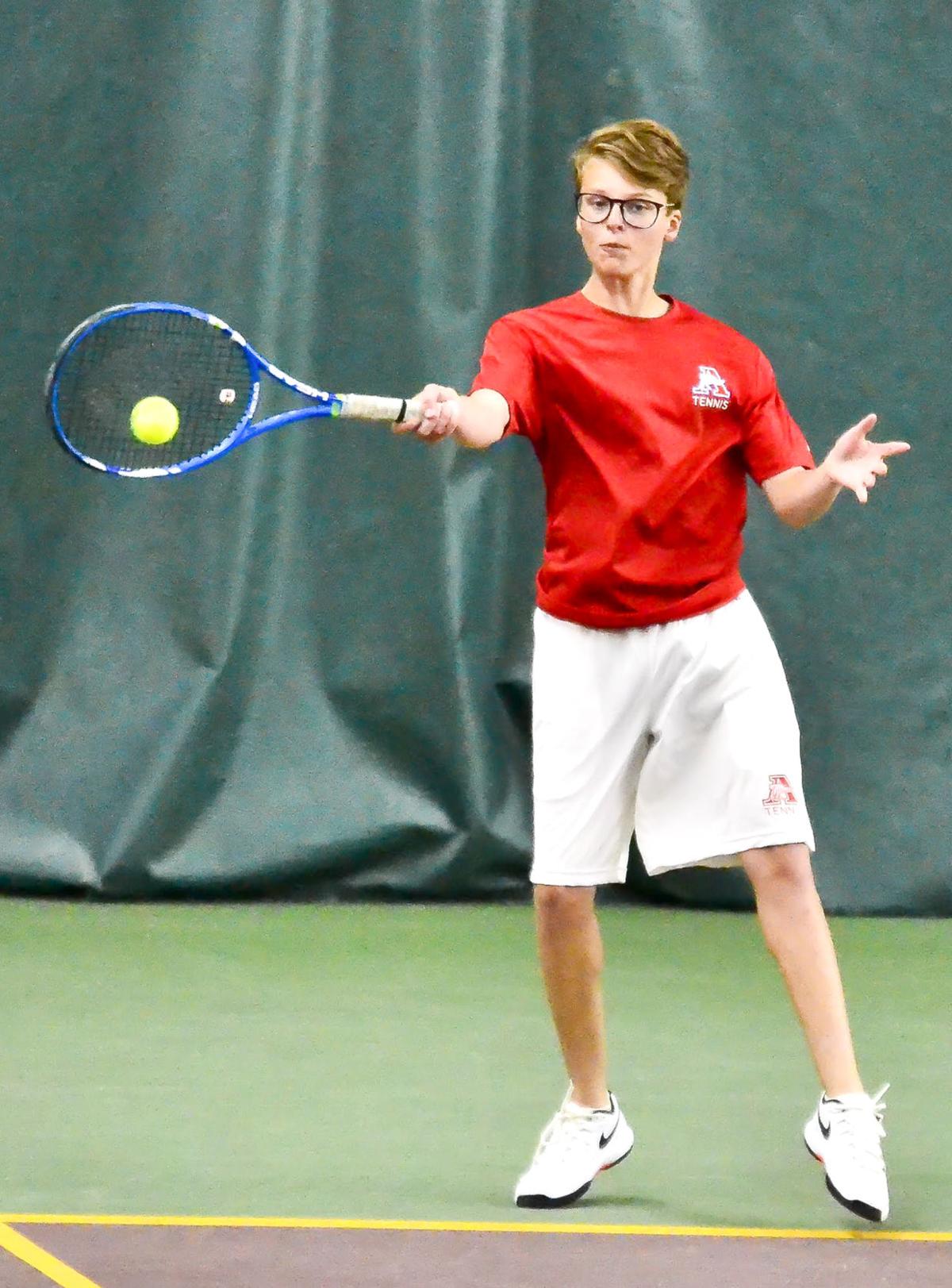 Armstrong senior Dan Goldstein returns a serve in the 5AA section individual meet in 2019. Goldstein is a singles and doubles player that was going to help the Falcons in 2020.

Armstrong senior Evan Axell hits a shot on the back line in the 5AA section individual tournament. Axell played with junior Ben Lithun in the doubles bracket at sections, and both captains were expected to not only lead the Falcons in 2020 but to also make state after taking fourth in the section tournament last year.

Armstrong senior Tony Rausch hits a forehand shot in a regular-season match in 2019. Rausch was expected to be the No. 2 singles player in 2020.

Armstrong senior Dan Goldstein returns a serve in the 5AA section individual meet in 2019. Goldstein is a singles and doubles player that was going to help the Falcons in 2020.

Armstrong boys tennis played out 2019 with the goal of improving and getting ready for 2020, as almost everyone was expected to return.

Coach Dan Schink didn’t even get a chance to meet with the team before the spring. He said he had a planned team meeting on March 12, and about an hour before the meeting, he was told it had to be canceled because school was closed.

Spring athletics and activities were suspended, but at that point Schink was not worried about the season, as the first match for the Falcons wasn’t until April 9. But then the season was suspended again before ultimately being canceled on April 23.

“When I told my team I was planning on having a better year than we did last season, I never meant that we were going to go undefeated by not playing any games,” Schink said. “It’s been quite an ordeal and hopefully we can somehow find a way to grow and turn this into a positive experience long-term.”

Lithun was the No. 1 singles player, and Axell was a No. 1 doubles player for most of 2019, but the two joined forces in the 5AA section meet and ended up taking fourth overall in doubles after making the semifinals.

Schink said he was looking forward to both playing together again in the 2020 individual section, as both were expected to be in the running for a state berth again.

“There was no reason that they didn’t have high hopes for their season,” Schink said.

Luke Pilon played Cooper baseball as a freshman and sophomore when he was homeschooled, but he enrolled at Armstrong as a junior and wasn’t eligible for baseball. So he decided to come out for tennis.

He had to sit out one varsity season but was going to be in the lineup in 2020.

“He was finally going to get to play and was all excited,” Schink said. “He was going to be a big help. He was kind of going to be our secret weapon because he should have been on varsity the year before but didn’t get a chance to play.”

Rausch was going to be the No. 2 singles player who set up his Post-secondary Education Options schedule to be able to fit the tennis season in.

“He loves tennis,” Schink said. “He lives and breathes tennis. He was all excited and very passionate, and I think it was very hard for him.”

Goldstein played with Axell on No. 1 doubles for most of the regular season. Schink said he was a “great kid.”

Theisen was another senior who helped on both singles and doubles. He played either No. 4 singles or No. 2 doubles. Schink said the “humble” Theisen started to show off his potential at the 2019 Lakeville North tournament in third-set super tiebreakers.

Nyquist was another doubles player that Schink said was another “awesome” player for the team. Harding missed part of the season in 2020 and was able to play as an exhibition match in the team section. Schink said he is really tall and just loves tennis.

“It’s just been a heartbreak, telling all of these kids that we were gearing up for not our first season, last year, but our second season,” Schink said. “So we didn’t care if we won or lost, we were really trying to grow last year so that we can have this phenomenal second season.

“And now we will never get the opportunity to play.”

Senior Cem Ogdur, an exchange student from Turkey, was also joining the team. And Schink said the process was probably the highlight of the 2020 season.

Schink received a letter of recommendation from his coach in Turkey. The letter said Ogdur had been playing at his academy there for a year-and-a-half and that he was a “mannerly and polite student.”

“I never even got to meet this kid, and this was basically my season to get this letter,” Schink said.

The team was also smart, Rausch said. The Falcons won the team silver academic award, and Luke Pilon, Nyquist and Goldstein were all qualifiers for the senior academic award. As a team, Armstrong had a 3.72 GPA.

Next season should still have some potential with Silas Pilon, Lithun, Thao, Doely, Choi, Dreyer, Merriam and Fridlund expected to return.

Lithun and Merriam will most likely be the No. 1 and No. 2 singles players. Pilon is also expected to contribute in the varsity lineup.

Thao and Doely are two doubles players that have been working on improving their games to be consistent. Choi is also a doubles player that can play singles as well making him valuable in the lineup.

Fridlund was on the cusp of being a varsity player last season, Schink said, and he could be a No. 4 singles player in the future.

Dreyer is another player that looks to put some things together after working on his serve in 2019 and showing signs of improvement with some aces toward the end of the season.