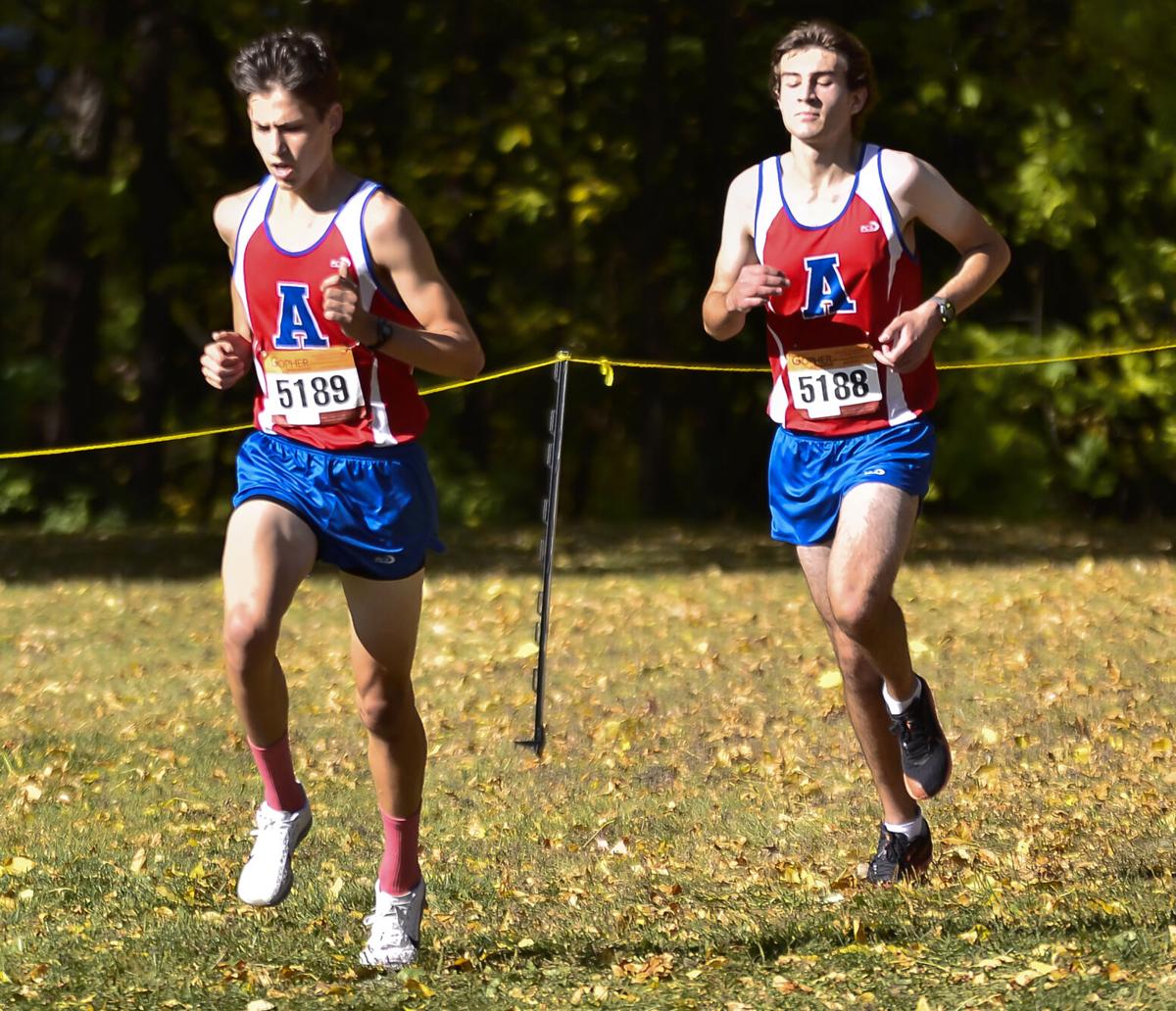 Armstrong sophomore Noah Breker (5189) and senior Dylan Bartness race together during the final 300 meters at the 5K course in the Northwest Suburban Conference boys cross country meet at Bassett Creek Park in Crystal. Breker took second overall in 16 minutes, 23.9 seconds, and Bartness was third in 16 minutes, 32.9 seconds. The Falcons won the conference title with a 34. 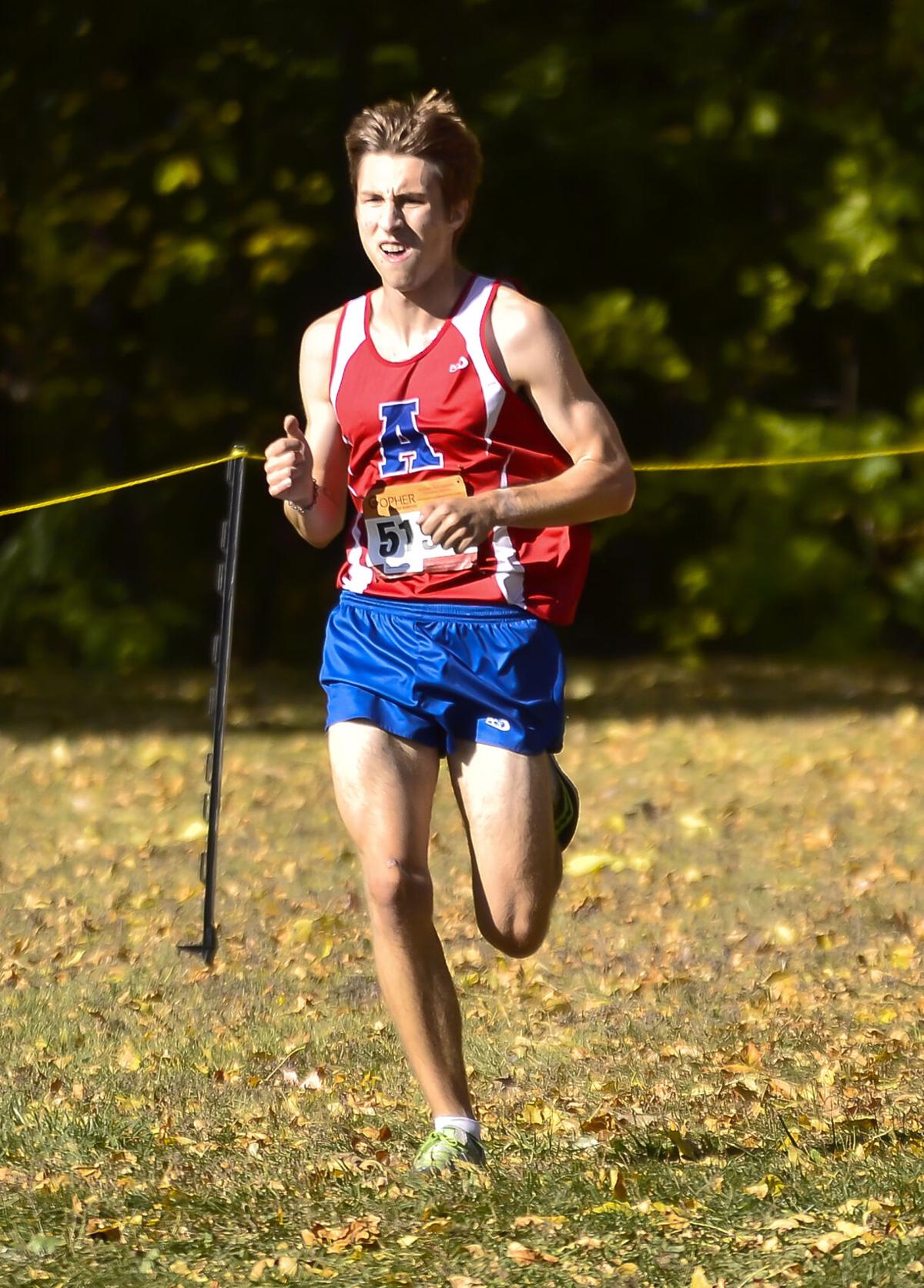 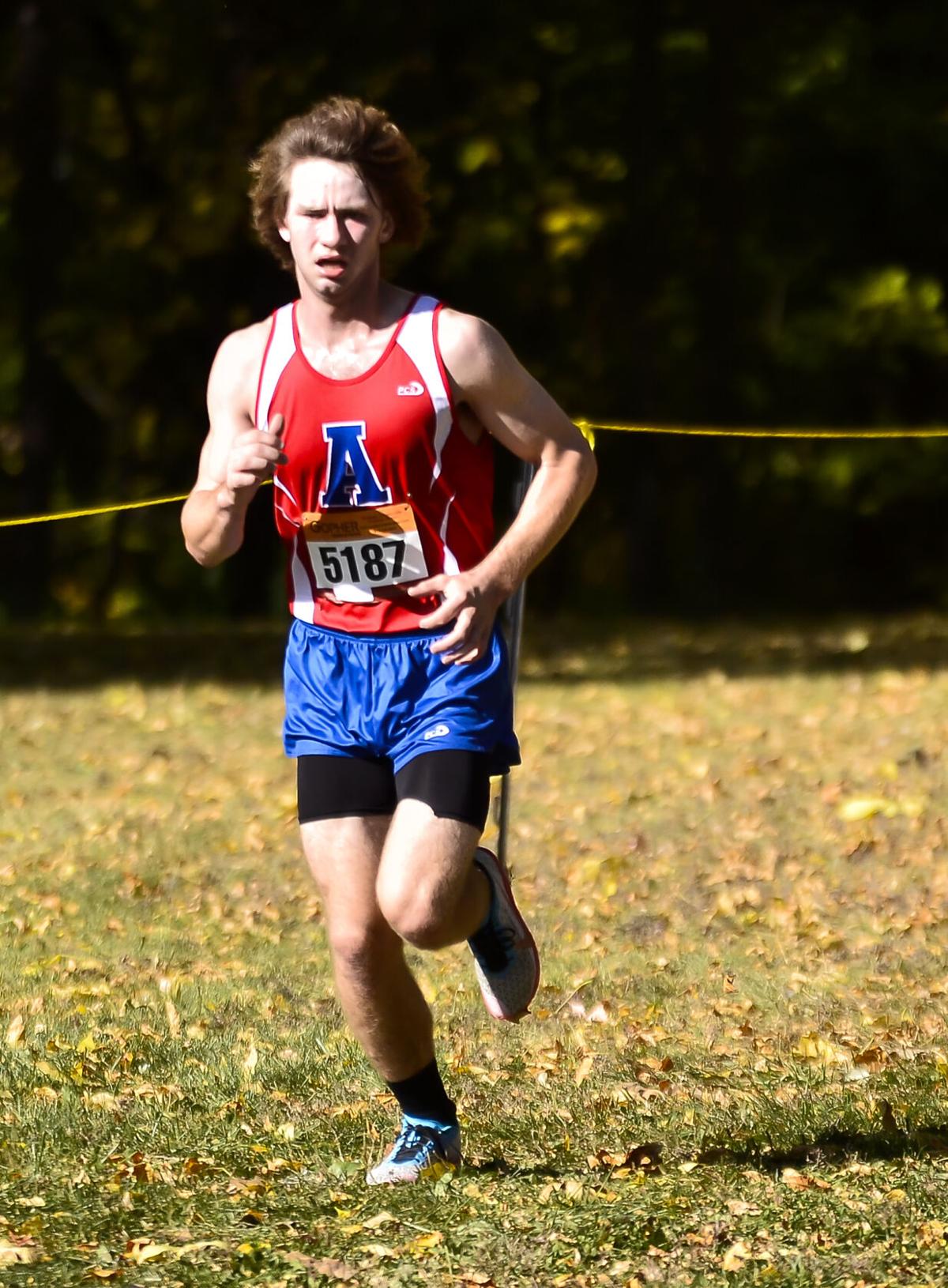 Armstrong sophomore Noah Breker (5189) and senior Dylan Bartness race together during the final 300 meters at the 5K course in the Northwest Suburban Conference boys cross country meet at Bassett Creek Park in Crystal. Breker took second overall in 16 minutes, 23.9 seconds, and Bartness was third in 16 minutes, 32.9 seconds. The Falcons won the conference title with a 34.

Teamwork was needed in 2020 more than any other cross country season in recent history due to smaller races.

The Falcons (8-0 overall) came into the Northwest Suburban Conference boys meet undefeated in dual meets, but there were no large invites this year and the conference race that broke down the field into five races of three or fewer teams with times being compiled all of the races.

That meant that knowing who to chase was more difficult, but Armstrong challenged itself from within, as runners pushed each other to take the conference championship with a 34 – finishing with five runners in the top 15.

“I have had teams that have had more talent than this group, but these guys work really hard and that’s why they are successful,” coach Robb Stephens said. “You have to be aggressive, and you have to rely on your own team oftentimes to really push you – compared with past years when you are dealing with large invitationals where there are lots of kids. Running those races are a lot simpler because you always have people to chase.

“A lot of these guys were never used to being frontrunners, and they have learned to be frontrunners based on their experiences this year. They have really grown a lot.”

Senior Dylan Bartness was three seconds off his PR he set earlier this season, finishing third overall in 16:32.9.

All five of those runners made the first-team All-Northwest Suburban Conference list.

Three other runners didn’t count toward the final score.

As for the breakdown of the boys race, the Falcons opened the meet in a race with Andover and Maple Grove. Totino-Grace, Centennial and Spring Lake Park were next, and Osseo, Blaine and Rogers ran in a third race. Elk River, Anoka and Champlin Park ran in the fourth race, and Park Center and Coon Rapids raced last.

Stephens said it was like running in cross country 25 years ago.

“Those of us who have been around awhile, we remember when we had to do duals and triangulars and these small meets a lot,” Stephens said. “It has forced coaches to think a little bit differently, but it also has created a little bit of a different bond with the guys that I get to work with.

“We all enjoy spending time together a lot more than we did before. We realize how critical it is to have that face-to-face interaction.”

The 6AA section meet closed the season this year with the Minnesota State High School League not holding a state tournament due to the COVID-19 pandemic.

The section includes Lake Conference powerhouses Wayzata, Eden Prairie and Minnetonka which finished first through third in their conference meet.

Stephens said that coaches call the 6AA section, the “section of death” because of how deep it is every year.