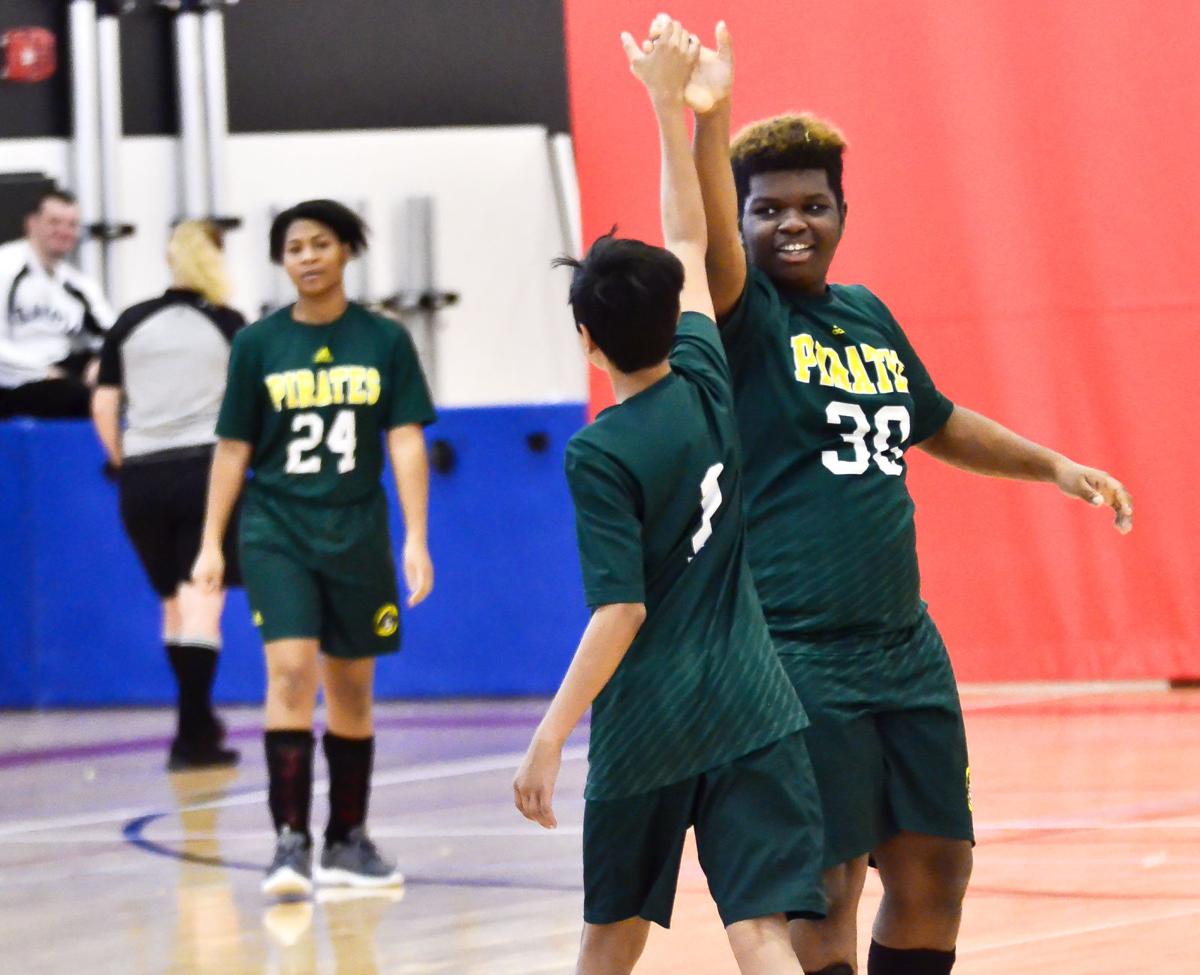 Park Center adapted soccer CI senior Rio McGrew celebrates with eighth-grader Alec Singh following a Singh goal in the second half Nov. 23 in the consolation semifinal against Dakota United at Stillwater High School. Singh and McGrew had the goals in a 5-2 loss. 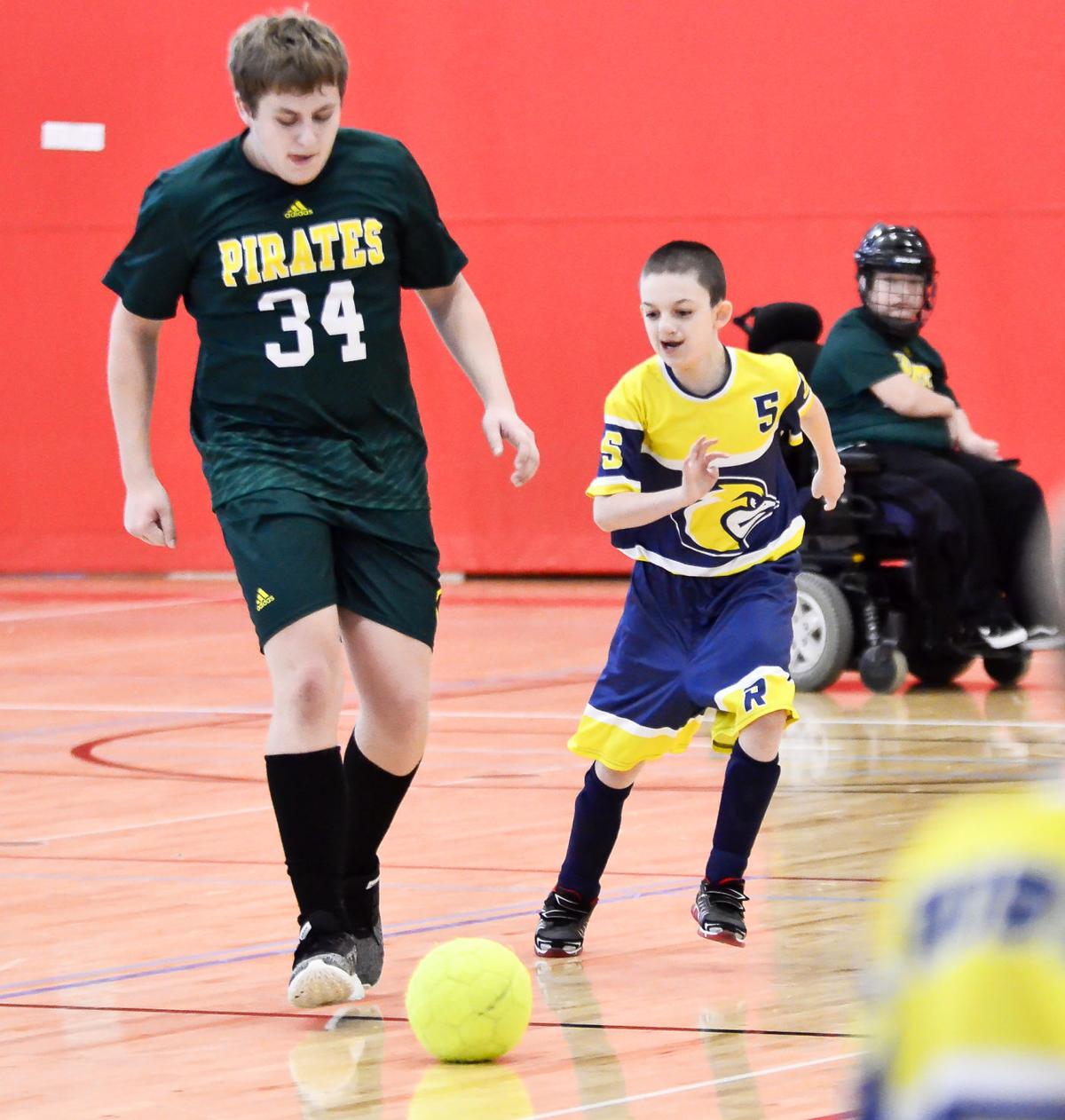 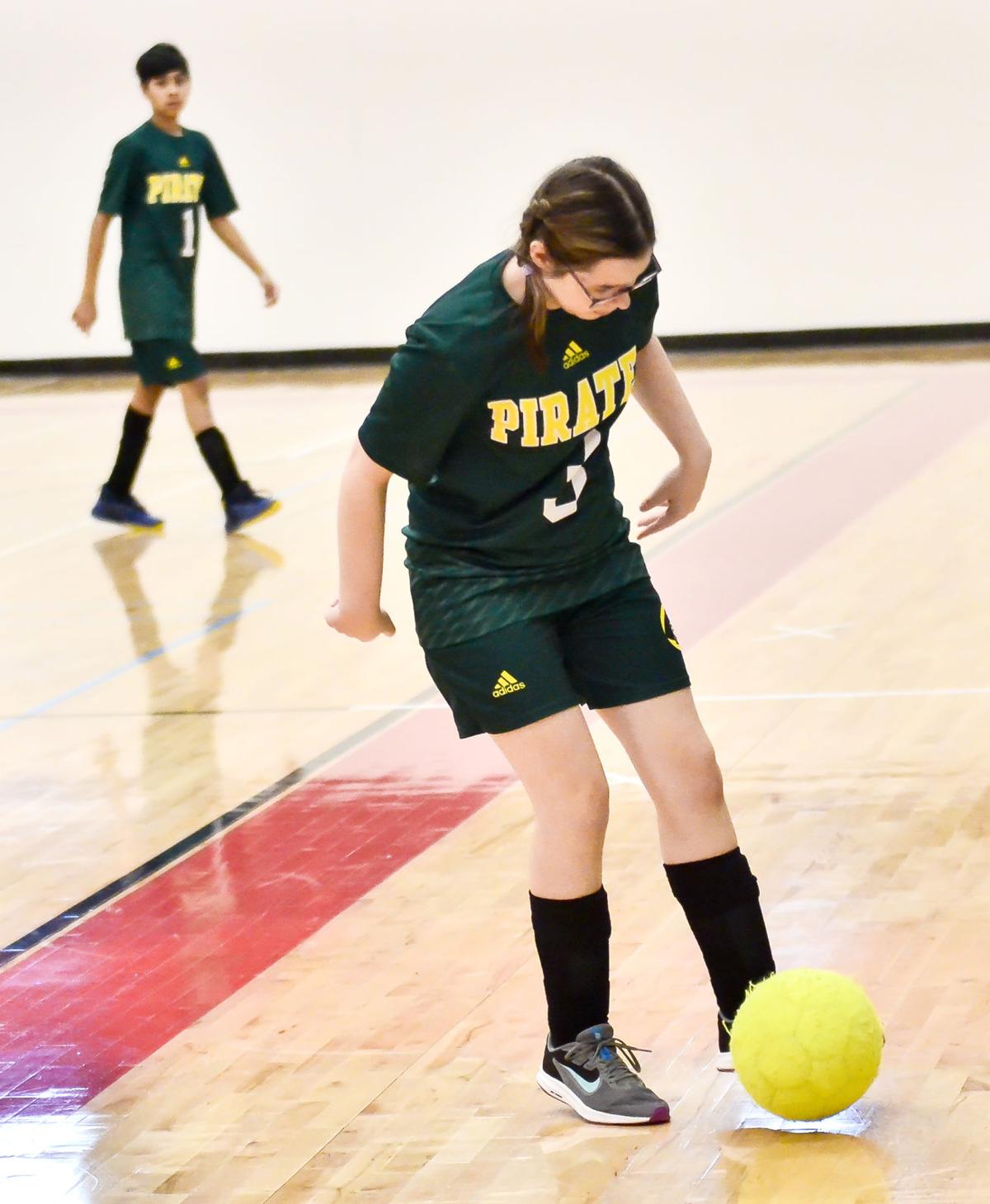 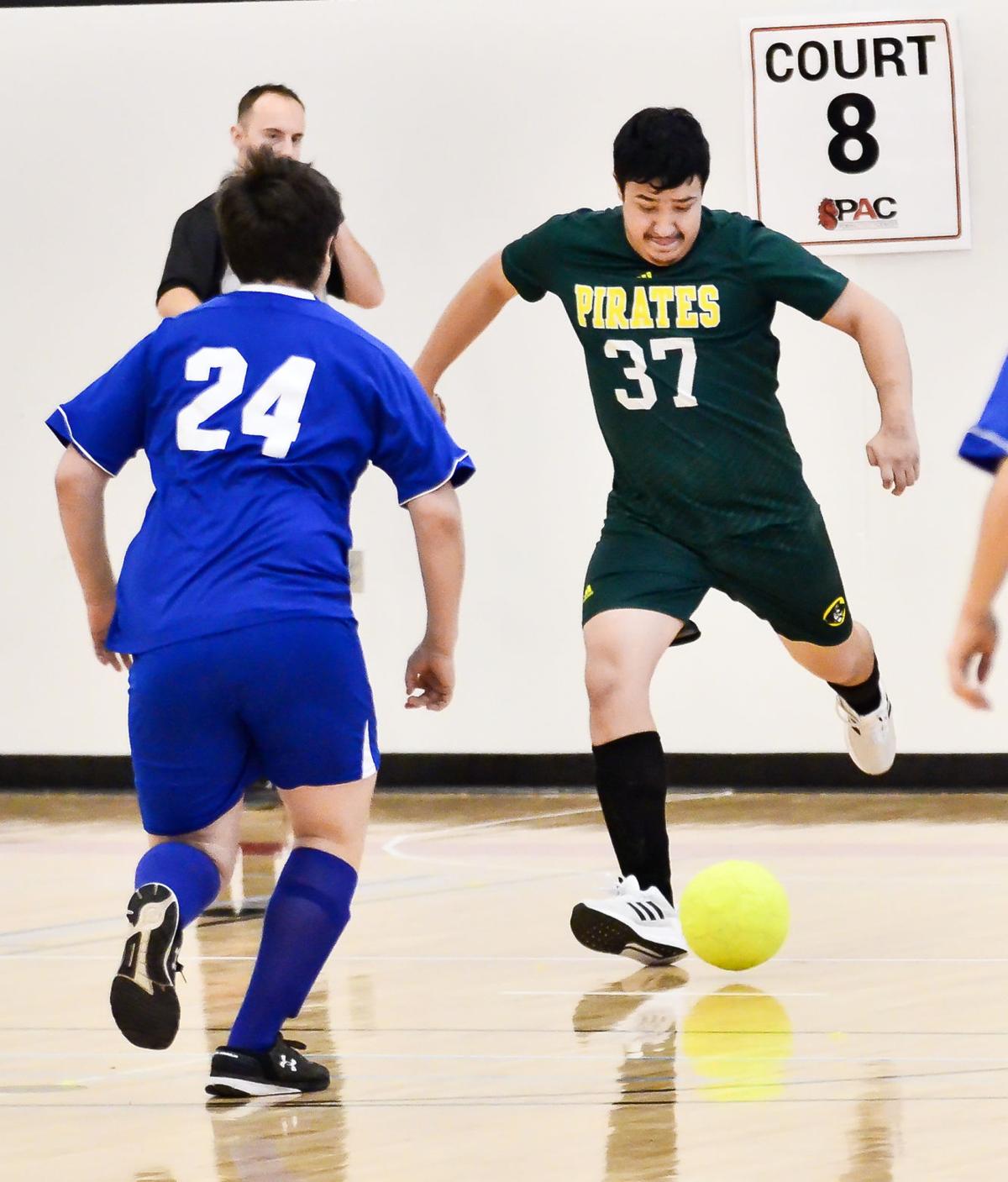 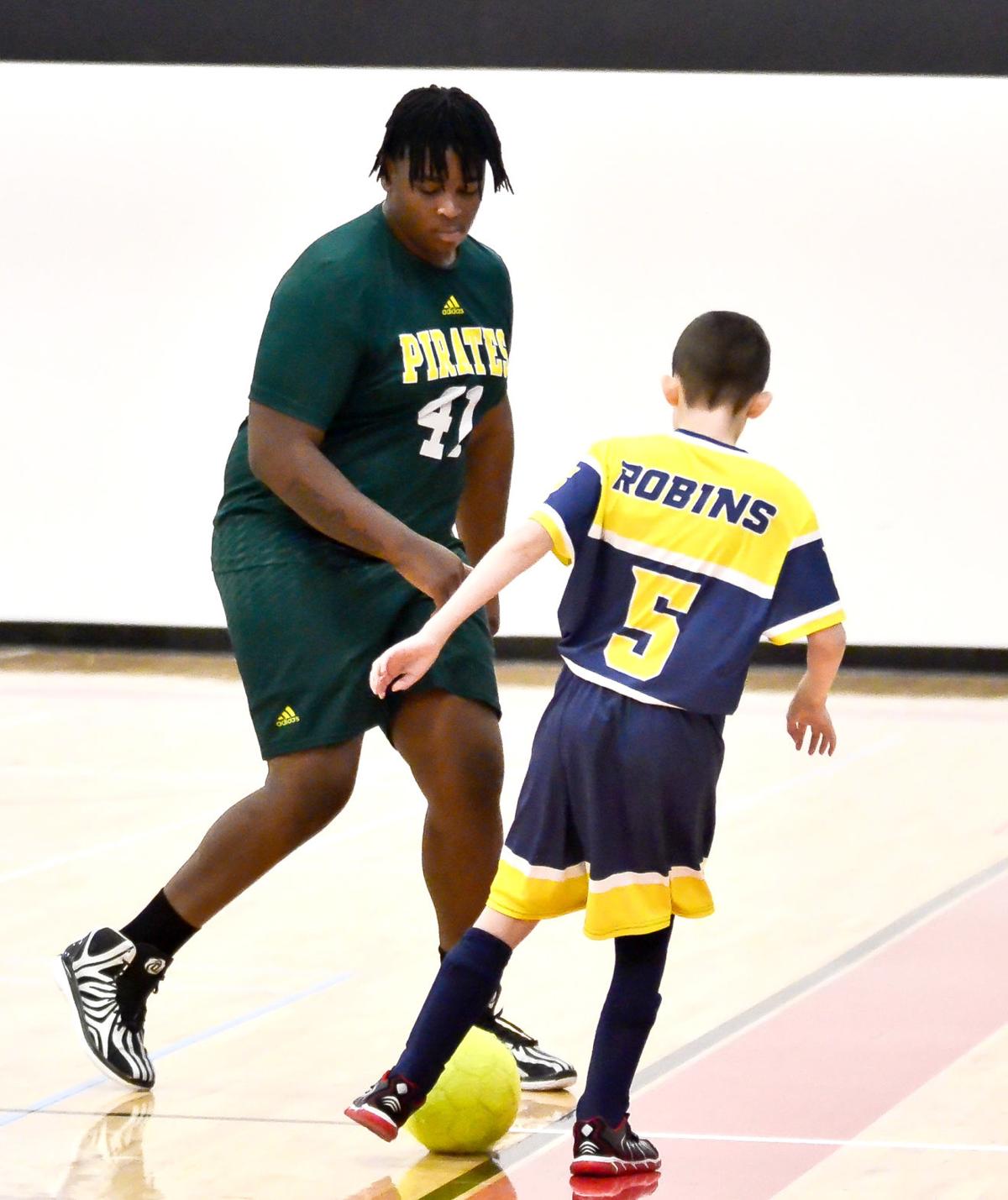 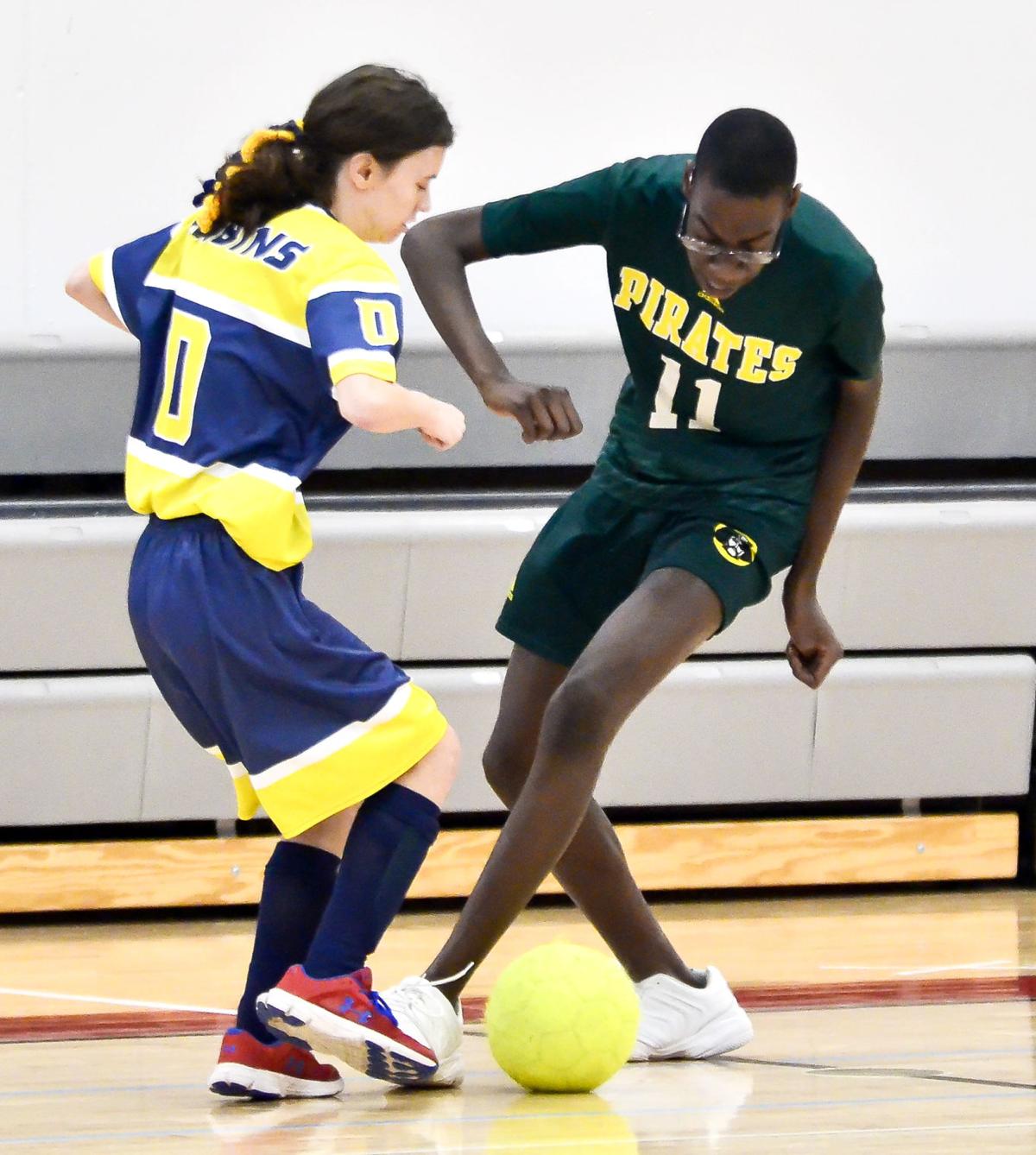 Park Center adapted soccer CI senior Rio McGrew celebrates with eighth-grader Alec Singh following a Singh goal in the second half Nov. 23 in the consolation semifinal against Dakota United at Stillwater High School. Singh and McGrew had the goals in a 5-2 loss.

Park Center/Osseo adapted soccer sent both the CI and PI teams to the state tournament Nov. 22-23 at Stillwater High School.

While both teams finished 0-2, there were several highlights for each team with the PI Pirates nearly pulling out its quarterfinals match against St. Paul Humboldt, and the CI Pirates playing tough with Dakota United in the consolation semifinal.

The CI Pirates opened state with a 5-1 loss to the South Suburban Jets on Nov. 22.

McGrew also scored a goal in the 13th minute of the first half against Dakota United on Nov. 23 in the consolation semifinal.

That made it 2-1, which is what the score was at halftime.

Cloe Kraus, Greidin Corley and Dalton Neville all scored goals in the second half to push Dakota United’s lead to 5-1, and Singh finished the scoring for the Pirates with a goal before the 10-minute mark of the second half. Dakota United went on to win the consolation title.

The CI Pirates made several nice plays despite taking the second loss of the tournament.

Junior Allison Brambilla and sophomore Miracle Kromah had shots on goal in the first half, and sophomore goalie Jesse Cardoso-Ramires made several saves.

Dakota United came in as a much larger team, subbing players in every five minutes, while Park Center had to mostly play the same lineup for the entire 40 minutes.

“We’ve always talked about having fun is the main thing to do the best,” Eggers said. “And these kids really do that. I mean they play their hearts out and show great sportsmanship. We are a small team, and they come together very well.”

Eggers, who is a first-year head coach after Kelli Waalk retired last year, said it was exciting to experience state.

“It was a great opportunity,” Eggers said.

The PI Pirates were tied with eventual runner-up St. Paul Humboldt at halftime on Nov. 22, but they fell just short of making the semifinals with a 7-5 loss.

That set up a tough matchup with Robbinsdale/Hopkins/Mound Westonka Nov. 23 in the consolation semifinal. The Robins came into the tournament as a top seed after going 10-0 in the South Division this season, but they were upset by Rochester in their quarterfinal match.

Park Center fell behind 3-0 early in the first half with junior Sam Roles scoring twice and adding an assist to seventh-grade forward Santana Washington.

But all-conference junior center Kirby Gilbertson put the Pirates on the board with a penalty kick. Gilbertson and junior forward Josh Kimber each had shots before the goal that were saved by sophomore goalie Lucas Harper.

Brady made it 5-2 Robins a little later, but Gilbertson completed the hat trick with another goal to cut the deficit to 5-3.

Robins’ seventh-grade forward Micah Bomgardner made it 6-3 before halftime, and Roles added two goals and eighth-grade forward Jayda Johnson scored another in the second half.

Senior Demont Bowie did have a shot on goal late in the second half, but it was saved.

Sophomore all-conference goalie Josh Klick had a few saves in the first half, and Gilbertson was the goalie in the second half.

The Park Center/Osseo adapted CI and PI soccer teams are both in the state tournament Nov. 22-23, at Stillwater High School.